comments Share
You are reading
Rage of Bahamut – iPhone Review

Recently, I mentioned getting an iPhone – which was sorely needed since my old phone was dropping calls and the touch screen stopped responding to… well… touch.  That seemed problematic.

Of course, one of the things I was most excited about was getting some portable games to lay on my iPhone while out and about too.  I have gotten a chance to play several of late, and I plan to toss out some quick reviews on them here and there.  The first one I want to write about? 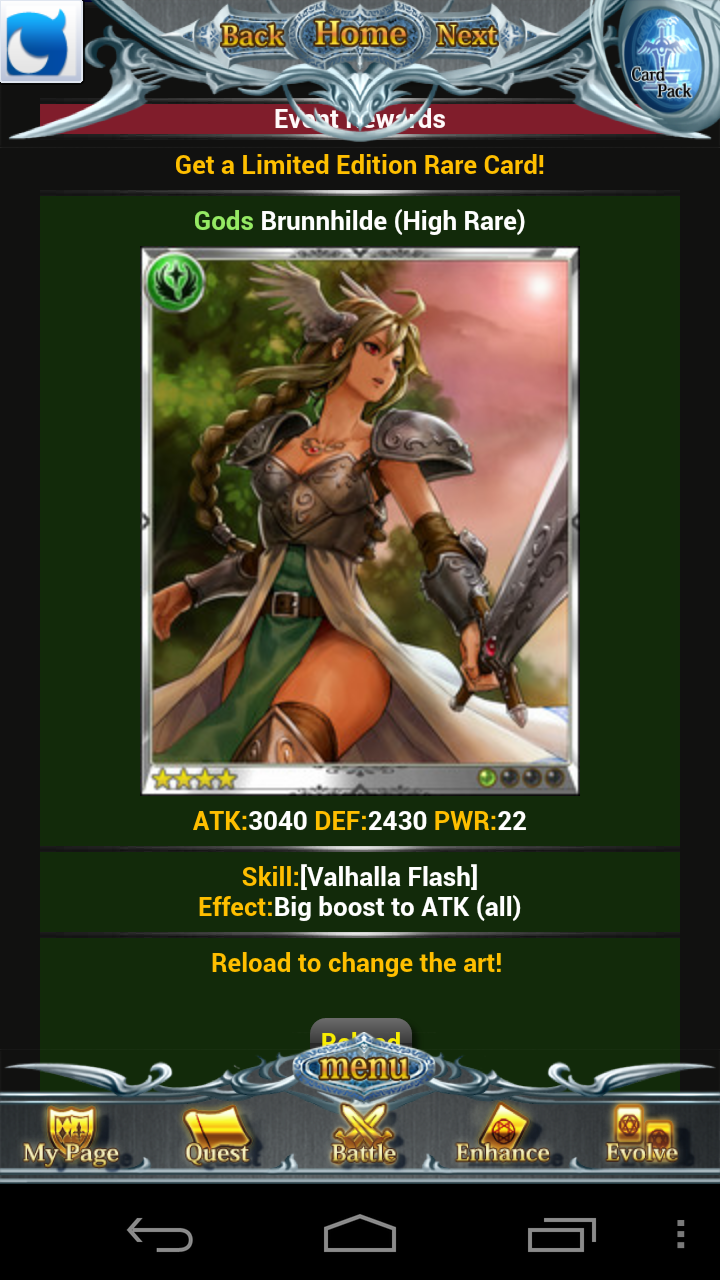 There are a couple of types of games that I suspect are going to play very well on my iPhone – and that would be old-school RPG’s and collectible card games.  Since I am a huge fan of both, I’m pretty excited about those two prospects.  One of the first two CCG’s I tried out was the incredibly popular Rage of Bahamut.

At first I expected something a bit more like Magic: The Gathering, but really it is an entirely different kind of animal.  You still get single card ‘packs’ where you get random creature cards for various things.  However, the game is really broken up into a trio of sort of mini games.  The one I spend the majority of my time with is ‘Quest’ which is pretty straight-forward.  You see a screen with an enemy, and you bug-zap it and get coins and experience.  Each enemy you kill drains some stamina.  When your stamina runs out, you have to wait for it to replenish.  There are freebie items you can get in the game that restore it, and in true freemium game style, you can purchase these as well to speed up the process.

As you work through these levels, you wind up in boss fights, which make up a very limited secondary type of mini game where you and the boss character take swings at one another until one of you dies.  It is probably the least-engaging part of the game, in my opinion.

Then there is the online component, which I did not undersatnd at first.  Asside from your stamnia, with regulates how often you can roll against the quest creatures, you have an attack value.  This value is a bit trickier – your cards all have different values to them.  At their core, they have attack and defense, though rarer cards have special abilities as well.  They also have a power value, which is what they cost to play. 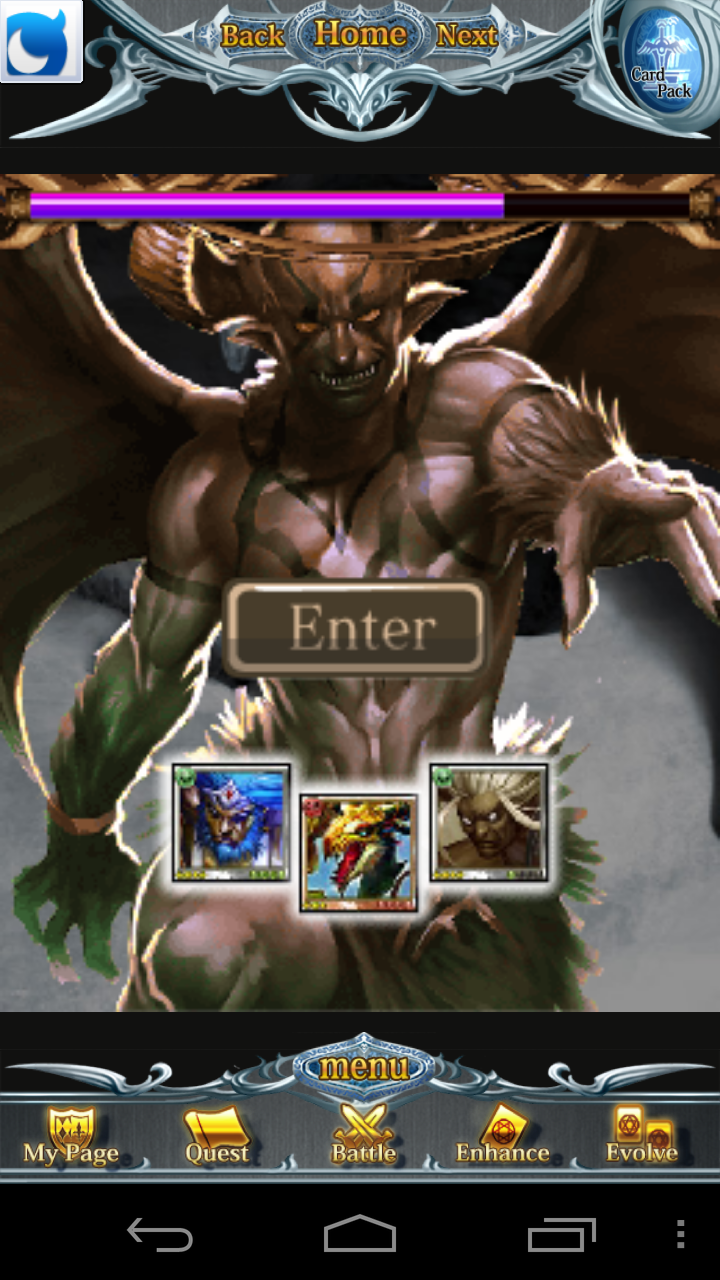 The more powerful the card, generally the more power it takes to play.  You can have up to 5 different cards combine to defend or attack.  This is important, because as you level or add friends, you gain more attribute points, which you distribute between attack, defense and stamina.  Basically these broaden how many and how good of cards you use at a time.  Why attack one another?  Well, for one you can take items from someone, which is handy because full sets of a type of item allow you to unlock a rare card.

If it sounds like there is a lot of strategy at play here – well, there is.  On top of that, the way cards are handled is pretty nice.  Most cards can be ‘evolved’ – which is to say 2 of the same card can be merged to create a more advanced version of that card.  You can generally do this 3 times, creating a rarer version of that original card.  On top of that, you can ‘sell’ cards for more money, or enhance better cards by using lesser ones.  There is a whole lot of number crunching going on here, but I like it quite a bit.

The art on the cards is really nice, though I don’t hear any sound at all when I play – I’m not sure if that is intentional, if it’s a problem with my install of the game or if it’s something to do with my phone.  Really though, I usually keep the sound down on my phone except when I’m at home, so it is not much of a big deal to me. 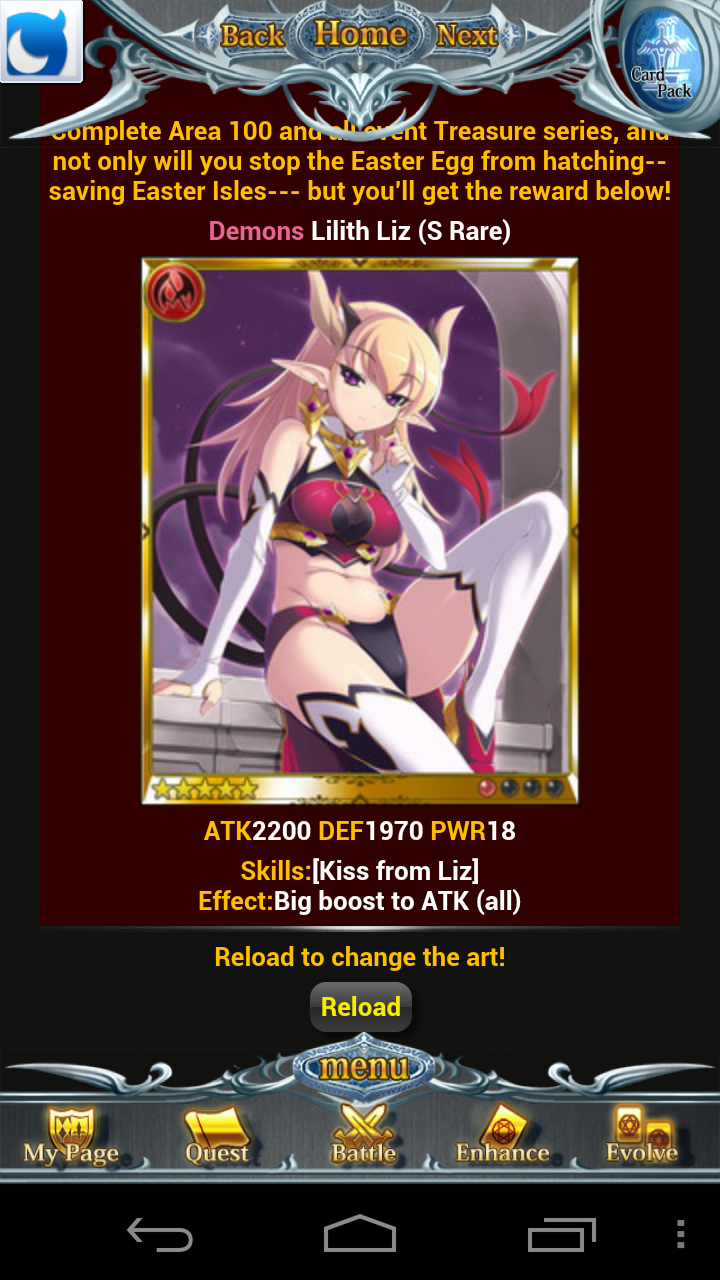 The game is designed to get you to spend money, but there are a lot of decent free options in there too.  Communicating with other people in the game, signing up with a referral code:

There are some online events and things you can do like tweeting once a day – and so on – to get some more freebie cards, which works out nicely.  It will be interesting to see if I’m still playing in a month or two, but so far I have found Rage of the Bahamut to be a pretty addicting little CCG and have been playing it quite a bit so far.