I hope you all had a great weekend. I certainly enjoyed mine as I got lots of gaming in and got to hide away indoors from our dark, gloomy weather. This morning the skies are still incredibly dark over here, so I decided to go with the dark wallpaper image and kick off the first of my 3 ‘darkly themed’ game reviews this week – Infamous.

I am not always a big fan of sandbox games.  In RPG’s where I can grind for experience and items, it is a bit easier on me than the GTA or Red Dead games which I can fully appreciate on a technical level, but just never seem to get into enough to want to spend more than a handful of hours on them.  So, when I picked Infamous up, it sat on my shelf for awhile.  I knew the scores were good, but I just was not sure about how much I would enjoy the game. 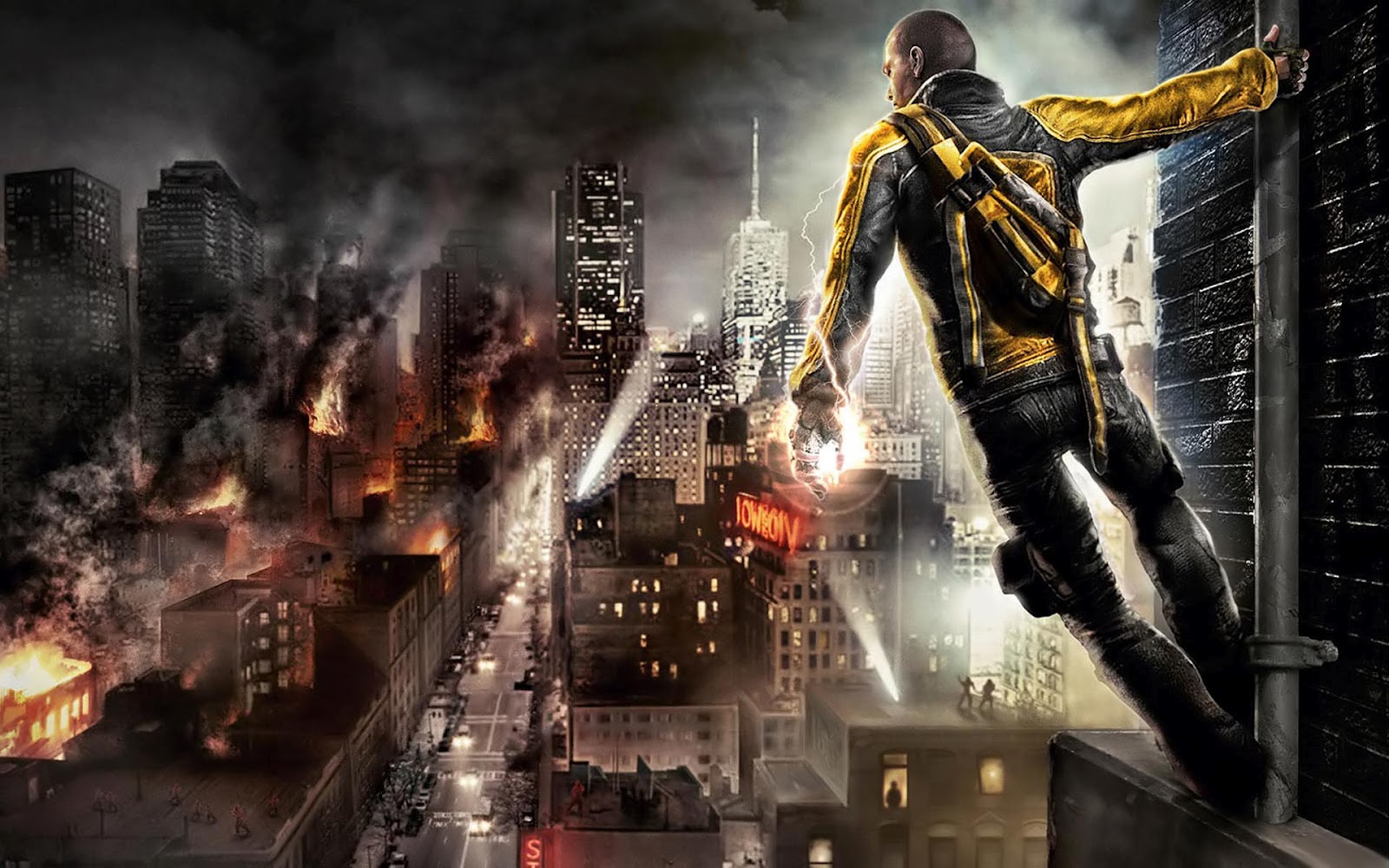 My son actually started playing it first, and the more I saw of it, the more I became interested in the storyline and the leveling/progression system.  When Infamous 2 came out to solid reviews, and my son started to ask for it, I decided that it was past time I gave the original a chance – and I’m glad I did.

So, what is Infamous?  It’s primarily an open world action/adventure game.  But it has a little bit of everything thrown in, with RPG elements like leveling and making choices that affect your character’s progression, there are plenty of platforming elements as well as the basic exploration and combat.

The story starts with your protagonist, Cole, delivering a package that goes off and causes both considerable destruction, but also for Cole to gain superhero-like powers of electricity. 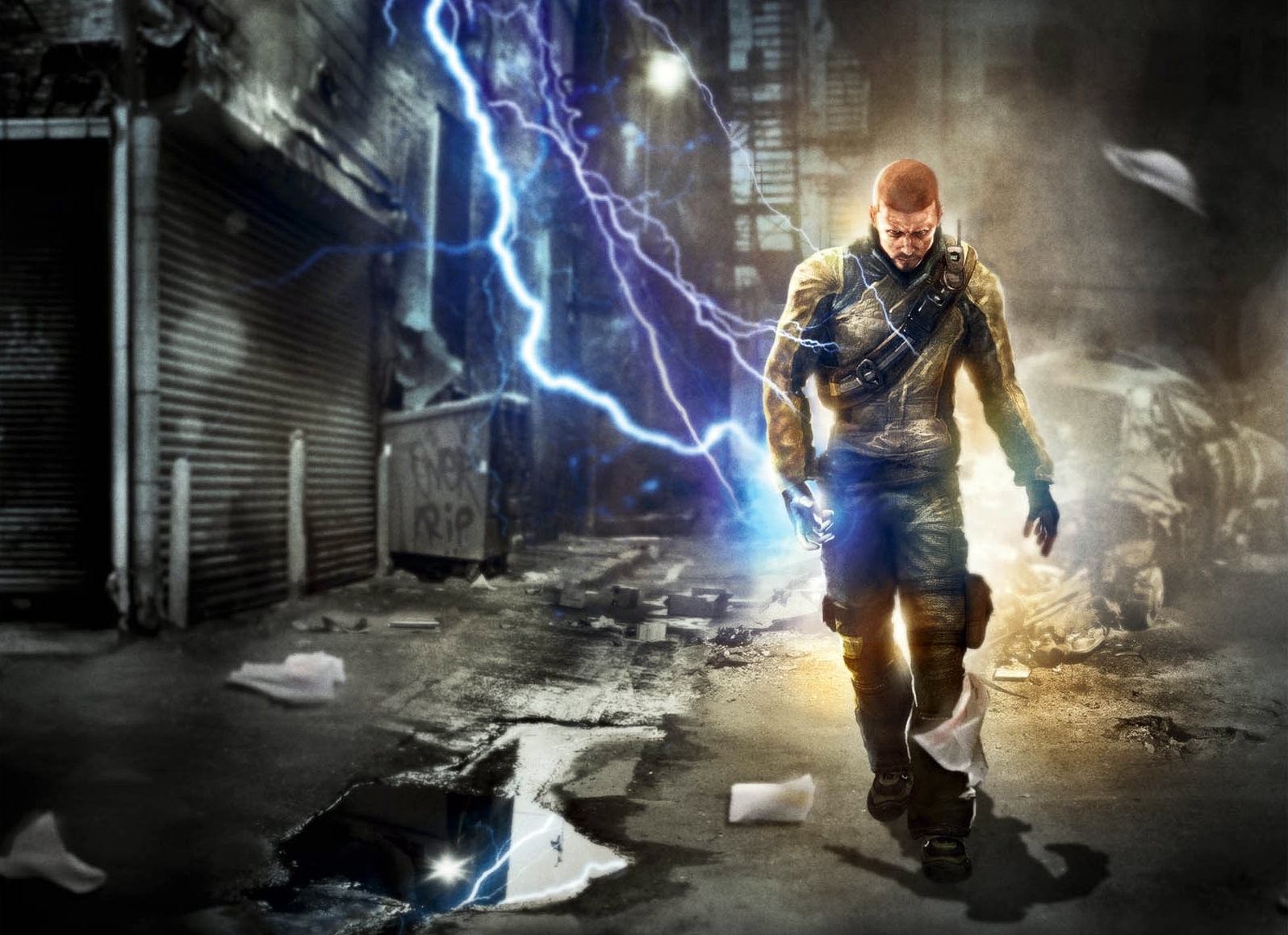 By now this game has been out for a few years and obviously games have come out since that make better use of the PlayStation 3’s power.  That being said, this is still a pretty good-looking title.  The color scheme is a bit muted and drab, but that goes along well with the storyline and scenario, which is one of mass destruction.  To that end, there is some excellent detail and the environments can often look pretty cool – especially when you take Cole to a high vantage point.  There were a few glitches where characters would freeze up or get hung up on landscapes – things like that – but more often than not the visuals were well done. 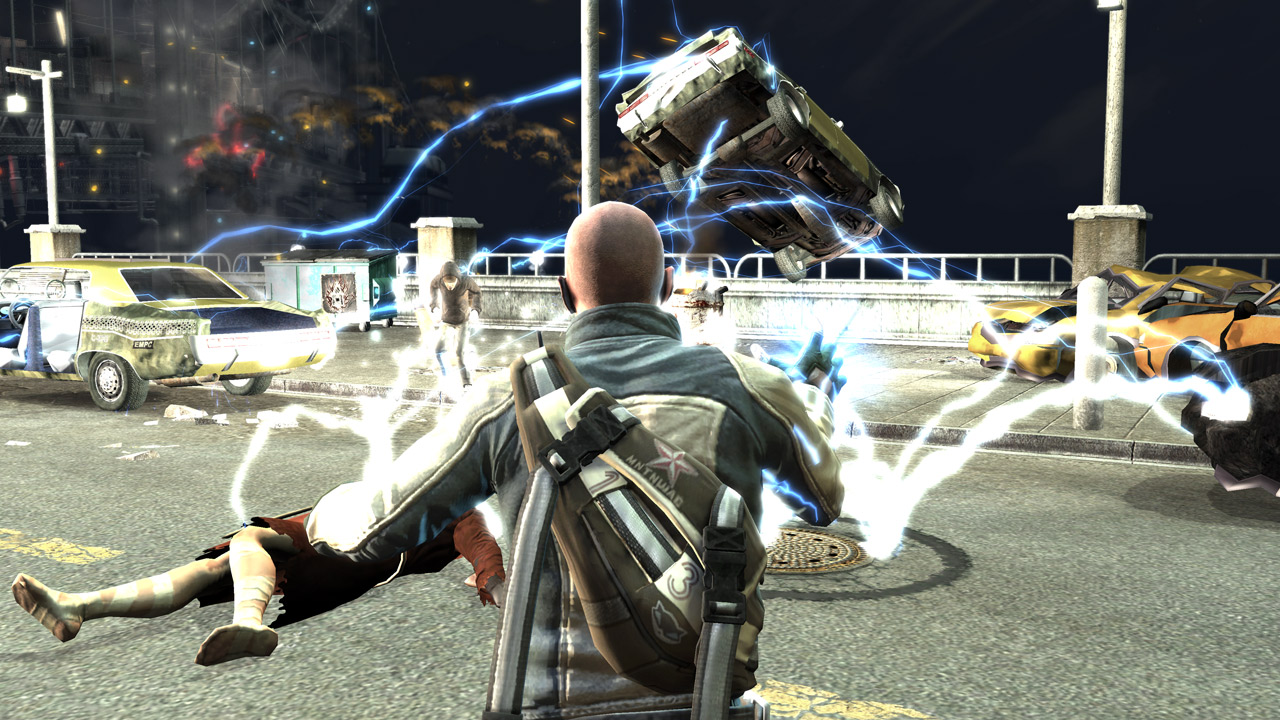 I thought the sound design and music were both really well done.  The ambient effects blended with the soundtracks while people in the crowd continually talked and added a sense of life to the game.  Most of the voice acting was pretty solid too.  I recall when this game came out, there were quite a few people who did not like the deep/gravelly sound of Cole’s voice actor, but I personally had no problem with him (although if I’m not mistaken, he does get replaced in Infamous 2). 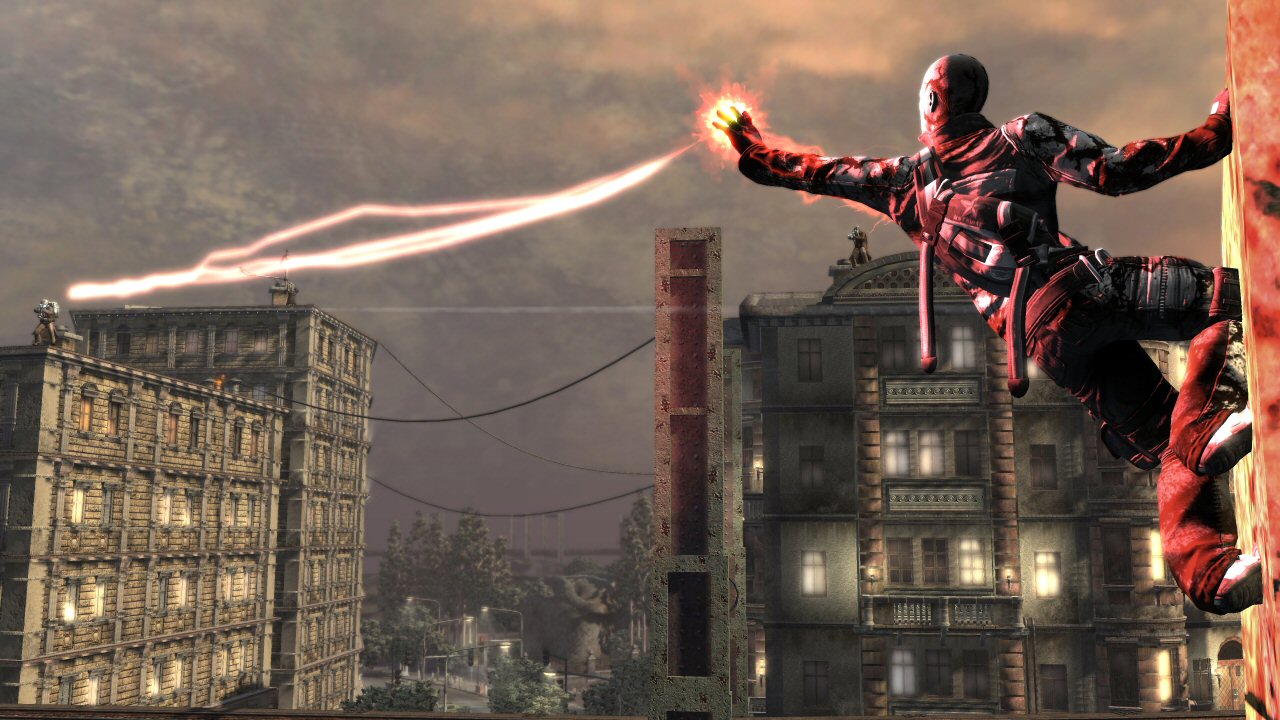 Gameplay – 9:
Maybe the reason I can’t get into GTA or Red Dead’s sandbox worlds is because travelling by car or horseback is just nowhere near as cool as grinding down trian tracks and electrical wires while vaulting off of skyscrapers and taking flight to reach the next rooftop.  This is more Spiderman than Red Dead Redemption, and it works.  I really dug the leveling system, including the karma choices.  Sure, they are a bit cut and dry – you’re either being really good or really bad – straddling the line in between doesn’t do you any favors from a progression standpoint.  What is neat though is depending on whether or not your Cole is a good or bad person, your unlockable abilities may differ as well.

Combat is fast and fluid, if sometimes a bit imprecise.  Still, I felt like a badass by the end of the game, taking out combinations of thugs, turret guns, exploding monsters and more all at the same time.  I know that it was harder for me to stay ‘good’ than bad, simply because a lot of my favorite attacks had a tendency to take out nearby citizens.  Oops.  The map is also well handled.  You have access to a lot of quests and it is generally easy to see not only where you are and have been, but need to go next.

Probably my biggest gripe with the quests was the one where you have to follow the bad guys, but can’t be spotted, but can’t lose sight of them for too long.  This game was really not meant to be ‘stealth’ and i found myself getting spotted from angles that seemed like I really should have been in the clear. 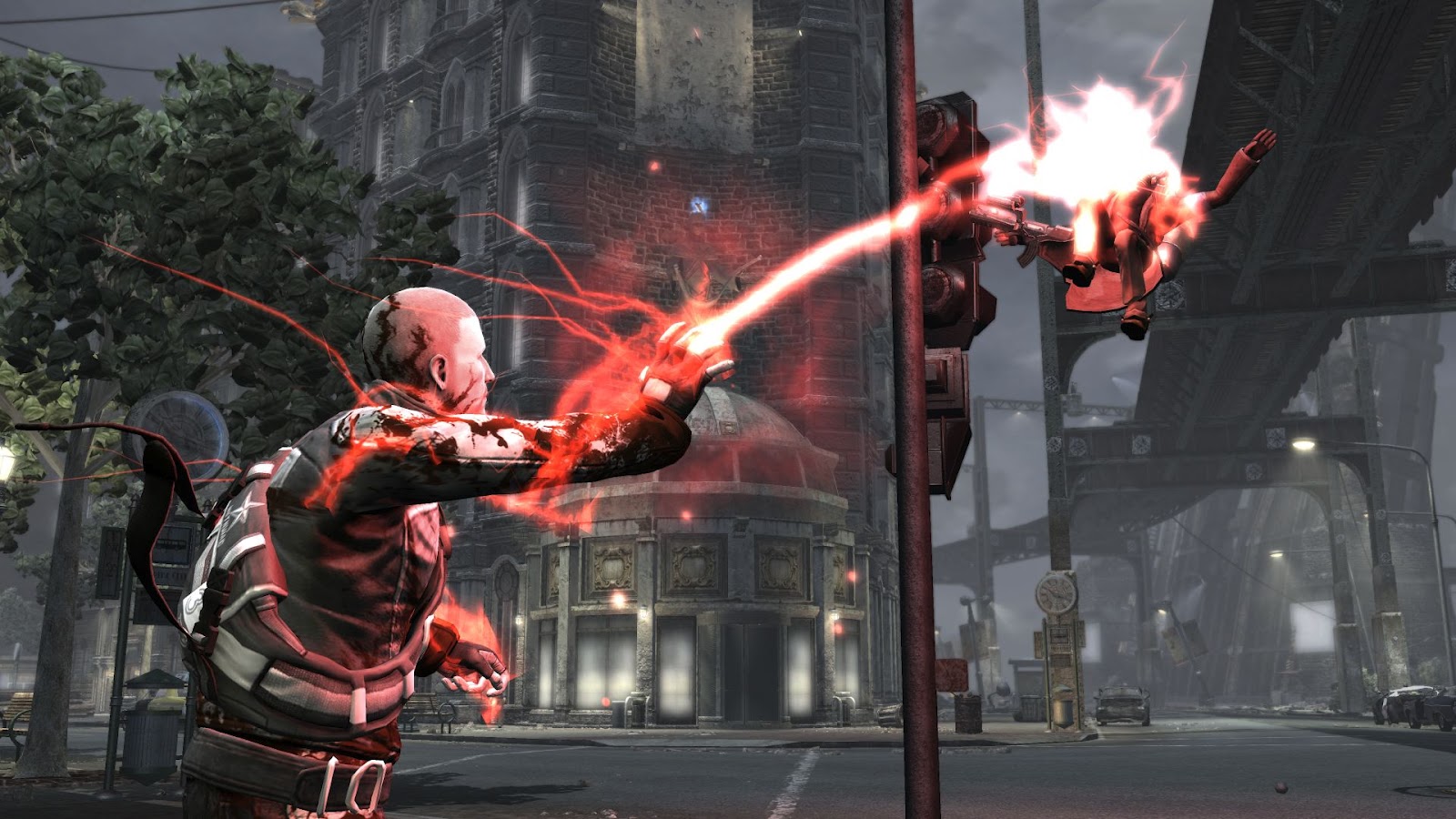 The fact that there are all these quests, that Sucker Punch created this active, living world all wrapped up in a cool comic book style storyline really drew me in and kept me playing for days straight until I beat it.  The core storyline did not take me a terribly long time to beat.  I think it was around thirty hours, but with the two sets of karma abilities and trophies that reward going both good and bad, there is reason to play through the game twice.  Oh, and the ending was awesome.  Great twist that vaulted it near the top of my favorite video game endings list (if I had such a list.  Should I make such a list?)

There are also collectible games nestled into the primary gameplay that give you more to do when you have beaten the game. 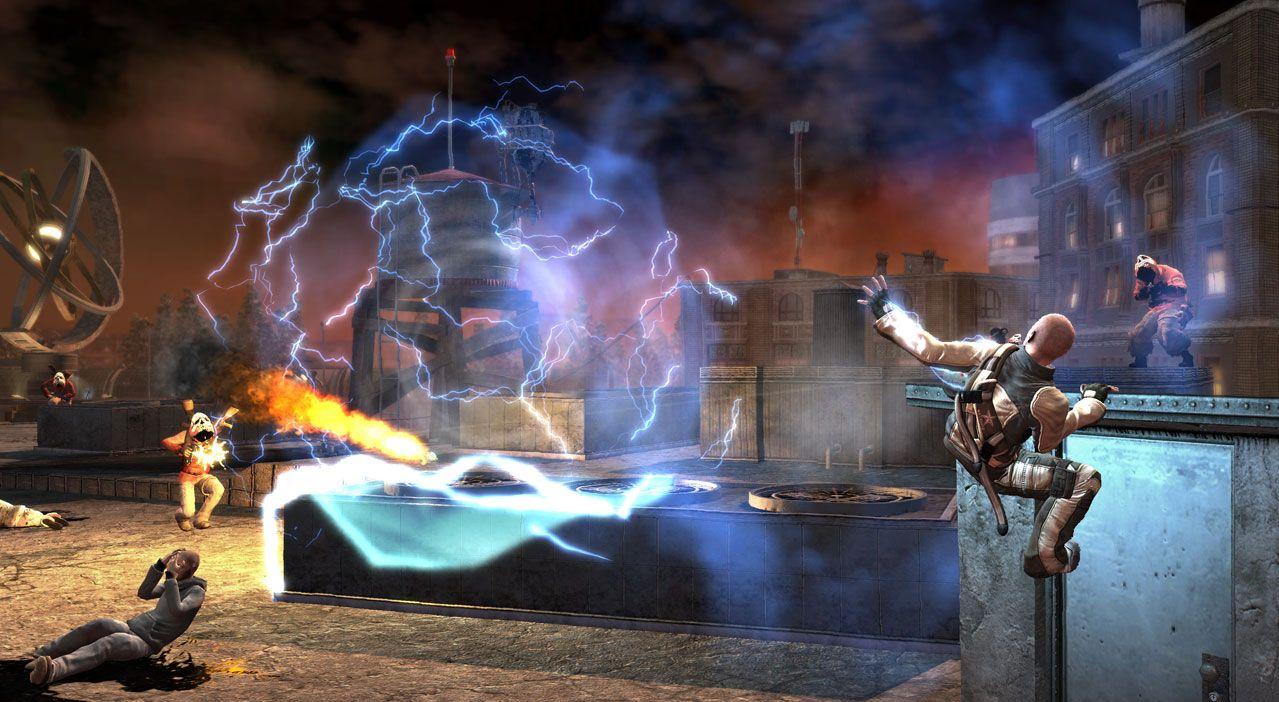 For me to enjoy a game this much, from a genre that usually does not excite me very much, I feel confident in saying that Infamous got a lot more right than wrong.  I did in fact pick up the sequel for my son for Christmas, and while I have not gotten to it yet, it is near the top of my backlog and a game I am looking forward to playing sooner than later.  Consider how cheaply you can get Infamous now (I’ve seen it for as little as $6 used), if you any of the things I have described appeal to you and you have a PlayStation 3, I would recommend picking it up and giving it a try some weekend. 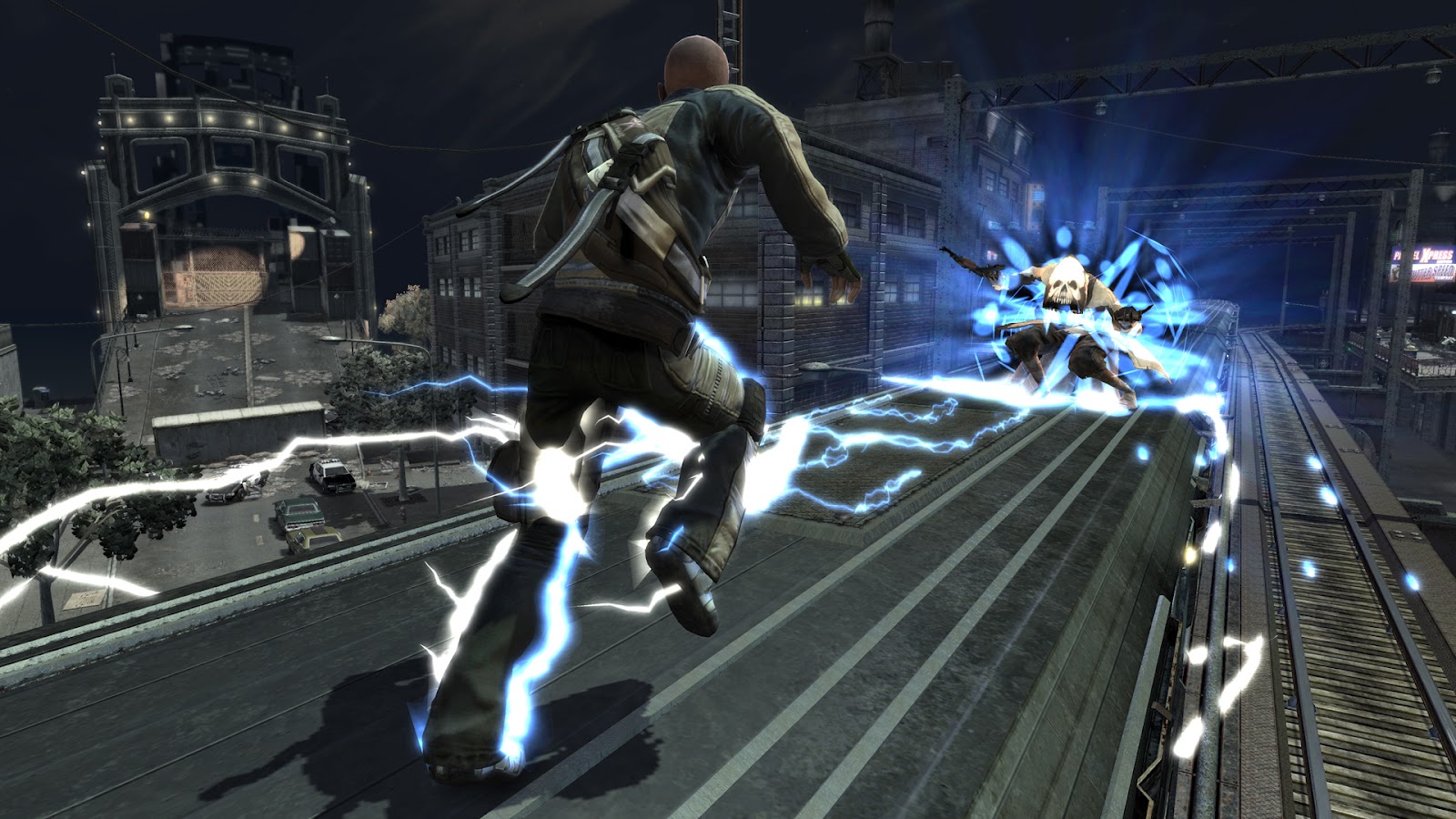