comments Share
You are reading
To the Moon – PC Review

I had heard of To the Moon, but never really looked into it much. I recalled a couple of friends stating that they thought it was a different, unique game – but given my usual backlog of titles, I never got around to picking it up and trying it.

Then, just before the holidays ol’ 8-Bit Nick (I’m going to link to his site, even though he has not posted in a while. Hopefully he will see this and suddenly be inspired!) gifted this to me on Steam. With the whole purchasing excuse out of the way, the only thing I really had left to overcome was making time for it. Then I wound up with about a week off of work around New Year, and that excuse was gone as well. 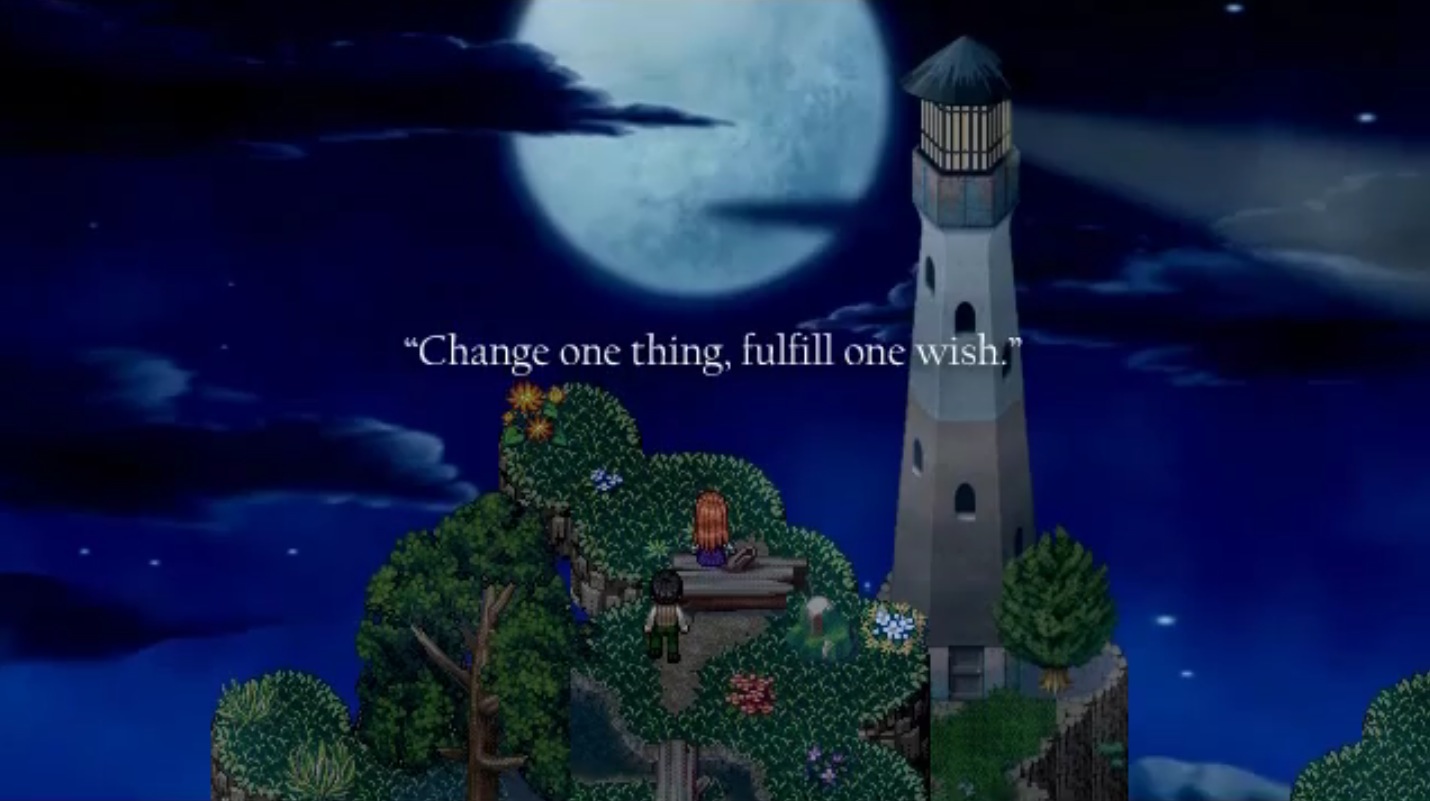 To the Moon was an interesting game for me in several ways. The basic storyline is that you are controlling Dr. Rosaleane and Dr. Wyatt, who work for a company that works to change the memories of a dying person – to allow them to live out a final, unfulfilled dream or request.

This may sound like a spinoff of Inception, but honestly the story is much deeper and has a satisfying conclusion. The two doctors arrive at an elderly man’s house, whose final request is to go the moon. Of course, this is not an easy process – it requires that the doctors learn about their patient as they delve back into the mind one era at a time, pulling back the blinds slowly but surely as they try to find the right spot to implant this change in the patient’s memory. Only then does the patient’s mind truly latch onto this change, and eventually build new memories that, at least in the patient’s mind, allows them to reach their goal.

This leaves Dr. Rosaleane and Dr. Wyatt on a journey through their patient’s mind as they attempt to not only understand why his dying wish is to go to the moon, but to figure out the best way to make this a reality to him.

To go any further into the storyline would be a disservice to this game, so instead I will now touch on some of its more technical qualities. 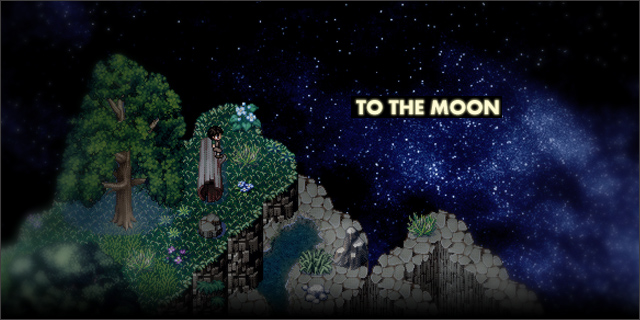 The first thing that jumped out at me when I played this were the visuals. Not because they were groundbreaking or amazing – but because I recognized them immediately as being largely part of the RTP package that comes with RPG Maker XP. I have spent years on and off again using that software, and I knew without a doubt within moments that was the engine used to craft this game. As such, there is nothing here that would not look right at home on say, a 16-bit console you might be playing an RPG on.

Still, being so familiar with the engine, I was able to really appreciate how much work went into the visual design here. True, the basic characters and environments were more or less created, but the mapping, lighting and sprite animations were incredibly effective. There have been RPG Maker releases since this one (VX and VX Ace), and while they certainly have their advantages, RPG Maker XP is easily my favorite engine visibly. This game backs that belief of mine up.

This is obviously no Final Fantasy XIII or Call of Duty title – this is an indie game created with a Maker program. Maybe the visuals will not carry so much impact for everyone, but they hit a sweet spot for me. 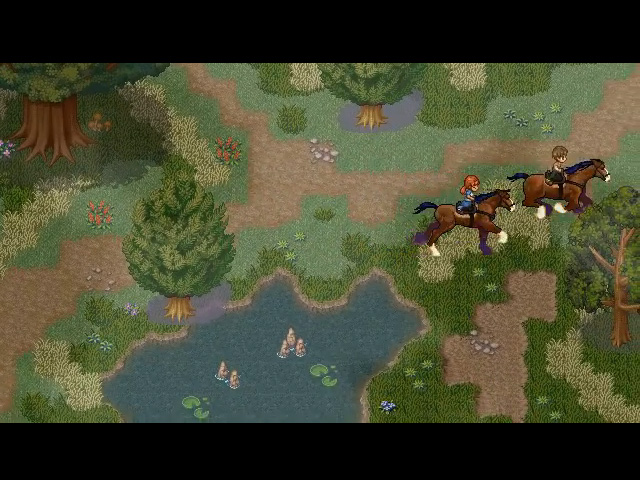 The sound is only average really. You interact with things here and there, but you are not getting any kind of voiceovers. That is alright though, because the music in this game is incredible. A couple of the slower pieces reminded me of slightly older Final Fantasy games – and that is a compliment as Final Fantasy has in the past had some of my favorite pieces of video game music. If the music was simply pretty, that would be nice – but it compliments what is happening in the game beautifully throughout. 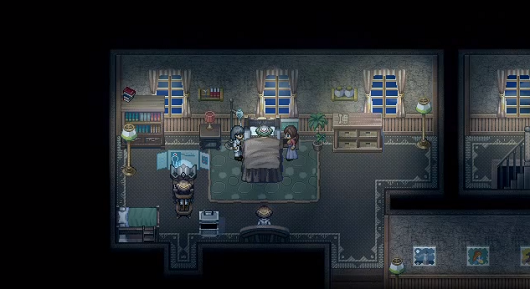 While saying this game was built in RPG Maker XP is accurate, calling it an RPG really would not be. There is very little actual gameplay here. What I mean by that is you do not fight things (though there is an amusing scene where you almost fight something RPG-style), gain experience or gold, buy things or really have much in the way of challenge. There are a couple of mini-game elements plugged in near the very end, which I actually found clever because I again recognized the scripts (I actually had used several of the scripts and even conversed with some of the people who coded the scripts used in the past, like Sephiroth Spawn, back when I was working on other projects in the community) and thought they were well implemented. 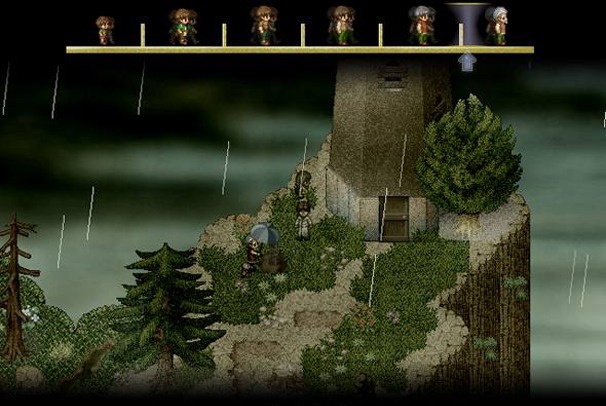 I will get the bad out of the way quickly here. To the Moon is short – I think I beat it in about four hours. On top of that, there is no real replay value to speak of (unless you maybe want to go back and try to catch a couple of ‘ah-hah’ moments as more of the storyline’s intricacies are revealed). You will eventually beat the game – you essentially hunt and click on things in your environment, making it more of an adventure game than an RPG. The length however, really does not bother me. There is almost no extra padding, or wasted time. I appreciate that more than walking endlessly just to tack on an extra fifteen minutes here and there.

The story however, was excellent. There were some interesting, even difficult topics taken on in it and it is very easy to see how this could turn into more games (which is apparently the plan, though I admit it will be a challenge to come up with another equally impactful storyline). 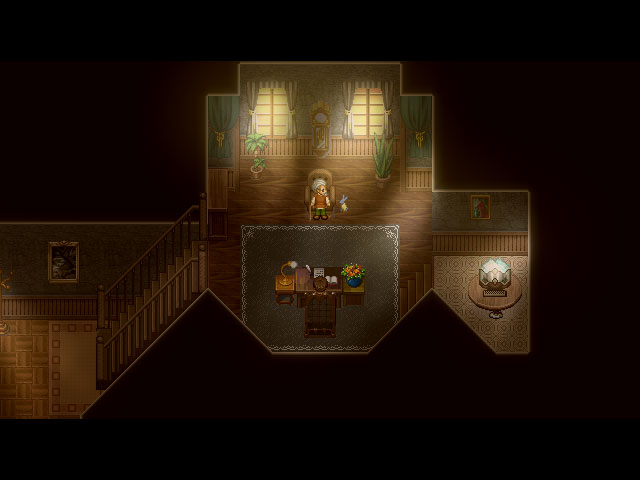 This score can feel a bit misleading, but it largely depends on what you look for in a game. For me personally, it was probably an 8 or a 9 – but your mileage may vary. My son for example got bored of it almost right away. Apparently he needed to shoot something instead.

If you are looking for hours of RPG grinding or something action-packed, this probably is not going to suit your needs. however, if you want to participate in an excellent, moving story for a relatively low cost (this can be purchased off of steam for $9.99 right now), then I think you will find a lot to like here. I almost never got around to playing To the Moon – but thank you 8-Bit Nick, for making sure I did. 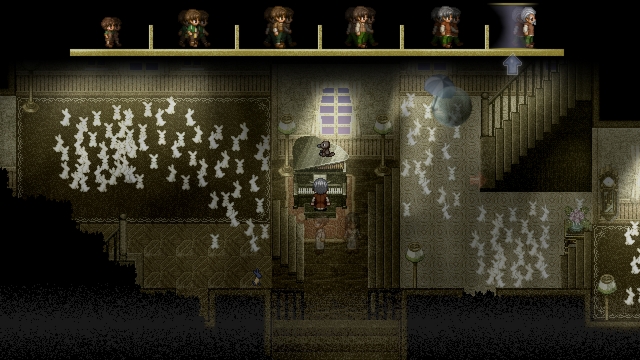