It is sort of fitting that a game that mashes together several different game ideas into one would name itself based on a food that blends several different ingredients together. It turns out, I am a big fan of both, because Guacamelee! is a challenging, entertaining mix of platforming and adventuring. 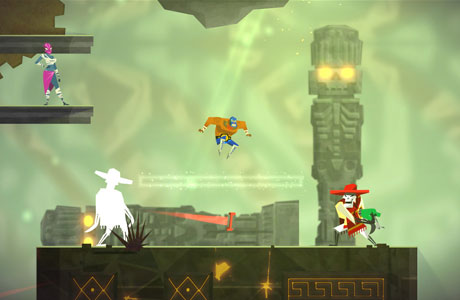 You assume the role of Juan, an everyday guy who just happens to be in love with the daughter of El Presidente. Unfortunately for everyone involved, a crazed villain from the world of the dead has abducted her and plans to sacrifice her so that both the world of the dead and living will be merged into one, and he can rule over both.

This is silly, but entertaining stuff. There are all kinds of references to memes and other video games throughout. Some are pretty obvious, such as when an enemy taunts you that the princess you seek is in another castle, and others are background sight gags in the form of posters or signs (Casa Crashers was among my favorites). 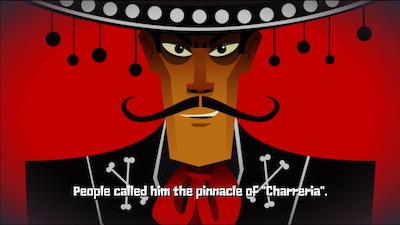 About as sharp of a PSN game as I have seen, and it looks great on both the PS3 and the Vita. The game never stutters and slows, even when there is a lot going on. there is plenty of detail in the characters and environments, and the designers made great use of parallax scrolling. While the backgrounds themselves are not very heavily animated, they move in different layers (as well as a layer of foreground items that cast shadows over some parts of the screen) giving the world a deceptive sense of liveliness while maintaining a smooth framerate throughout. 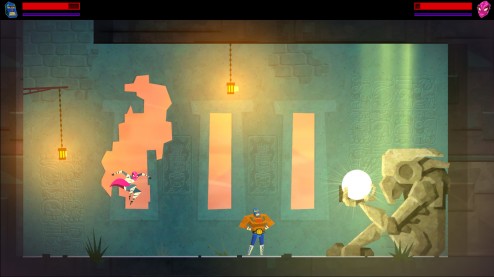 The music is best described as distinctive. It completely fits the theme and setting of the game, and you get different tracks depending on if you are in the world of the living or the dead. If you are in the land of the living, there is a sort of peppiness to the music, while in the land of the dead there is an appropriate ominous feeling to it. Additionally, there is a mechanic where you can bounce between these two worlds later in the game at the press of a button. This means some enemies reside in one world but not the other, and their related sound effects are sometimes more effective than any visual cues to be on your guard. 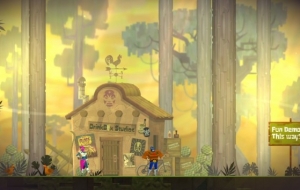 The controls are sharp – when I messed up a jump or attack, it had more to do with my inability to process buttons quickly than anything else. Three is a very handy map screen you can bring up with the select button, and a plethora of moves you learn over the duration of the game. There is this hybrid platforming/exploration theme that makes this one of the Metroidvania titles that give you plenty of reason to look around.

This is also as good of a place as any to talk about the Vita tie-ins. This game supports cross-saves, so you can upload or download from PS3 or Vita to the other very quickly. Also, the Vita supports remote play on this title (though I would think just playing the actual downloadable Vita game would look and react better). You can also use the Vita as a second controller for co-op. The co-op works really well, Vita or DualShock controller. My son tried both and we spent a few hours beating up on the game together. 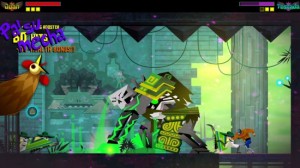 Not the longest game, but not the shortest PSN title either. You can beat it in about 5 hours if you do not bother with any of the side stuff, a bit more than that if you do explore and look for coins and power-ups. You will want to take that though – the first two-thirds of the game was pretty easy. I hardly ever died and the puzzles were pretty simple. Later in the game, the challenge spikes dramatically. You have to chain super moves together to cross tough sections of platforming, and some of the boss attacks feel a bit cheap. The final boss? Super cheap at times. If you do not invest in more life early in the game, you may find yourself dying quite a bit during the boss fights and once you get locked into them, I did not see a way out to go girnd some coins and buy some improvements for your character. 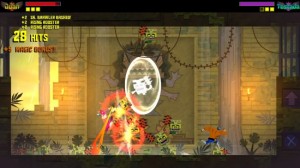 Still, despite some of the tricky platforming (seriously, there was a sequence involving a double jump, an airborne side dash, linked to an uppercut where you had to then cling to a wall, jump off of it, then switch worlds in midair to land on a platform all in about two seconds), there are generous check/save points throughout the game and your new powers and purchases do make a notable difference in how you perform in combat. 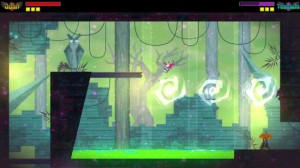 DrinkBox Studios has an excellent game on their hands. There were moments of frustration and younger/less experienced gamers might struggle to complete the title due to the somewhat punishing last third of the experience, but the audio and visual combine with great humor to make this title as appealing as possible. It is silly fun, but it is fun – especially with a friend.