When I played the first Guild Wars, I really did not know what to think. I won it in a contest and gave it a shot – but it never really resonated with me the way World of Warcraft did. 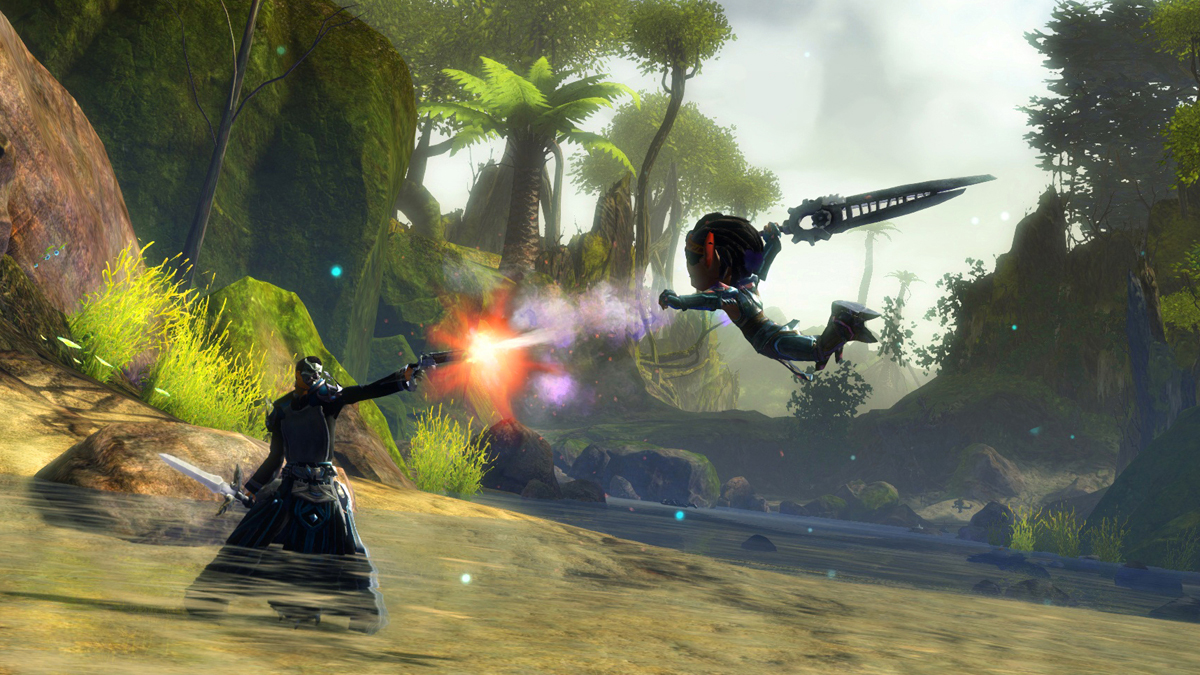 Movement felt stiff – you could not jump and combat seldom seemed terribly interesting. The visuals were bland – almost washed-out looking in places. I loved that I was not paying for it on a monthly basis, but it just felt inferior to World of Warcraft in almost every way.

I have been playing with MMO’s forever. I started playing AnotherMUD back in 1994 and then a few years later got involved with one called Realm of the Crystal Dragon. I played Ultima: Online and Dark Ages of Camelot and even gave Everquest a brief whirl. Graphic MMOs just did not stick with me, not the way MUDs did – at least until World of Warcraft came out. After that, most games were neglected for a few years. I hated the online subscription – I really did. I felt almost guilty for taking time off and not ‘making the most of my paid subscription’. I finally broke away twice, only to be lured back by some Scrolls of Resurrection from time to time.

It seems like every MMO that comes out now gets measured against World of Warcraft in some way or another. Fantasy ones like Everquest 2 make the comparisons a bit easier than something of a different theme like DC Universe Online or Star Wars – but the comparison still happen on some level. WoW has become the standard bearer of MMO success.

It took me a while to pick up Guild Wars 2. A couple of friends recommended it, and I read good things, but recalled how little I had cared for the first. Still, I finally went ahead and gave it a shot, and was very glad I did so. It reminds me a lot of World of Warcraft – but more for the good than the bad points. Character movement feels better, there are lots of quests to partake in and in general there is a lot to do. All of this, without the subscriptions. 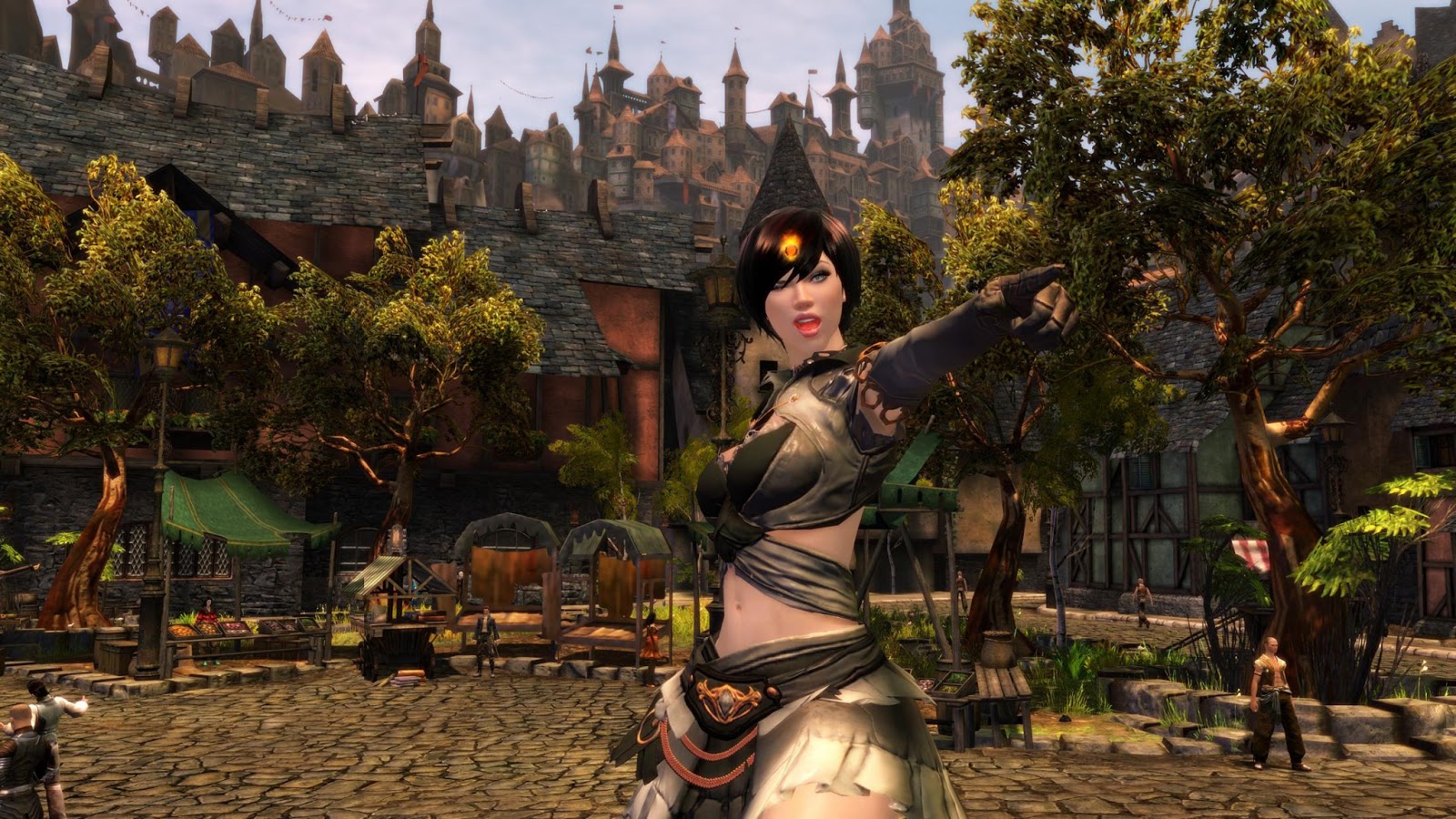 If your computer has the power to jack up the settings, do so for this game. There is some excellent detail and animation. That being said, even if your computer processing is of the more modest variety, the art direction is excellent. Some of the scenes feel like they were hand painted in, and simply look lovely. I also enjoy the brightly colored visuals. They remind me of World of Warcraft (but with more detail) and Kingdoms of Amalur: Reckoning (but with less texture pop-in). 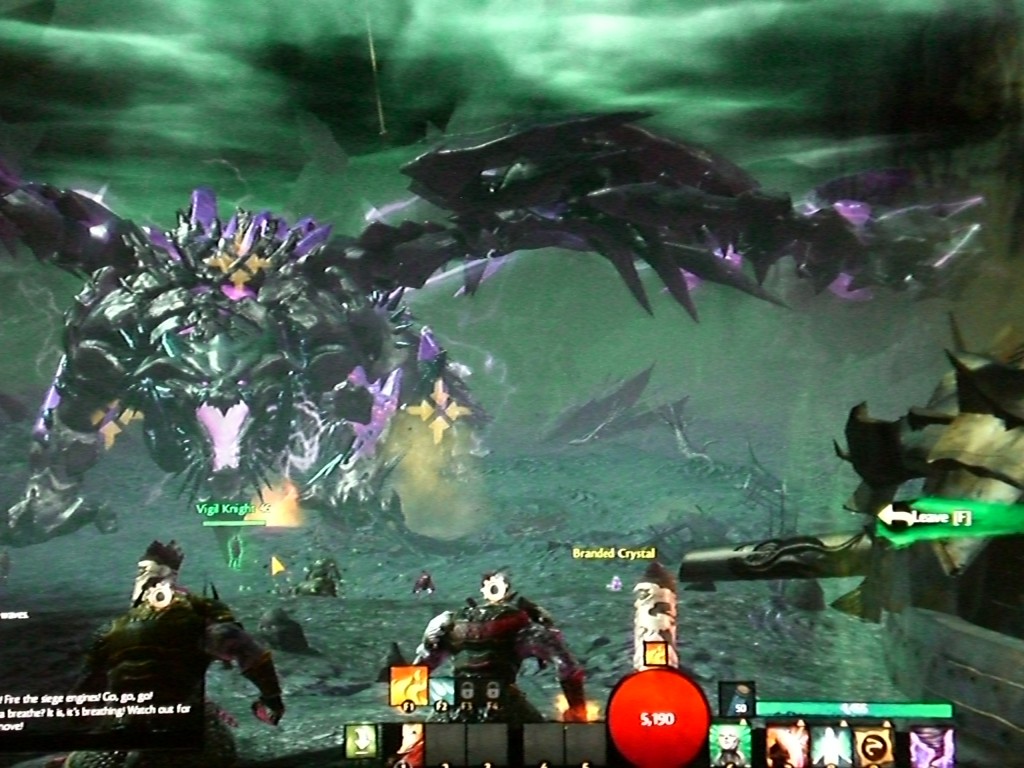 The voice acting is generally good, but not great. Still, it is used often enough that it helps to compliment the story being told. The sound effects offer a good deal of variety, which is pleasant in and of itself, but like World of Warcraft it often brings functionality to the table as well. The distinctive sound of a murloc in WoW is a sign that trouble is coming, and you have some similar events in Guild Wars 2 as well (though perhaps not as distinctive and memorable as the aforementioned murlocs). The music is excellent. Jeremy Soule delivered yet another fantasy sound track, though it does not quite reach the levels of his songs for The Elder Scrolls. 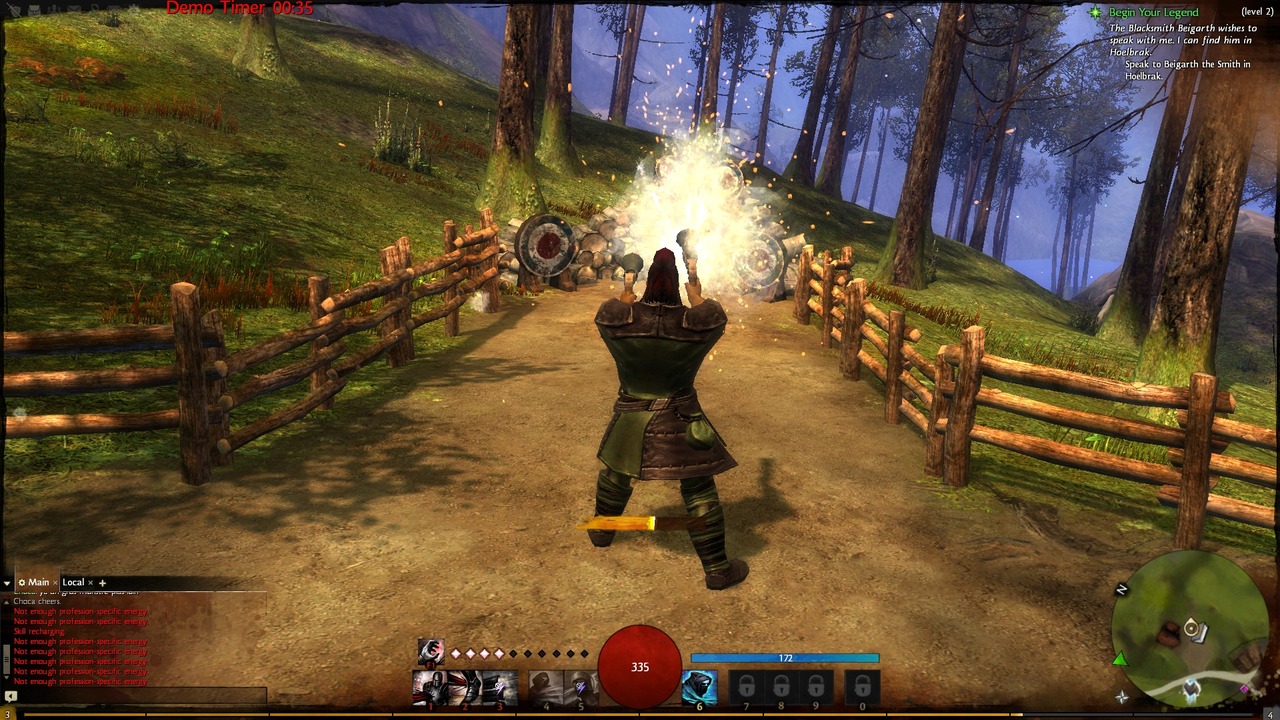 In the first Guild Wars, you were ground-bound, so to speak. You could not jump, and sometimes the smallest bits of terrain would frustrate me into having to walk around. You can jump and move much more effectively in Guild Wars 2. There are tons of menus and maps, but they are all pretty easy to navigate as well. Combat is good – if standard MMO fare. You have automatic attacks and specialized skills that have cooldown/resource management to keep you from spamming them senselessly.

Still, the controls are not perfect. Jumping in particular is not always very precise. In general that is okay, as Guild Wars 2 is not a platformer, but there are side objectives built into the zones where if you can scale to a certain vantage point, you can view your surroundings for a bit of experience and accomplishment. Here the jumping inaccuracies can become tricky at best and downright aggravating at worst.

Also tutorial information could be better. There is a ton to do or see, so I did not expect every last detail put out there in front of me. That being said, there were a lot of details I did not discover to the interface until a day or two in, that would have been useful information earlier in the playing experience. 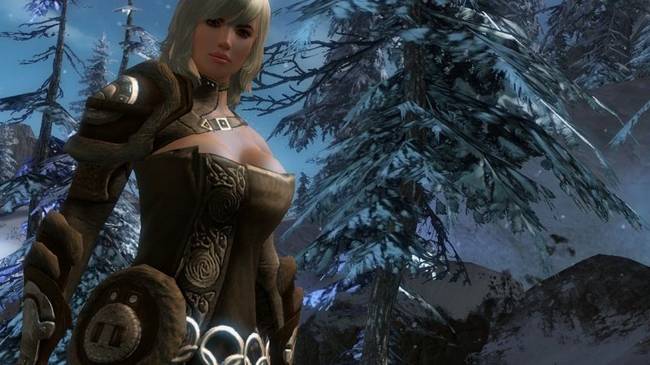 I am largely a solo MOO player. Sort of a funny contradiction I suppose, but I do not generally group, and here I never felt like I had to. I did it a couple of times so I could try the mechanics, and it all seems to work well enough, though finding groups seemed a lot easier in WoW than here in Guild Wars 2.Still, there is a ton to do. The world is expansive, dungeons generally well-designed, lots of quests, crafting and a flexible leveling system.

The quests in particular were fun, because while you have standard quests where you walk up to someone and get assigned something to do, there are larger scale events that can occur. Examples might be protecting a farm from a rash of nasty hornets or helping to escort a caravan through bandit infested paths. This helps to encourage people to work together.

There are also Player versus Player elements such as an arena and also something they call World vs World. The WvW appealed to me more than the areas, offering larger scale conflicts between people on a few different servers. There is no open PK while wandering the general environments – and that suits me just fine. Some ultra competitive players out there might bemoan this, but I feel like it makes the game’s atmosphere more enjoyable overall. 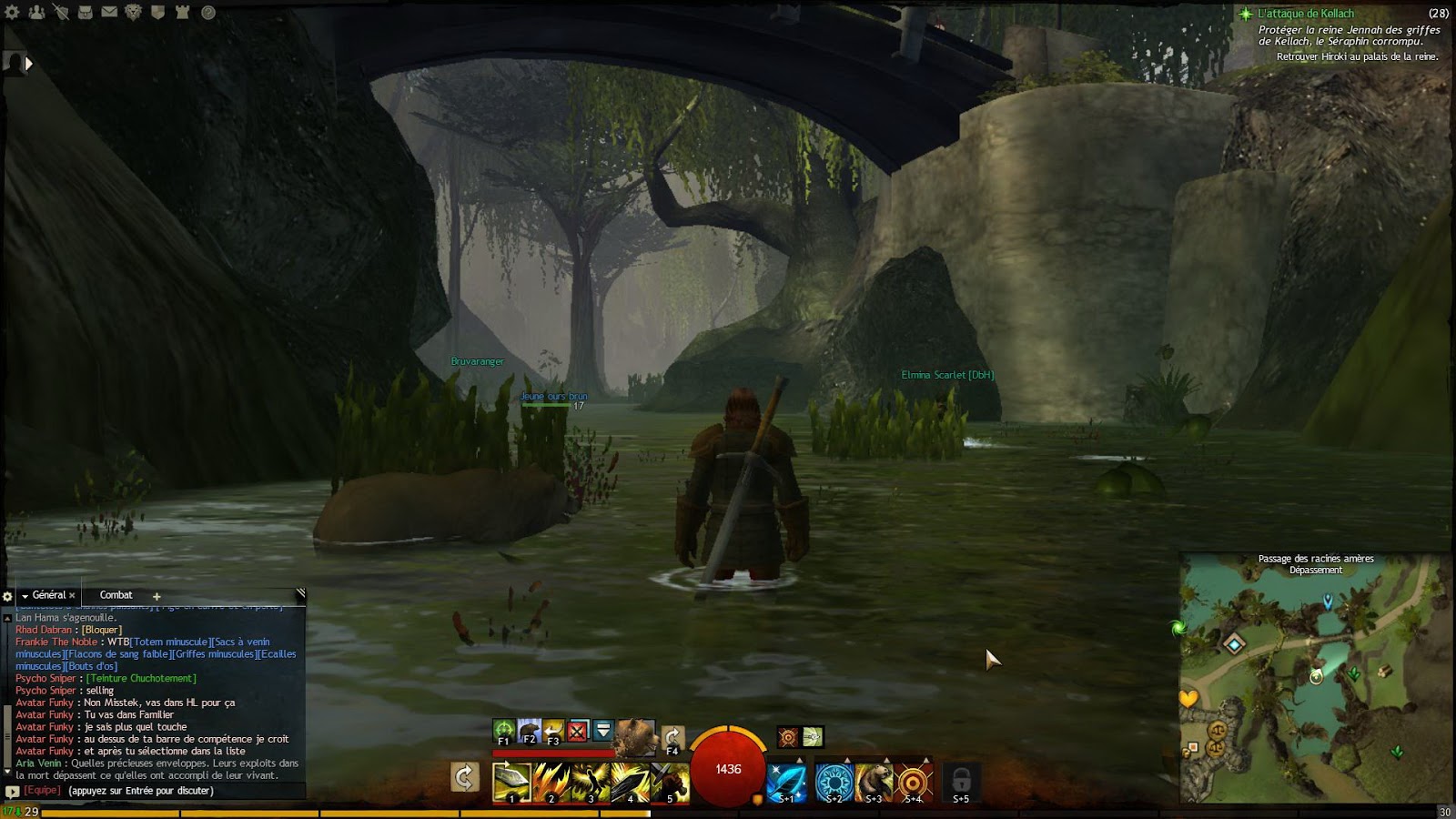 Easily the most fun I have had with an MMO in a long time. It is not perfect, but it is clear the developers did their homework and learned a lot of lessons not only from their prior games, but other franchises as well. That there is no monthly subscription helps the value immensely in my opinion. You still have to buy the game, with usually runs around $60, but I have seen it occasionally discounted on some sights for as low as $35.

Guild Wars 2 is a large, entertaining, story-driven multiplayer RPG that is a lot of fun to play. 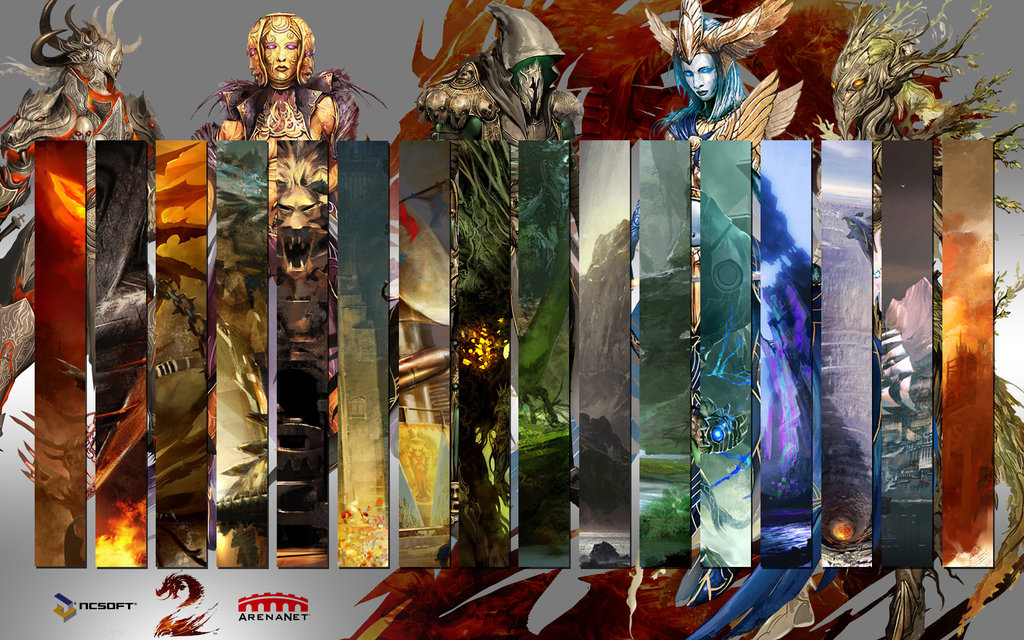