comments Share
You are reading
The Unfinished Swan – PSN Review

At a glance, The Unfinished Swan struck me as resembling another title that came out of nowhere a few years ago, Limbo. The parallels are obvious when you first glace at the games, given that both feature the player in the role of a silent young boy in a world made up of basically blacks and whites. I absolutely loved Limbo, and while I had no misconceptions that the two games were really all that alike, I was still curious about The Unfinished Swan. 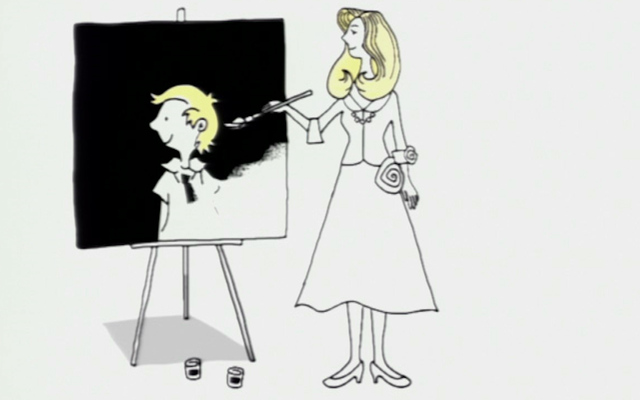 The key here, is to know what you are getting into. What you get as a fairytale-like story that abounds creativity but lacks in gameplay depth. When you start the game, you are dropped into a completely white environment. You have a button that can make you jump, and you can use the triggers to hurl blots of ink. As the ink lands, it starts to ‘paint’ anything it comes into contact with. This gives the world in front of and around you shape, and since it is all handled from a first person perspective, the effect is actually very immersive. 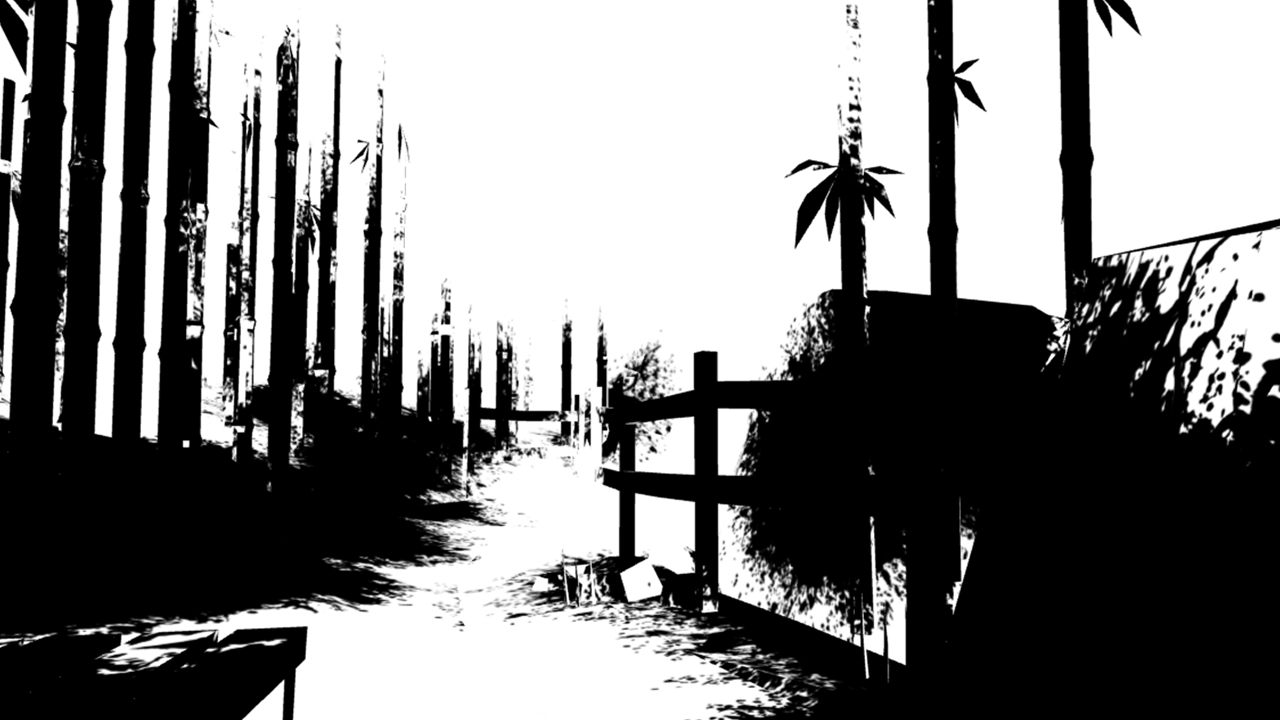 Most of this score is dedicated to the style of the game. Really the cut scenes are pretty basic, and there is not a great deal of environmental texture and detail to be had. Animation is generally fairly simple. However, it is all used to excellent effect. Your blots of ink stain the world around you, giving it a sort of tangible shape as you navigate it. Some of the game’s sites are actually pretty impressive. I recall when I first played this, my oldest daughter was sitting next to me, and I reached a point on a building where I could look back and see all of the blots I had done around the landscape while finding my way. It was a very nice little effect that really made me feel like yes, I was impacting this strange world around me. There are later stages as well, where you help make vines grow and walk through a dark forest littered with strange, red eyes. These little touches were quite welcome also. 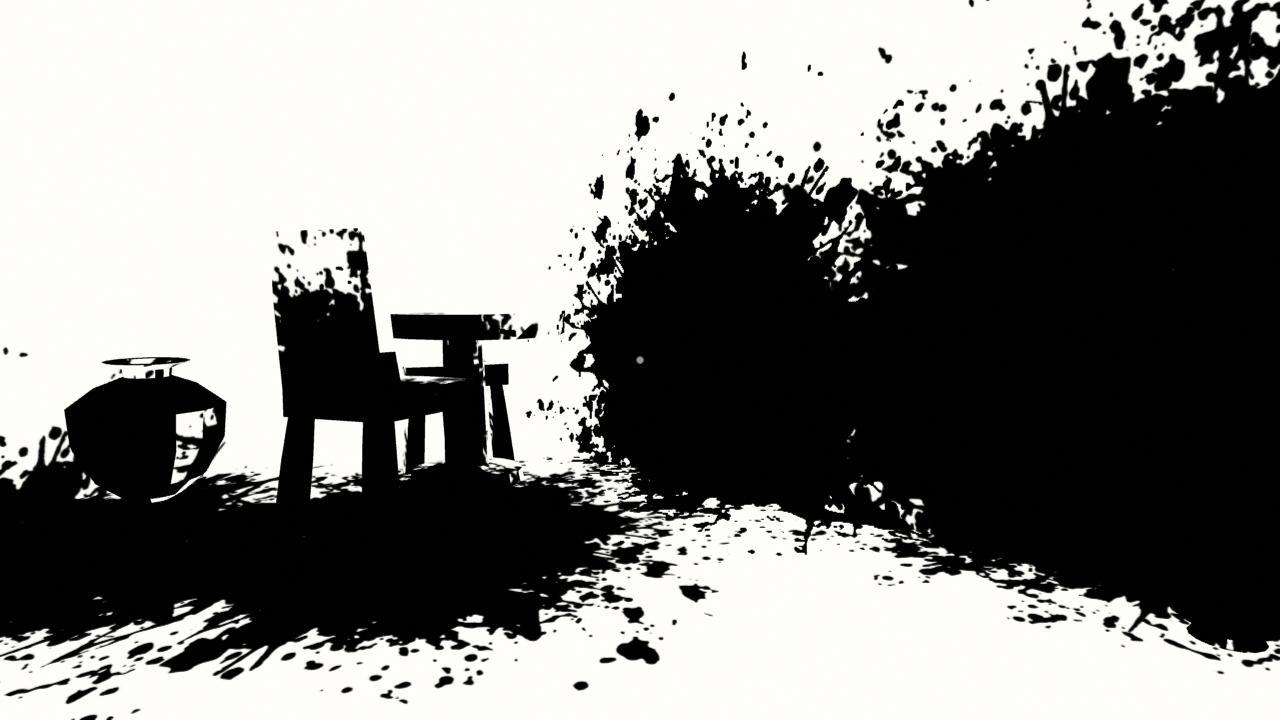 The music is very pleasant and just feels like it is in perfect harmony with the way the visuals are presented. There are a handful of voice over moments that are well-done, but the game’s sound effects are rather sparse. When they do occur, they stand out all the more because of this, and maybe it is done to help lend that sense of isolation in the world, but the relative lack of variety and use made for some audibly spartan periods of time. 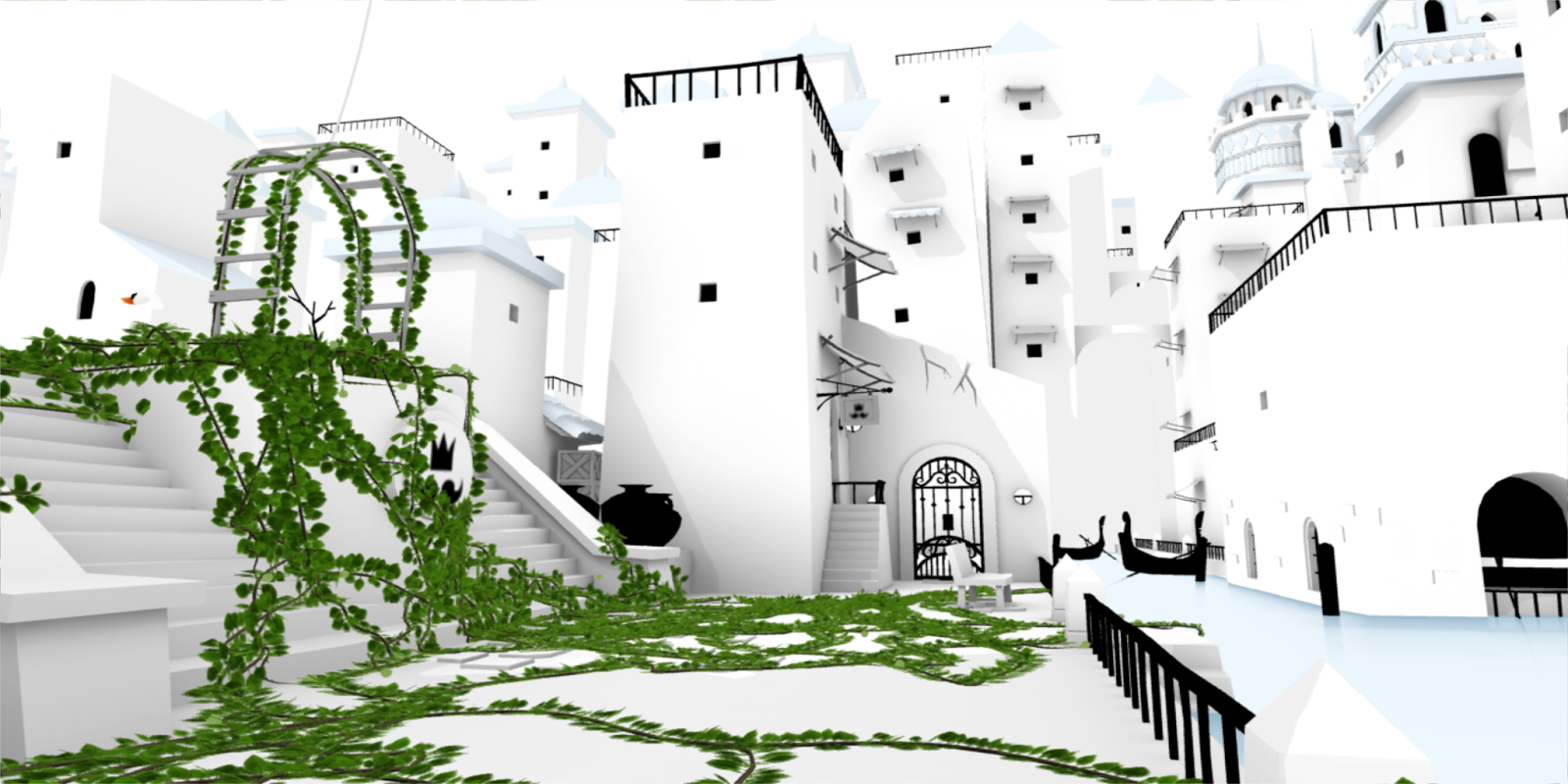 Things start off far better than they finish on this front. When you first fire up The Unfinished Swan, you feel like you are dropped right into this blank storybook. the perspective and use of ink blots is incredibly novel and the storyline keeps you going forward. However, what you are doing early in the game really is not much later than what you are doing at the end of it. You still use a button to jump and you still use a button to hurl ink blots or water drops. There are a few twists along the way, like splats of blue water that dissipate fairly quickly, only giving you a brief glimpse of what you hit. These is also a vine mechanic which is very cool and also very welcome by the time you access it. You can buy toys like a sniper rifle for longer shots, if you collect enough balloons along the way. Still, when it is said and done, you are walking, jumping and throwing so while the game itself is unique, the gameplay options are a bit shallow. 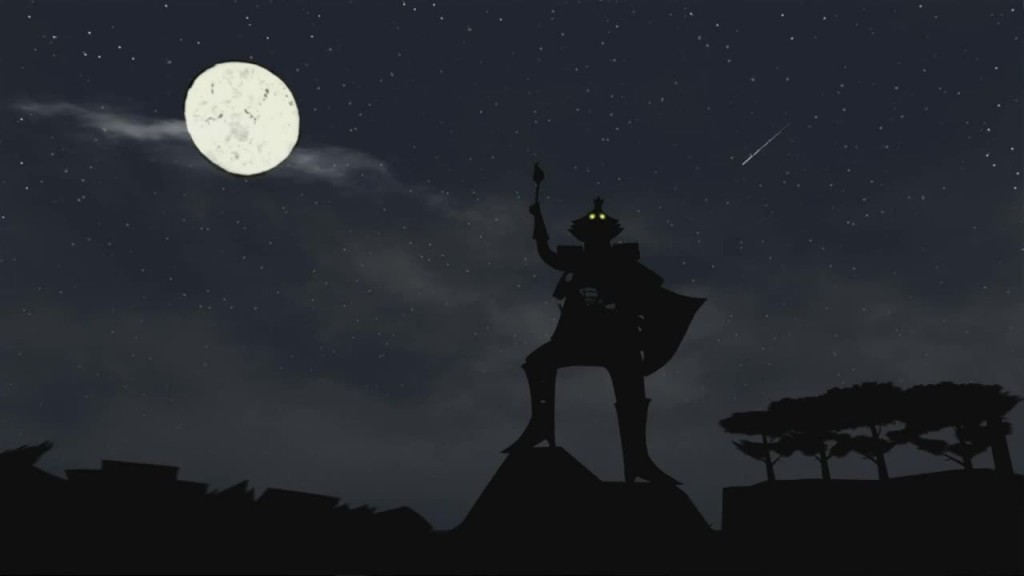 The environments are absolutely delightful to walk around and explore. The feeling that you are taking part in a fairytale book, including the rather interesting ending, really make this game worth experiencing. However, outside of collecting balloons to unlock a few more items, the game does lack replay value, and seeing as it can be beaten in two or three hours, the experience does come across feeling a bit short – especially since I was enjoying it quite a bit. 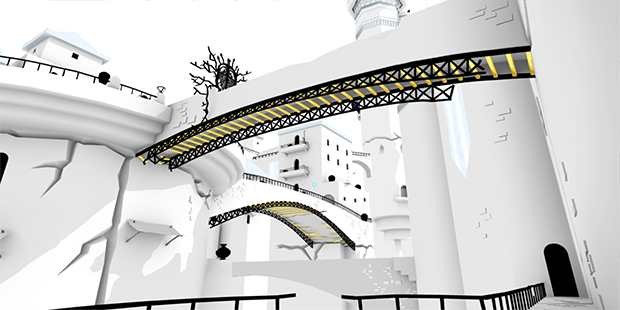 You are not fighting enemies, the platforming is fairly basic and the puzzles are never terribly challenging. Without any guides or help, I managed to beat this in about two and a half hours. It is a short, but entertaining experience. It tells more of a narrative than Limbo tries to, and the game is not nearly as dark as Limbo either, but at times I felt the two games did have some things in common (never more so than when I was traveling through the dark forest). There is a sense of wonder to The Unfinished Swan, and it is definitely worth playing – just go into it knowing that you are not fighting off monsters or experiencing a game that is terribly long. If you are fine with both of those expectations in place, then I think The Unfinished Swan is certainly worth recommending. 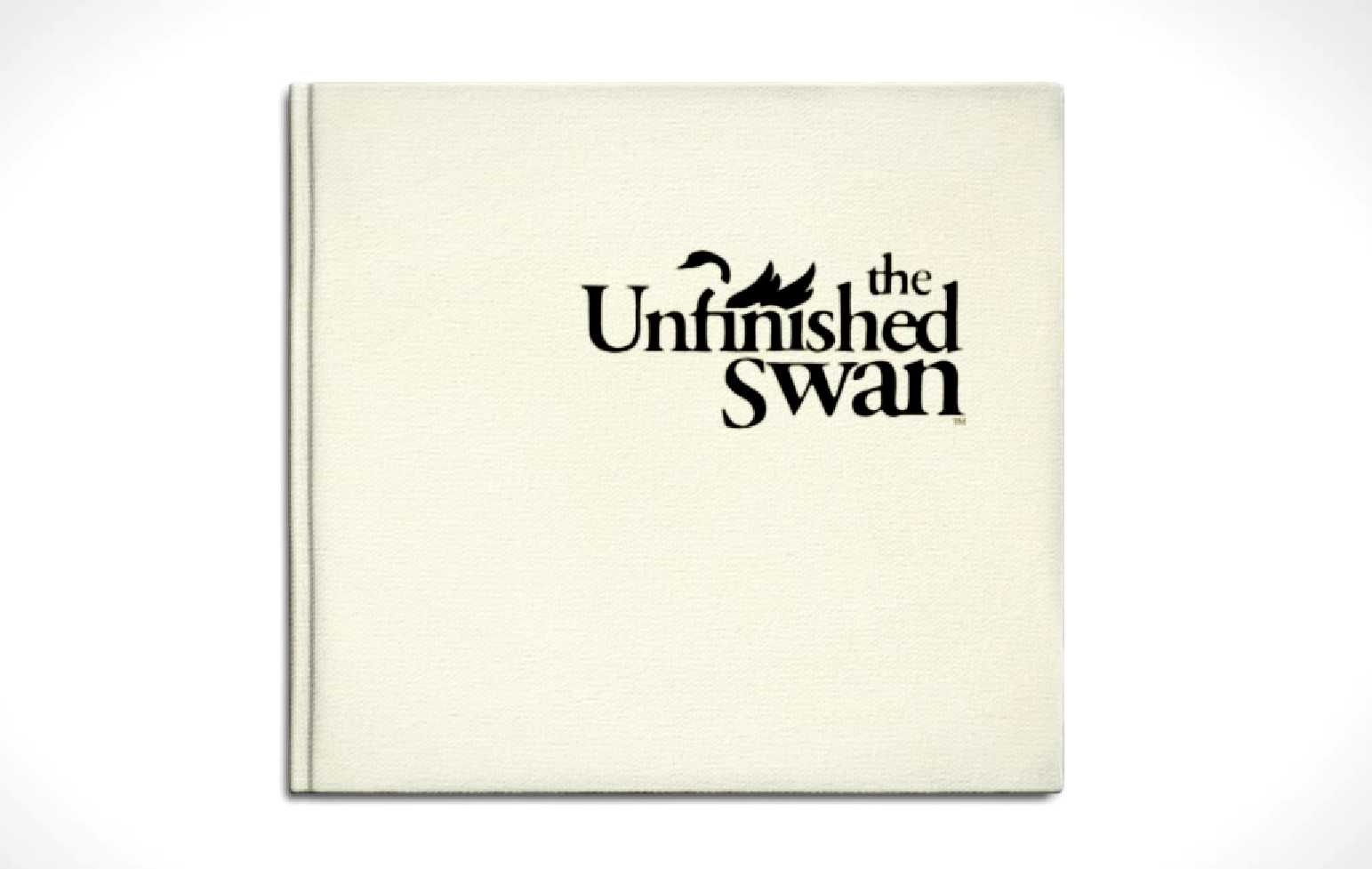