Bowling seems like a title that is easy to ‘get right’ – or at least it should be. After all, the mechanics are pretty straight forward, and as Wii Bowling showed, unique control schemes can make the experience more fun. It seems like the 3DS is playing home to a lot of quick, light titles like this recently, but with varying degrees of success. 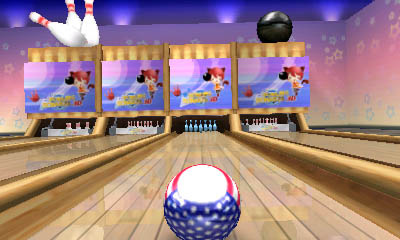 Bowling Bonanza 3D almost feels like it is trying a little too hard, but focusing on the wrong things. You can make adjustments on the lower screen using a stylus – but that just slows things down. There is a 3D effect, but frankly it is almost painfully bad – probably the worst I have seen on the 3DS to date. 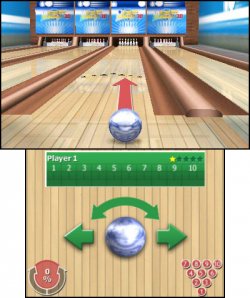 Now the actual core bowling mechanics are decent. You can unlock new lanes and balls via different accomplishments during the game. It all works well enough, but it does very little to draw you in and keep you going – which is sadly a theme among bowling games on the handheld of late. The basic bowling is okay, but… there are hooks lacking to keep you interested. This title will no doubt be compared against Smash Bowling, which was recently released for the 3DS as well, and which I will review in a couple of days.

The thing is, the two games are both pretty similar. A lack of truly different modes means that you get a fairly easy to control game of bowling, with convincing physics, but not a whole lot to do once you start playing the game. I suppose it is okay for a quick five minute fix, but if you are comparing the two bowling options? The bad 3D visuals alone put this one a few steps behind its competitors, and it really does not do anything to distinguish itself in any other way. I will score it a 4 out of 10. 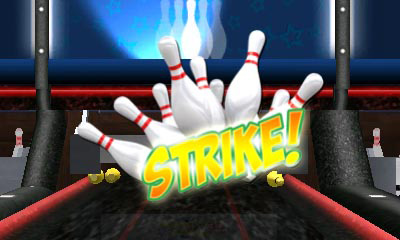