I really had no idea what to expect from Thunder Wolves when I first started to play it. Aerial combat to be sure – you are piloting a helicopter after all. However, beyond that? I had very few expectations. Thankfully, I would say that Thunder Wolves proved to be a pleasant surprise. 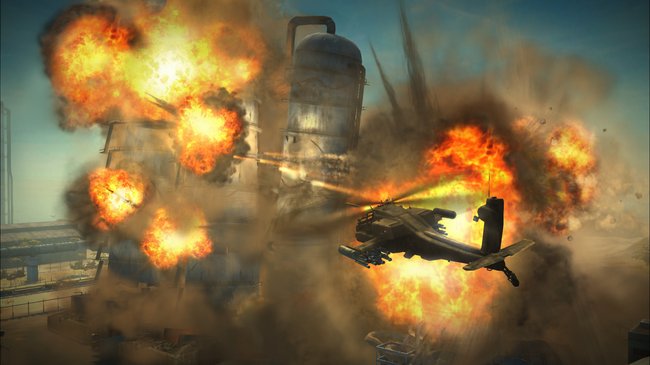 The game gets off to an amusing start, introducing the characters through some dialog and a splash of back story, including one person scolding another over the decimation of a soccer stadium – the the revelation that he felt that ‘soccer is for pussies’. My oldest daughter was in the living room as that bit was acted out, and she and I both got quite a laugh – then and later, as Thunder Wolves plays up that 80’s action movie bravado pretty much from start to finish.

In a lot of ways, it just feels like this game comes from that era of explosions, over-the-top acting and tons of action. It is a fun formula, and while it is far from perfect, you get the feeling that the developers got what they wanted out of it and are making no apologies for it. 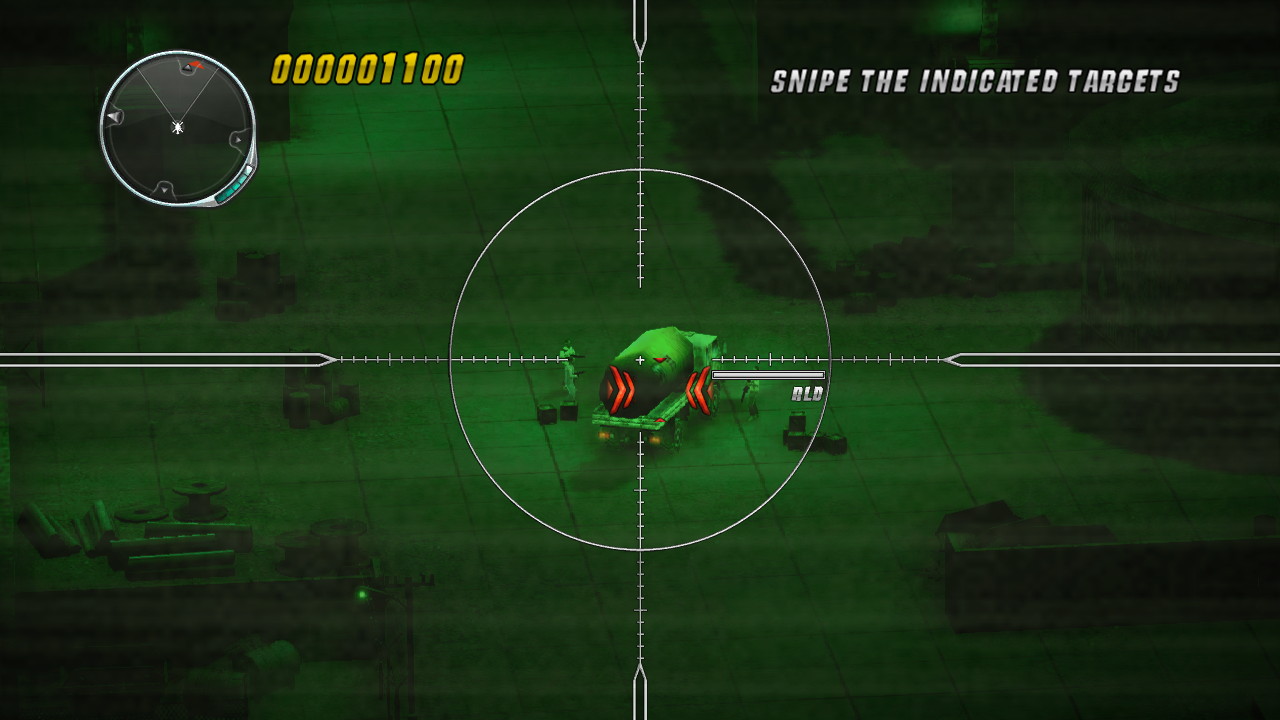 Probably the roughest aspect of the game, right here. The visuals lack great detail and when a ton is going on at once on the screen, the game’s smoothness can suffer. Small foot soldier units have almost no detail to them – you often fail to notice them before the big red circle outlines to highlight them, not because they stand out from the somewhat bland environments.

All of that being said, it is pretty impressive that Thunder Wolves does not bog down a lot more. Most of the environments are destructible, and believe me – things blow up – often in spectacular fashion. Lots of flame, smoke and bullets. Lots and lots of bullets and rockets. Considering your helicopter remains pretty responsive through it all? Kudos on that front. 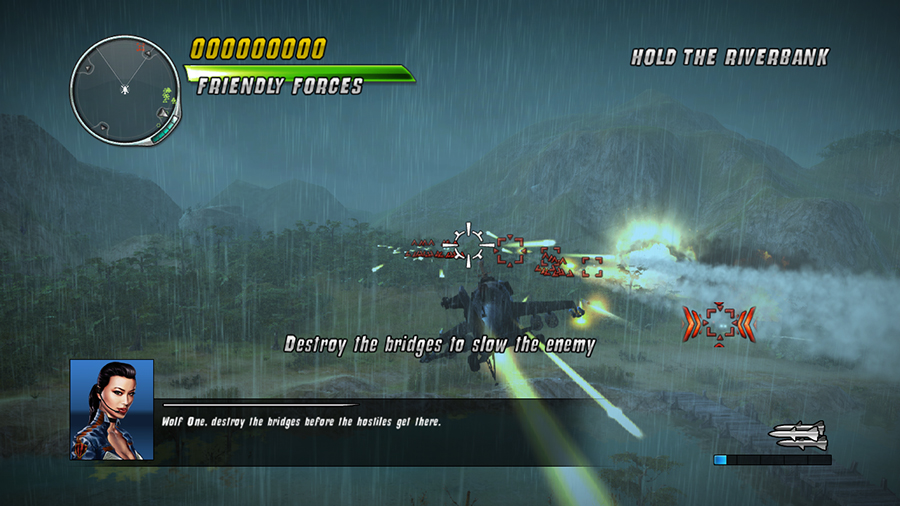 The voice acting is cheesy – but entertaining. You actually care about the fate of these characters by the end of the game. Given how paper-thin the story itself is, that is pretty impressive. The music was not what I would describe as memorable, so much as fitting. There is a strong heavy metal theme running throughout the majority of the game, with a few scores for the more tense storyline moments. Both serve their purpose pretty well here. 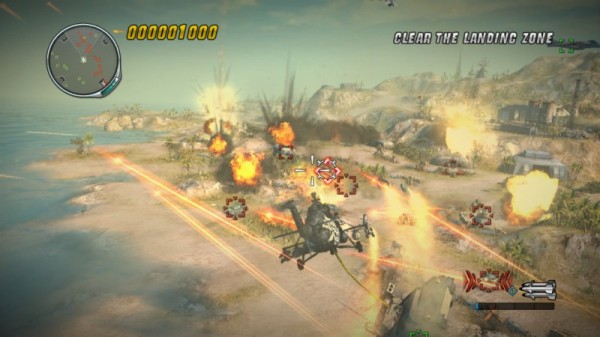 The helicopters are very responsive – sometimes too much so. You can find yourself better able to avoid gunfire because of this, but it can make missions where you are supposed to pick up or drop off someone/something very specific a bit more challenging – especially since you are usually getting a lot of gunfire at the same time. The ability to roll through different rockets – with unlimited ammunition for both missiles and machine gun – was an interesting choice that really just sells the carnage. The game could have been more strategic if you had to manage your ammo, but I think this was the better design choice.

While the majority of the game is spent flying and shooting from your helicopter, there are some on-rails scenes where you simply man the weapons and blast away. There are a few other instances involving smaller, less able choppers and getaway vehicles as well. There are also a handful of sniper missions. These give you a chance to breathe, but they are not as much fun as the primary flying and shooting mechanics that make up the other 90% of the game. 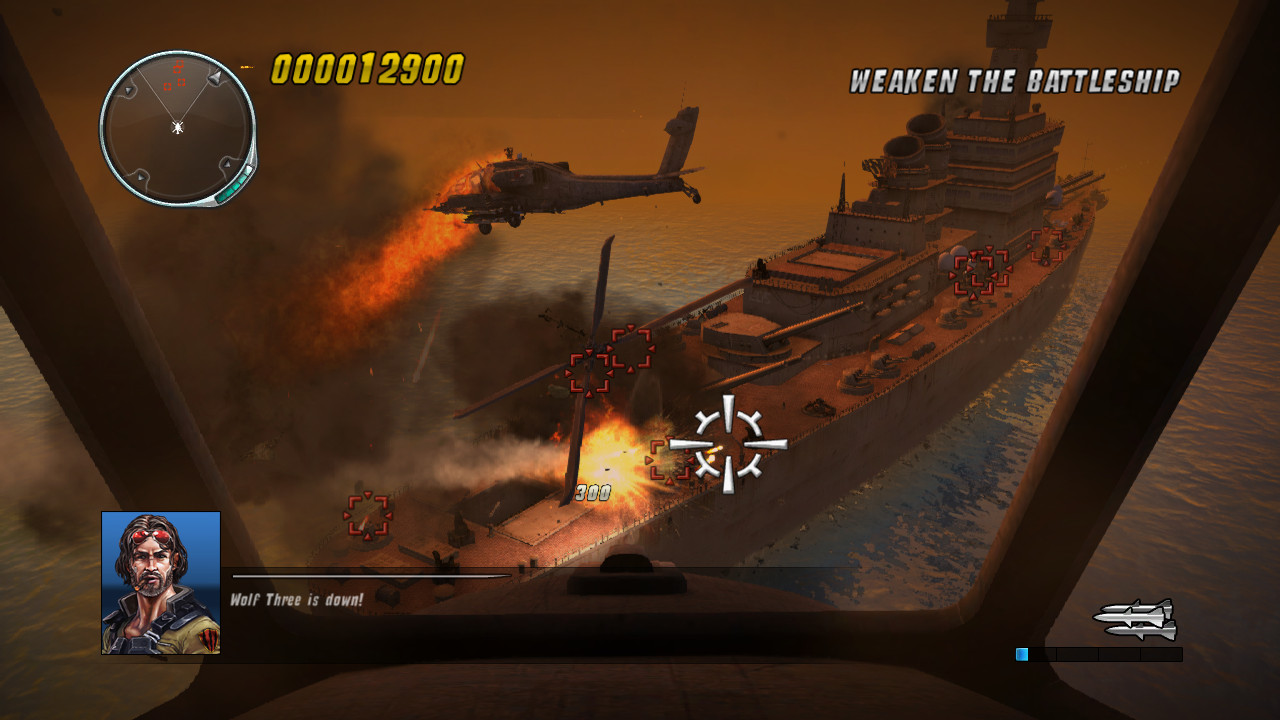 The game is short – probably too short. I beat it in just under four hours. There are higher levels of difficulty you can play with, but they really do not make the game more fun. They do not seem to affect what little AI there is (basically if the bad guys see you, they start shooting from all directions) – you just die quicker and they take longer to kill. There is an online leader board as well as a co-op method of play that help the game’s mileage too, but in the end it is all pretty short without a lot of reason to pick it back up again. The combat is fairly fun, just repetitive. 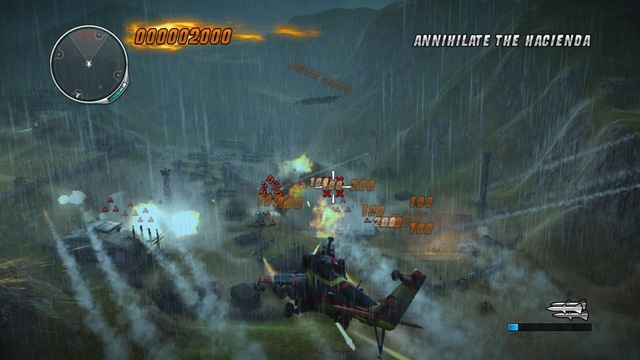 That is really the best way to describe Thunder Wolves, which could very easily be a guilty pleasure for fans of the high-flying 80’s action movies, but without a lot of hooks to draw you back in, there is not a lot of life left in this title after you have beaten it. It could however, provide the foundation for more good titles down the road. After all, every good action movie needs a sequel. 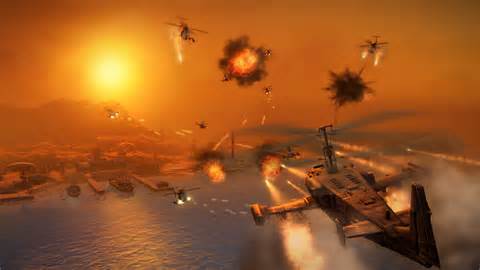