There are a lot of collectible or trading card games out there these days (CCG or TCG depending on your favorite term), and while they seem to be flooding the mobile market, a few notable ones have made their way to bigger screens as well. In the last year we have seen the latest Magic: The Gathering hit just about every format imaginable, and I still think Might & Magic: Duel of Champions is an outstanding offering as well. 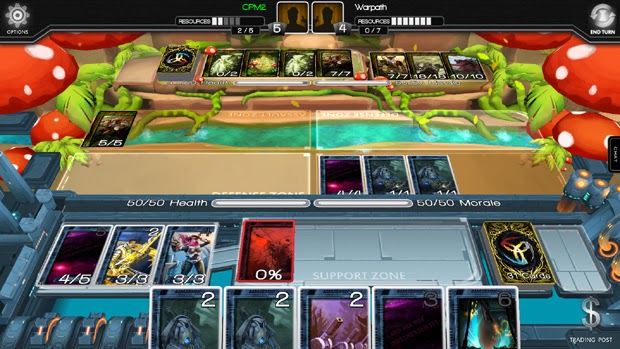 I have been fortunate enough to try out a new game called Infinity Wars, which is currently in beta. Overall my impression has been quite favorable, as there are a handful of pretty cool new features and mechanics not really shown off in CCG’s to date. The premise is a bit all over the map, which I am not sure I am as big of a fan of. I liked the very heavy themes found in games like Magic: The Gathering, that focus on fantasy swords and sorcery (much like Might & Magic), where as some older physical games I used to play like Legend of the Five rings and Marvel: Overpower had their very distinctive, focused themes as well. 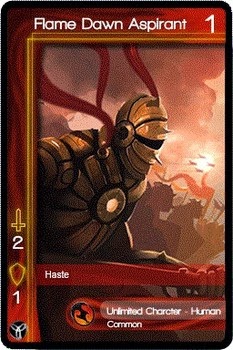 Some clans have a sort of martial arts theme, others swords and sorcery, others a more mechanical/steam punk kind of vibe. I good storyline and some nicely themed campaigns can likely pull all of this together a bit more convincingly, but it does just seem odd to have an unarmed martial artist taking on a group of armored machine-gun toting soldiers and win.

Another interesting element is completely cosmetic, but entertaining in that the cards are animated. It is not a ton of animation, but this feels like a largely missed opportunity over the years. Recently Magic: The Gathering has had a handful of slightly animated cards show up in their Duels of the Planeswalkers series, but it just seems like the digital medium would be the perfect place to bring some of the artwork to life. The art here is not quite as gorgeous as some of my favorite Magic cards, but it looks pretty good and the movements are eye-pleasing and unobtrusive.

Now for the gameplay mechanics. You see some of the more familiar aspects found in other games show up here, like attack and life/defense of the cards. Games like Magic do not use alignments or spacial regions, while others like Might & Magic or Spectromancer are built around competing rows/columns of cards battling directly with one another. Here Infinity Wars has a few regions that characters are more or less lumped into. You have a commander region where you can set up three specific creature cards to have available at the start of the game (allowing you to really flavor decks a specific way if you like), the support zone (where your creatures veg for a turn when cast), the defensive zone (which protects your fortress) and an offensive zone (which is where you try to place cards so you can attack your opponent’s fortress).

As you might expect, opposing zones face one another, making you decide if you want to prioritize offense or defense. The fortresses start with 100 hps, and if there are not enough defenders to block, you characters do damage to the fortress. Drop it to 0, and you win. There is a second number to watch, which is one of this game’s interesting twists, called morale. When your creatures die, they have a value called morale that gets deducted. Morale also starts at 100, and when it reaches 0, you lose as well. There is also a clan that focuses on taking morale from their opponent through means other than creature death. However, these two values are not created equal, because almost every other type of deck focuses on life, which is generally easier to diminish. 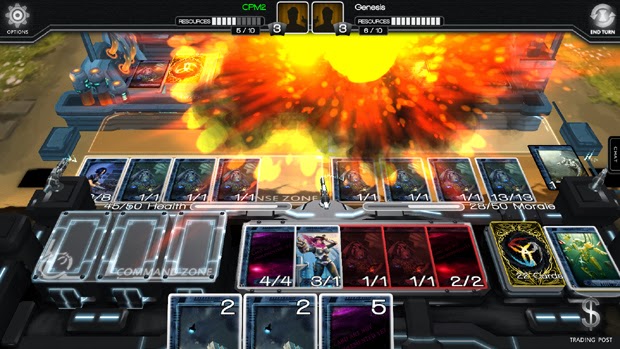 The other thing that I found really interesting about Infinity Wars is how the turns play out. In most CCGs you take a turn, then your opponent takes a turn. You then play your turn again. Lather, rinse, repeat. However here, there is a simultaneous system at work here, where both sides make their moves without the other one seeing what is going on. Then, the turn plays out as all of the actions unfold (similar to how Frozen Synapse took strategy games in that direction, and away from turn-based). It is a fun twist on the norm, and probably would not be doable in a physical version of the game, but like the animated cards it works really well in digital format.

There are still some things that need to get cleaned up here, like how high this thing runs in memory (usually about 1.5 gigs for me in a matter of minutes), and a few bugs (which they have been working to clean up). Also the decks/themes should be commended for their variation between types, in that color type it feels like there is not a lot of flexibility yet. For example the deck theme around taking a person’s morale does not feel like a very effective attacking deck. Yet in Magic you can choose the color red and try to build up large flying dragons who pump, or create ground forces that have haste or use spells to inflict direct damage. In Infinity Wars is feels like you would have to mix up the deck types to get that same sort of variety. Of course, the game is very young and still in beta, so we have time for them to continue to develop – and I for one am looking forward to seeing where this goes.