comments Share
You are reading
LocoCycle – Xbox One Review

This game is the very definition of the phrase: dumb fun. 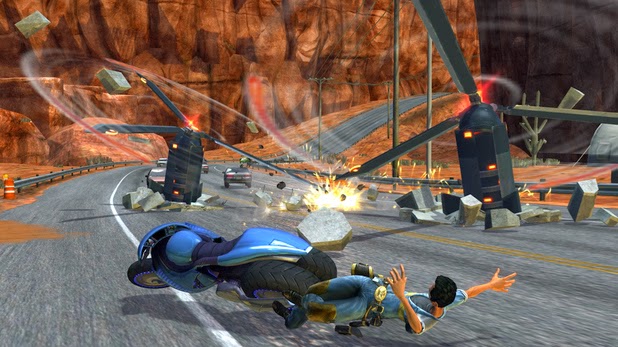 That is a pretty simple lead-in, I know, but it really does a good job of summarizing what LocoCycle is all about. The characters are all just silly, unaware props for a game that has very little depth but still puts together a decent, if brief show.

The premise is that you are controlling a lightning struck sentient combat motorcycle called I.R.I.S., who after seeing an advertisement on television wants to embark on a long road trip to freedom. Somehow her mechanic, Pablo, gets his pant leg hooked to her frame and is dragged along for the ride. Pablo has some pretty amazing pants, because the road never manages to tear a hole through them, and he himself is apparently made of sturdier stuff than Wolverine as he gets hurled at enemies by I.R.I.S. as one of her basic attacks. 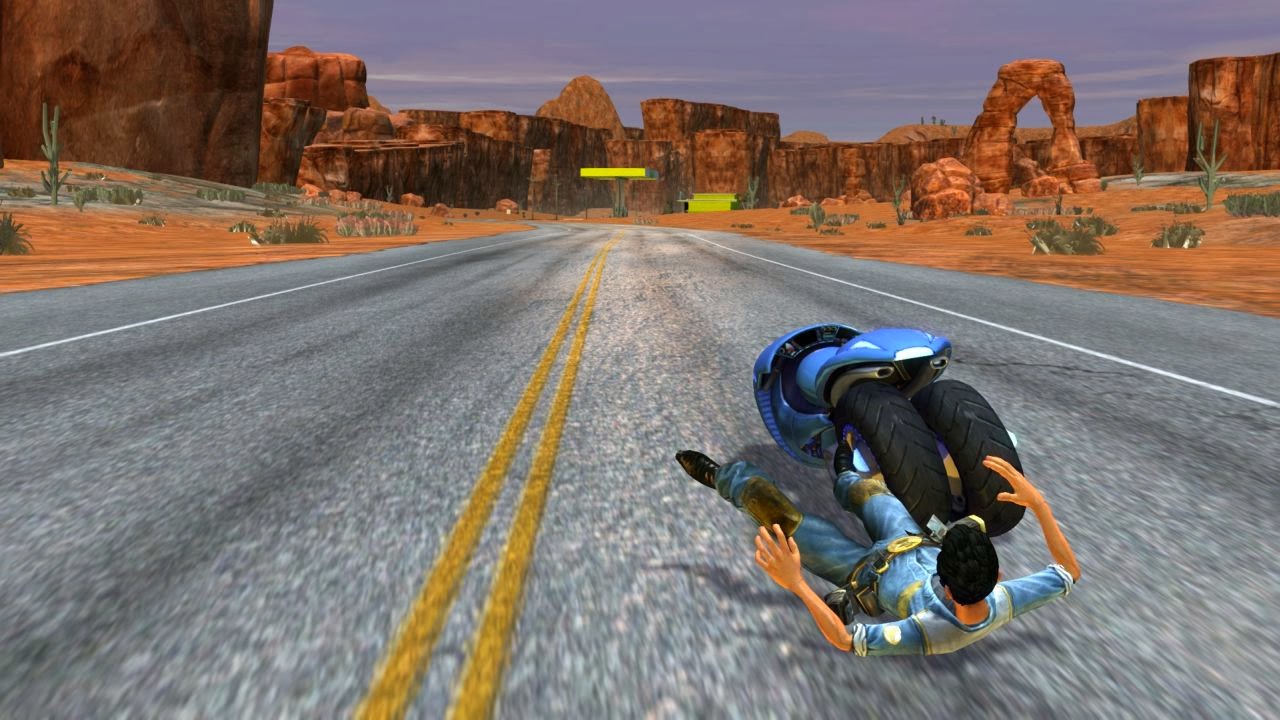 The game looks pleasant enough, especially for a download title. Lots of grays from the various roads you are traveling down, but some of the background scenery has enough color to pop here and there. Considering the sense of speed LocoCycle tries to portray, the fact that the game never sputters or shows signs of slowdown is a perk. The cutscenes are handled by actors in full motion video, which actually seems like a good choice here, but their in-game representations look good as well. 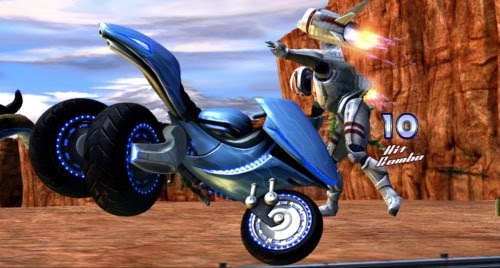 This is something of a mixed bag. I found I.R.I.S. to often be quite funny as she prattled on about things while displaying an amazing lack of awareness for the danger she and Pablo were in. The cutscenes are cheesy, but it is clear Twisted Pixel is not attempting to take itself too seriously here. Some of the humor is hit, other parts are miss so your mileage may vary, but considering you are dragging the mechanic across miles of road, I am glad the developers did not try to take themselves too seriously. The sound effects and music are there, but are nothing to really write home about. Not bad, just nothing standout either, though at least the tempo of the music does a decent job of conveying fast paced action. 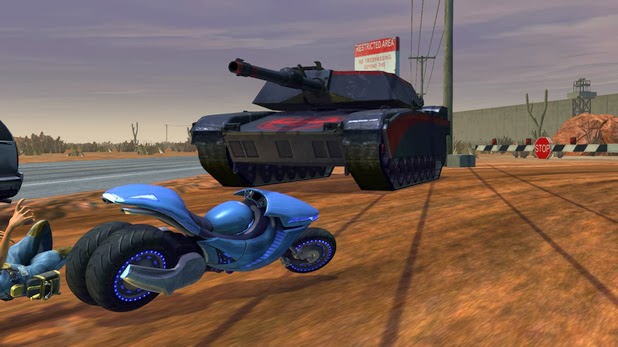 The gameplay here is the very definition of average, honestly. The game is a hybrid racing action title, but you seldom are really doing both at the same time. You can turbo and weave about through traffic and tunnels, and you can engage in combat with high tech enemies bent on getting I.R.I.S. back home. You have a couple of melee attacks, one quick with low damage and one higher damage but slower. You can also fire a gun. During the melee parts, the game becomes largely on rails as you navigate the terrain and focus on the baddies. This really is not a hard game at all, largely because you only ever really have to focus on one thing at a time. 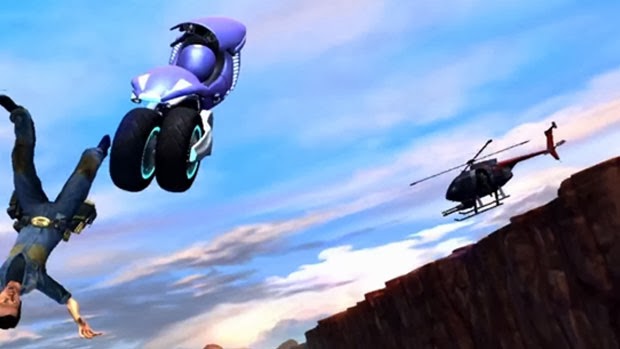 This is a short game, that only takes a handful of hours to complete. It also offers almost nothing in terms of replay value. At regular intervals your prowess in combat is graded, so if you want to try and improve over your last score, there is that. I like that Twisted Pixel did not try to take this premise too seriously at all, and it elicited several chuckles from me along the way – but if the humor falls flat for you, there might be even less incentive to see LocoCycle through to completion. The upgrade system does give you some sense of progression, though few of the upgrades really felt like they were doing anything for me along the way. 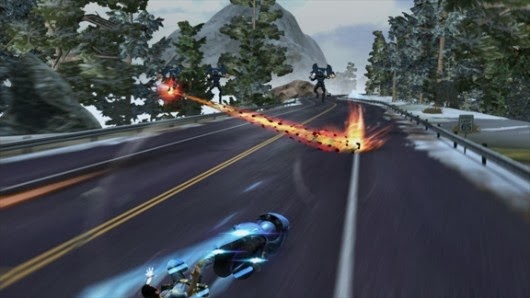 Not a horrible game, but hard to call LocoCycle a great game too. My oldest daughter is not a gamer, but she did have a good deal of fun with it – perhaps because the somewhat simplified controls made it more accessible to her. Still, this is a launch title for the new generation of video game consoles, and it feels decidedly last generation as it does really nothing to stand out from the crowd. 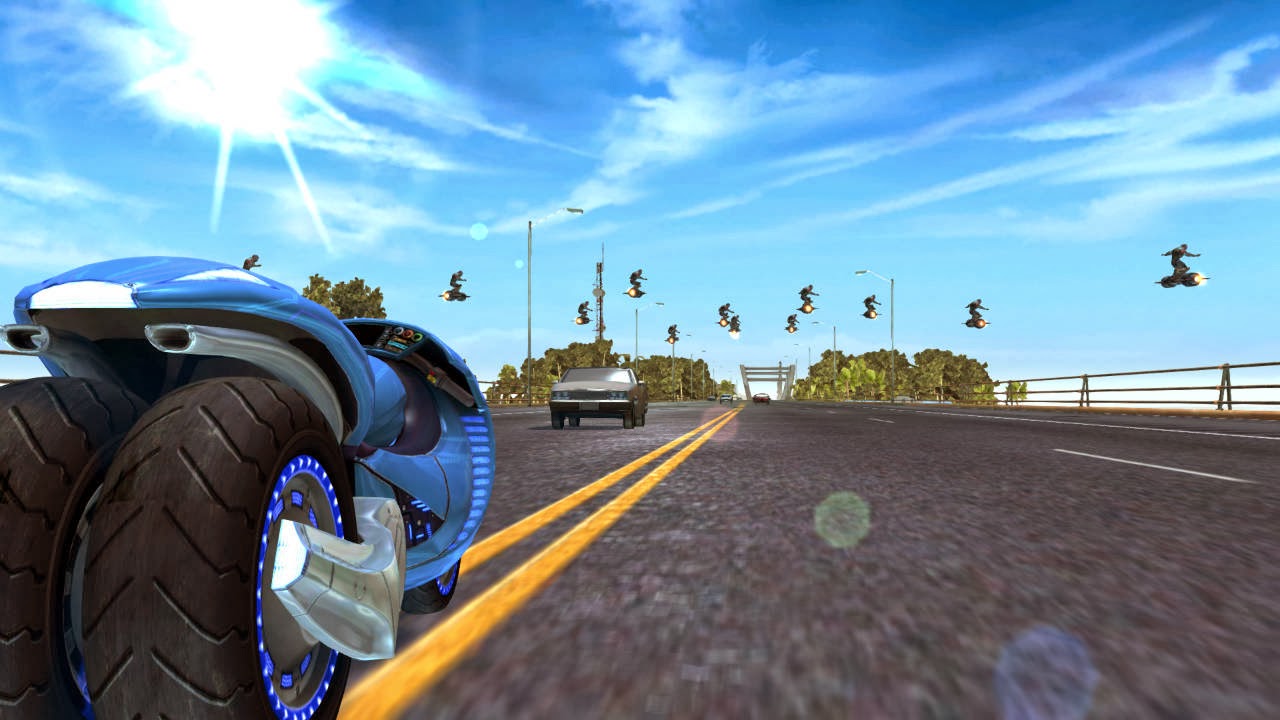