Darkout is an interesting game I had not hear much about prior to its release. Watching video and images of the title, it was easy to draw some comparisons to well-known titles such as Terrarira and Minecraft. Darkout has mechanics that seem similar to these titles, but the aesthetic is completely different, and I actually found that to be my favorite part of the game.

The premise revolves around your character having crash landed on a world long forgotten called Illuna. At first there is a really dark, lonely vibe to your character’s surroundings as you focus on building shelters and research new technologies in hope you can survive. However, before long the tension ratchets up as you find yourself in need of weapons to help defend yourself on a world you are most certainly not alone on.

The visual style really appealed to me, with lots of dark tones and a shadowy, ever-threatening world. The sound effects and music are alright, but they do not hold up their end of the bargain nearly as well. They get the job done, but never struck me as terribly memorable. It is unfortunate, because better music could have made the game a bit more suspenseful. 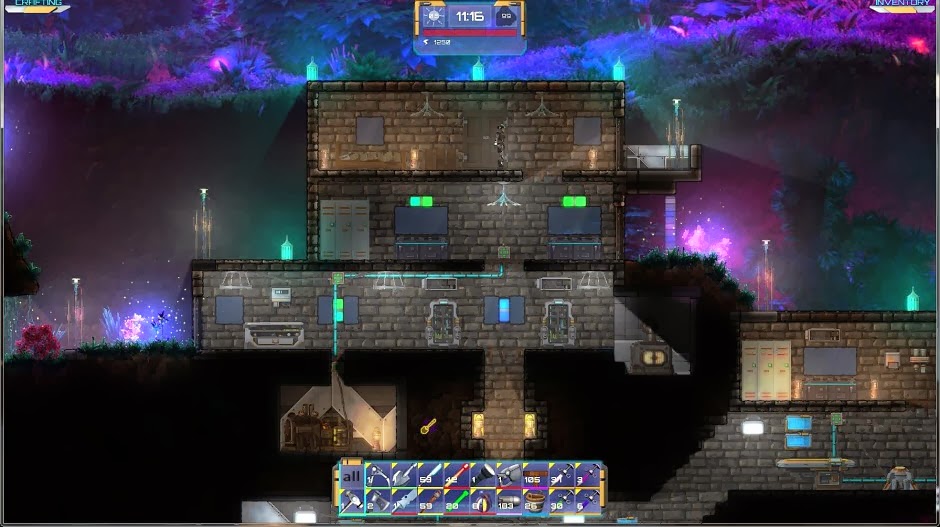 The real question however, is how does Darkout hold up when performing the game’s primary functions: building, crafting and researching. Here is where things get a bit rougher. The menu system that drives it never felt terribly intuitive to me, though with enough time I was able to find my way around it easily enough – there was just a bit of a learning curve involved that felt a bit steeper than it necessarily needed to.

The weapon crafting and research felt very simple, and never greatly appealed to me. Thankfully the mechanics behind the construction worked pretty well, but the exploration and story feel very thin and do very little to motivate continued progress. Darkout feels like it has some good ideas at work here, but that it could have used a bit more time getting polished up. A more engaging story and a cleaner interface would have done wonders for making it more appealing to gamers, who might enjoy the building while it lasts.

That being said, I am not sure there is enough standout content beyond that to entice most gamers into investing heavily into Darkout. Not a bad game by any means, but it takes a lot of time to get into and the payoff is only average in the end. Darkout makes for an interesting distraction, but it did not hold my interest as long as I hoped.