The Hyperdimension games have always tried to straddle a line between serious themes glossed over with plenty of tongue-in-cheek humor. The premise is a JRPG set in the world of Gamindustri – with main characters called CPUs that represent each of the video game consoles. This current title takes place several years after the last one, and during that time of peace and prosperity the heroines have become quite comfortable and relaxed to a fault. 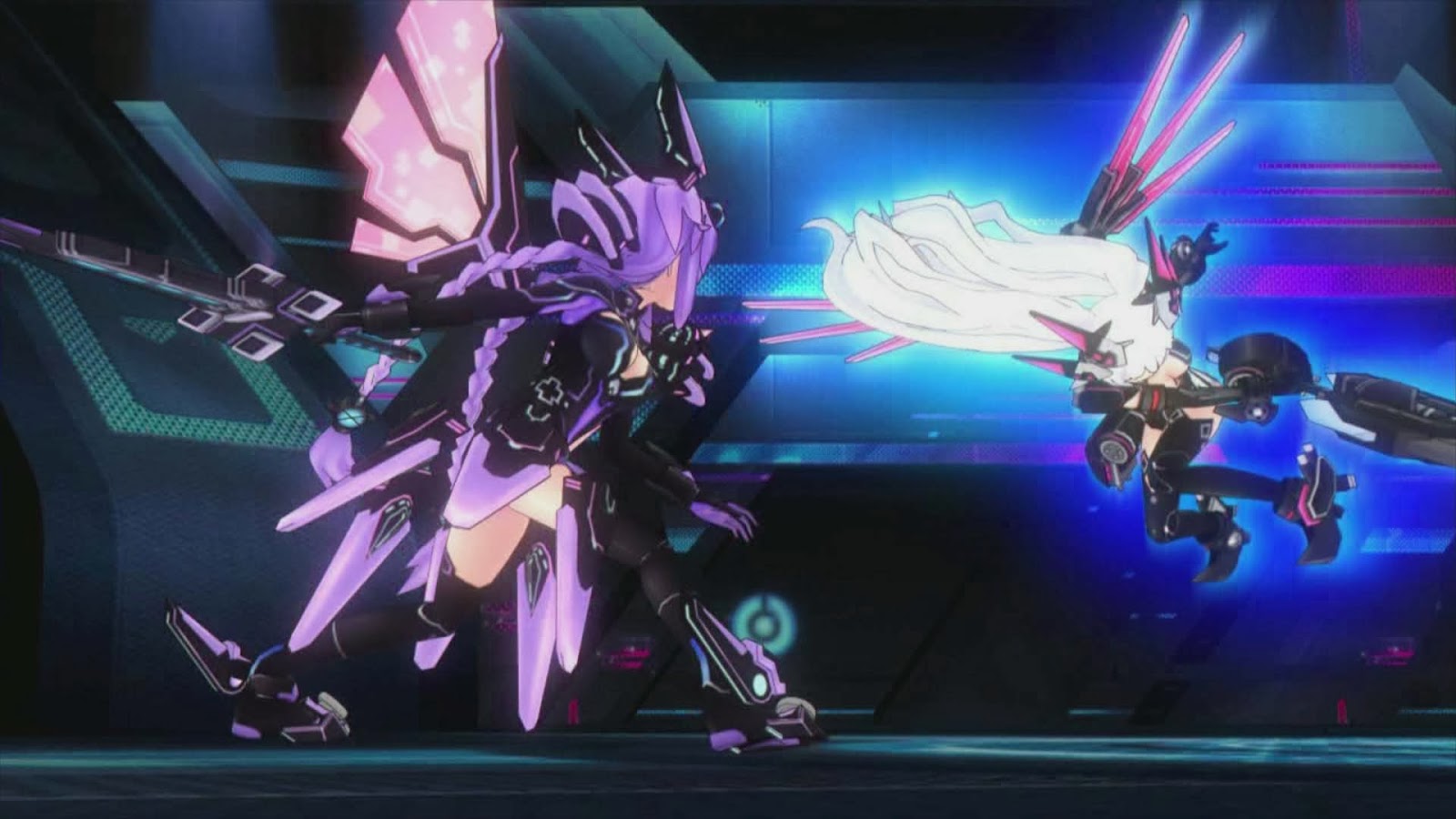 Fast forward to where the main protagonist is sent to an alternate dimension that looks very much like hers – but set back in time with new villains to try and thwart. The characters, along with this premise, are very over-the-top. I found most of the humor hit the mark with me, but if you are someone who has to take your RPG’s seriously, you may find the nature of this story a bit too much for you. 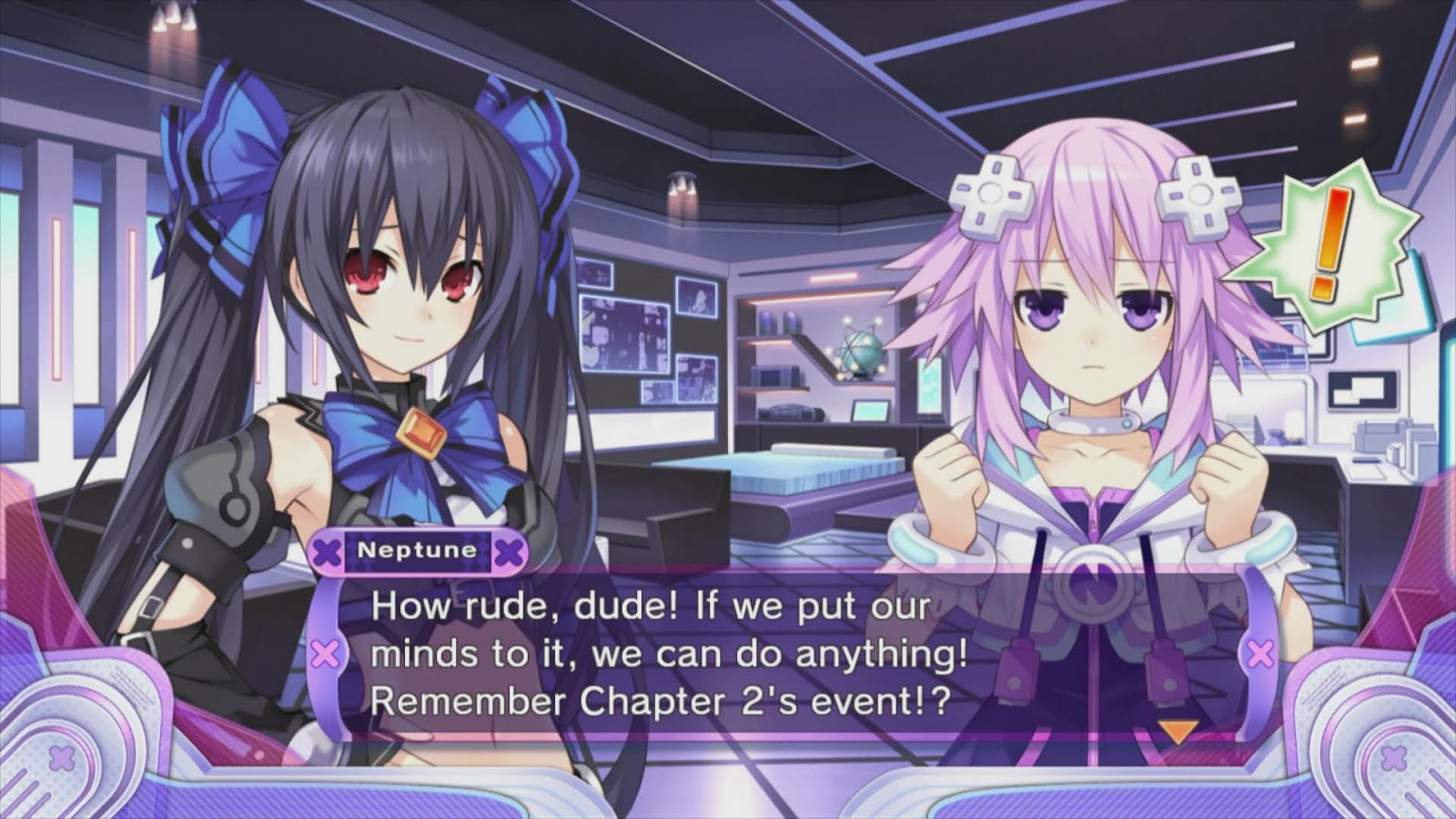 I really like the art style. It is vivid in color and detail with main characters that are well-designed for the most part. Creatures are a bit less exciting most of the time, though there are a handful of standouts. My biggest complaint is is the framerate when you are walking around dungeon environments. Things feel a bit herky-jerky, especially when there are enemies on the screen moving around too. It feels as though there is just too much movement for the system to properly handle. 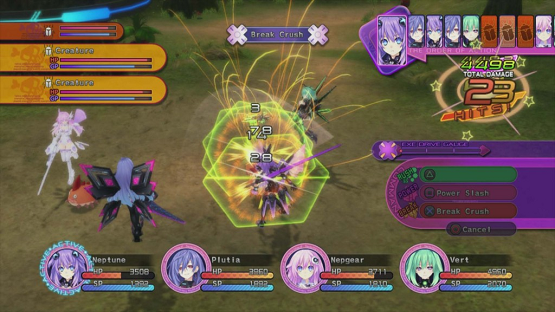 There is a lot of voice acting, and while most of it is decent, I am just more impressed at the localization effort than perhaps the performers themselves. There is a ton of text and a ton of dialogue, and I appreciate having it in English. The music is pretty upbeat and seems to mesh nicely with the colorful visuals. Sound effects can get a bit repetitive, especially catch phrases in combat. I was kind of getting sick of one character repeatedly saying every round that: it should always be my turn. It was cute the first time. Not the sixtieth. 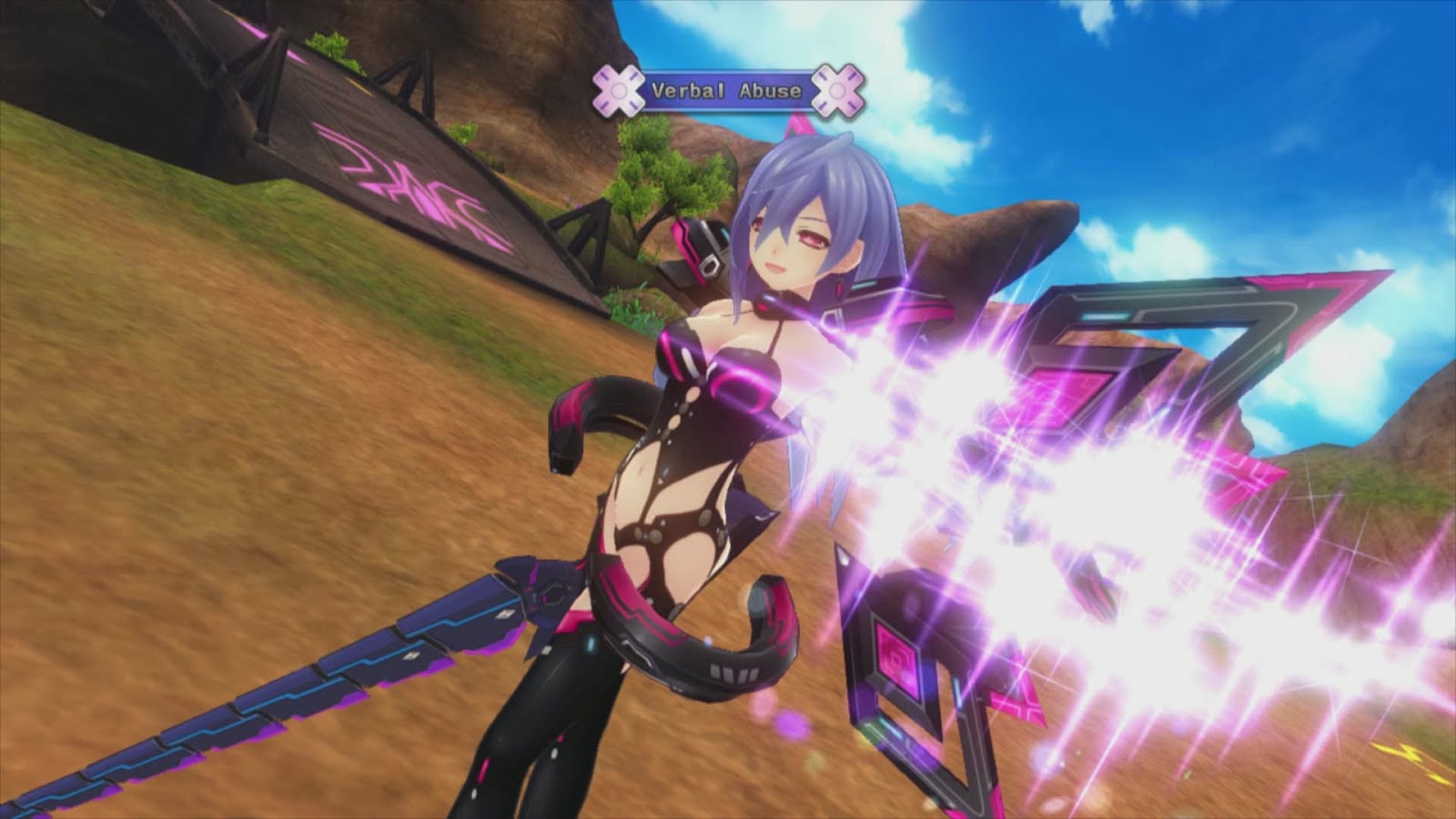 I actually enjoyed the combat quite a lot. It is still a turn-based affair, but there is some movement on the battlefield that does an excellent job of creating a sense of space during combat. You walk your characters around, and target enemies you can reach. If anything is ‘missing’, I would have liked the option to ‘slow’ my movements. If you can highlight two enemies at once, you can strike them both, but the characters move so quickly that it can be difficult to time those multiple target highlights. The menus are easy to navigate and the combat itself consists of different kinds of strikes and super attacks. Nothing really revolutionary in here, but it all works nicely and keeps the game moving forward. 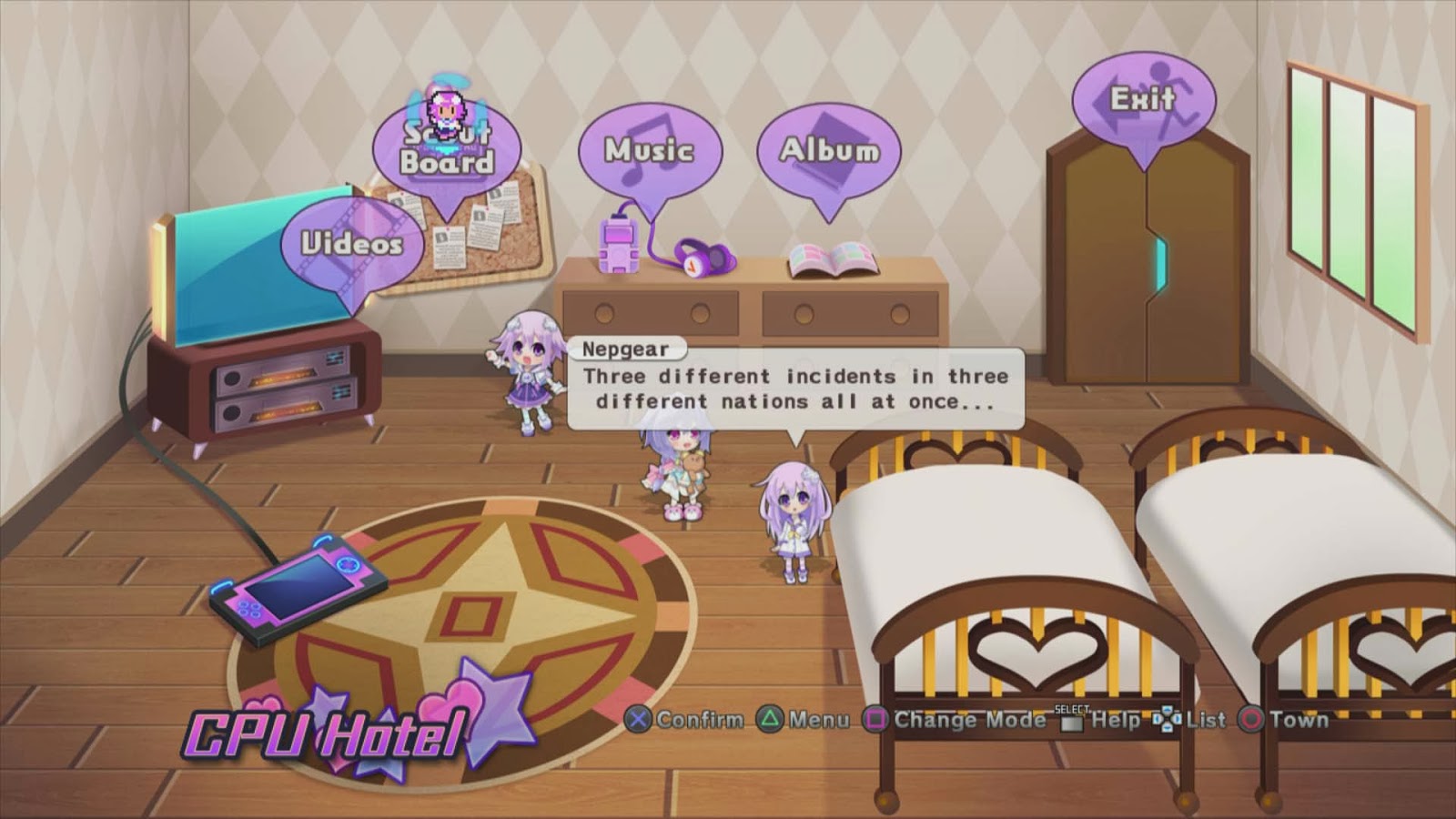 The storyline was okay. I enjoyed the quirky characters, but really did not get overly invested in the events taking place around them. There are some neat systems in play, such as the support system and the way meeting certain goals in combat (such as striking a certain number of victory poses) give you nice character upgrades. The quest system is often optional, but at points is needed to advance the story as well, and it never gets particularly interesting. Just about everything is fetch/return or kill-this-many-of-a-critter variety. 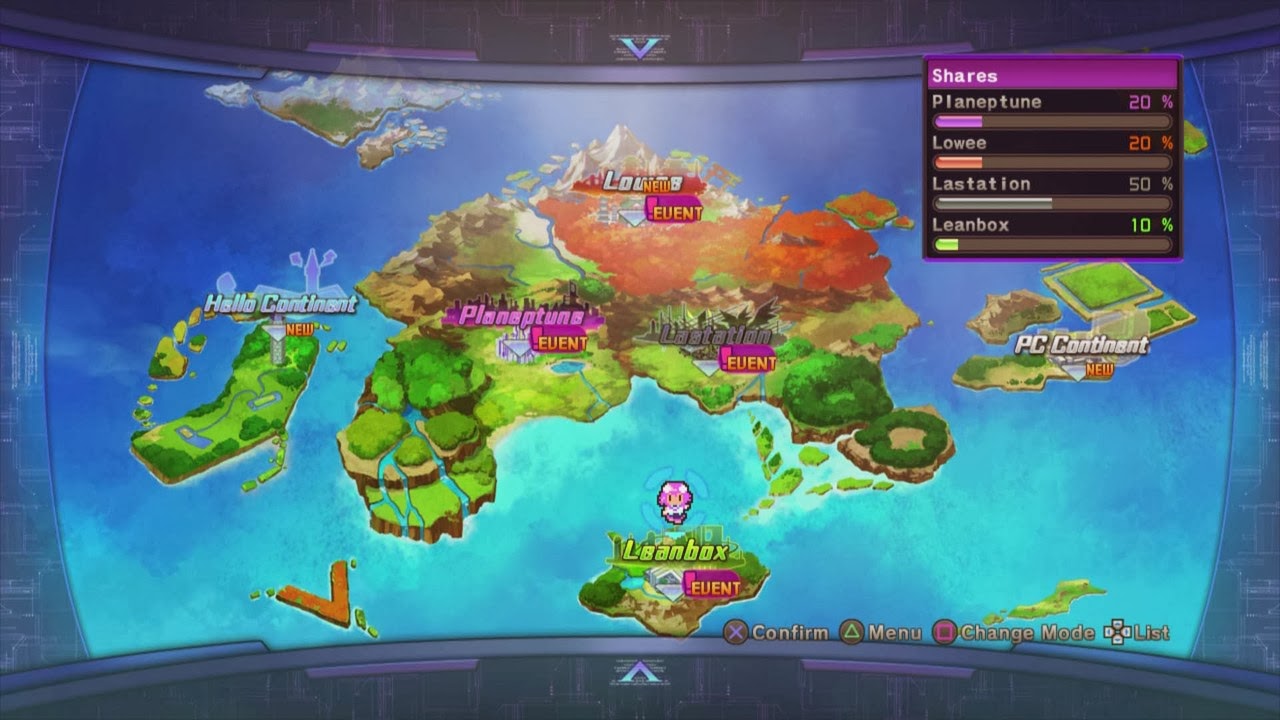 I feel like this notion was touched on in both the Gameplay and Intangibles area, but Hyperdimension Neptunia Victory really does nothing to reinvent the wheel, but it does a nice job of ensuring that it is a smooth ride along the way. Combat is quick and fun, if a bit imprecise at times. The story is definitely of the niche variety and will not appeal to everyone, but I had a really good time with it. It is hard to take a game too seriously that is basically themed around console wars, but the team deserves credit for making the characters. They are actually funny and generally pretty interesting as well. A fun, solid if unspectacular JRPG. 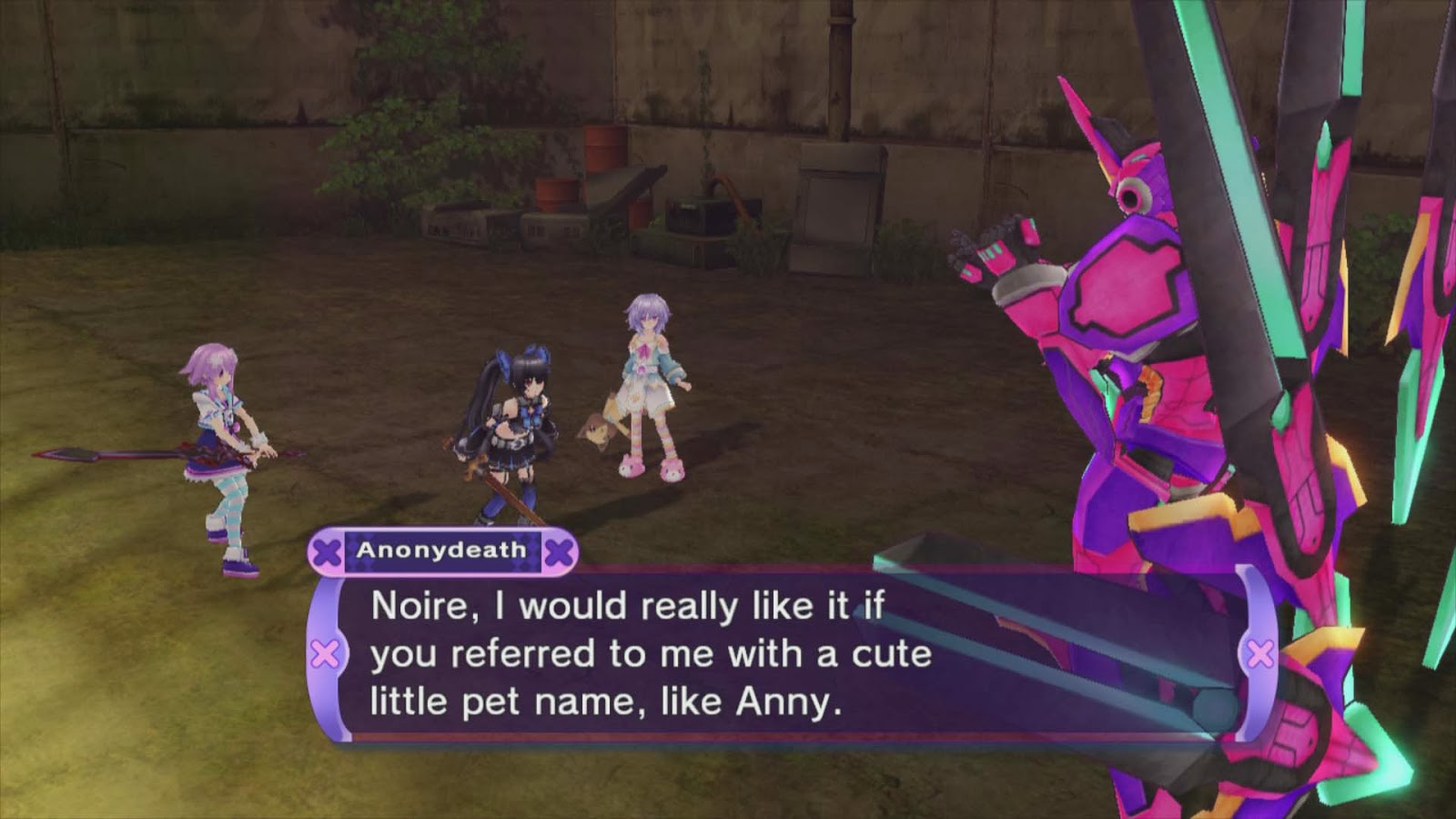 Facebook Twitter Pinterest E-mail
Previous article Instead of a review today, you get to see me in the hospital
Next article Beyond: Two Souls - PS3 Review