Providing players with a sense of on-foot mobility has been an evolutionary process since B.J Blazkowicz took his first steps in Wolfenstein. Shortly thereafter, a player could circle-strafe, jump or rocket jump in games such as Quake, Doom and Unreal Tournament. Players would even take it upon themselves to abuse the physics engine just to squeeze even more momentum out of a game, leading to the concept of Bunnyhopping – essentially defying friction by crouch-jumping to gain more speed than the game intended. In the modern shooter, we now have mantling over obstacles from cover, double jumps, dolphin dives, roadie runs and wall climbs. Things really hit their stride (terrible pun intended) with Mirrors Edge, an over-the-top first-person game focused solely on parkour along high-rise buildings. Just recently, Titanfall provides the most accessible and gratifying free-running system, allowing for easy map traversal both vertically and horizontally. 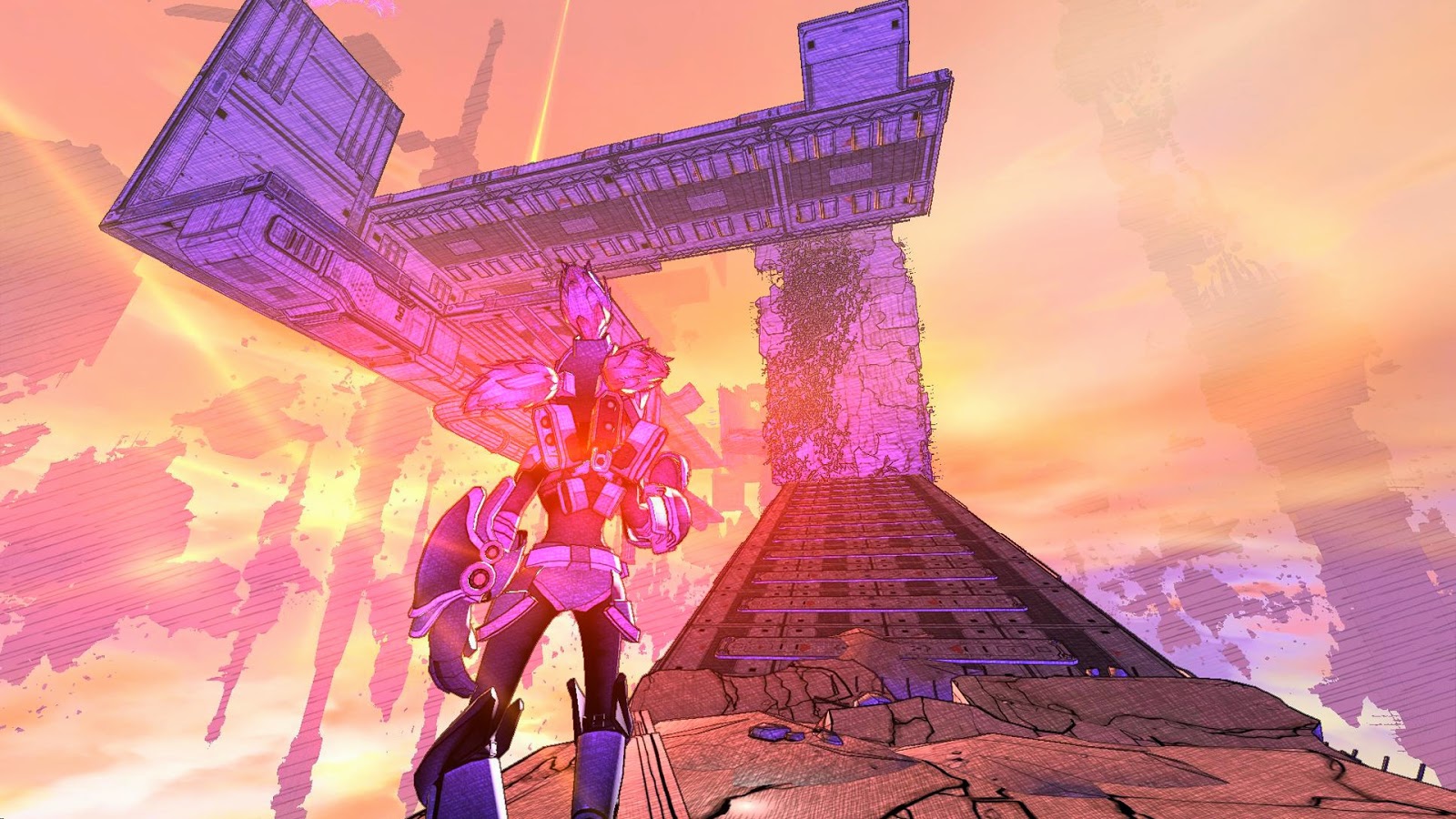 Cloudbuilt, the freshman offering from developer Coilworks, tries to focus on the idea of precision character control and exploration as the core gameplay conceit. The game is a series of levels, each one a specifically laid out structure of free-floating platforms, walls, and enemies. At your disposal is a booster pack to allow for double-jumps and thrusting along walls, and a gun to deal with enemies that stand in your way. Don’t let the gun trick you into thinking this is a shooter though, as the game is designed as more of a point-to-point race, forcing the player to think quickly to reach the next checkpoint. There is a clear idea of what the designers want this game to be, but it falls rather short of that goal. 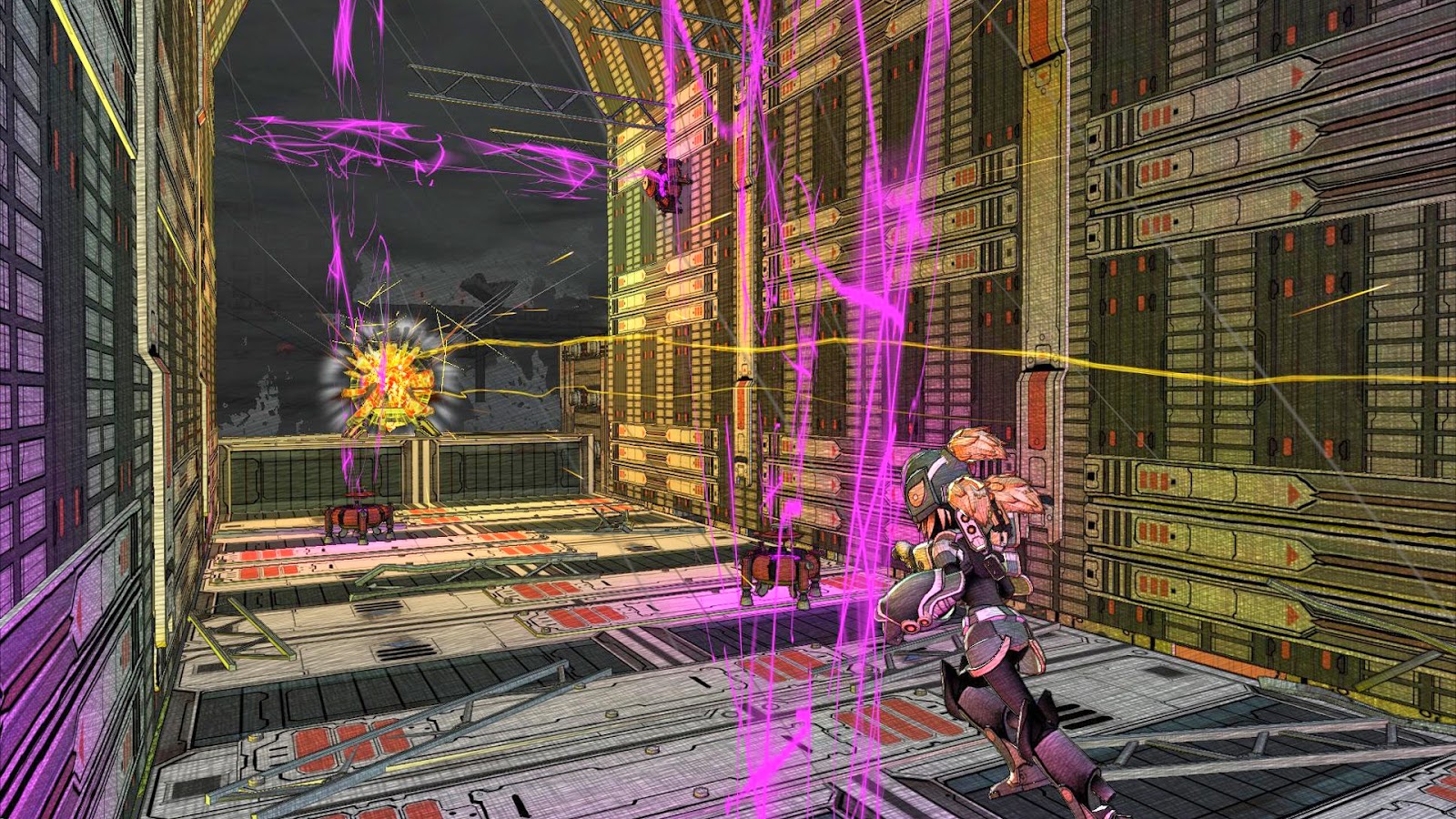 The visual style of this game is certainly unique, a cel-shaded anime veneer on derelict free-floating platforms. The title screen alone shows an appealing dichotomy of lush grass and vines reclaiming the disused hulks of concrete and metal structures. A foggy horizon shows that this wrecked structure is not alone. And while this looks great on the initial screen, it soon becomes an actual burden to gameplay. The three dimensional greenery becomes aliased visual clutter, complicating perception of the path ahead. Enemies, whether they be turrets, player-seeking flying orbs, or quadrupedal robots, can blend into scenery even when near to the player. Worst of all, there is a sort of “cross hatch” video filter applied to everything, even textures that already have their own cross hatch texture. This leads to an even more complex, and even nauseating, visual landscape. Seeing the filter remain static on the players hair or a nearby platform, despite your high speed maneuvering, is very jarring. 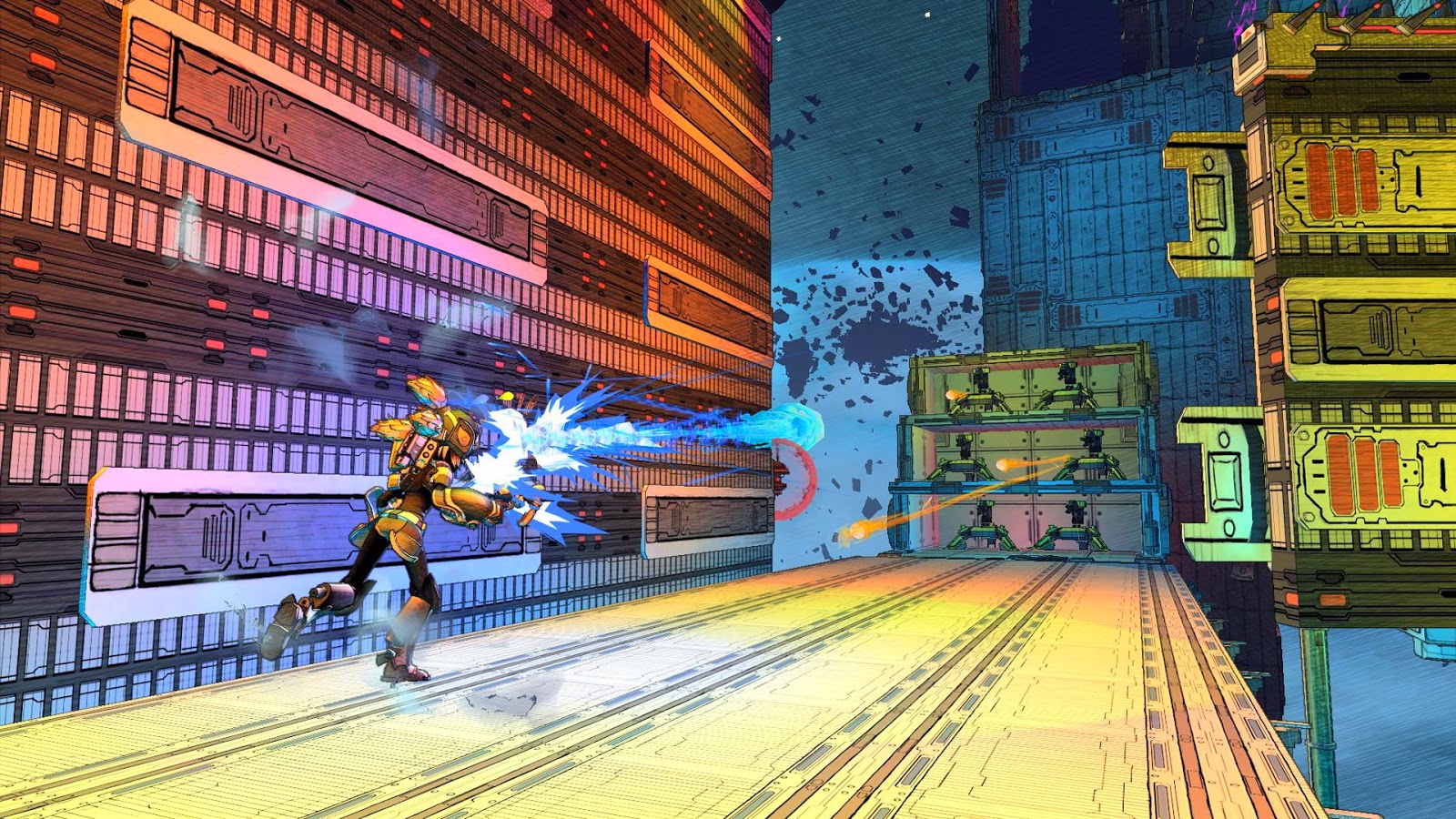 There is something about this soundtrack that has a “video game” quality to it. During gameplay sequences, it ranges from piano chords to an undeniable “wub wub” of dubstep; chiptune notes and synthesizers to symphony orchestras – all over the course of a minute. The music does vary from map to map, but each song seems to have a similar unrefined quality to it. Each track sounds like a two minute demo tape of an aspiring composer, showing their musical range based off a certain chord progression. It is not that the music is especially bad, but rather a meandering mix of generic themes. It still serves its purpose with high intensity drum and bass while in a level, and mournful piano when in story scenes or level select. I just wish it had done more to really grab hold of my attention and keep it.

Sound effects in game follow a similar line, being effective, while still seeming a tad off and unrefined. The sound of your character walking has an odd heft given your size. A fiery burst of your jetpack sounds oddly weak, and almost like a kart racer booster pad, not an explosion of fire. Nearly every jump or boost is accompanied by a vocal grunt from the character – I would not be surprised if the character were a professional tennis player in her day job. The myriad explosions, gunshots, ricochets, and enemy affects all sound rather alike, and blend into a cacophony. Truth be told, I played parts of this game with all audio muted, and felt I was better able to focus, even while playing other tunes in the background. 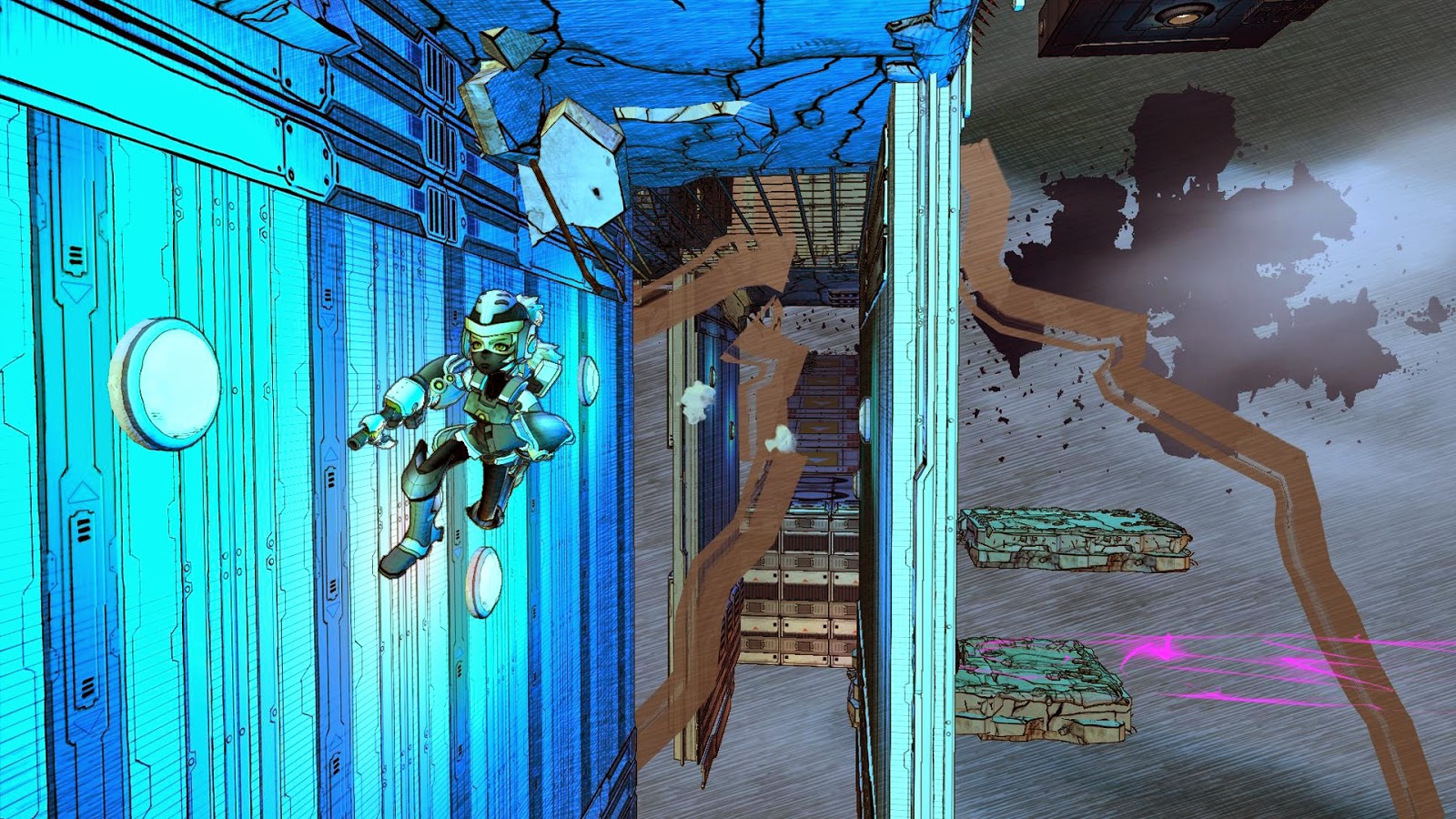 Actually playing this game is a frustrating, clunky struggle with controls that prevents the player from accomplishing what they want to do. The tutorial level really eases you into each individual concept (double-jump, wall run, wall boost and shooting), and in their own little vacuum, they seem okay. There’s not much verticality to double-jumps, changing direction when boosting up a wall has a bit of lag, and shooting is imprecise. But where things really fall apart is the moment you have to string any two of these together. Wallrunning, and need to jump to the next wall? Hold the jump button for more than the smallest fraction of a second, and you lose all forward momentum and wallhang, then jump completely perpendicular to the wall. Boosting up during a wallrun, and let off the boost? You still carry an unreasonable amount of upward momentum – often into a spiked surface or mine that you were specifically trying to avoid. Doing a jump between two vertical surfaces with the momentum and intent to carry on in a particular direction? It’s a complete crapshot as to what the outcome will be, as if the game makes a dice roll to decide between “Intended direction, completely stop all movement, perpendicular direction, or miss the wall entirely.” Even the camera was slow to react to some of the 90 and 180 degree changes in facing, which occasionally lead to a lack of information about what action to take next and ending in death. It did not feel as though any amount of practice in the games large practice area had any noticeable impact on my ability to control my fate. Because of this, the rare times where I was able to actually string two or three maneuvers together felt unsatisfying. This game demands a super tight set of controls, like Super Meat Boy or N+. It could even get away with a floatier, more forgiving system like Titanfall or Mirror’s Edge. But the troublesome controls lay a cracked foundation for the whole structure.

As if fighting with the controls was not bad enough, there are confounding design choices that exacerbate frustration. The whole system of enemies and being able to shoot them is completely unnecessary and cryptic. I can understand the challenge of a sniper turret that can shoot you off a ledge, or a flying robot that follows you and pushes you off. But the placement of these enemies is always just around the corner or out of sight, such that you can’t prepare for them. A sniper turret that is so far off in the distance that you are unable to see it, and the laser sight is so obfuscated by the visual business of the scene, can take you out in a quick shoot. Yes, the game arms you with a gun to shoot such enemies, but even that is inconsistent. Sometimes a quadruped will be stunned after a shot or two. Other times, you can clearly see bullet contact with the enemy model, and no effect – troublesome when you’re on a narrow platform, shoot it four times, and it just taps you off the edge. And if you don not shoot it is disabled body a few more times to knock it off the edge, it can spring up at a moments notice and come after you. Other enemies have shields that can be enabled after a hit, reflecting bullets back at you. The flying robot has such a shield, so even if you hit it once, it will just turn on the shield, fly toward you, and push you off into the abyss. If the controls were such that you could reliably juke and jive, you could probably get away with running past some (but certainly not all) of them. The game does offer a checkpoint system, but they are extremely few and far between, making trial and error a timely task. Worse yet, there is a finite number of lives that you have. Fast completion times of earlier levels will increase your number of lives in a given level, but when you run out of lives on a level, you fail and have to start the whole thing over again. 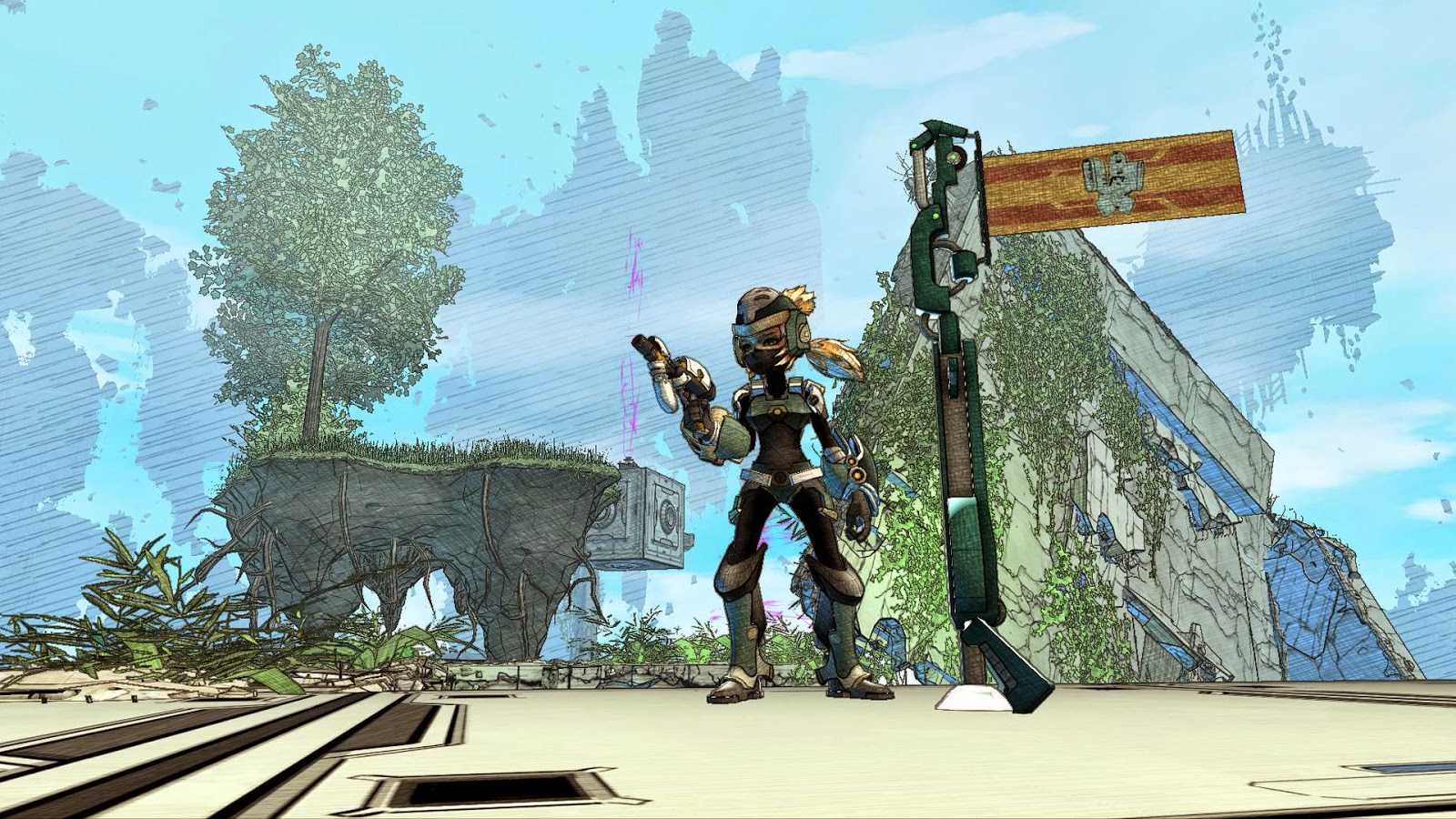 The game does have a story, but it is wholly unnecessary to this experience. Between levels, you are sent to what appears to be a hospital room, where a holographic outline of your character looks on over a comatose version of yourself. A voiceover containing philosophical ramblings about war comes on. What first serves as a bit of context for what all is happening in the world around you soon devolves into a muddied commentary on war and society. There is a tenuous connection between these interludes, and the levels you go into – presumably a subconscious dream state where you traverse your own broken thoughts and memories. Just as with every other aspect of the game, the story seems incomplete and an odd collection of disparate ideas.

One silver lining is the player choice that the level designers afford the player. At almost every possible juncture, there are multiple paths that can be taken to advance through the level. Some are simple – hop along these platforms for a relatively safe, but slow path, or wallrun down this pathway, walljump to another wall, and speed through the section to save a few seconds. Other locations provide many more options which are not immediately obvious until you take a different vantage point or replay a level. A jump that may not have seemed possible becomes clear once you see a different ledge that was just above your current position. A path that was full of mines could have been simply taken from the other side. Unfortunately, this brilliance is tarnished, as your choices are often between a rock and a hard place. Do I want to try and avoid these infinitely spawning flying orbs with shields, or try and wallrun and boost through an inconceivably narrow path between these mines? 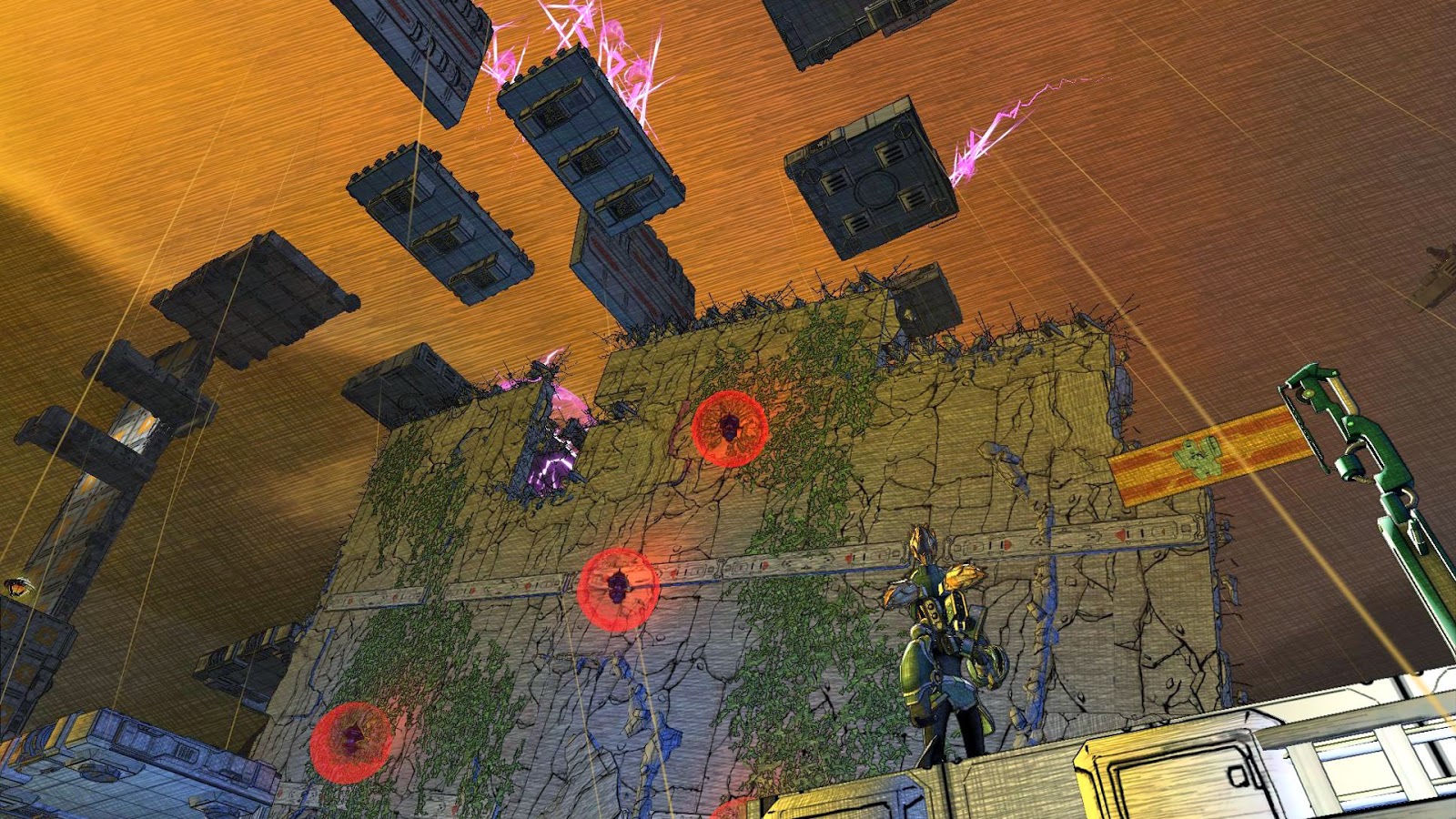 I really wanted to have a good time with Cloudbuilt. The concept of a speedrunning parkour is one that appeals to me, and static screenshots of the game are intriguing. But once you take direct control of the action and see everything in motion, that dream is quickly dashed. The game feels unfinished, something I would have expected to see in an Early Access category on Steam. Various creative minds came together and haphazardly threw their ideas together, and the result is a strange experience built on a shaky core. I believe that if the team were to step back and simplify the various aspects of this game, there could be a more refined, focused, and enjoyable experience. I would love to see them go back and re-approach the same concept with a fresh start, as the initial game mechanic is one that could use further exploration.