The original Deception remains one of my fondest video game memories. I never got the chance to play parts two or three, but the first one was an absolute gem when it released on PlayStation. I had never heard of it prior to its release, but the premise was unique on several fronts – both from a story perspective as well as the gameplay itself. Fast forward to now, and we have the latest iteration of this series seeing its release on both PlayStation 3 and Vita. 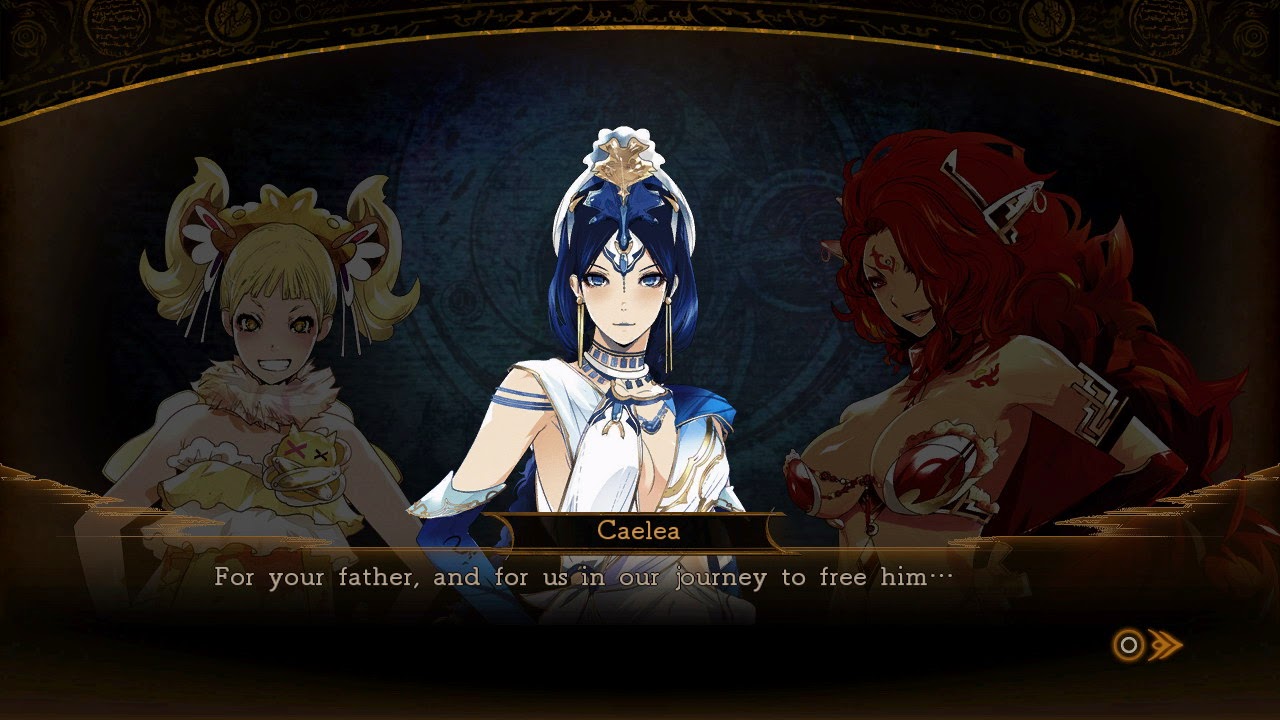 Robert reviewed and enjoyed the game on PlayStation 3, but he was coming at it as a complete newcomer. The original Deception was one of the first games where you are playing a villain. You were a somewhat sympathetic villain. The subtitle to that game was Invitation to Darkness, and the story revolved around you playing the part of a man who is sentenced to be executed wrongly. In the last moment before your demise, you wind up striking a deal with Astarte – or Satan’s Messenger. Your life is spared, but at considerable cost as you are put in charge of a castle where many visitors are drawn in for a variety of reasons, and you use a variety of traps and beasts to kill them and gain power.

Looking at this latest release in the series, Deception IV: Blood Ties takes on a much more sinister tone than the original. You play the part of Satan’s daughter, who is assisted in her evil deeds by a trio of female daemons. You play the role of Laegrinna, who was formed from a fragment of Satan’s soul. You and the daemons are tasked with retrieving an artifact called the Verses, which were broken up into twelve items and scattered to various decedents over the years. This is a far less sympathetic role than the one you are cast into with the initial game.

Many of the elements from the original Deception rear their head here as you have a mix of innocent people and self-serving mercenaries that venture into your dwelling. Sometimes characters will try to escape when wounded, making it a bit tougher to finish them off. There are still bonuses for trying to live capture some characters, but most of the time you will simply be looking for inventive ways to kill off the intruders.

Also like the first title, you have a variety of traps at your disposal. Deception has always had an interesting mix of action and RPG elements mixed together, and in many ways feels like an early form of tower defense genre. You attempt to lure people toward you – and they generally do so in a relatively straight line – as you then fire off traps. There is a lot of strategy in this portion of the game, because certain types of enemies have ranged attacks, or resistances and immunities to various types of traps. What works for one intruder may be completely useless against another. 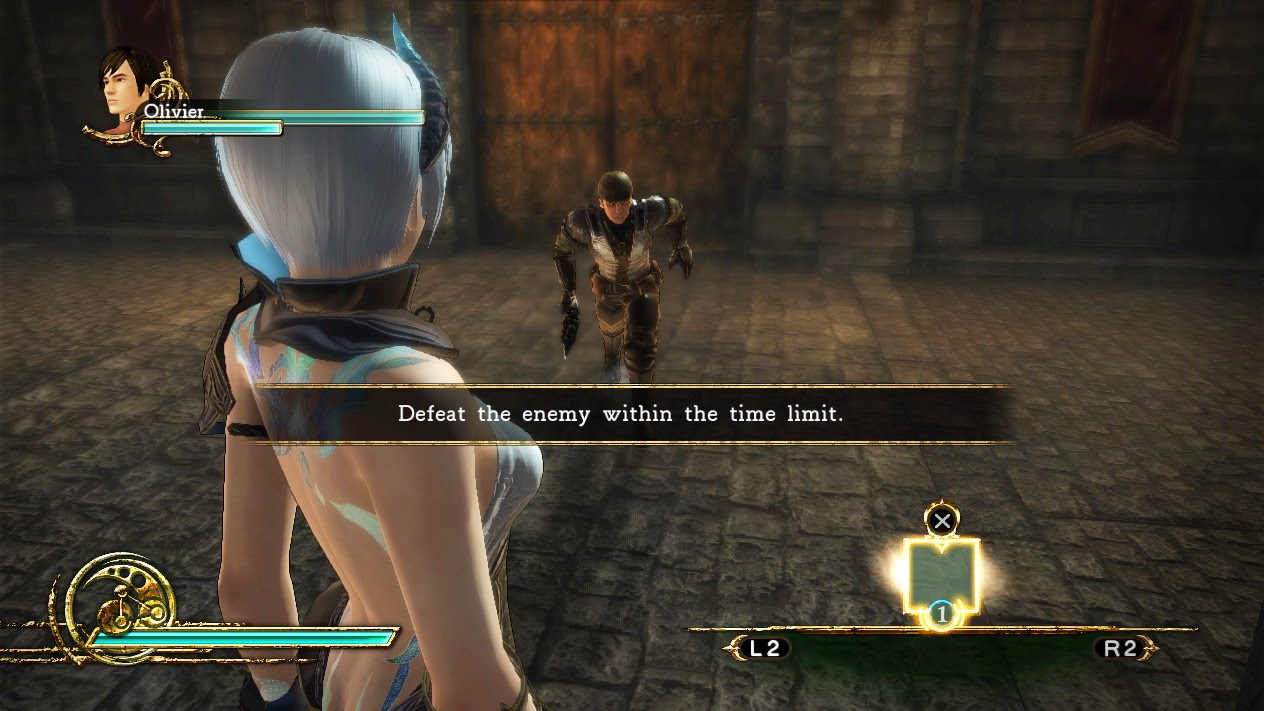 The graphics here are somewhat better than average. Character models look decent, and the animations on the traps are all rather fluid. There are a lot of interlocking parts here when you consider the environment, the traps themselves and the various people you are interacting with. Thankfully the game itself never seems to suffer from slowdown, tearing or pop-in textures of any kind. It helps that each area is walled off into a particular room. You do not have to deal with distant horizons or anything like that. The lack of loading screens is also impressive as you wander about the various locations from one room to another. Unfortunately the characters have a tendency to move rather stiffly, the environments are somewhat bland and often lacking in detail. Thankfully there is usually plenty of movement in the environment, which makes the smooth framerate even more impressive. 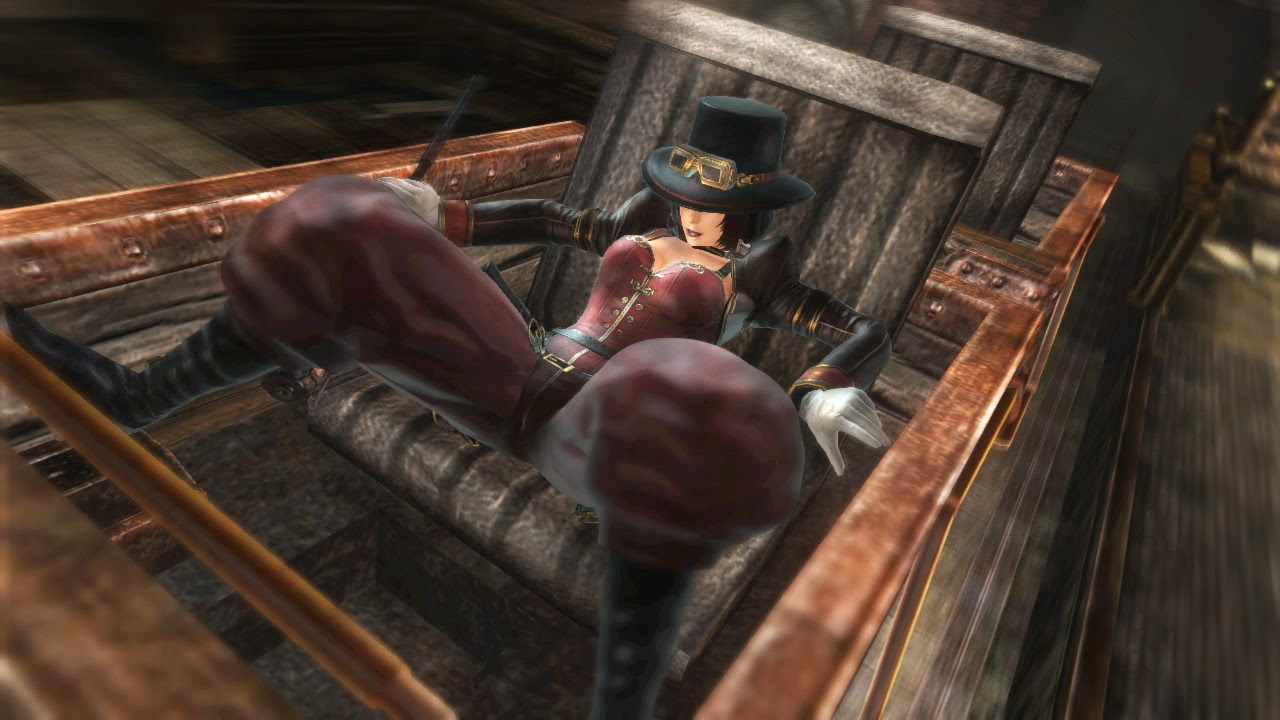 The soundtrack is equal parts tense and energetic, which often suits the pace of Deception. After all, you are creeping around old buildings laying traps to kill people. There is voice acting, but it is all in Japanese. Robert was a big fan of the voice acting in his review, but I was a bit disappointed by it since I prefer actually hearing and understanding what is being said without having to read it every time. The sound effects are good and varied, and they are useful here as well. The sound of a door opening or a spell being cast or a dagger clinking off of the wall nearby might be your only warning that you were found and are now in danger. 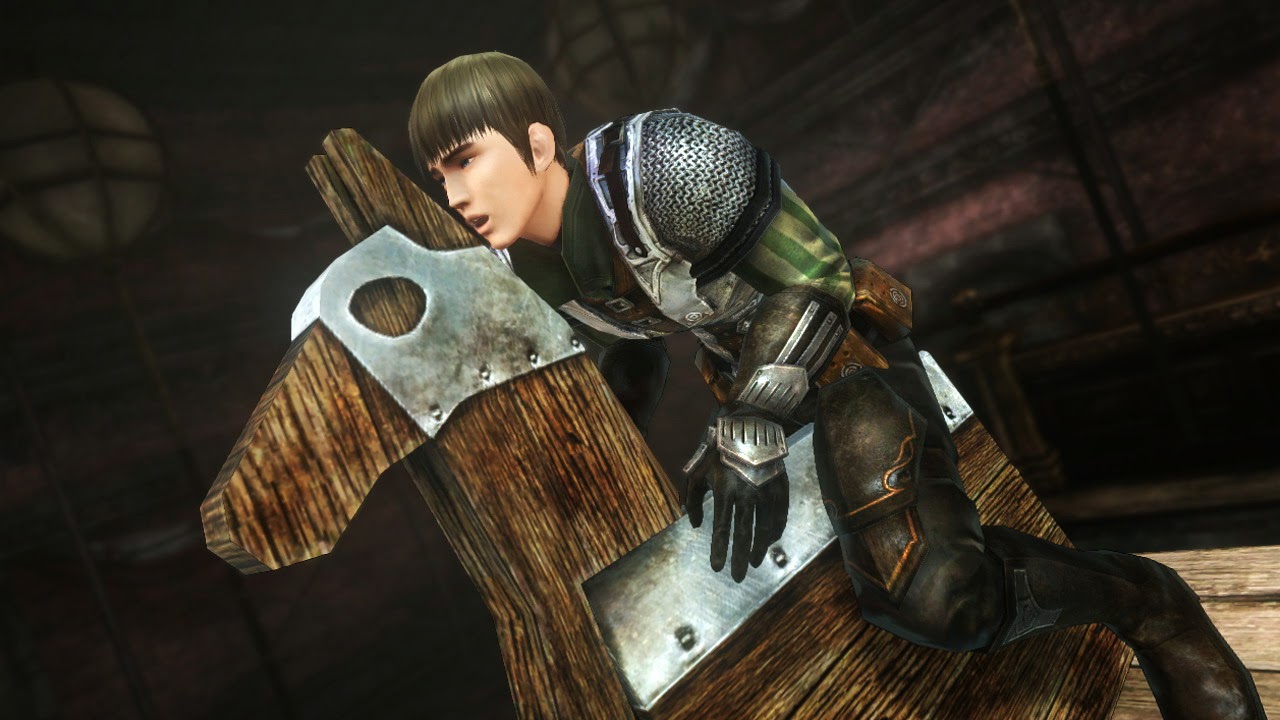 This is a tough one for me, but after quite a bit of consideration, I cannot help but feel like this part of Deception has not aged terribly well. Traps interact with one another on a lot of levels, and there is a ton of fun to be had on that. The original game was easy to take advantage of. You could lure enemies down narrow hallways with tons of wall spikes and simply do away with them that way the vast majority of the time. Here those kinds of cheap tactics are not allowed as you are often surrounded and in a more open area. There are hallways that link larger rooms, but those hallways are kept trap-free. The environment here is more important than ever. You can have organ pipes drop down onto hapless intruders, have them get caught in a bomb dropped by an overhead machine, knock pillars and chandeliers down onto them and more. This part of the equation is excellent.

Unfortunately your character handles poorly, even when using a skill like dodge that allows you to try and roll out of trouble. As part of the game’s essential premise, your protagonist is helpless herself. She has no skills or combat abilities of her own that allow her to melee opponents. She can learn moves like a roll or auto protect that help, but the game is designed to lure your enemies into traps you can then trigger. The problem is, you can get absolutely destroyed in a matter of seconds due to bad placement, and never have a chance to recover. I had full health when a mage, a ninja and a swordsman all cornered me. The mage hit me with fire, so I could not roll, The swordsman lunged in and struck me from a pretty good distance. As I was attempting to get up, the ninja kept double slashing me over and over again. By the time the fire was out, I tried to roll away, but the lunging swordsman still hit me and killed me off. In the span of about four seconds I died and had to repeat the prior half of an hour.

While the somewhat clunky controls for your character were one point of frustration, the other is the lack of ability to save more frequently. Perhaps I have just gotten spoiled by more frequent checkpoints in games, but you can literally spend close to two hours without seeing a save point. Thankfully there are checkpoints sprinkled in – themselves a bit sparse for my liking, but no saves. If you are struggling with a part and just really need a break or have to go somewhere? You are out of luck – you have to repeat the entire chapter again. I suspect that issue is slightly mitigated with the Vita at least, because I can simply tap it into standby mode and go do what needs to be done, but having played the PS3 version as well and seen the structure is the same? It feels like those saves are too infrequent there. 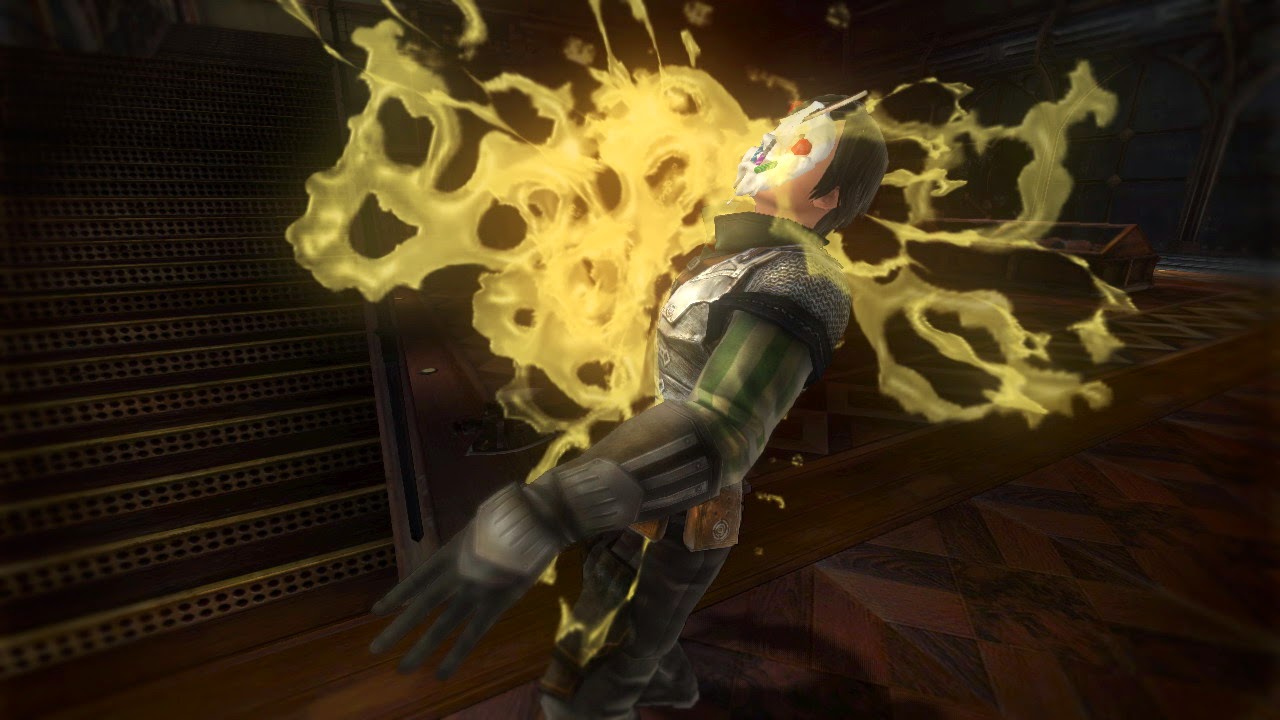 There is a lot of game to be had here, and if you enjoy the basic formula you will not be bored any time soon. For starters you have the story mode, which is not short by any means. There is also a mission mode, where you are put into a single room with conditions to meet within a time limit. Sometimes you need only kill your enemy. Other times you have to trigger a combo of four. Cross-Quest is an innovative mode that lets you create missions you can upload for others to play. You can also download those made by others. This adds a ridiculous amount of replay value to the title.

Additionally some gains were made in the themes of the traps – with humiliating, elaborate and sadistic themes. Humiliating might include dropping a pumpkin on someone’s head or putting a rake in their path to step on and bean themselves with. Sadistic is all about the blood and blades, with spikes that protrude from walls or buzz saws that descend from the ceiling. Elaborate falls in between, with mechanics such as boulders you can roll down the stairs and then push back up using the springboard – potentially running the same intruder over two or three times if you time it perfectly.

You gain experience and currency while unlocking new traps, abilities and costumes along the way. These unlocked items offer some nice progressive hooks that keep you coming back for more. I miss the leveling system the original game had where you could improve upon your favorite traps a couple of times. I liked the sense of customization that came with your castle in the original Deception as well, but that too is lacking in this version. Thankfully every few chapters or so, you scurry off to a completely new location. That provides you with something new to learn and different opportunities to take advantage of the fresh environmental traps. 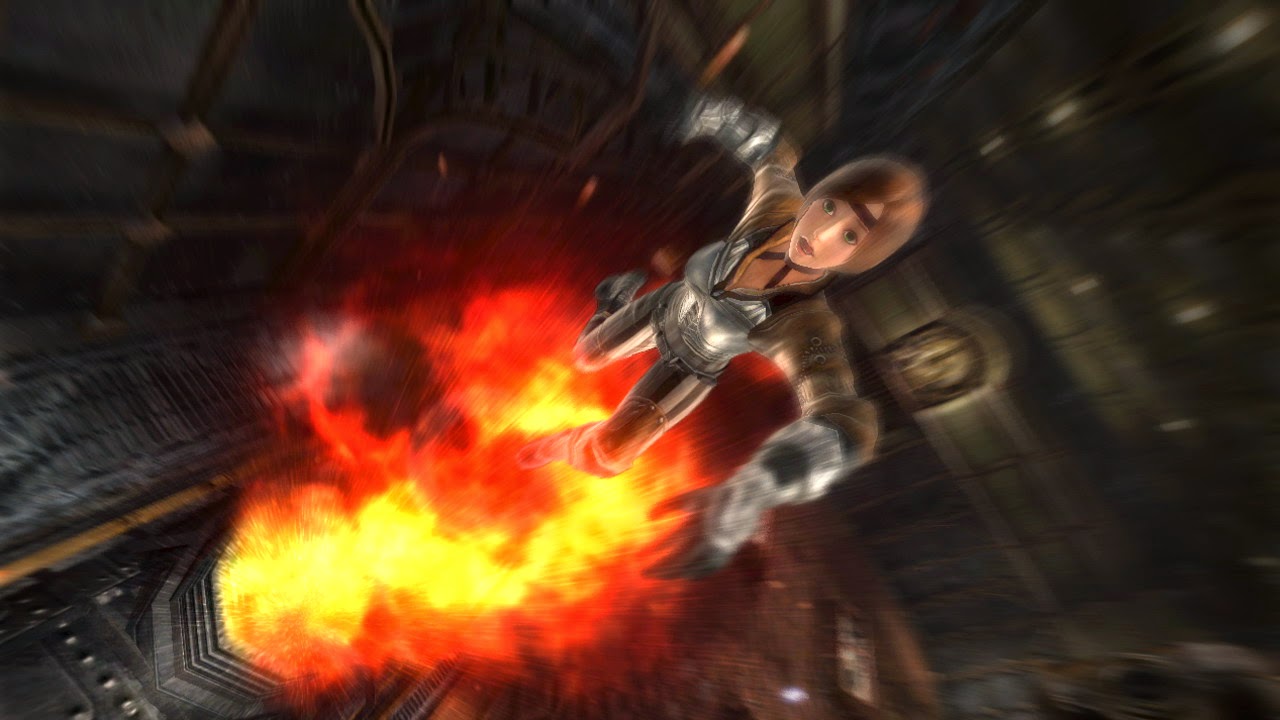 I am very happy to see this franchise getting dusted off and brought back on more modern consoles. There are still a good number of throwback items that absolutely tickled me. I was amazed at how natural it felt all these years later to put spikes in a wall or to drop a boulder on someone. I could appreciate newer twists as well, such as having to springboard someone into a cage instead of simply dropping one on the hapless intruder like I did in the original title. That macabre sense of being on the side of evil permeates the proceedings and shows up in the sound, visuals and the often sadistic nature of the gameplay itself.

The biggest disappointment comes from some of the features that could have used a bit more modernization. Deception IV: Blood Ties is not a forgiving game. It can be hard, frustrating and sometimes just a bit too stuck in its roots for its own good. That, with a slower mix of gameplay and strategy may not appeal to everyone. That said, I actually think there is a larger audience for Deception now than there was fifteen years ago. More games cast characters into villainous roles now and tower defense has become an entire genre.

I come away from Deception IV: Blood Ties feeling as though there is a real audience here Tecmo KOEI could resonate with in the future. It may require a few more tweaks to modernize the series a bit more, but it feels as though this blast from my past may have a bit more life left in it.