There has been a lot of talk about another MMO of late, the recently released The Elder Scrolls Online for PC. Making fewer waves but presenting a better overall game was the PlayStation 4 version of Final Fantasy XIV: A Realm Reborn. This title has been out for several months now on PC and PlayStation 3, where it was warmly received by both critics and the community, but this is our first full review of the game – and we thought its recent release to PlayStation 4 was the perfect time to take a step back and look at it. 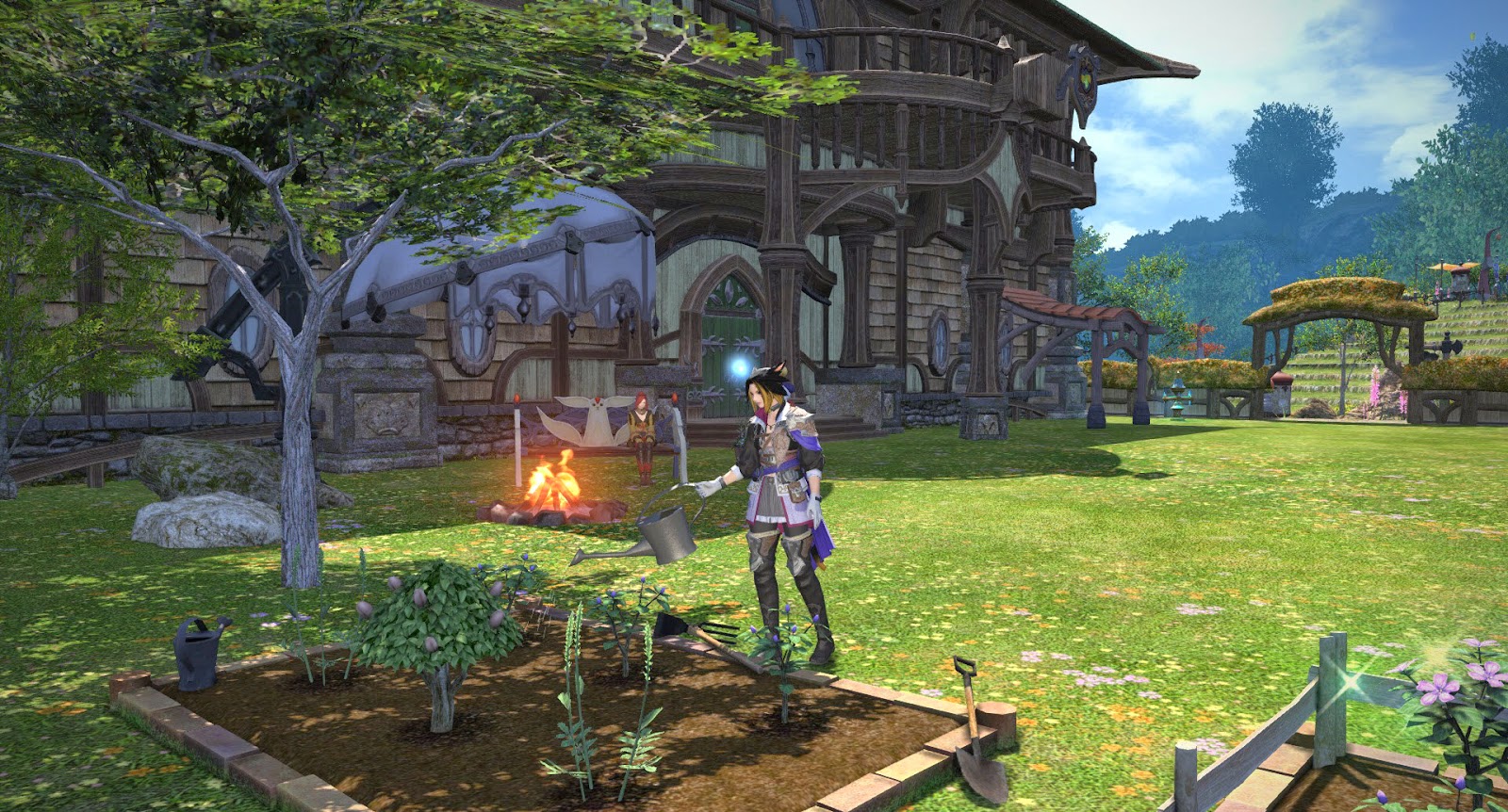 This is not the first time Square Enix has taken their Final Fantasy series to the MMO arena, but it certainly feels like their best offering. A gorgeous video introduction greets you when first starting the game, and then you get to delve into one of my favorite aspects of any MMO – the character creation. There is enough variety in the races, sub-races and class types to keep characters from all feeling the same once you venture out into the world for the first time.

For those familiar with the MMO structure, there are few surprises right out of the gates. You are introduced as an adventurer, new to the area and seeking face, fortune or glory. Of course, those lofty goals are well out of reach at the beginning as you are brought along on your adventure rather slowly. You are introduced to important parts of the city and the surrounding wilds through various fetch and kill quests. These often provide you with additional experience, currency and items above and beyond what you would earn by simply killing things at random in the wild.

As you gain experience and levels, you open up new skills, more quest options, a gradually advancing primary storyline and more. So far people who have spent years looking for golden exclamation marks over NPC heads in World or Warcraft or crafting items in an Everquest game are probably quite familiar with these conventions, but thankfully Final Fantasy XIV: A Realm Reborn offer enough new twists to make it feel free, yet familiar.

One of the more interesting features is the ability to shift classes by changing the type of weapon you are using. This is a good deal more flexible than what you see in most other games. Of course, if you are pumping yourself full of stats that relate to a melee class, you might make for a poor healer, but in principle you can switch classes quite easily. Each class has its own level, so you start off at the introductory level of 1 for each and still have to invest the effort in improving. This applies to the crafting classes as well, which you obviously will not use in combat – but you can switch to a smith’s tools to start creating armor or weapons while in the city.

The FATE system is not new, but it is pretty similar to something that we found in Guild Wars 2 and that worked really well both there and here as well. There was already plenty to do as you wander around the countryside, but these larger group activities that spring up all over the map give the world of Eorzea a sense of living, breathing and changing existence. 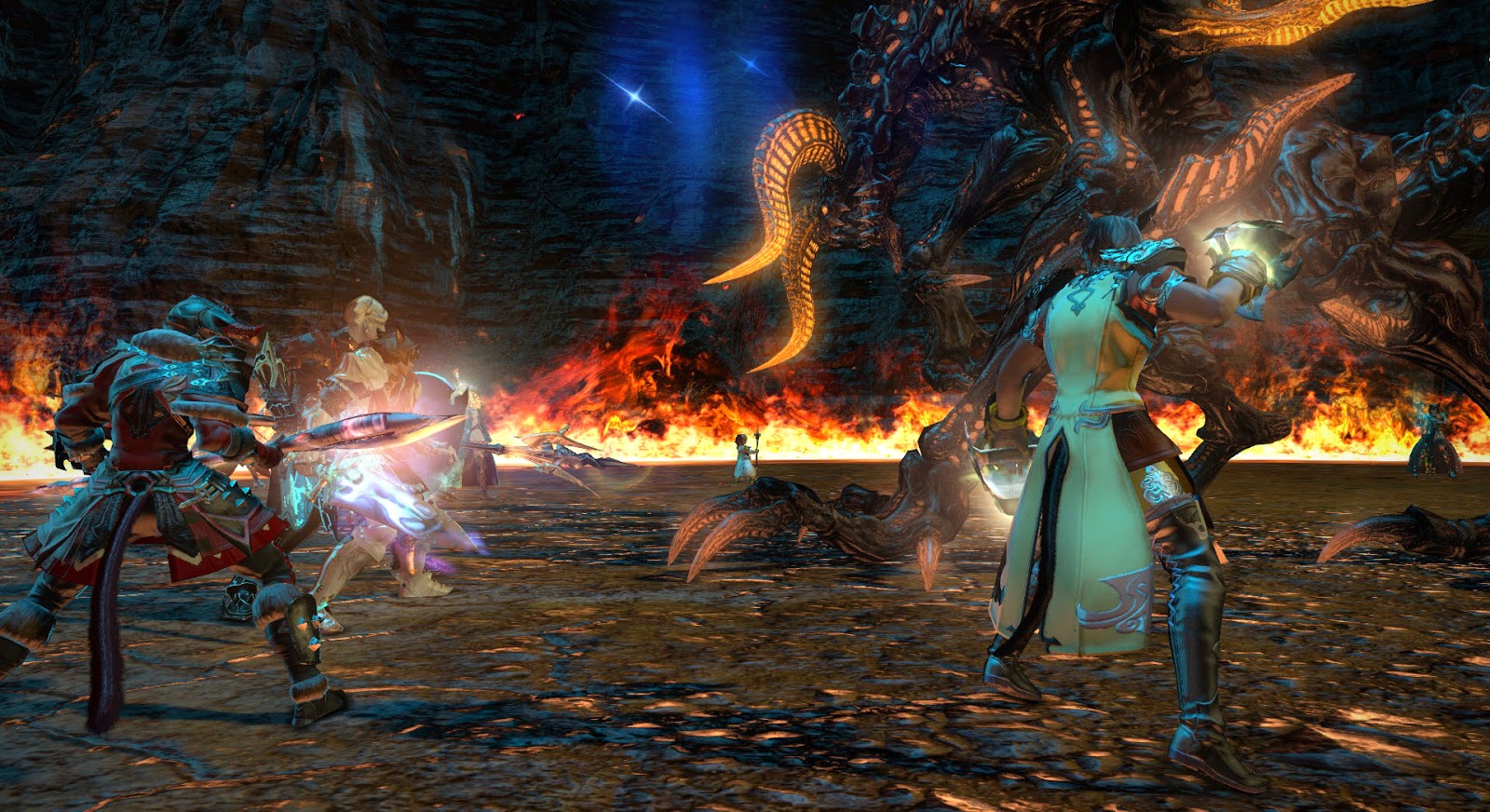 Final Fantasy XIV: A Realm Reborn is a very beautiful world, both from an artistic direction and also on a technical level. On the PlayStation 3 it looked nice, but the visuals paled next to its PC counterpart. While a top of the line PC is still going to outperform the PS4’s visuals, the gap is quite small. Textures are detailed and do not pop in at the last moment. Characters move well and enemies have a great deal of variety to them. Exploring the land is visually appealing due to the expansive, differing landscapes. Rolling hills, high mountains and running rivers of water all look as inviting as many of the more barren and haunted landscapes appear daunting. Cut scenes and movies are stellar, as one would expect from Square Enix. 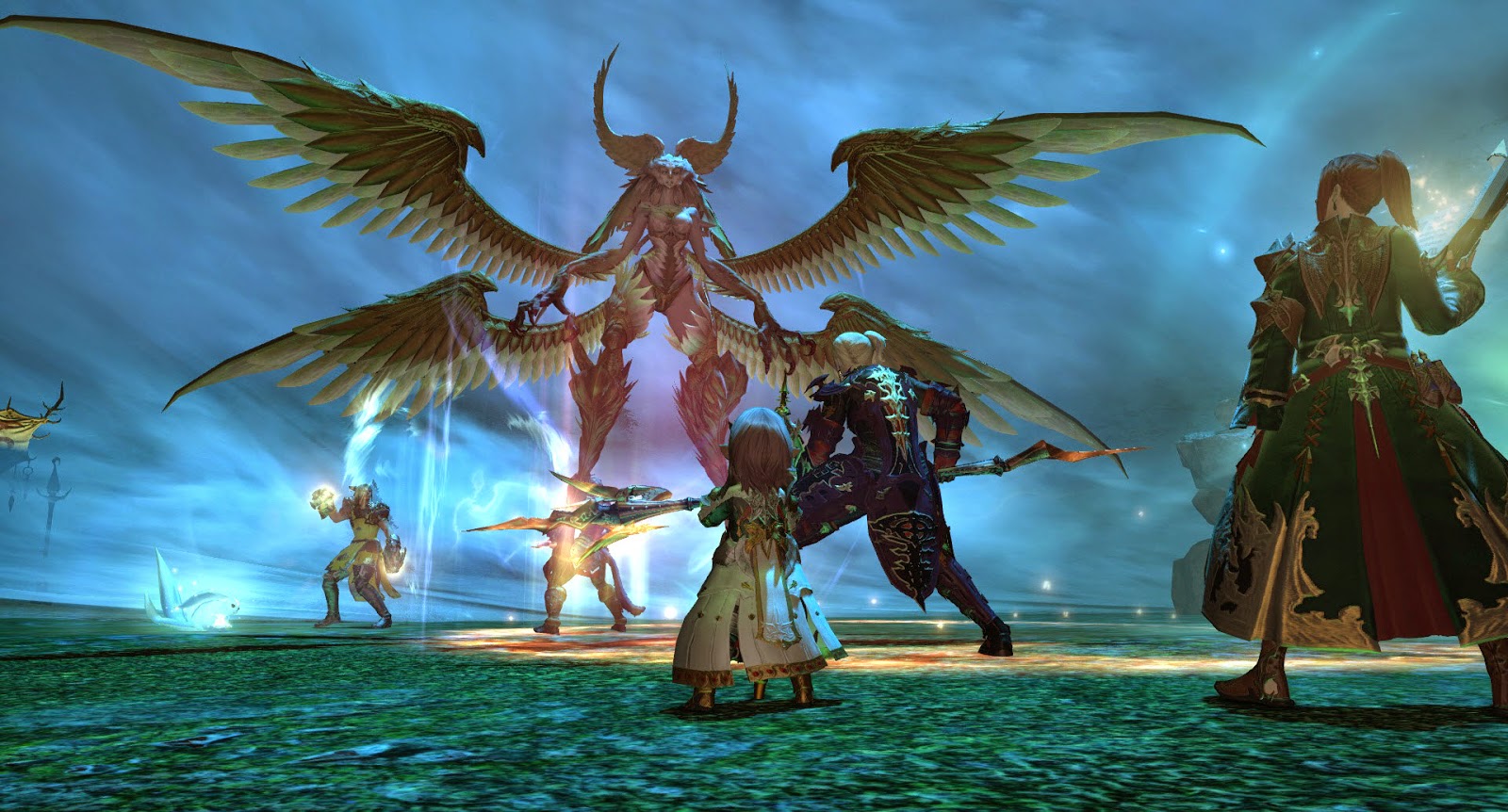 The music continues the strong tradition of the Final Fantasy series, appropriately soft and enchanting during a forest as it is tense during combat. New takes on familiar tunes add a warm sense of familiarity when heard. The sound effects do their job, letting you know when an enemy has become alerted to your presence and is coming after you or a nearby spell is being cast. The voice acting is good enough – when it happens. I have become so used to Final Fantasy titles having loads of voice acting throughout that the more cinematic parts of the game when there is none is almost jarring at first. I adapted to it quickly enough, but the intro simply ‘threw me’ with its lack of voice early on. 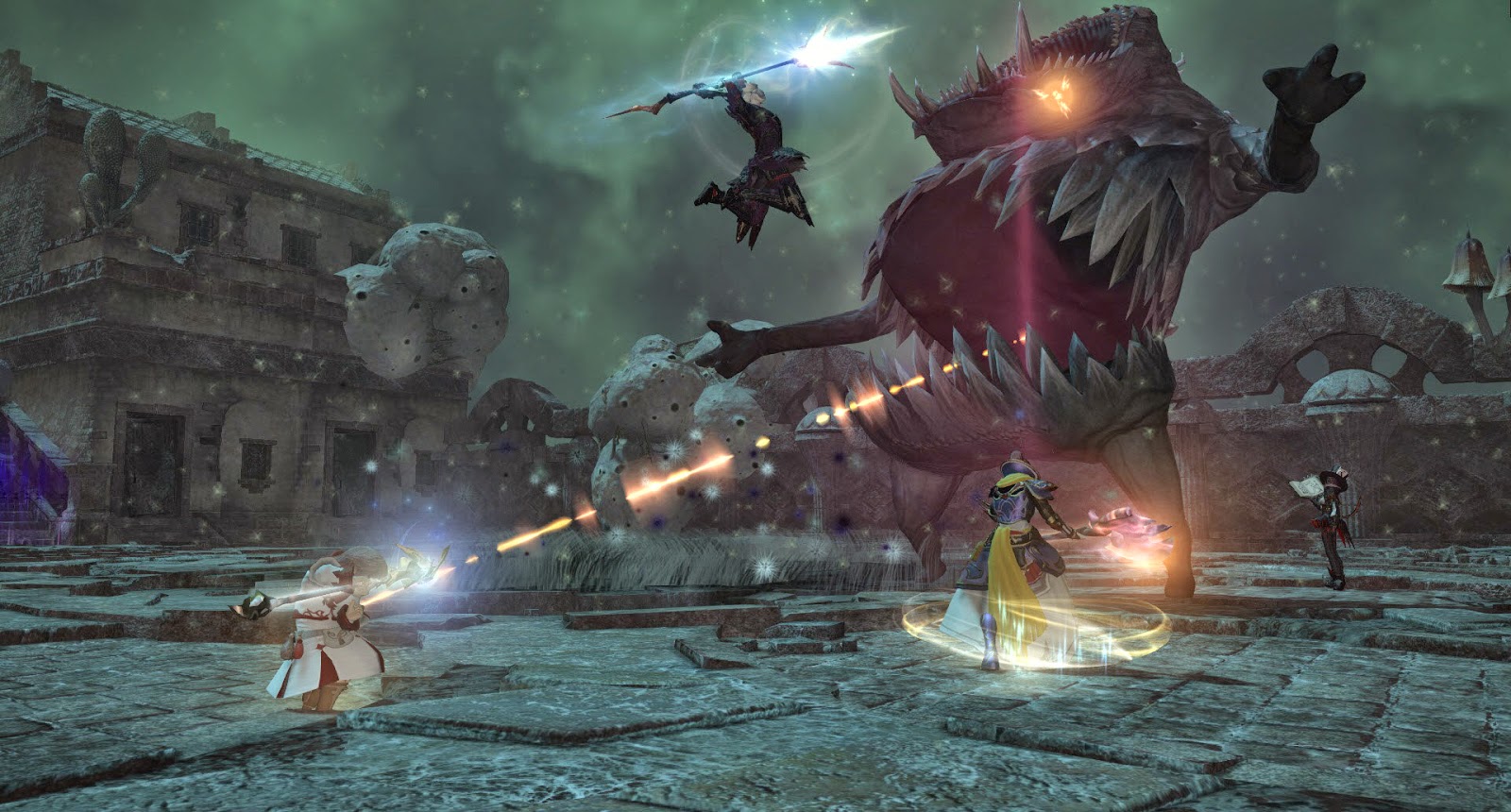 I am basing this score on the controller. Everyone will have their own personal preference between controller or using a mouse and keyboard combination. Thankfully if you do prefer the latter, you can plug and play into the PlayStation 4 and have that experience, but by default people will be using the controller. Movement on the controller is excellent. The use of the left stick gives you more natural walking movements than the often strafe-heavy keyboard keys do. The mapping of hotkeys to specific buttons works really well here. I was actually surprised at how many immediately accessible skills I had at my disposal using this system.

Navigating the map and menu can be a bit more tedious, but the PS4 gets a nod over its older sibling, the PS3 because of the touchpad on the controller. The PS4 touchpad makes it a bit easier to navigate the screen and select what you want to use with a quick tap. Given how responsive (almost overly responsive) the pad can be at times, using it efficiently can take some getting used to, but once you have it is quite effective.

In almost all games I prefer a controller over a mouse and keyboard. This goes for shooters, platformers – and in this instance and MMO as well. 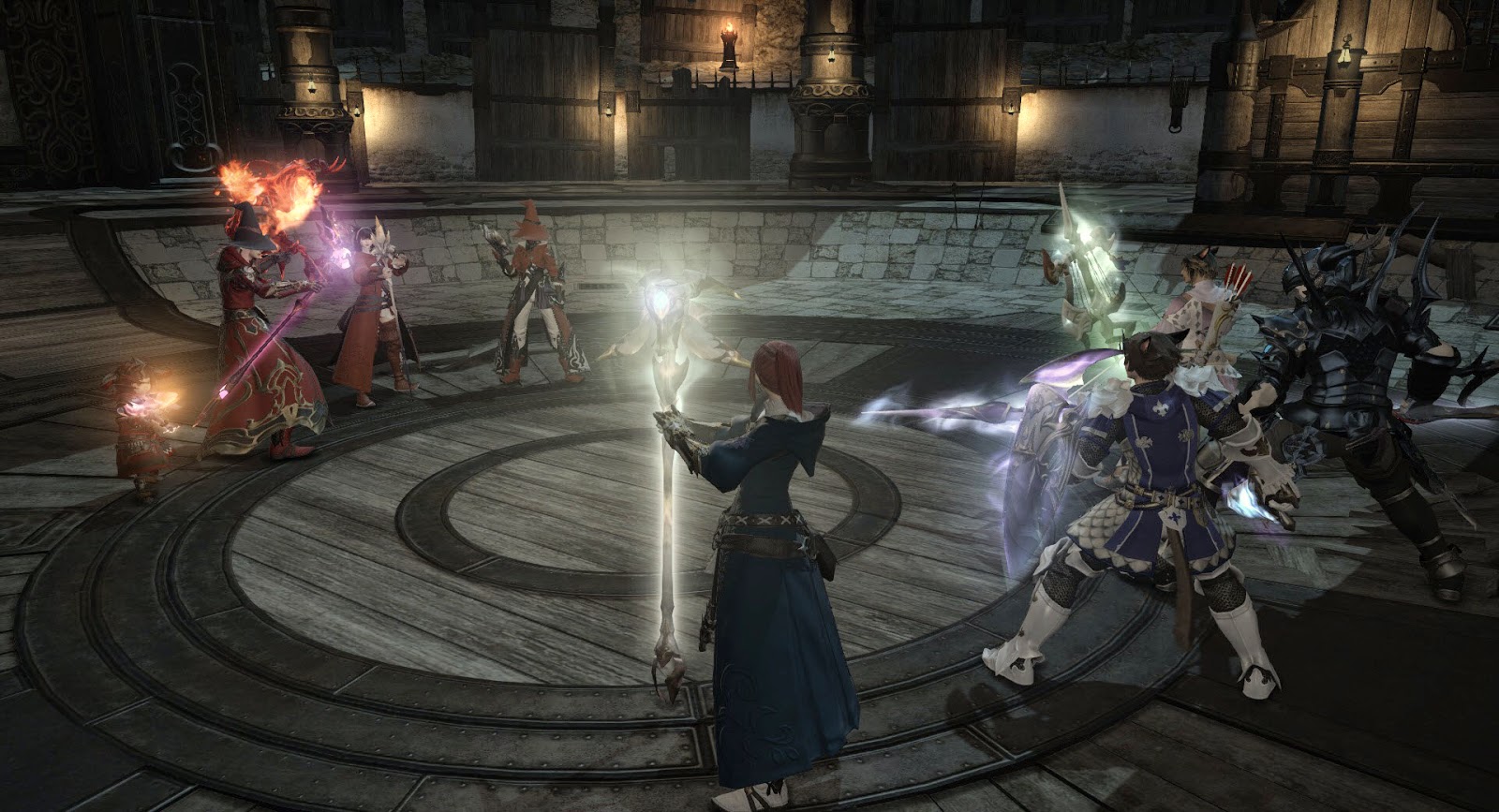 MMOs are perhaps best known for having an absolute ton of content. Pets, chocobos, quests, discovering new areas, participating in different FATEs and crafting are all among the various very effective hooks A Realm Reborn has to offer. Getting through the content takes time and effort, but it is a lot of fun to do. I am an odd MMO player, in that I tend to solo through the levels. I realize by definition, you should be playing with others, but something that easily ops in and out like the FATE system is more appealing to someone like me, and I can appreciate the fact that there is a storyline I can partake in without feeling like I need to be in a group (at least until near the very end if I want to participate in some of the top end game content).

The subscription based model is one that often comes under fire when examining MMOs, and A Realm Reborn is no different. With excellent titles like Guild Wars 2 out there for a single one time cost, it can be hard to justify paying a monthly subscription. That being said, Square Enix has been coming out with a good deal of content, whether it was for the PlayStation 4 launch or to celebrate Lightning Returns or a holiday. All of that extra content is welcome and I have no problem paying extra for it given the number of hours this title can easily absorb. 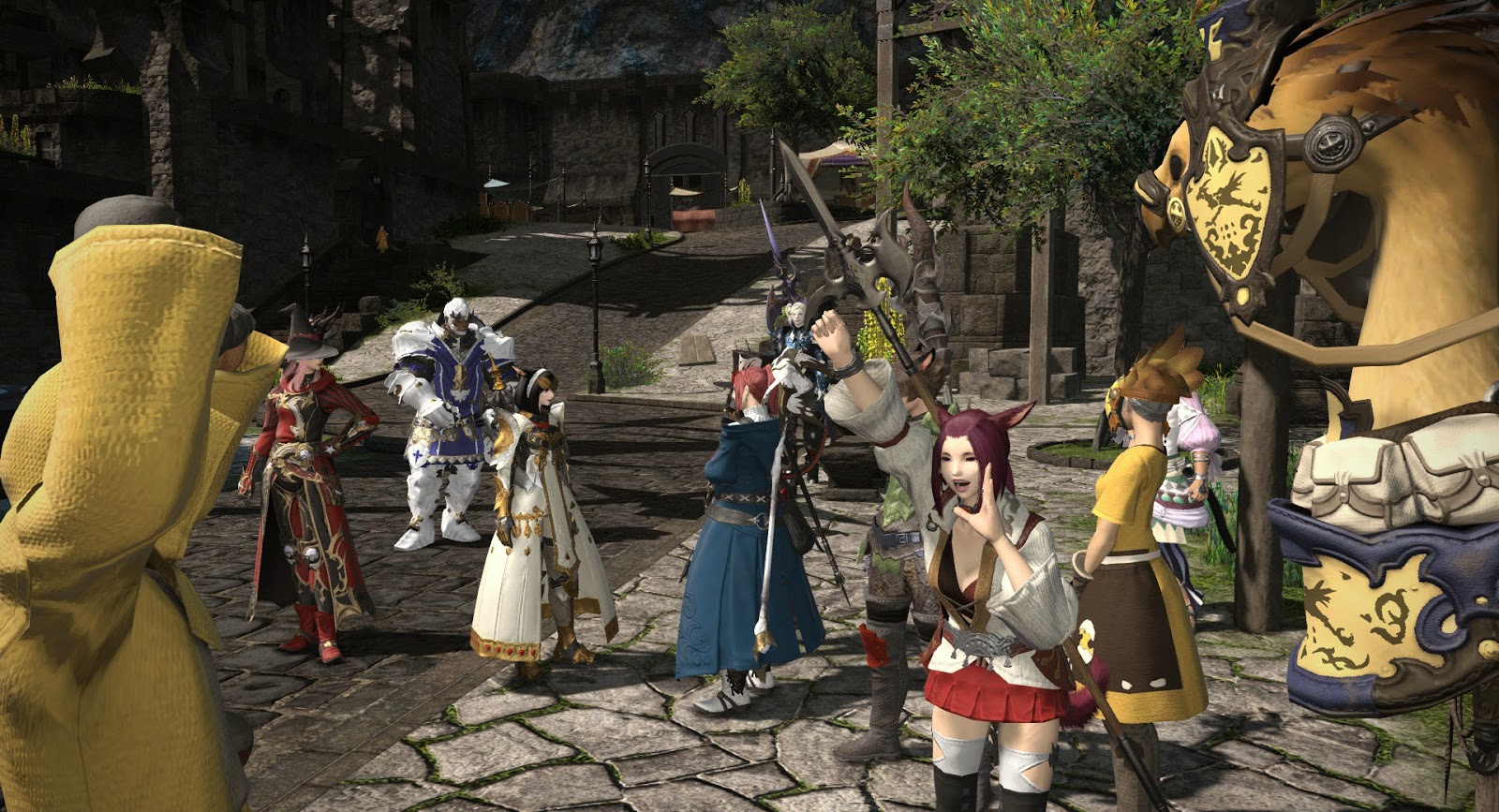 The presentation values wrap up an accessible, entertaining package in Final Fantasy XIV: A Realm Reborn. The subscription fee may be a point of concern for some players, but if you do not object to paying out a bit each month for a regularly improved and expanded upon product, then you should find a great deal to enjoy about this game.

The process of upgrading from PlayStation 3 to PlayStation 4 was also fairly painless. It felt a little odd right at first, more like a PC experience with updates to the launcher, then updates and patches to the game itself. It took a bit of time to get the ball rolling on it, but as soon as the process completed I was able to log in with any one of my characters without any difficulty at all.

MMOs have a tendency to appeal for several different reasons. These reasons are hardly new – most of them were the same reasons that MUDs were incredibly popular years before their design principles provided the backbone for earlier graphical MMOs such as Ultima: Online, Everquest, Dark Ages of Camelot and World of Warcraft.

The sense of community, the ability to ask for or provide help to those who need it is one of the most common reasons. It is a social activity from the comfort of a person’s home that is not bound by real life issues like friends living in different zip codes. Most of my old D&D group used World of Warcraft as our mechanism of play years after we all moved apart. Others like the opportunity to show off what they can do in the game. Final Fantasy titles are usually single player affairs. No matter how impressive you make Cloud, Auron or some other character, in the end you can take video or screenshots but not interact with other players in any meaningful way. MMOs provide a means of showing off what you can do via equipment, special crafted items or in PvP (player vs player). These social hooks, when combined with the progressive ones found in RPGs help make them an almost addicting experience for a lot of people – myself included. That Final Fantasy XIV: A Realm Reborn handles so many different facets of the game so well makes the experience all the more enjoyable.