XGen Studios is one of the first developers I can think of that had me spending multiple hours playing Flash games. Defend Your Castle, Stick RPG and Motherload (all available on their website) are games I still toy around with, even some 10 years after they were released. The one that really took me by surprise was Motherload – essentially a side scrolling action game, based around the idea of mining for minerals on Mars. Suffice it to say, when I saw that there was a new version of Super Motherload released on Steam,  I was excited. 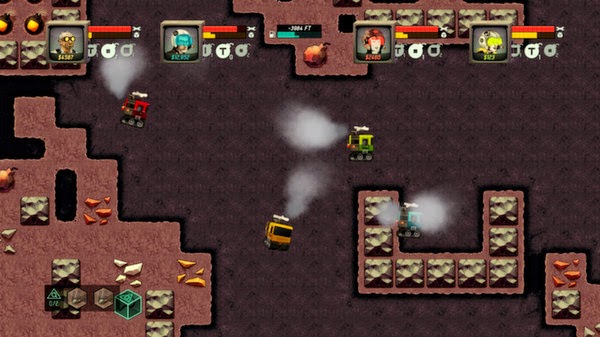 Super Motherload puts you in the role of a newly contracted employee in the Solarus Corporation. After landing on the planet’s surface, you are left with no contact other than the occasional radio update from your supervisor, Tiberius, and a helpful AI named Mr. Fix-It. The martian surface contains a refueling station for your mining vehicle, a repair station to fix any hull damage you sustain from careless maneuvering, an ore processing station to sell your collected minerals to, and a shop to buy upgrades and items. The mission is simple – dig beneath the surface to collect ore for Solarus, and the deeper you go, the greater the rewards.

The game is played on a 2D surface, providing some lateral movement – about 2 screens worth that can be traversed in just a matter of seconds, and an untold depth below the surface. Your vessel is equipped with a mining drill to mine through dirt and ores, a cargo bay to collect said ores and a helicopter prop to allow you to fly upwards. Your drill and helicopter use fuel, which you must purchase on the surface in order to keep digging. You do seem to have an unlimited helicopter backup system, allowing you to ascend when your tank is empty, albeit at a slower pace.

And so it all starts, simply enough – You start digging to collect basic Bronzium, Ironium, Silverium, and Goldium, bringing them to surface when your cargo is full or your fuel is low. Sell your precious ores, top off your tank and stop by the shop to see if you can afford an upgrade. Some will increase your fuel or cargo capacity, others increase maneuverability or durability of the ship. The shop also sells bombs which can be used to take out sections of the soil around you, though destroying minerals in the process. As you descend further into the depths, it becomes clear that these bombs are required to complete some puzzle elements, forcing creative usage to open up paths to otherwise unobtainable rewards. It also becomes clear that you are not alone on this planet, and as you plumb the depths, a more nefarious plot emerges. 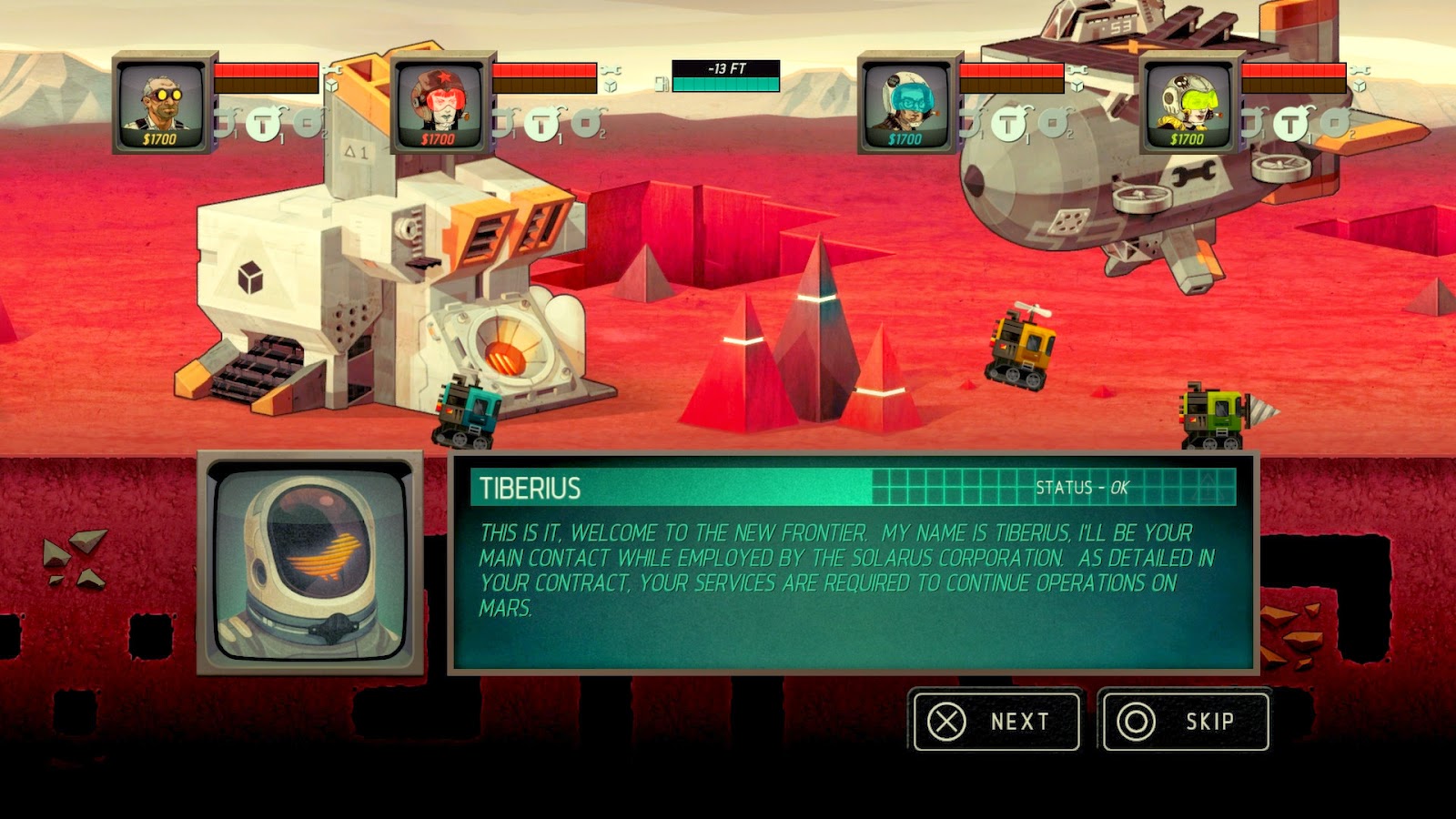 There is an undeniable style and character to this game, evident right from the loading screen. The main title card has a inarguably “modern” feel to it, a celestial backdrop that is dramatic and inviting, reminiscent of a Fez or Journey. Character portraits and vessel design have a cartoony appeal to them, somewhere between an anime and saturday morning cartoon. The few buildings and structures you encounter on and below the planets surface have a gorgeous hand drawn quality, as though you would see them as a canvas print hung in a trendy lounge or coffee shop. Voice overs and alerts (the closest the game has to a cutscene) have a retro-future vibe, a combination of a Metal Gear Solid codec and Fallout Pip-Boy 3000. Where it struggles a bit is the sheer repetition of block types. There’s some interesting design in ore patterns, block layout, and color palette swaps, but you’re still only able to get so many different elements on screen at once. Since this is really what the game revolves around, it can get a bit stale. It’s like driving down a beautiful forest road. Though the scenery may be gorgeous, if you have to drive down that road for 3 hours, it will lose its lustre. 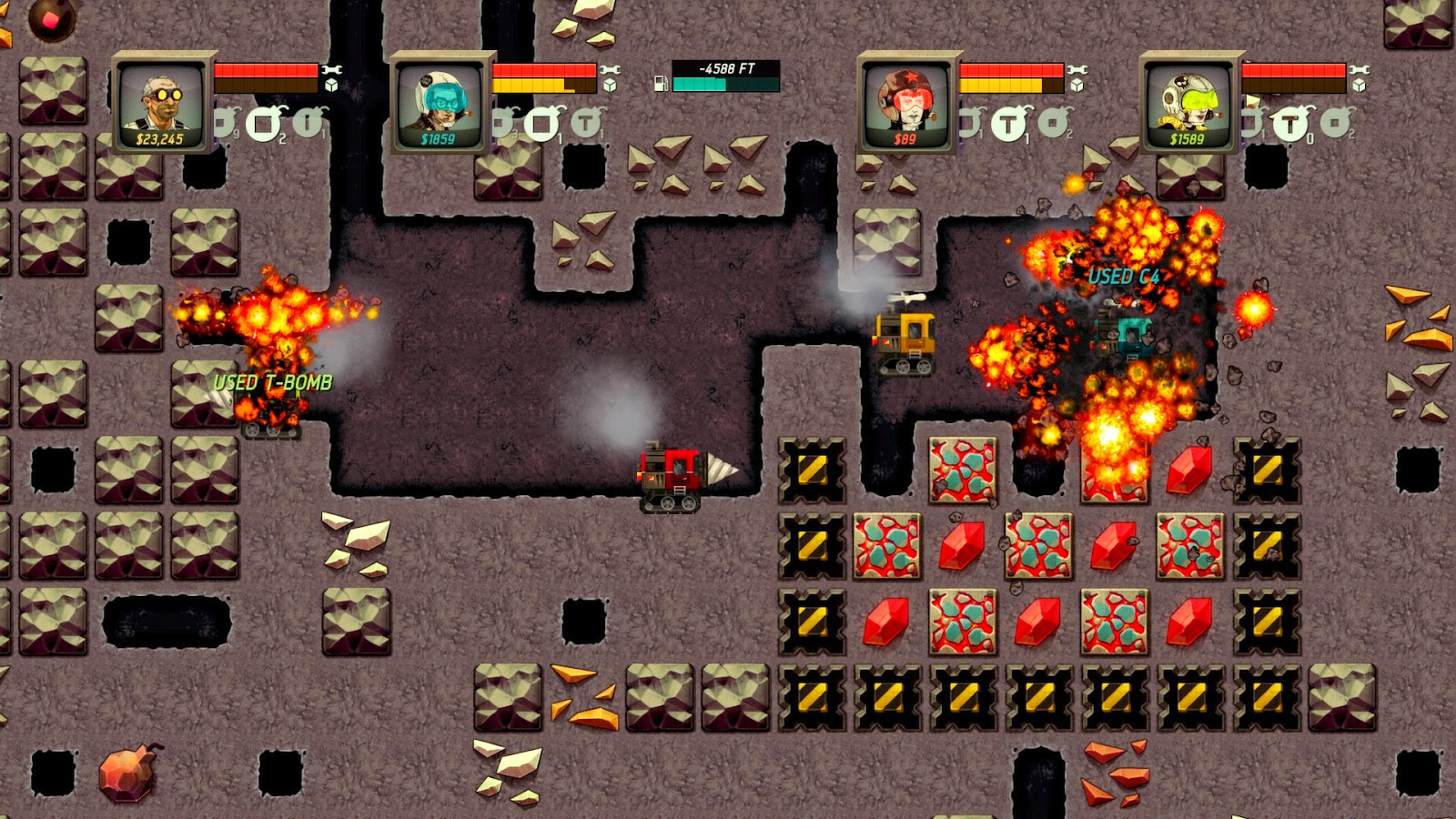 The soundtrack to this game was a real surprise to me. The game could have easily fallen into using a simple background filler track. Instead, XGen worked with an electronic artist named Eric Cheng to create music that is evocative and engaging. The best way I can describe it is as one part electro synth pop from the 70’s and 80’s, one part planetarium laser light show and a current day indie edge that really brings it together. Just like the Hotline Miami soundtrack from last year, this is an album I actively listen to even outside the game. Tracks range from a rather soothing opening theme, akin to a cheerful elevator toon. Later in the game, a frantic rhythm will emerge, providing a stronger sense of urgency and an adrenaline rush that is almost entirely manufactured. In reality you are in no more danger than before.

Where this category gets docked a few points comes from implementation and voice acting. What few other sounds there are in the game (drilling, flying, bombs, etc.) are harsh, especially when they are forced to loop. The loop for the helicopter sound, something that you will experience quite frequently as you ascend and descend your mineshaft, is exceptionally jarring. There are even times where there is audible static from an odd frequency with the ascent or descent speed. Even the music tracks had times where there was outright silence for minutes, or a sudden restart of an audio track after a story point. The voice acting is hit or miss as well. With so little voice acting to be found in this game, the two or so poor examples stick out like a sore thumb. 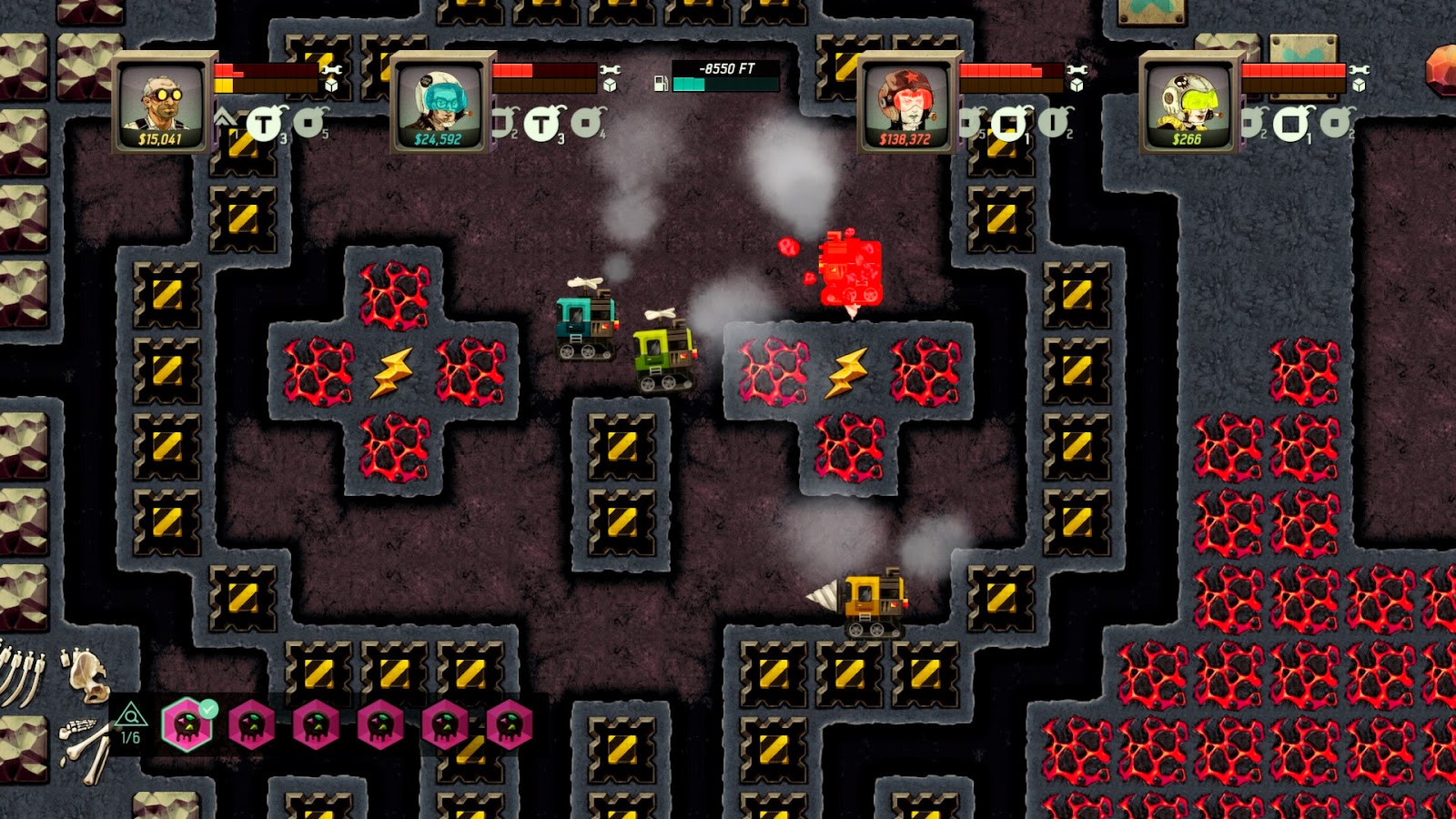 The game does have that core gameplay loop of “dig deeper to get better minerals, to afford better gear, to dig deeper…” which is engaging to a point. The problem there is that progression – a mere question of descending deeper – becomes gated by purchasing those upgrades. Before long these upgrades start to get rather expensive, making the game a bit of a grind. Were it not for subterranean stations to be found, and a mildly engaging plot incentive, you would truly feel like the nameless Employ 1001 that you are.

There are attempts to incentivize creative thinking and problem solving that are very interesting, but fall just a bit short of their intent. There are certain puzzles that are comprised of rocks and panels, which are indestructible with your standard drill. It requires creative use of your bombs to reach a reward – often in the form of higher valued gems. While these first few puzzles can be quite valuable, the further you descend the more you realize that it is easier to just dig deeper and find those same gems naturally in the dirt. There is also a Smelter upgrade for your vehicle allowing you to collect ores in a specific order, which in turn upgrades the resulting ore and saves inventory space. As an example, mining a Bronzium then a Silverium gives you a Sterling Silver – this only takes up the space of a single ore, and is more valuable than both combined. That being said, is it worth searching for those elements back to back if there are strings of Goldium or Ironium around? Mining a series of the same ore back-to-back yields immediate financial reward, presumably as Solarus Corporation rewards you for your efficient mining of the same ore.

The worst part of all comes in the last moments of the game. Without going into detail, a rather predictable plot twist changes the flow of the game entirely. Without proper preparation – something the game makes no attempts to enforce or encourage – you will find yourself redoing the final segment multiple times. Especially if you, like me, are unable to decipher what it is the game wants you to do. Or worse yet, if you are completely unequipped. 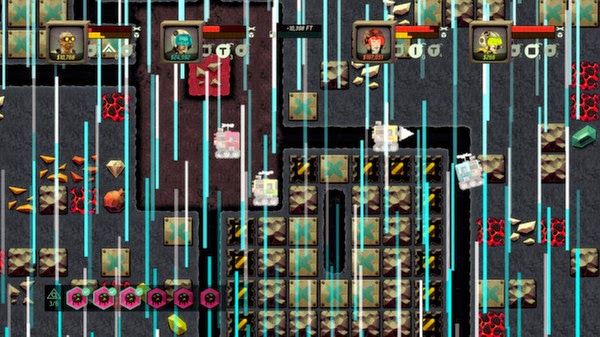 This game is short – I clocked in at roughly 4 hours start to finish. I am fairly certain that my experience with the prequel made me better equipped to push through the game, but I also paid a bit for my negligence of the newer upgrades this game offers. There are some gameplay hooks such as unlockable characters, multiple endings and multiplayer available – but each of these features seems tacked on and ultimately unnecessary. There is a pure, narrative experience that could have really been tapped into if you were locked into a single character. The illusion of character choice is immediately shattered on starting a replay, as the same events transpire. In general, there is a competing sense that this is a great, first standalone release for XGen, but also a collection of half-explored ideas and styles that do not have that cohesive glue that is needed to bring it all together. 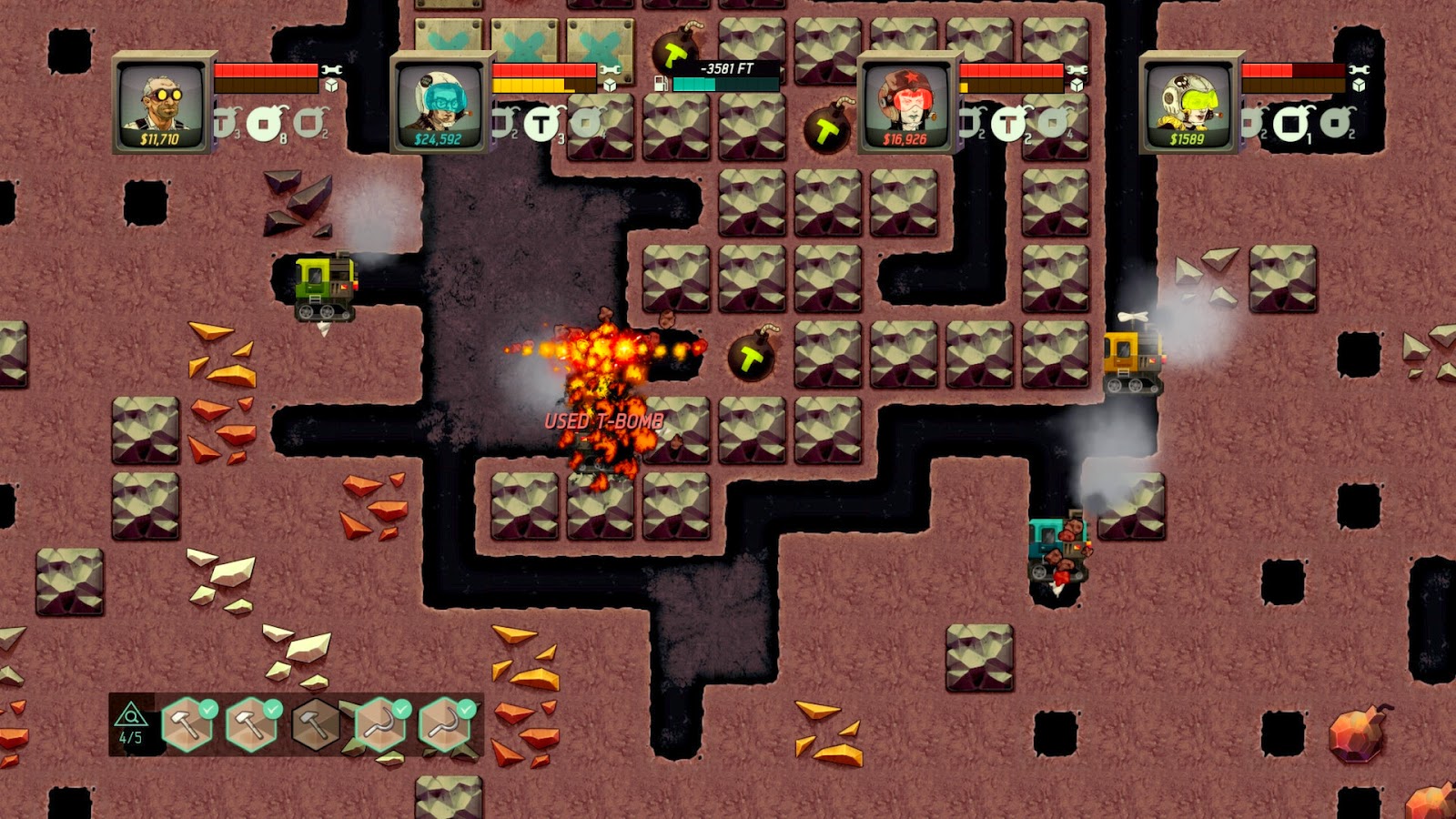 If you have the ability to set aside an afternoon to play through this game, it is well worth the experience. Despite some missed potential, Super Motherload stands well on its own as a unique experience. The mild puzzle mechanics presented by this version and that simple RPG-like mechanic of advancement do just enough to keep the game interesting. Where the game really shines is in terms of audio and visual creativity. If XGen is able to leverage some of the style that oozes from this game, they could have a real engaging experience on their hands with a sophomore offering.