The Trials series of games from developer Red Lynx has really carved out a niche for itself since the original Javascript game in 2000. The first Trials game was a browser-based take on the motorcycle sport of Observed Trials, a sport wherein riders must use their skill to traverse a complex set of terrain and obstacles without breaking contact with their bike. The mechanics of the sport translate well to a two-dimensional plane – your motorcycle rider can accelerate or brake, and lean forward or backward. The skill comes in by timing bursts of acceleration with proper leaning to approach various inclines, gaps, and jumps. 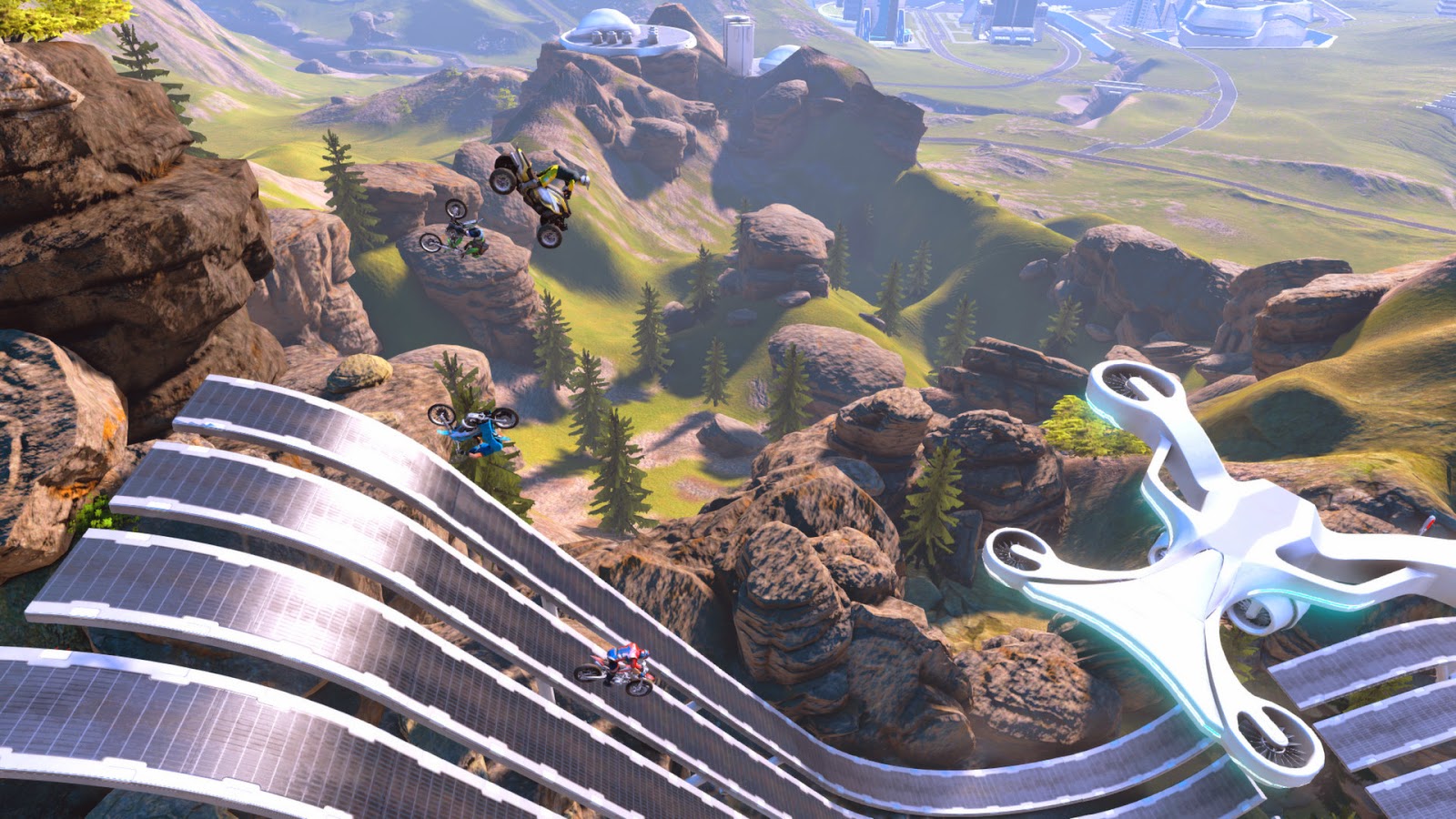 I still remember sneaking in games of Trials and Trials 2 during my high school computer classes, always being so enthralled with my rider controls that I was too late to notice the teacher scorning me over my shoulder. Since moving to consoles and standalone PC downloads, Trials has really pushed for a more fantastical and engaging experience, but is Trials Fusion a leap in the right direction, or a hesitant misstep? 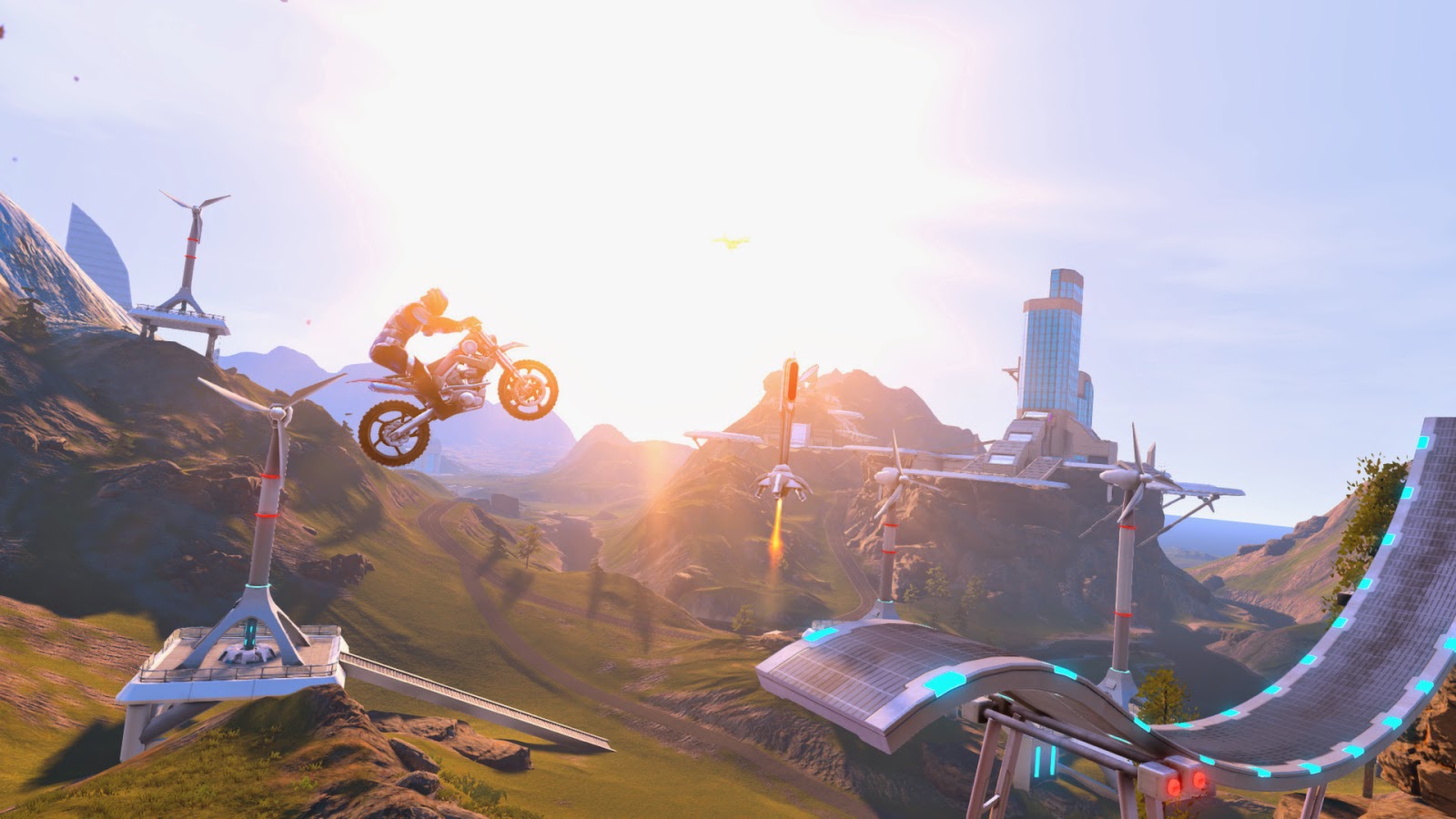 The last few Trails games (HD, Evolution, and Fusion) have had a seemingly exponential amount of resources spent toward providing eye candy for players and spectators. Though the games roots are set in an indoor stadium, Fusion now has players careening through futuristic cities, martian landscapes, ancient deserts, factories, and even a Tron-inspired future. It is clear that the designers let their imaginations run free within loosely defined bounds. For example, the Arctic map set will have a craggy mountain pass for one map, a snow-filled city the next, and what looks to be high-tech solar panels built upon a snow-covered mountain after that. Though each have a sense of snow and cold, there’s still enough variation in each map to keep things from feeling stale and stereotyped. It’s all too easy to name a set of maps called “Cactus Challenge” and make them all Egyptian or oasis inspired. While those elements are there, there are maps with futuristic cities encroaching on those tropes. There is also one of my favorite maps, where you are riding through a sunset on a wind-mill filled desert. It is such a beautiful backdrop that really changes the way the game feels and plays, just for a moment.

While cruising at high-speed, it can be easy to miss some of the track design and environmental touches in the backdrop. However, this also makes it easier to overlook some of the texture pop-in, aliasing, and shadow behavior. If you take a second to catch your breath, you will notice vast wind farms, cityscapes, canyons, and Tesla towers. No two maps are alike, and though there may be similar textures shared in each map set, there is really no shared similarity in each maps design. It puts you in a healthy mindset of curiosity, a “How is this level going to present itself,” rather than a “Oh, I played this one 10 levels ago.” Where things can get a bit dicey is if you pay close enough attention to the textures on these designs, or god forbid, on the shadow of your character. Each level is quick to load, but it seems that some of that loading is offset by textures popping in mid-track. It’s reminiscent of Unreal Engine pop-in, but I can’t confirm officially if that is the engine at play here. Worse yet, is if you ever happen to catch your shadow on environment geometry. It is a highly aliased, extremely framey and often rough estimate of your current orientation. It would be better served if there were an amorphous blob than the jagged mess that is projected. 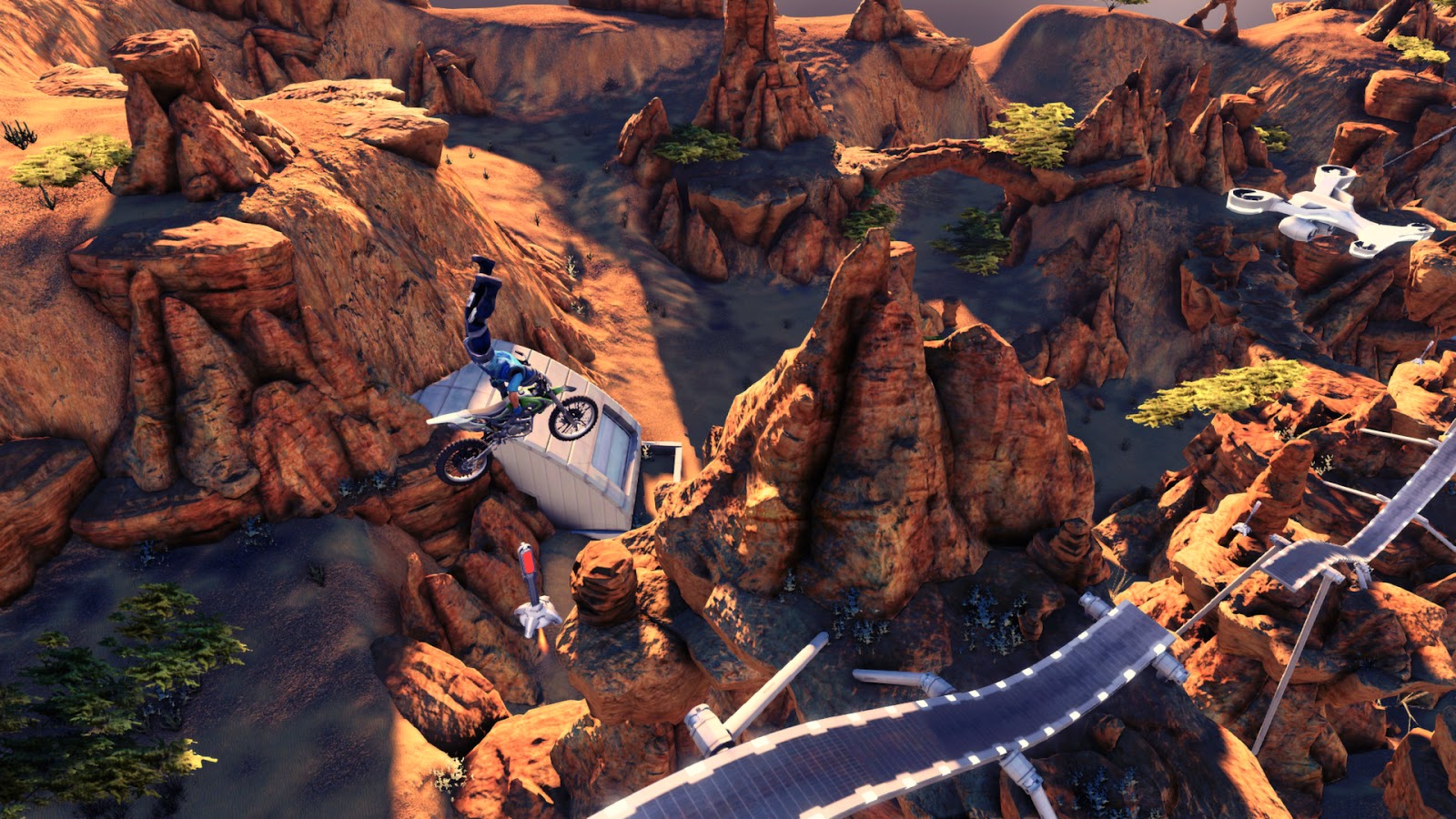 If I have to hear the musical verse “Welcome to the future. Man, machine, the fusion!” one more time, I might snap. The games title track contains this lyrical genius, but the song will also begin every time you are brought to a track select – which happens to be every time you finish a level. While you can beat the song by loading a new track before it gets to that point, it’s not enough to stop it from being a strangely grating problem. And while the song itself is intentionally campy (as were its predecessors in earlier games), the music played during a race is less inspired. It is effective as a tense and energetic backing track for each level, but it does not feel personalized to each environment, and it is ultimately forgettable. When you throw in an overzealous sound of engine revving, squeaky suspension, and rider grunts and yells, the music is almost a subliminal experience.

The voice work in the game is a strange beast unto itself. There is clearly a story that the developers are trying to tell, with a male and female AI. The male sounds something like a friendly subway announcer, stuck in a set of safety warnings and friendly reminders. The female voice is somewhat more self-aware, having a bit more personality, and even showing some emotion – both affection towards the player, and disgust towards her male counterpart. Though there are unique elements to these roles in each level, focus is given to the exact wrong elements. If – or rather, when – you get stuck in a certain part of a level, you will hear the same inconsequential line of dialog repeated time after time. However, if you’re cruising through a level, hit an actual story element, but happen to crash while it’s being said? You will miss the rest of that line and have no way to re-hear it, unless you completely restart the level and don’t happen to bite it at that same point. This makes it hard to care for any sense of story being portrayed, and frankly it encourages the user to fully silence these dialog points in the options. 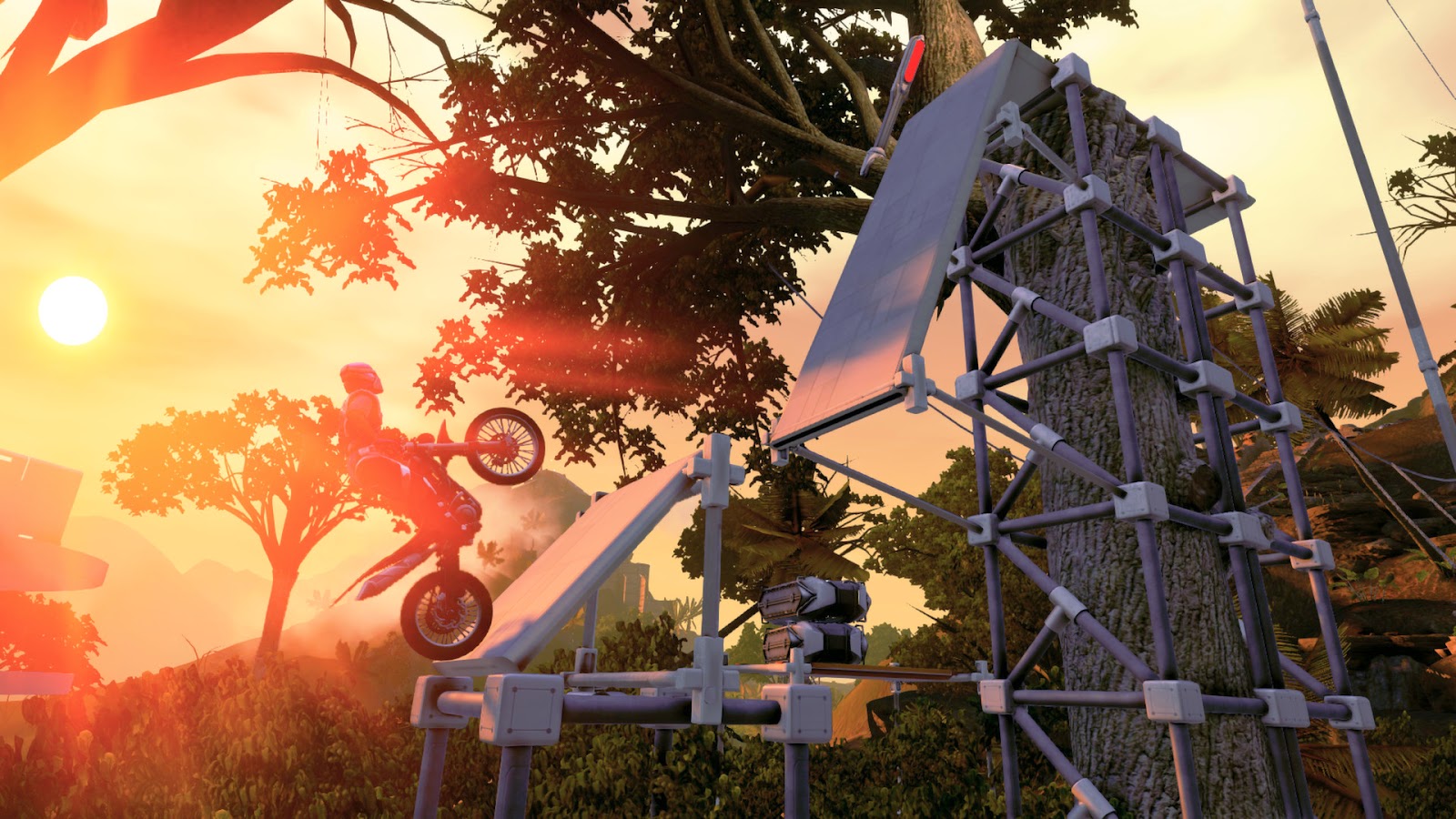 While the game does retain it’s simple focus on acceleration and leaning, it looks to add new elements in terms of a trick system and a 4-wheel All Terrain Vehicle. The fundamentals of this game have always been solid. The bike and rider have a set of physics applied to them, which really put the focus on momentum and positioning. If you lean forward on the bike while in the air, the bike itself will react and tip forward with you. If you lean forward while coming a hill, your back tire may pop into the air and cause you to lose all traction and power. There is a careful balancing act that the game does an effective job of teaching you through the tutorials and level progression. This balancing act is furthered by the presence of different bikes, each with their own focus – all around handling, heavier acceleration, more suspension control, or better air control. Fusion adds a 4-wheel vehicle, which frankly just acts as a heavier, more stable bike. That is not to say that this addition is not welcome, as it does add more variety to player selection. Though, it does mean that level design is more specialized, and you will find that certain bikes just are not able to perform optimally on particular tracks.

The strangest choice in this iteration of the series has to be the trick system. Up to this point, Trials has been a fairly pure focus on rider control and puzzle solving. Sure, there were the odd minigames or challenge maps which flipped the script and put you in control of a skier or UFO, but even those felt pure and focused in their intent. What the trick system tries to implement is a mechanic that serves little purpose, but tries to lull the player into a sense of even greater control. It feels as though Red Lynx looked to a game like Skate – which had a fantastic trick control system based off specific player input via the analog sticks – and tried to hastily implement a knockoff system to little effect. The left stick still controls player lean, but now the right stick can implement a trick. While the player does seem to react to the right stick movement, whether or not the game reacts to said movement as an actual trick is a total crapshoot. The tutorial maps show you that specific bike orientation plus specific stick movement will result in a particular trick. But the margin for error is so extremely minute that you may find yourself thinking you nailed a trick, but end up receiving no points for it. While the physics of player and bike are amplified by this trick system, it is possible to find your character so tied up in a trick gone awry that you hopelessly flail your bike into the ground as you attempt to land. The whole system feels like progress for the sake of progress, and not for the sake of genuine player interaction. 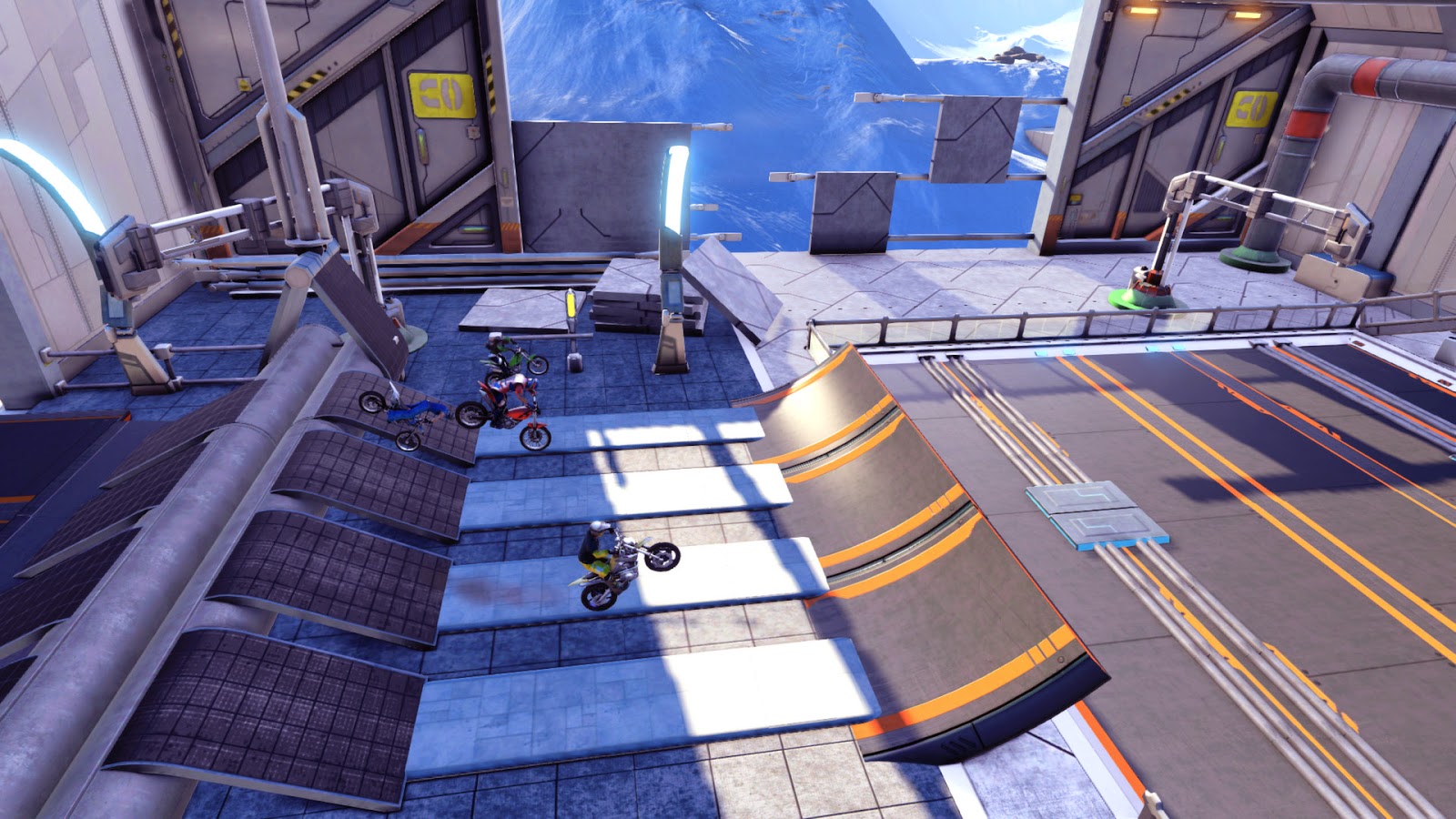 The game offers plenty of hooks to keep a player engaged – from character and bike customization, to level-specific challenges; multiplayer, to a full-on track editor. There has always been something about the Trials series that has made me feel detached from the character. It could be my focus on pulling off the perfect bunny hop over a chasm, or it could be the fact that my rider meets a gruesome end after completing every map. Regardless, I fail to ever really focus on the rider itself. While the customization may be a neat aspect to some players, it was something that never seemed worthwhile personally. The challenges fall into a similar vein. Each map offers 3 challenges for the player to complete. These can be never leaning or letting off the throttle, carrying a bomb from one point to another in a certain time frame, pulling a wheelie through a certain section, or just finding a hidden path or button. While these can add new twists to the earlier, easier levels, the satisfaction I found from even completing later levels made these challenges come across as a sadistic pursuit of impossible goals. Again, this will appeal to many players, but almost felt like an insult to someone barely scraping by in a given level. 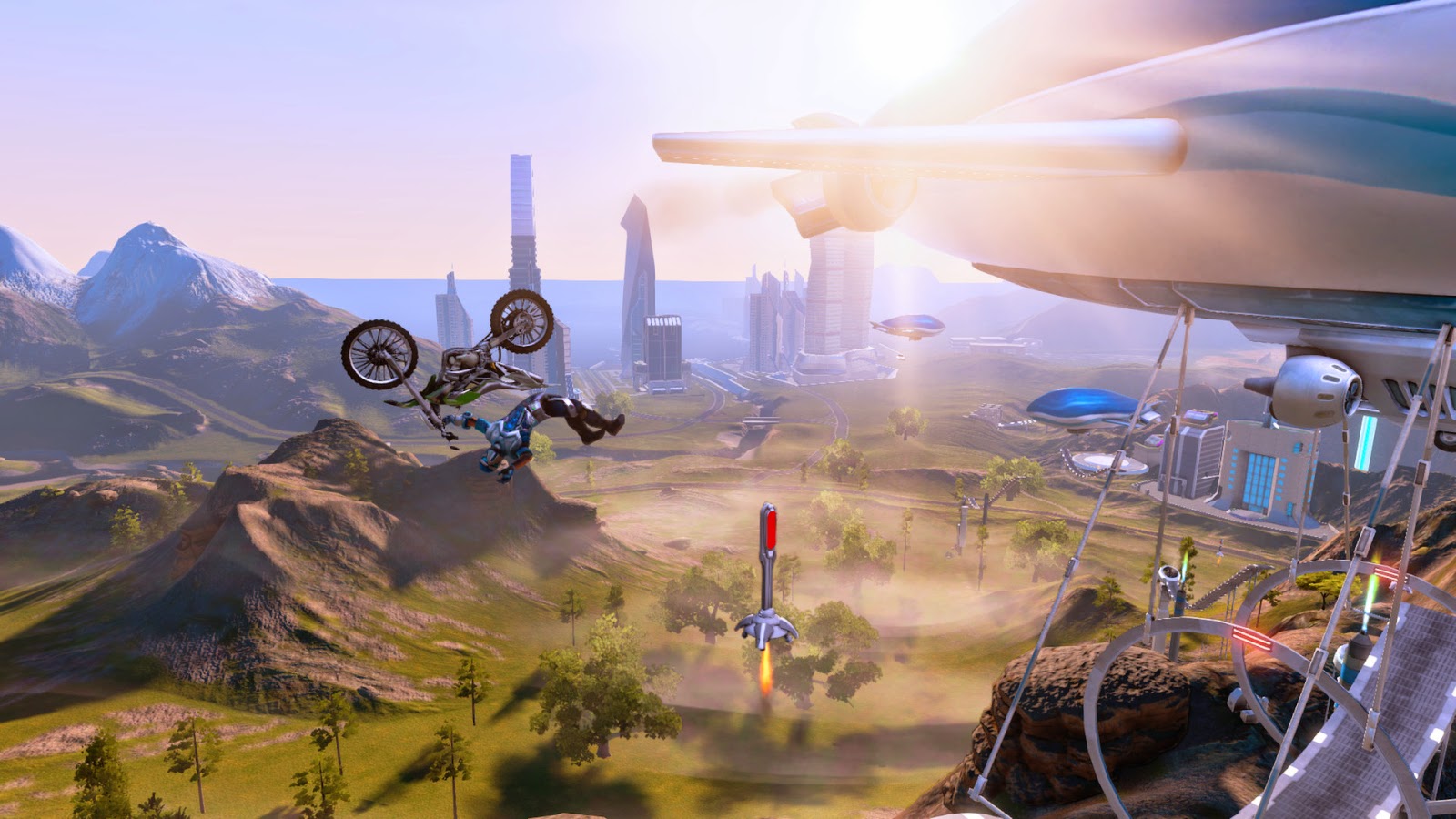 Trials Fusion is a worthy addition to a challenging series of games, but I can not help but get the feeling that Red Lynx is being forced down a road of serialized releases. While the game certainly advances on the idea of bombastic design and whimsical landscapes, there seems to be the problem of adding features just to say they’re there. The trick system was a complete misstep in what makes the series special, and unless there are major refinements in how it performs, it feels like the series could be headed down a dangerous path. There is a lot of creativity in this team, and it is unclear if they themselves are trying to milk every last drop out of this concept, or if a publisher is pushing them to a more frequent iteration and innovation cycle than they are used to. While this game is a far cry from a backwards step, it does put into question my confidence in future titles. We could be on the brink of a “Call of Trials” type cycle.