Racing games have historically been a series of fairly deep simulators that provide numerous facets of maintaining a vehicle on a believable track through sweeping vistas and stormy streets; Trials Fusion bundles up any sense of sincerity and tosses it into the nearest trash receptacle. Speed, insane tricks, and pure hilarity are the primary focus of Trials Fusion. 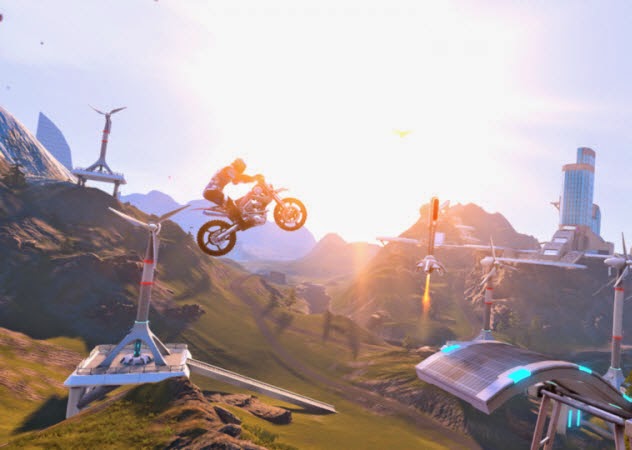 It fits into a genre all on its own; a loving homage to the original
Excitebike with a new found twist on comedic relief, Trials Fusion puts
put in the boots of a relatively unfortunate daredevil on a dirt bike.
Careening through crazy tracks at break-neck speeds and performing
impossible stunts looks to provide you with an adrenaline rush and an
equally satisfying sense of accomplishment when you land a crazy stunt;
the question is, ‘does it?’ 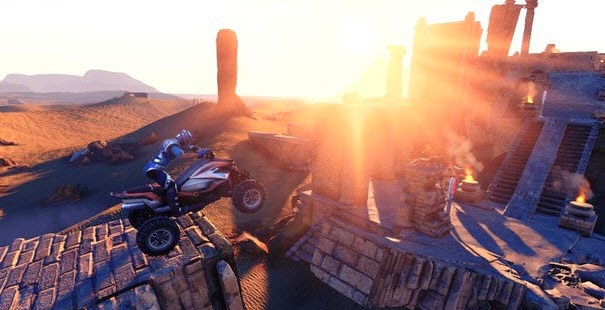 For being a relatively graphically simple game, Trials Fusion is pretty. Very pretty. On the Xbox 360 the textures pop, the lighting sets a hectic or frantic mood, the sweeping vistas in the background, all of it fit together so well you feel like you are a part of the race. The second circuit that is available to you is in a frozen wasteland with pipes exploding, floors moving, and dim, dark corridors and it feels positively chilly as you’re riding through the left. There are numerous events happening at the same time as you zip through the level; you’ll have aircraft fly above you causing you to instinctively duck or a truck or van burning as it passes under a jump that makes you sit up just a bit higher as you stretch to get over the chasm.

The camera rotates slightly as you skyrocket up some of the insane jumps giving you a stunning view of sweeping vistas or rocky caverns; it really brings a sense of space and a feeling of having far more elbow room than the linear tracks really have. While the levels are short, most being done in less than a minute, the open feel of each track would constantly leave me confounded as I think to myself, “it’s done already?” I didn’t see a single pop-in or framerate drop throughout the entire game and was thoroughly pleased when comparing the graphics between the Xbox 360 and the Xbox One version of the game. 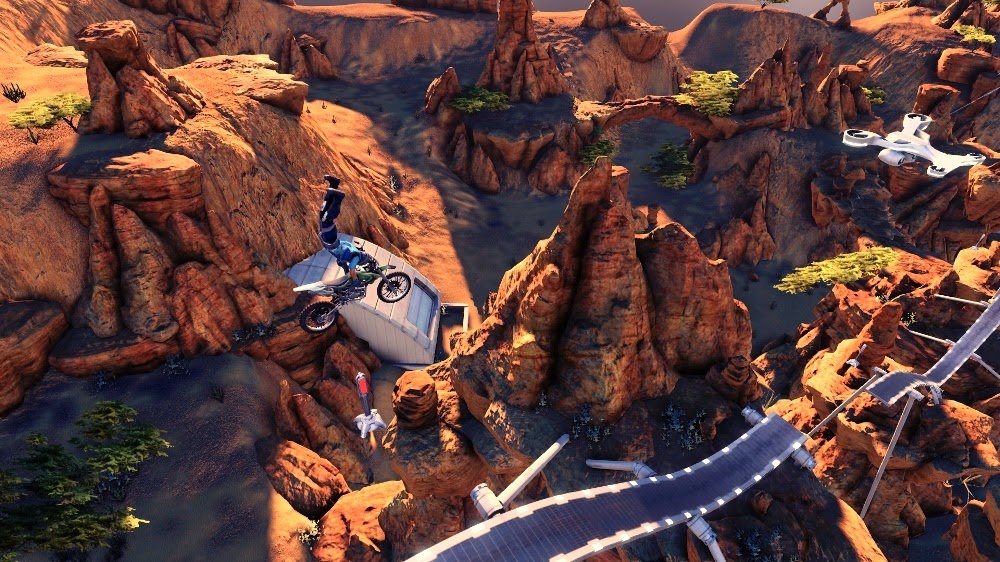 I will break away from the norm here; normally I open the audio review with the music and how it feels, instead I will start with the sound effects and ambient audio for this little gem of a game. The biggest gripe I have with it isn’t really a gripe at all, more a personal preference/annoyance. The primary audio that you hear throughout the entire game is the sound of your little dirt bike or quad; it gets old. Changing the pitch as the bike is heading uphill or down is a nice change but after a few hours the sound really grates on you. Playing other racing simulators or racing games there are a large number of different sound effects that will be heard; screeching tires, honking, environment audio, shifting, the crunch of other racers, just something to break up the monotony of engine noise. Trials Fusion lacks the more overpowering ambient audio which is why I docked the audio a bit. The ambient audio, though, is stellar.

You will encounter explosions, falling buildings, landslides, aircraft or buses and each one is lovingly crafted for to create an authentic sound and it fits really well. Throughout certain parts of the levels you will hear an announcement or some other quip that breaks up the audio at just the right time and you will find yourself chuckling as you think to yourself “Did they really just say that?” As I normally start with music I wanted to take a moment to just think about the ambient effects and the music as a whole and I cannot stress enough how much it is that the music fits for this game. It is fast-paced, decent, and oddly enough, I was periodically hit with a loving wave of nostalgia for this old game called Excitebike. There is something about the music that just brings back memories of another dirt bike racer of years long past and it struck a cord with me. That said, the music is superb and fits so well you will find yourself turning up the music volume and down the sound effects volume (I know I did) just to feel the rush with the peppy music and high-flying action of a little ragdoll on a dirt bike. 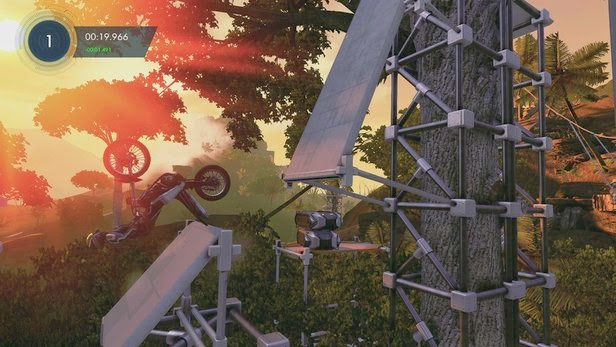 Trials Fusion is fun. Plain and simple. You have a bike, an out-of-this-world track, and a phenomenal music selection to wile away the hours and it is so engrossing you won’t realize four hours has passed in these one-minute intervals. With the first few circuits dedicated to the basics, and you will need them, you are eased in slowly but surely into the crazy world that is Trials Fusion. The levels you ride through are falling apart, full of crazy jumps, and the designers must have shopped at a Pitfalls-R-Us during a crazy summer sale because they are all over the level and they are amazing. The fast pace of each level and the feel of landing crazy tricks while flying through the air with jets and explosions is simply euphoric when you land one (and when you biff it, the resulting crunch is hilarious). There are admittedly, some extremely frustrating points but the track is designed that these are separated by just enough fun that you won’t be throwing your controller in frustration.

I was pleasantly surprised with the amount of stuff you can do in Trials Fusion. Successfully landing tricks and riding without crashing will net you cash that you can spend on upgrades for your bikes / quads which in turn allows you to head back to some of the earlier levels to grab the coveted Gold Medals. Each of the circuits are unlocked via your medal count and the higher your score and more tricks you do on a track will bring you closer to grabbing more medals. In addition to the upgrades you can also alter the color of your bikes / quads to add a bit of flair. Amidst the different online modes, like regularly released custom tracks and multiplayer, there are also ghost riders (friends or other racers) that will allow you to compete against other best times out there. All in all there are dozens of different extras that will keep you interested in, and invested in Trials Fusion, bringing you back for more wheelie-popping mayhem. Multiplayer gameplay is fruitful and fun, generally ending in one or another screaming out as your opponent pulls off a relatively hilarious stunt in some backhanded way; needless to say, it is enjoyable. Very enjoyable. 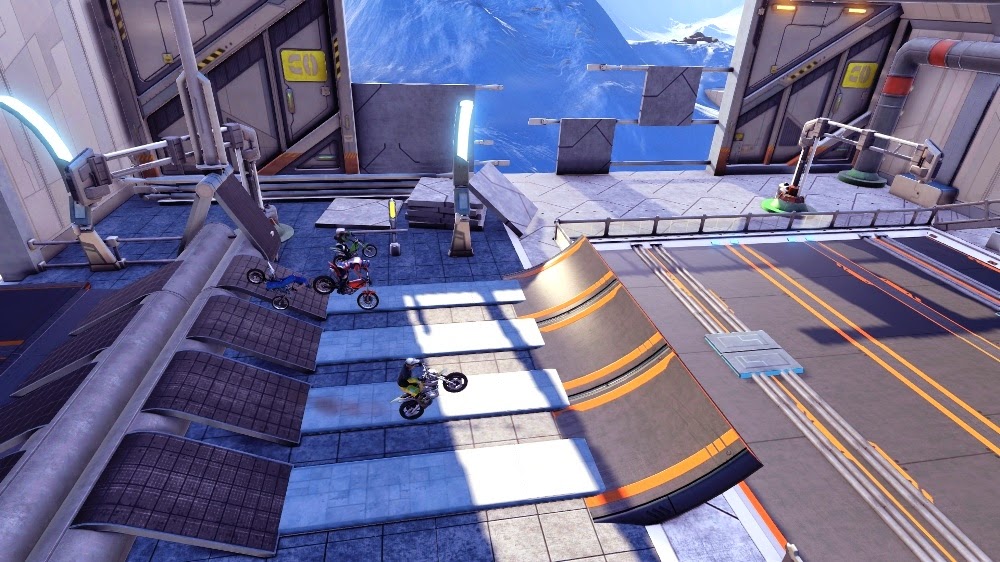 There are so many different ways to describe Trials Fusion and none of them really give it any justice; fun, hilarious, hectic, frustrating, addicting. Not a single one fits the bill when trying to label Trials Fusion. The hours I have poured into the game do not feel lost, as it is just the right amount of challenge mixed with comic relief and an expansive reward system that after a long and grueling day at work it is a wonderful feeling to just sit down and play a game that does not take itself seriously while still providing some immersion. It feels more like a release after running through a few different tracks, trying to best your previous times or to beat a friend’s ghost. The light-hearted and extremely carefree feeling that Trials Fusion will give you is something rarely found these days in video games; most try to be overly serious  or try to over-do the comic relief resulting in bad jokes and a lame send-off. This isn’t the case here, as the perfect blend of action, comic relief, skill, and difficulty round out the game in such a pleasing manner that many hours will be spent within the game without feeling that a single one was lost. A highly enjoyable title that deserves a place on every gamer’s console, Trials Fusion is one of the few must have games released in 2014. 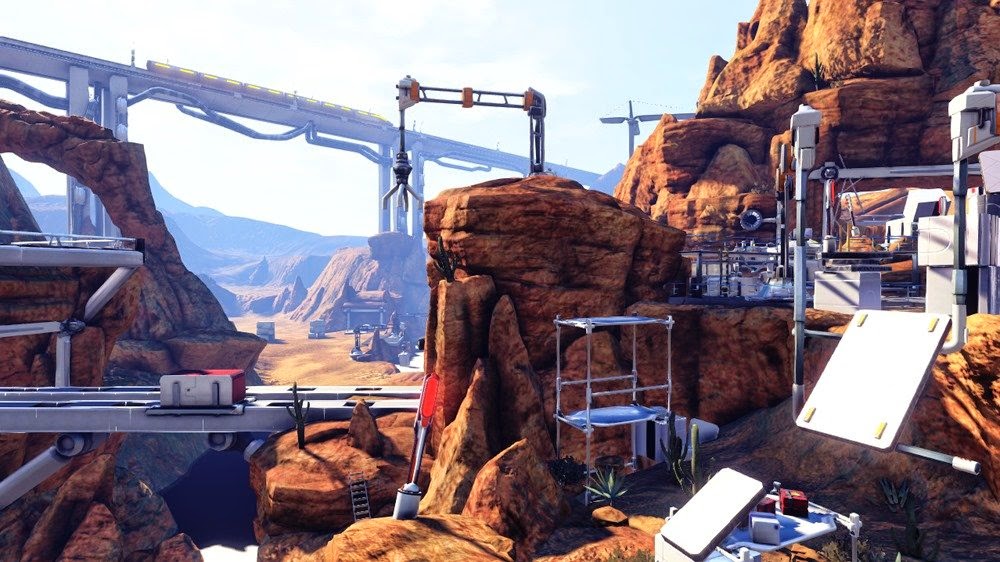