Real Time Strategy games have always been a great little power trip, even for those as strategically inept as I. Commanding armies of fantastical orcs and humans, lead by their mighty hero units in Warcraft. Constructing technologically advanced robots and amassing an army on a massive scale in Total Annihilation and Supreme Commander. Leading your men against untold galactic horrors in Warhammer 40,000. Or pushing your fledgling group of gatherers to thrive and prosper through history in Age of Empires. Ensemble Studios’ Age of Mythology picks up the core mechanics of the Age of Empires series, and throws in a healthy dose of mythical intrigue to create a unique and enjoyable experience. Now, nearly 12 years later, the updated Age of Empires: Extended Edition has been released. But is it worth playing for those that have fond memories of the original, or those that are more used to modern RTS games? 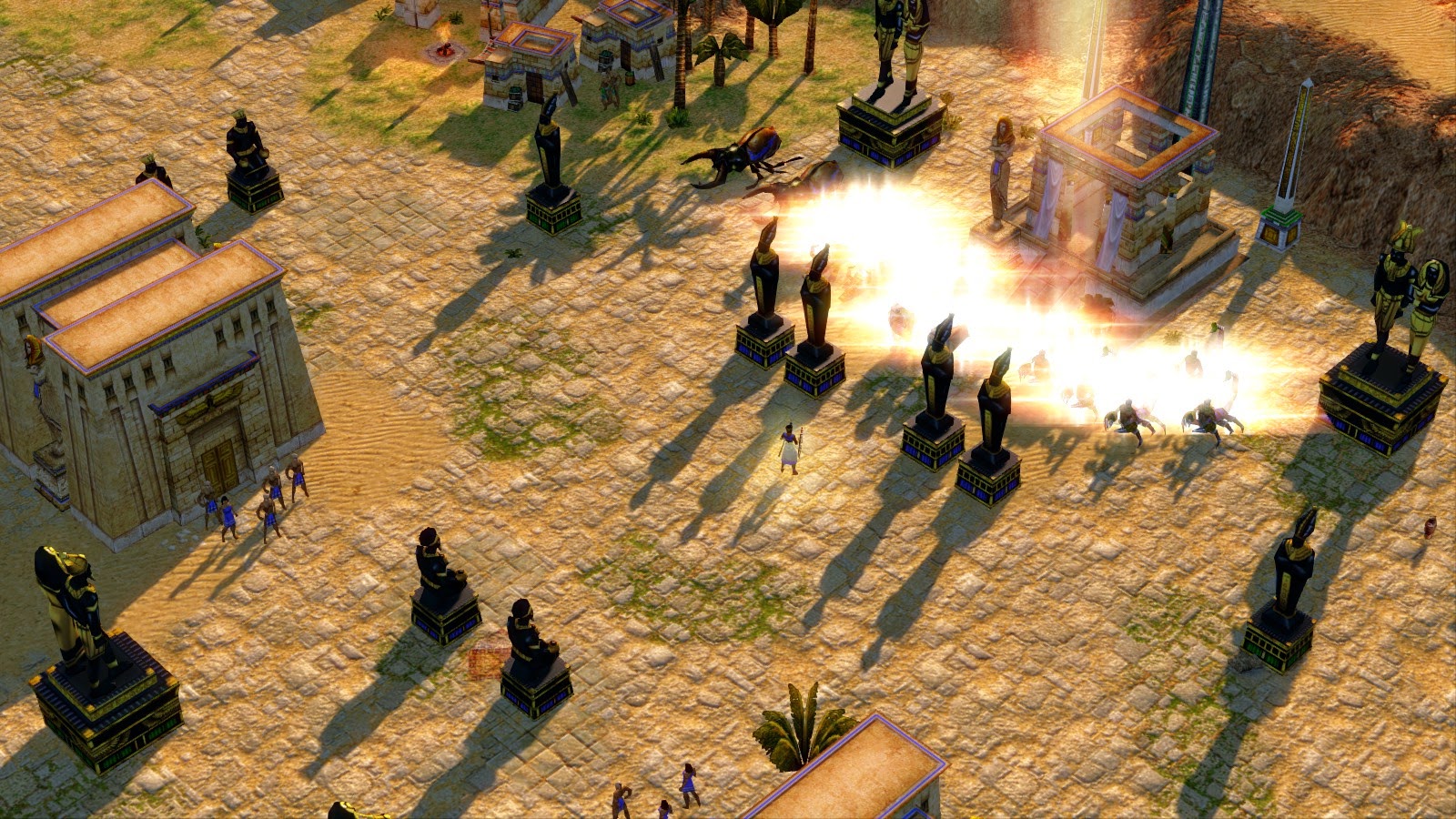 The root mechanics of Age of Mythology are fairly standard fare, and really serve as a foundation for the surprisingly deep and diverse mythological lore that shines through in the late game. Starting as a lowly group of gatherers, Wood, Gold, Food, and Favor are your resources. The pacing is very deliberate, almost plodding in the early ages, as you get your economy up and running. There were definite lulls where I simply had nothing to do for a short period, as my economy could not support any expansion or immediate gain. As you construct certain buildings, such as a Temple or a Market, you can advance your civilization to a new era. With each era comes new buildings and units, but most importantly the choice between one of two gods that you wish to follow. Each god has their own unique units, powers, upgrades, and advantages, and your selection can really help strengthen your playstyle. Which gods you will have access to will depend on your initial cultural allegiance – Greek, Norse, Egyptian, or Atlantean.

Each of the 4 cultures has a subset of 3 major gods you can opt to follow from the start of the game, and then 3 sets of 2 minor gods that you select between as the game progresses. What is astounding, is that each god has their own unique qualities that you must factor in to your gameplay. Mighty Zeus can zap a unit with his lightning bolt, killing it. Gaia can plant a small forest of trees for your gatherers. Ares can reign down pestilence on enemy buildings, halting their production, and he lets you train the mighty Cyclops. Hel can train Frost Giants, or even summon the dragon Nidhogg to the battlefield. Heimdall can crumble walls, while Forseti brings about a healing spring. Each god also has it’s own set of upgrades, perhaps altering one specific unit to be more powerful, or unlocking specialized spears, shields, or bows to be researched at your armory. There are also Hero units unlocked with each god, allowing you to bring forth Ajax, Kastor, Agamemnon, Horus – and dozens more. These heroes are specialized to fight off the mythological units of your enemies, but still hold their own against the average unit. 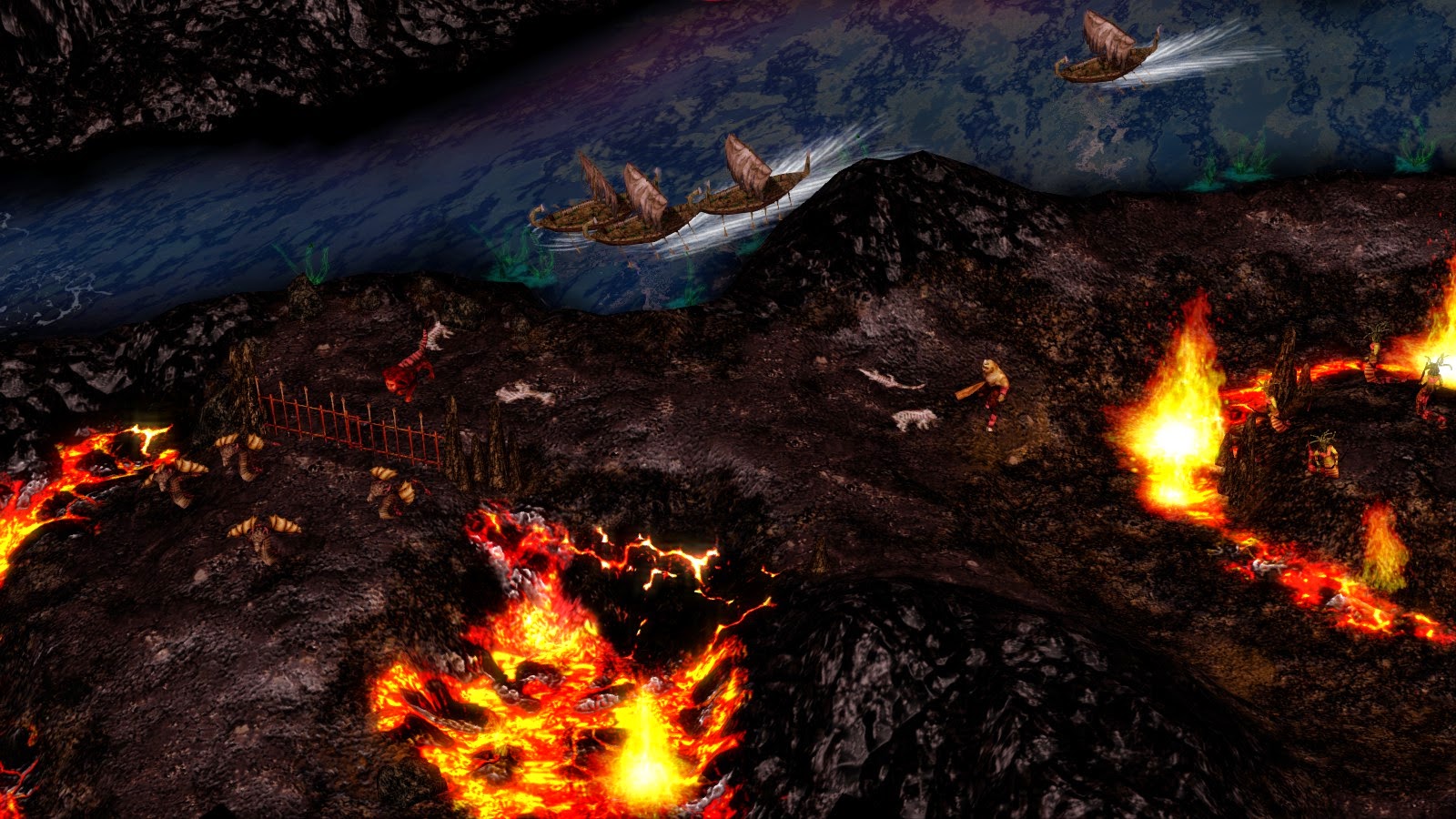 The vast amount of unique units and abilities turns combat into a highly specialized game of rock, paper, scissors. Archers are good against soldiers, but weak to cavalry. Spearman can take out the cavalry, but aren’t much good against those pesky archers or soldiers. Specialized cavalry can be trained to hunt down other cavalry, but they are then even more useless against spearman. Throw in the mythical units with similar sets of advantages and disadvantages to regular units, and the Hero counterpart which is specialized to take out those mythical units, add a dash of siege weaponry, and voila. A system that demands you specialize and prepare for specific threats. Or, if you play like I do, demands that you turtle for 20 minutes as you build an army with a smattering of all unit types, and send them out in a glorious patchwork of mythical destruction.

While little has changed on the mechanics side of the equation, the game does purport to have a much needed facelift. Now, I wouldn’t go so far as to say that the game looks great by any stretch, but just enough was done to make it look like I remember it. That is, it is more of a spitshine than a true overhaul. Lighting and water (the only two things specifically called out in marketing material) are the only noticeably updated effects. The engine still shows its age, especially if you find the time to zoom in and see units up close. Unfortunately, you don’t have much of a choice but to get up close and personal thanks to the campaigns cutscenes. These don’t seem to have been touched at all, and feel as if they were just “good enough” even back in 2002. Poorly acted plot points are played out by the woefully polygonal protagonists, and I quickly found myself skipping these short scenes. Audio also seems unchanged, with a tonally suitable string-laden soundtrack, but it too is a bit ragged compared to modern compositions and production values.

Despite how little has changed in this update, I still enjoyed the chance to take a trip down memory lane. To hearken back to a day before Starcraft and Total War completely dominated the market. Where developers took the same set of core mechanics, and layered in their unique twists and lore. Age of Mythology is one of my favorite examples of a twist done right, if only for the sheer joy of seeing huge armies of mythical beasts clash together. The Extended Edition is still an old game by every right, and does little to make for a brand new experience – but that’s alright. It is still an enjoyable experience that shows some threads to modern experiences, while still holding on to old school mechanics. For those that already own a copy of Age of Empires, it would be a hard sell to move to this version. But for those which did not have a chance to play 12 years ago, I would recommend picking it up – though perhaps on a sale, as the current price point seems a touch to high for what the package offers.