From the very first moment I heard Chronology, I was in love with the music. It was late at night, I had just finished installing the game, was unaware my volume was up quite so high… My wife glances over at my computer and I expect a request to turn it down for sure, except I am instead met with a “That’s really pretty. What is that?”. 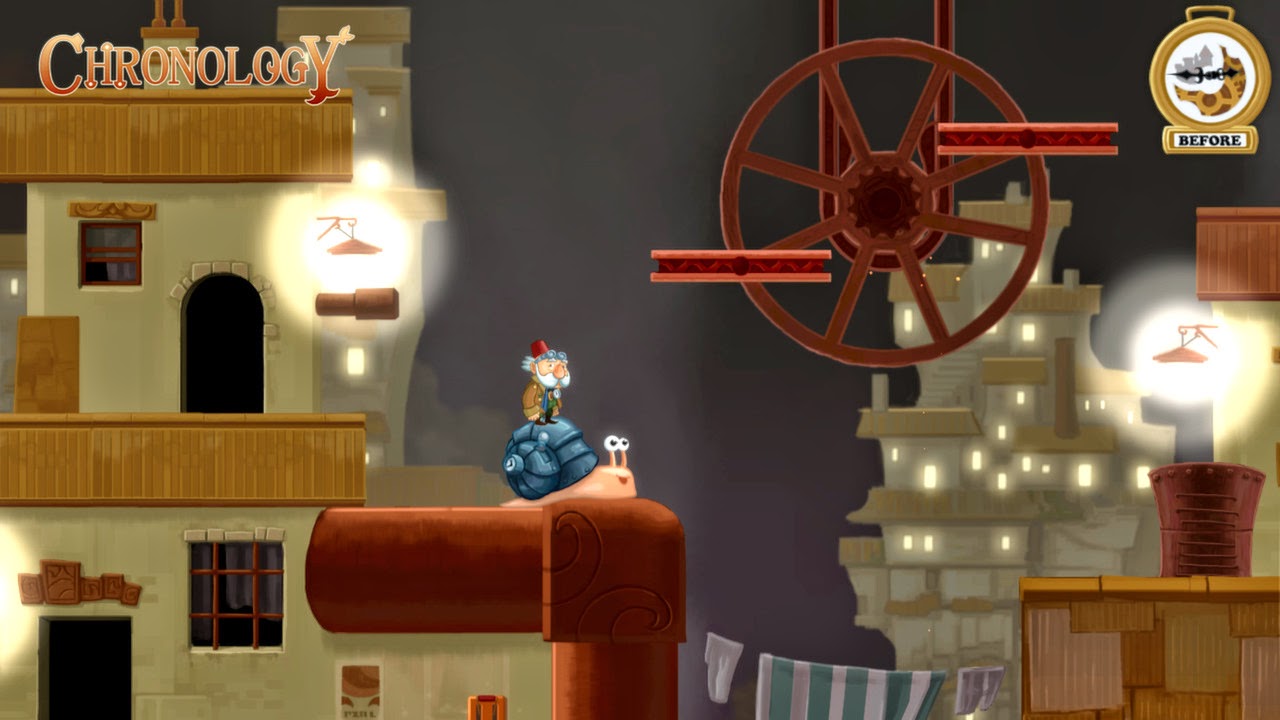 That pretty much says it all right there. The music is uplifting, whimsical, beautiful and not too busy. From beginning to end, the music made the entirety of the game a wonderfully positive experience. The sound effects were nothing revolutionary, far from mind-boggling or complex, but this game simply does not need those things. A humble platform puzzler that revels in what it is and does not even begin to try to be anything more than that. All in all, a very pleasing aural experience that I wish would continue forever. But I get ahead of myself.

Chronology is a tale of a world renowned inventor observing the world after a great tragedy befell the world. He and his mentor had been harnessing and merging machinery with alchemy, science with chaos, to create the “verve”. Try not to get too hung up on the differentiation between ‘science’ and ‘alchemy’, or the true nature of this verve, though, because they simply are not explored by this title. There is no question of good vs evil, science vs nature, saving the world or polluting the timeline through repeated zips back and forth through time. Shortly into the beginning of the game, you happen upon an ‘old’ invention, a pocket watch that will take you back to a time before the great catastrophe, letting you not only view the world as it was, but also interact with it. Moving a plant to a more habitable location in the past will make it so that it has grown and thrived in the future, and it is this key mechanic that is most prevalent through the game. The puzzles and solutions are, for the most part, obvious, and more a question of execution than they are of deduction, leaning more on the platformer paradigm with a problem solving flavoring to it. 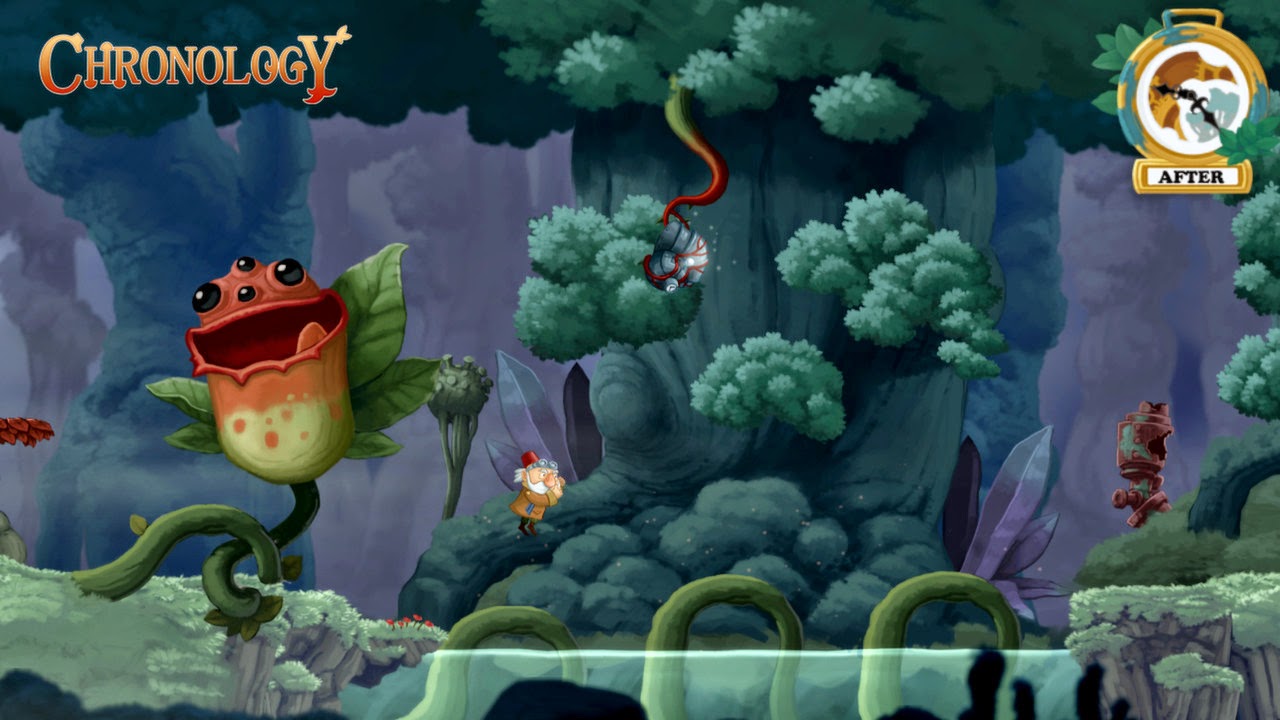 The controls are far more enjoyable on a gamepad than they could ever hope to be using clunky keyboards, and while I often found myself using the pocket watch instead of calling my ally to me, causing me to have to restart the puzzle from scratch. In some platform puzzle games, this might be a burden, but when every problem can be solved in 30 seconds or less, it just lacks the same sting of failure.

The story, as alluded earlier, is a bit flat and is everything it seems at face value. The closer you get to the end of the game, the more questions the monologue that the protagonist asks in the cutscenes, lending to a very steady rising action to the story and setting the player up with a lingering sense of something darker waiting ahead… Some twist involving time manipulation, your curious time manipulating partner, your mentor, the protagonist’s past, something. Don’t get too attached to this feeling, because it is completely unfounded. 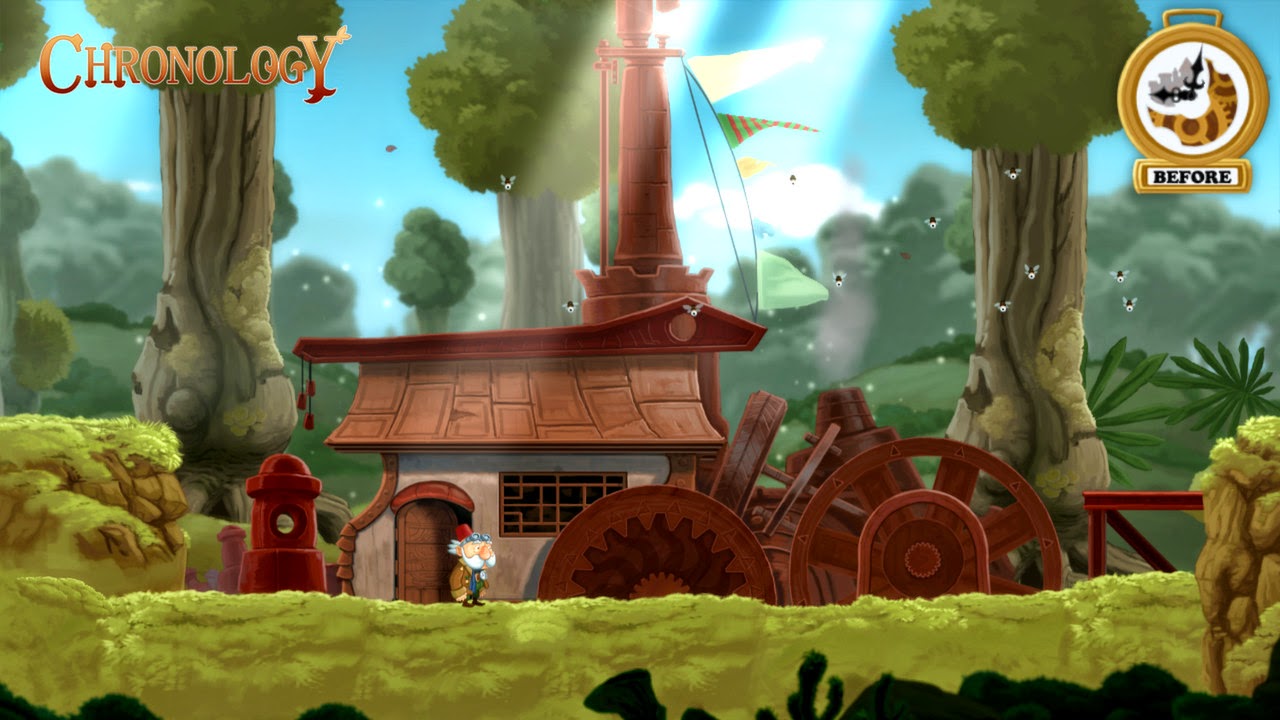 Between the plot and the length of the game, I found myself craving more. While this might normally sound like a complaint, in this case it is actually more telling of a solid game title that was so well done, you just find yourself wondering why it does not already have 3 years of finished DLC that warp back to the present using the inventor’s watch.

In the end, for the price tag on this software, it is more than worth the expense. It could have been longer, but when I count the half hour I spent just sitting there listening to the music, the fact that puzzles that stumped my wife were instantly obvious to me and finally that even with no plot twist I found myself smiling at the closing scene, this is definitely on my list of recommended games. The test of a true gem is whether you should beat it or complete it, but with this game, the two are the same thing, so just go buy it already.