Monsters: Ultimate HD, by Pixel Junk, is a Vita port of the tower defense game that originally took the world by storm on the PSP. A PS3 port was made in 2008, and hot on it’s heels was a DLC pack that added another island, almost doubling the number of stages. If you are looking for a tower defense game that is going to gently ease you into the nuances of the game, slowly introducing a new tower and a new enemy with each stage of the campaign… then keep on looking, because this is not the game for you. Monsters is an unforgiving game that is not going to hold your hand in the least. There is a tutorial, to be sure. It teaches you how to raise towers and destroy towers, how to upgrade them and even how to purchase new towers each level. That is it. After the tutorial, I did ‘Medium 1’ on normal difficulty and promptly scuttled back to ‘Easy 1’ to grow somewhat more accustomed to the game. Even some of the levels on the easy track needed a couple goes at it. 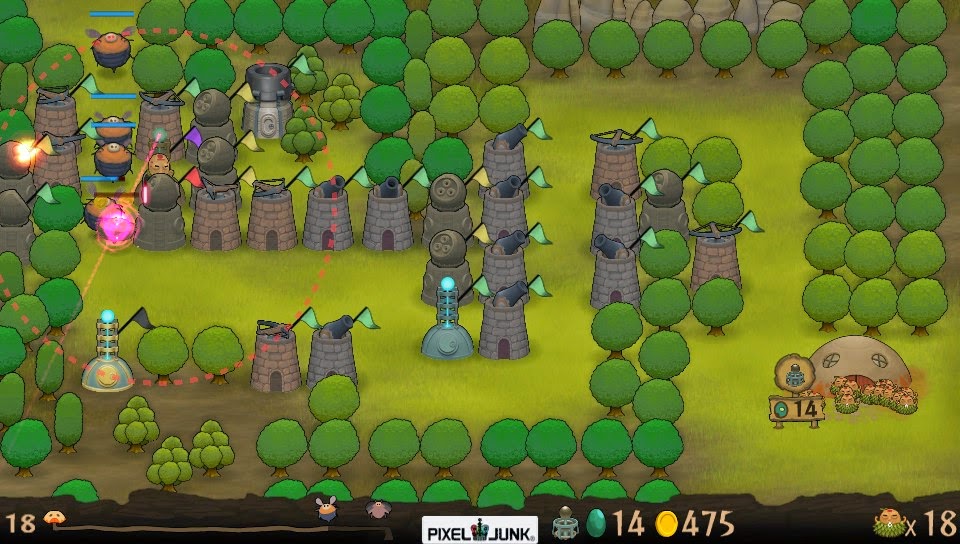 Now I know what you are probably thinking, but this is not my first tower defense game. Far from it. Monsters is punishing and unforgiving, and often feels like the towers are underpowered. I poked at a guide that showed precisely which towers to use and even THOSE perfect runs had a couple of close calls where a spider was a tenth of a second from Tikiman’s base. 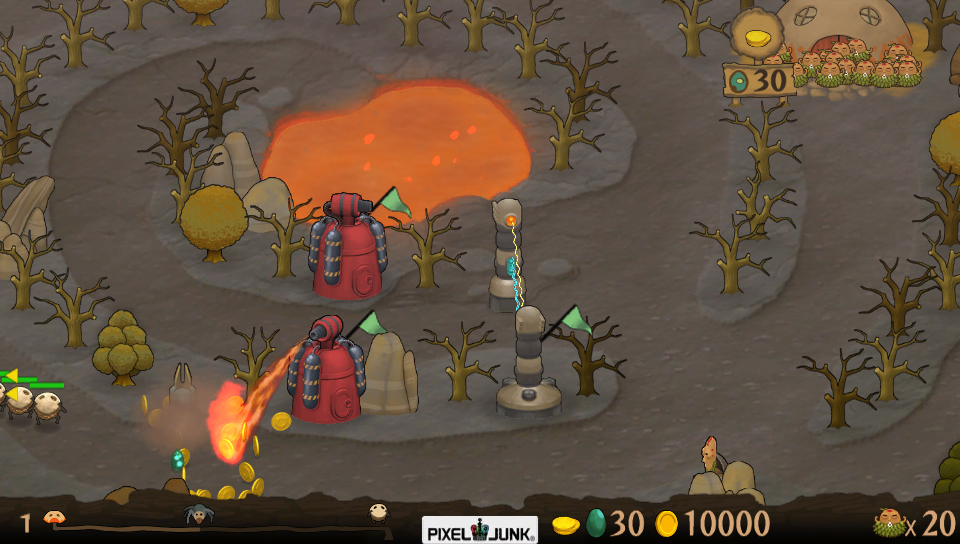 Monsters: Ultimate HD is a game that, based on the name, you would expect some pretty stunning graphics from. Tikiman looks flat and two-dimensional with an unmoving ellipse for a shadow.  The enemies all face towards the screen and walk in place while slowly sliding along the grass from their gate to your base. Compared to other HD remakes that have hit the Vita, like Final Fantasy X/X-2 for example, Monsters flat out does not deserve the HD flag. All in all, the graphical representation falls short and there are a couple of UI elements that are not explained anywhere in the game that I have seen. Some levels have a series of white circles around them on the map, forming a ring around the level, which indicates that there are special conditions in effect for the level. These can range from not gaining any additional resources through the course of the level to facing one continual wave of all of the monsters, instead of gradual and separated waves. 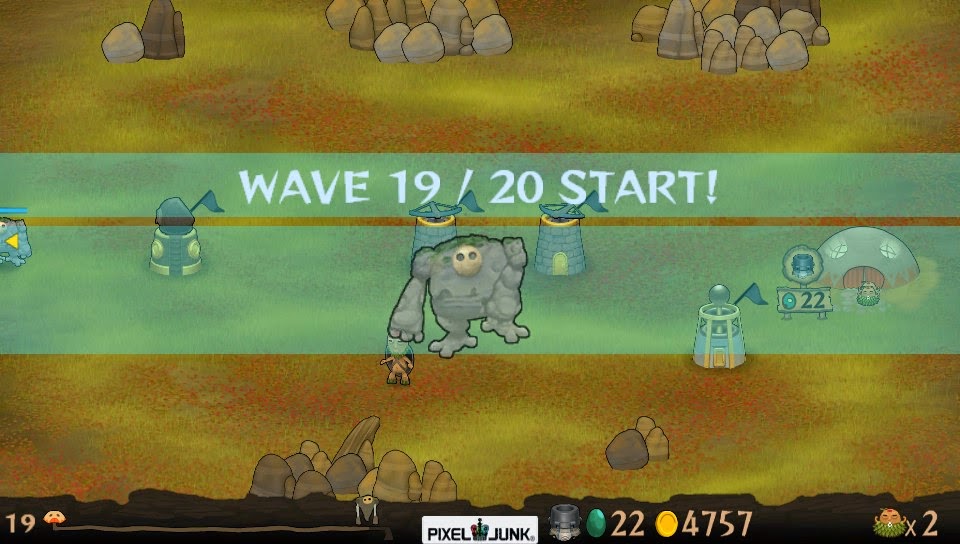 This is a cartoony tower defense game. The sound is chirpy, cheerful and critter-like. When you blast stacks of ants with a cannon, you can hear them all squeal their cries of anguish in tandem. The music, on the other hand, is forgettable. When I sat down to write this review, I had to think long and hard about whether I’d turned the BGM off entirely all this time. A quick double-check shows that the music’s never been so much as turned down. It just does not stand out in the least.  Monsters wins some points back for their tower sound effects. Unlike the enemies, the tower sounds sound fitting and improve immersion, such as it is. 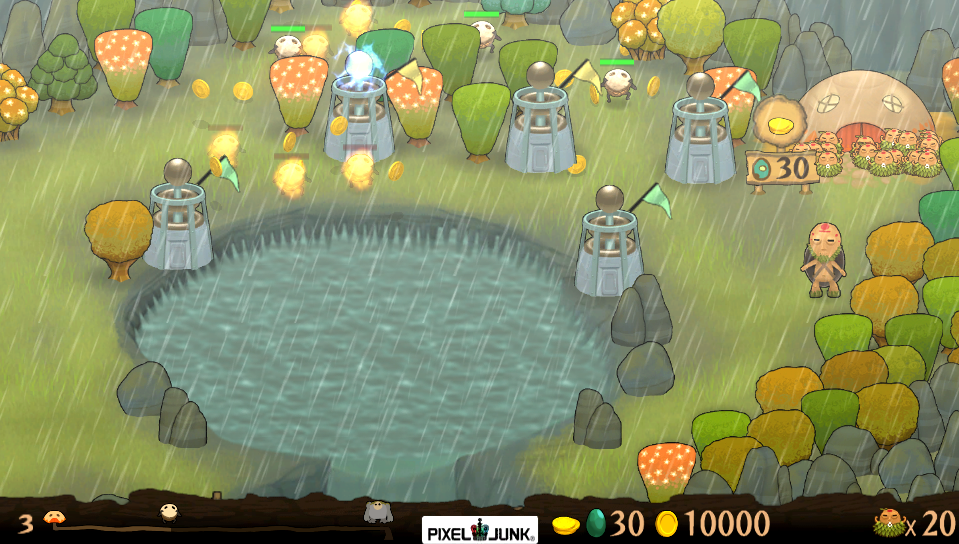 Despite my seemingly incessant gripes about the game, this game is punishing in a rewarding way.  Like a roguelike (but not quite that extreme) or a Demon Souls-esque title, you will suffer and suffer, but when you eventually do get a rainbow (perfect score) it will feel like a massive achievement. This game forces you to make a hard decision with your resources. You get gold from killing things and that can be use to turn a tree into a tower.  Each tower has its own cost. From there, towers gain experience as they kill things. They can also gain experience when you move Tikiman to stand on them, causing them to upgrade even when not in use. If you are in a rush and have extra gems to burn, depending on the upgrade, 1-3 gems will net you an instant upgrade to the next tower level. With the sole exception of the final upgrade, most upgrades feel very lackluster and, in keeping with my original assessment of the towers, keeps them feeling weak and underpowered. Once they are level 5, they do feel capable of holding their own, but if you force-upgrade too many towers, you won’t be able to unlock any of the snazzy towers for that level. 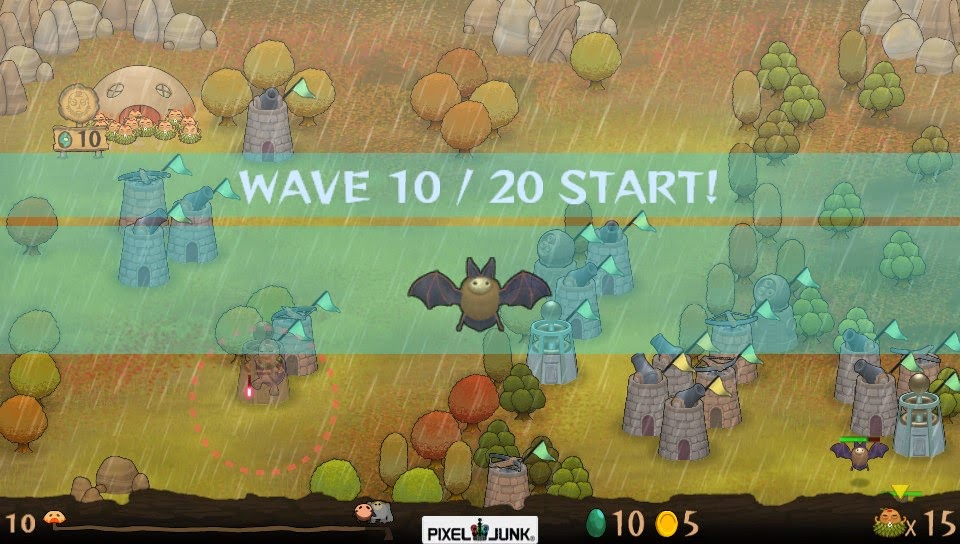 What would a tower defense game be without extra tower types? At the end of each path on the islands, there is a special map. Completing each of these special maps will unlock an upgrade, be that a new tower that can be used on any level or an upgrade to Tikiman’s movement speed. Unlocked towers still need to be purchased with precious gems each level, though, so don’t think that unlocking the almighty flame tower is going to negate the need for a couple dozen cannons every level. These special states are unlocked by reaching steadily increasing quantities of rainbows. The game rewards perfection with more options, making future success that much easier to attain. All you need to do is cherry pick your victories where you can to break into the unlocks and you are set. 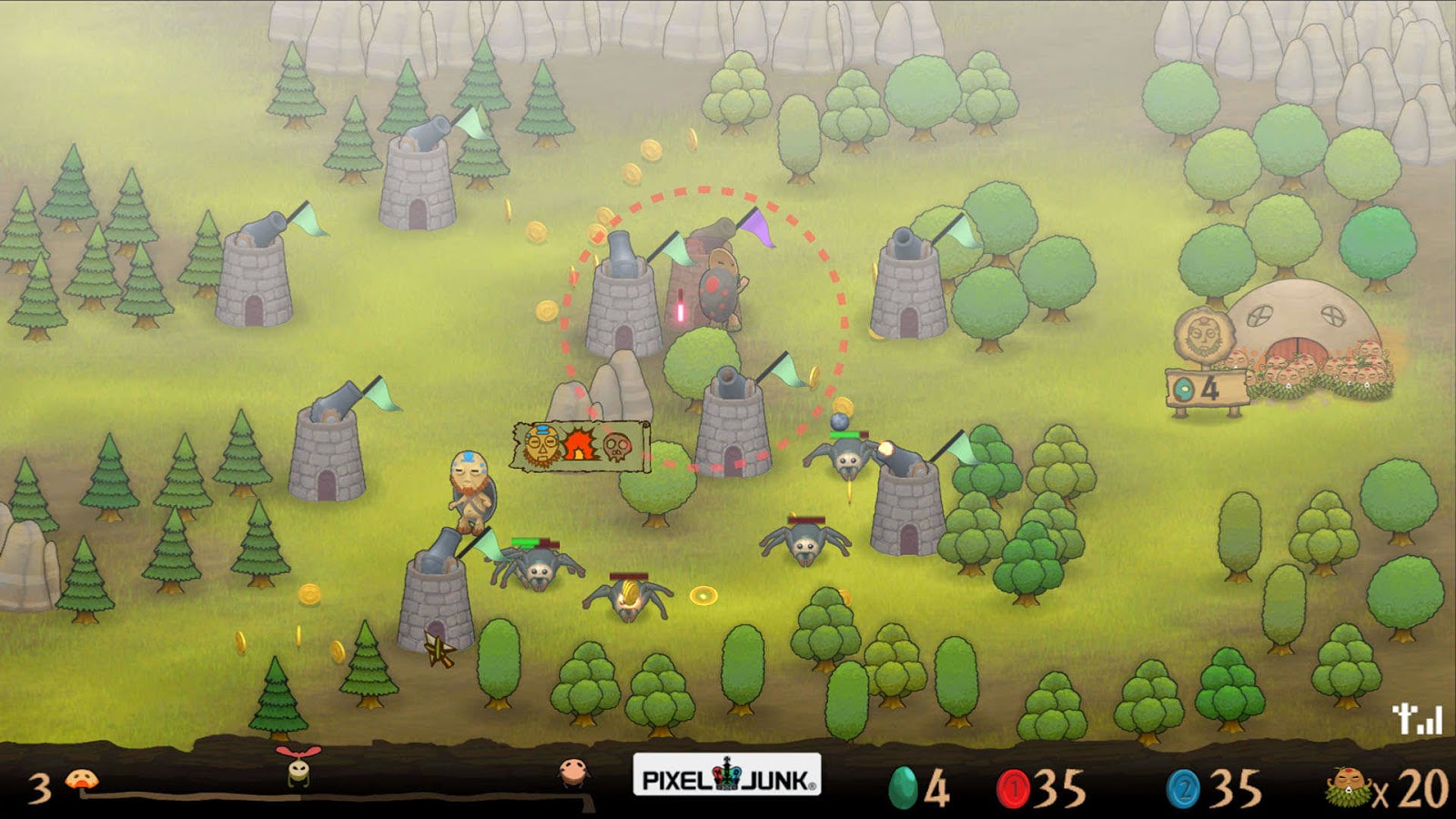 I do not play tower defense games for the graphics or for the sound and music, or for any semblance of a storyline, which this game most assuredly does not even pretend to offer up.  It all boils down to gameplay and challenge… two things that this game does rather solidly. I say rather solidly because while the DLC being baked in does make it worthy of the ‘Ultimate’ monicker, no matter how high resolution you get those sprites, it still looks flat. They added some touchscreen controls that work great, and there are even medal challenges that are unlocked upon reaching various arbitrary milestones within the game, but bottom line, when I am craving some tower defense, I am still going to load up Gemcraft.

Give it a play and see for yourself. I promise the TD aspects will not disappoint.  Some herald it as a masterpiece of the genre, and on prime numbered days of the month, I will even agree with those kooks. Moving this to the Vita does a lot for adding portability, and it brings a solid title to the Vita that has been fairly disappointing, at least from my experiences so far… excepting the final fantasy ports. 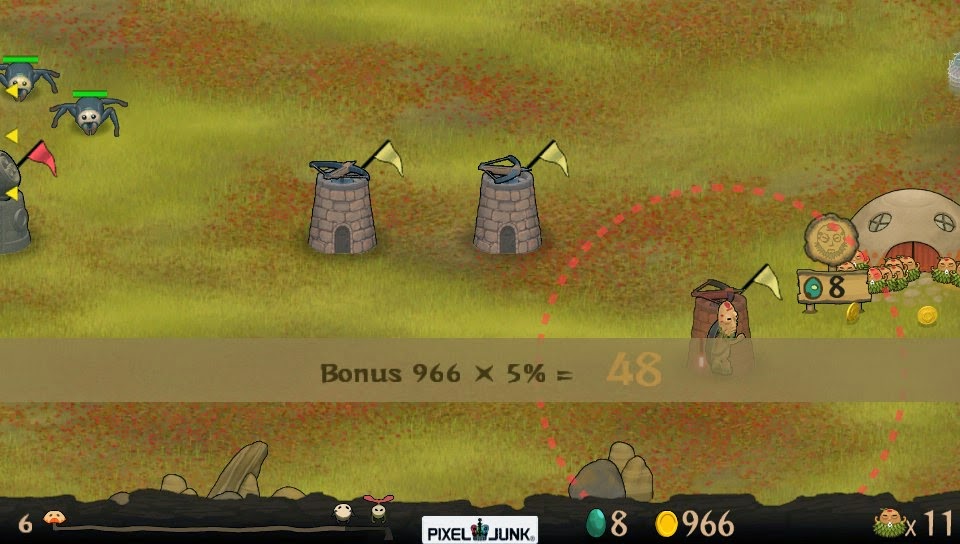