Once more, the Bydo threaten the earth and it is your task, nay, duty, to pilot the R-9a/c to beat back the assault and then take the fight to the enemy, only stopping once peace has been seized, by force if need be. For those of you that have no clue what I refer to, R-Type Dimensions is a remake of R-Type 1 and 2, just as you remember them from the arcade or, in my case, from the Game Boy. 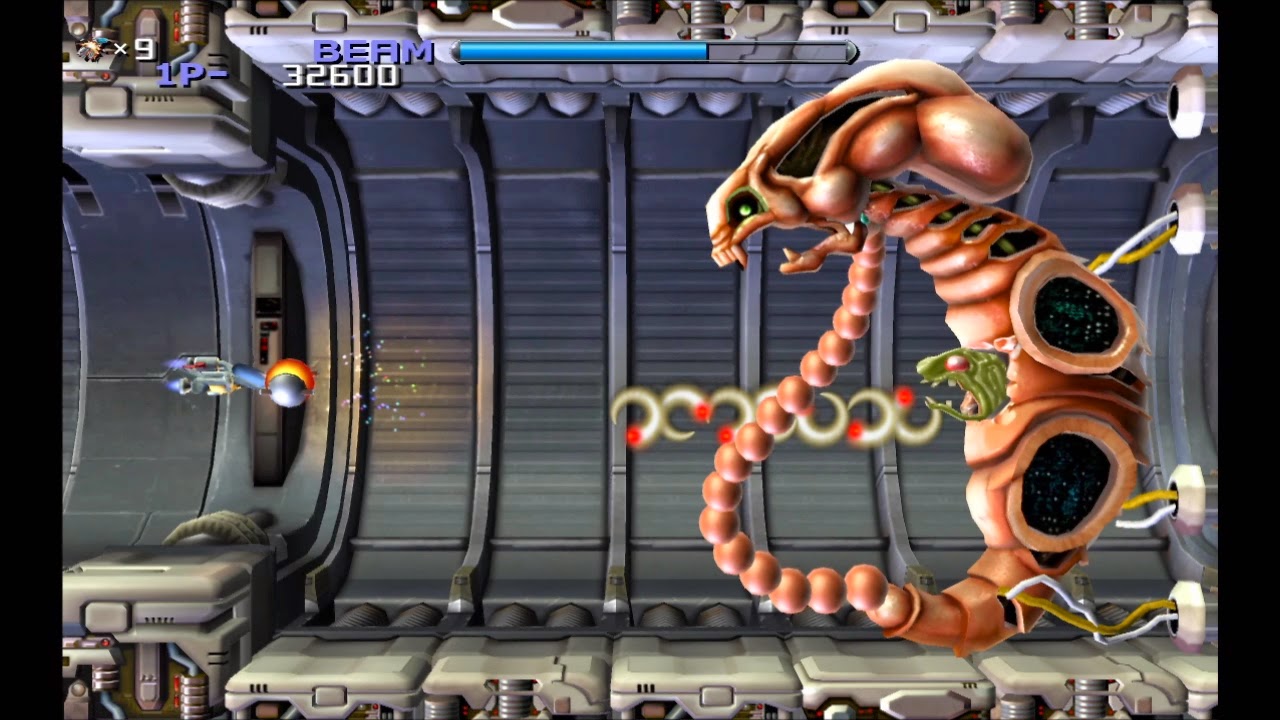 No mere port or compilation of these titles, this title features updated graphics and sound, an infinite lives mode for those among us that simply lack the time to dedicate to saving the world, local cooperative play to use to make your wife loathe you for making her play such a game, and even a new ‘crazy’ camera setting. Still not sold? Read on! 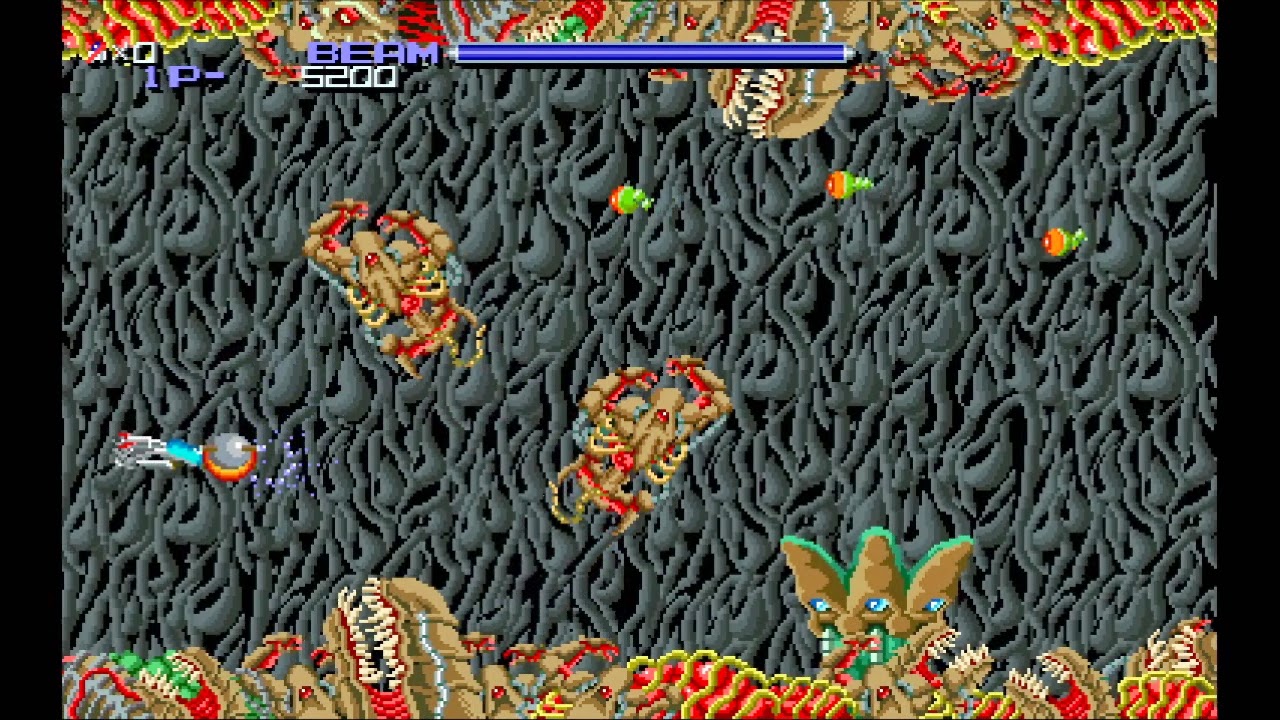 R-Type Dimensions has two different graphical modes, with both a ‘classic’ setting and a more modern setting. The classic setting looks and sounds just like my childhood remembers it, with the stunning retro appearance that made me fall in love with the classic R-Type games. The updated graphics touted by the other setting, on the other hand, are shiny, smooth, and while not as fleshed out as they could be, to be honest, when you play an R-Type, you flat out have zero time to stand around and admire the graphics of your vessel.

The ‘Crazy Camera’ setting is something that I instantly learned to hate. Imagine, if you will, trying to play R-Type on a 3D television, and then turn that display to face someone else on the opposite side of the sofa. It is a 3d-esque view mode that makes everything appear in glorious isometric 3d, but it also makes it very difficult to judge the distance between you and that wall that is swiftly approaching. If there are two things you want to be absolutely certain of at all times in an R-Type title,  you need to know how close bullets can get to you and how close walls can get to you before you die. If you happen to be good enough that the added handicap is not going to make a difference for you, you need to let me watch you beat this game. 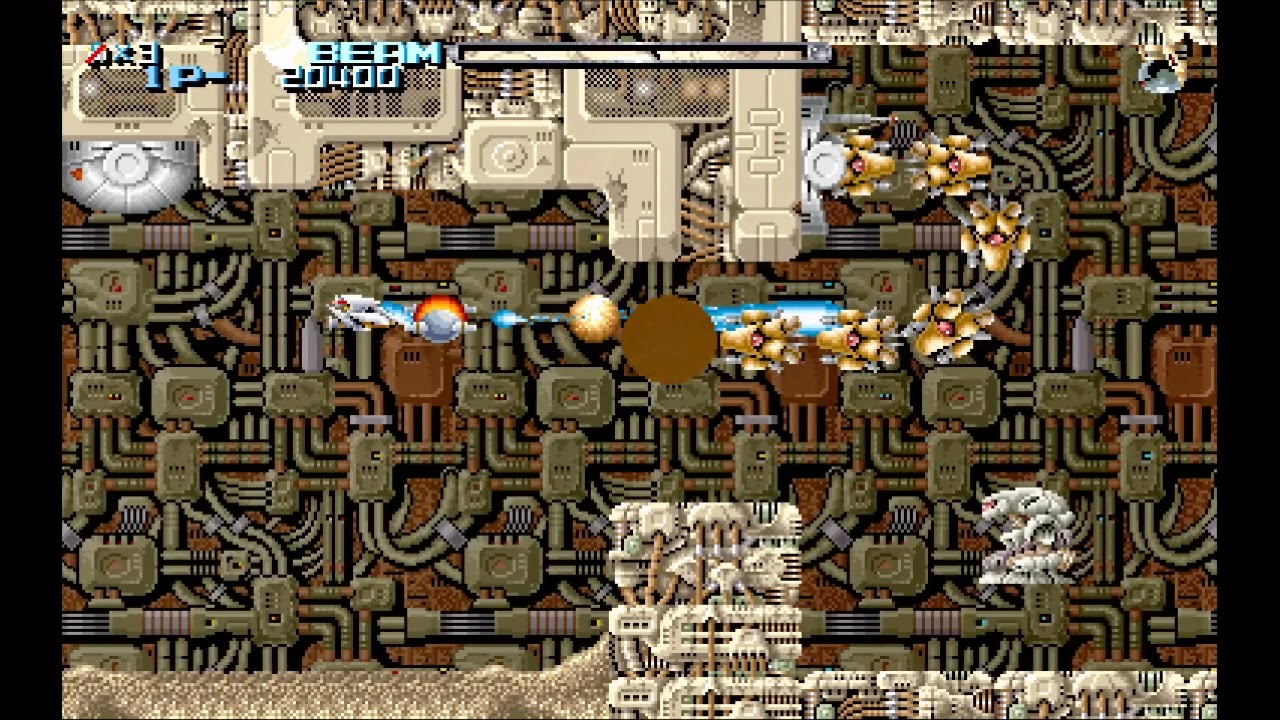 The aural experience of R-Type is one that is love-hate at best. Your inner child is going to absolutely love both the classic and redone tunes, complete with soaring bits of whimsy that make you truly believe that you are on a quest to save the world. After firing your 10,000th shot with the exact same sound effect however, that noise is going to start to grate on your eardrum. No matter how catchy that ohrwurm is, it just fails to be compelling enough to keep me from turning some of my own music on. 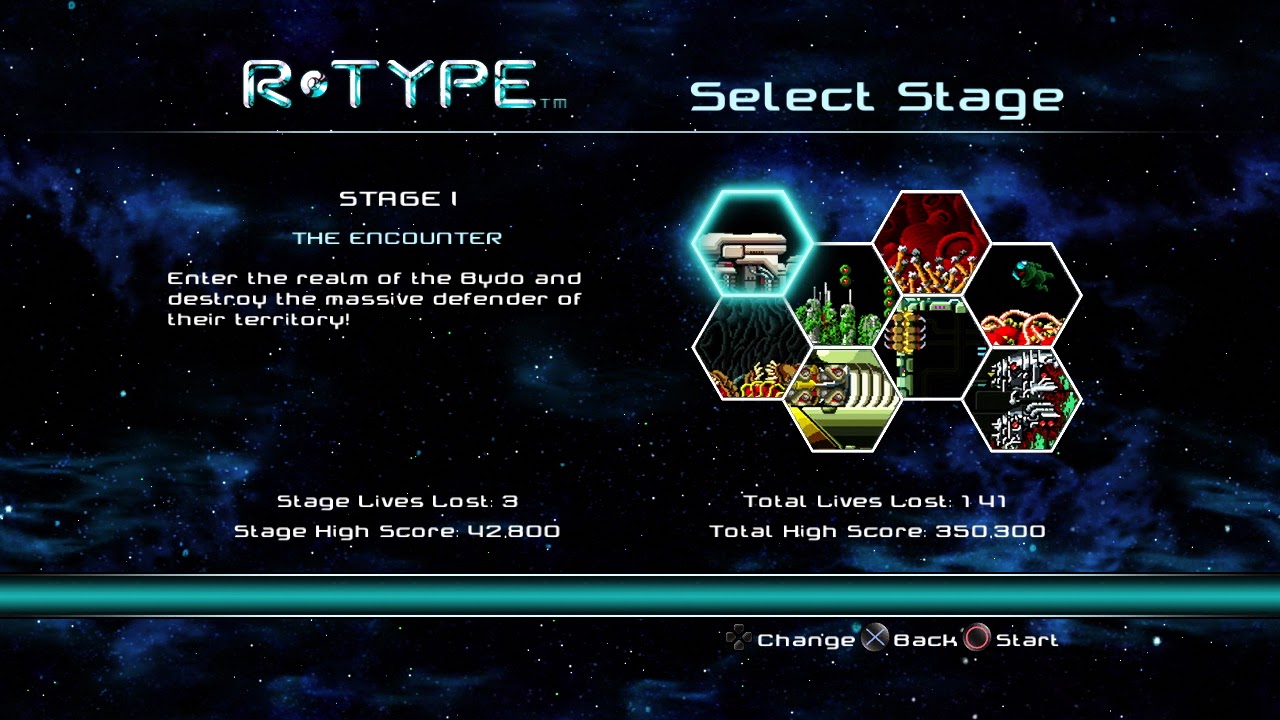 If shoot ‘em ups happen to be your thing, this is one of the influential greats that helped to direct the entire genre of scrolling shoot ‘em ups. The problem with helping to pioneer a genre is that a lot of the things that are considered a given, in this day and age, was still experimental. R-Type Dimensions is a loyal recreation of this, both in terms of what they did right and also what they did horribly wrong. When someone refers to a classic game and calls it ‘Nintendo Hard’ it means that you had best be patient if you want to consider giving it a go. Endless swarms of enemies firing dozens of shots at you is pretty standard, but how about a ship that only fires forward that is constantly getting attacked from behind? Narrow tunnels that you enter into leave you begging the game not to immediately place an enemy behind you that will start shooting. Should you make such a prayer, swiftly you find that the game laughs at the mere thought of taking it easy on you.

Difficulty should not be taken as a sign that this is not an enjoyable game, though. Like most cases of ‘Nintendo Hard’ games, hours upon hours of replaying the game, committing each screen to memory and each boss to muscle memory will get you further each time you play. Not only is it possible to beat this game, but after doing so, given your first couple of attempts, this leaves you with a genuine feeling of accomplishment. R-Type rewards you for learning by punishing you when you fail to learn, and the Bydo are more than happy to inflict this lesson upon you at every opportunity. 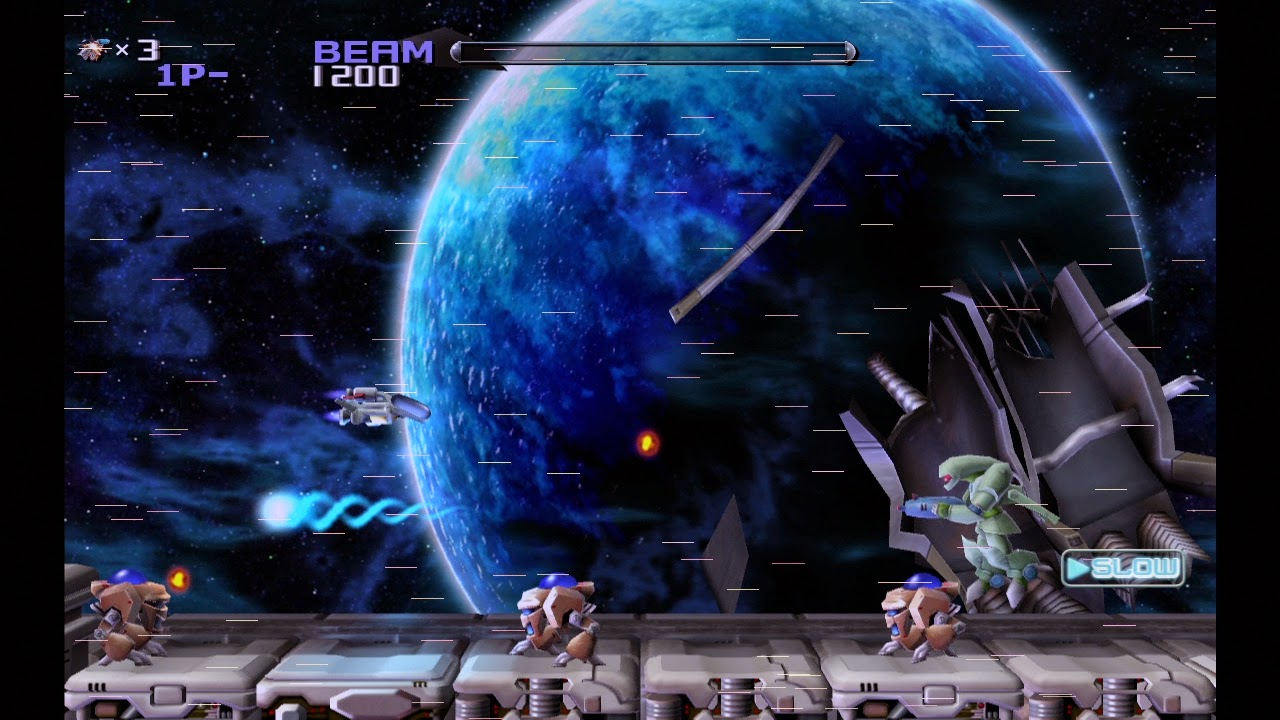 The replay value of this game is through the roof. No new items or weapons are unlocked after each stage, but when the game grinds you to dust under it’s heel, you pick yourself up and try again. Nothing else is going to quite spur you on and motivate you to succeed more than pure spiteful hatred of a game’s mechanics being unfairly stacked against you. In most cases, this sort of hatred would turn me off of a game entirely, but R-Type has simple mechanics that promise you that everything is possible should you just get a little bit better at the game, suck a little bit less, or just play a tiny bit more conservatively. There are times when you will benefit from being right up next to the boss mashing the ‘shoot’ button like the goal is to break your controller, and other times when you really do need to hang back and wait for an opening. All of this goes out the window come the final boss, though. If you are good enough to reach the final boss, you clearly lack the requisite sanity to bear much more mental strain. 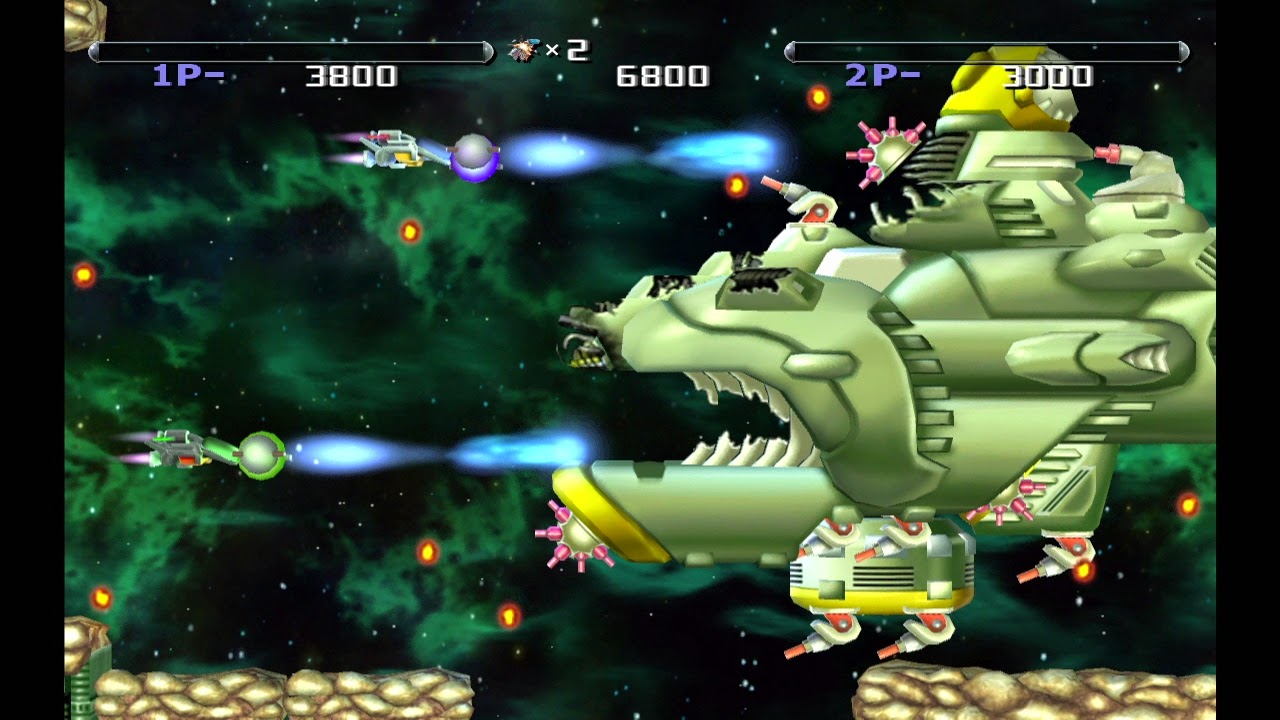 Local Co-op with ship collision, henceforth referred to as ‘divorce mode’, adds a whole new level of challenge to the game. Have you ever wanted to have a two-person cooperative game where you fly through space and can kill each other if you both want to go through a narrow opening? Yeah, me either, but that is the sort of masochistic thing that R-Type dimensions will offer, and you will be tempted to try just once. Resist the urge of local co-op entirely, in fact, resist the urge to play this game when loved ones are nearby at all. They will fail to appreciate the importance of not talking with you when you need them to resist, and you will fail to refrain from taking your own mistakes out on them.

This is a wonderful game if you hold nostalgia for classic scrolling shoot ‘em ups, but outside of that rather specific demographic, I can not recommend this title to anyone else. I absolutely adore this game, despite the visual and aural shortcomings of the genre, and will continue to play it whenever I want to harken back to a time when life was simpler, and your biggest concern was figuring out the timing of ship attack patterns. 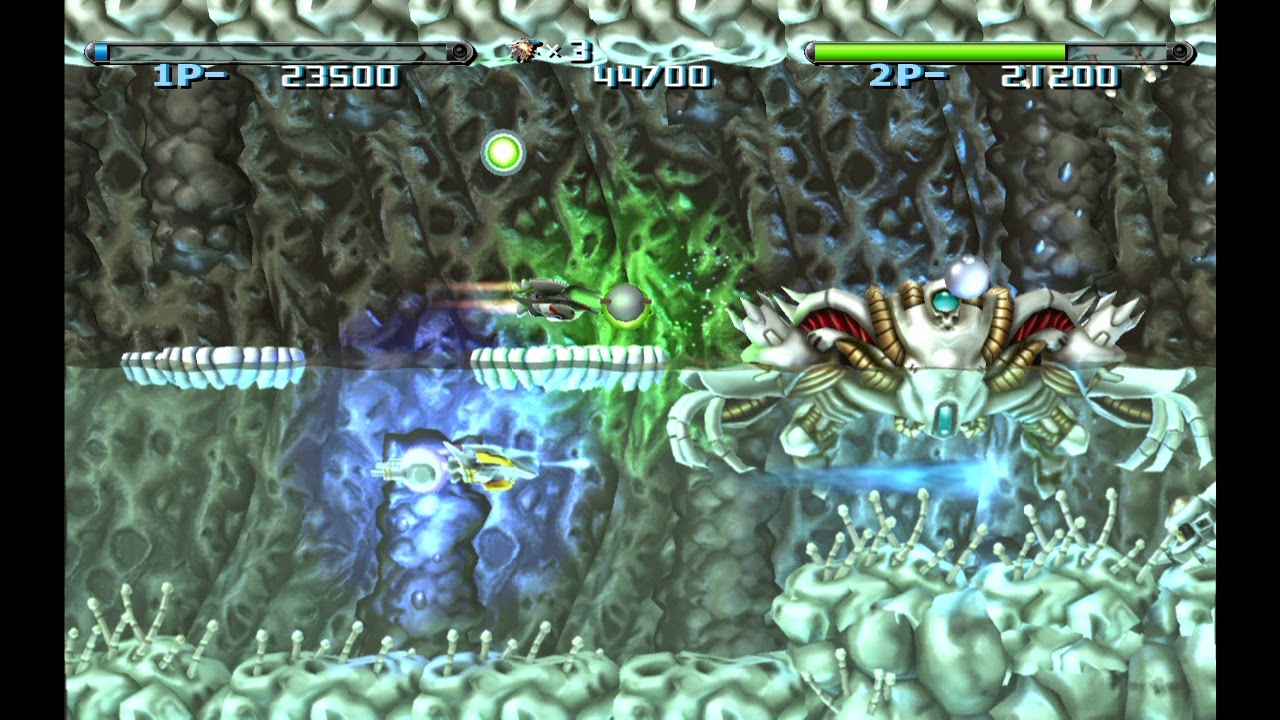