Supergiant Games took a lot of people by surprise with Bastion, an RPG with a warm voice and plenty of gameplay that really appealed to a large audience of gamers. Transistor was a title that garnered a lot of interest back during Sony’s E3 last year, but as such it carries with it some pretty substantial expectations. For the most part, Transistor does succeed in meeting most, if not all of them. 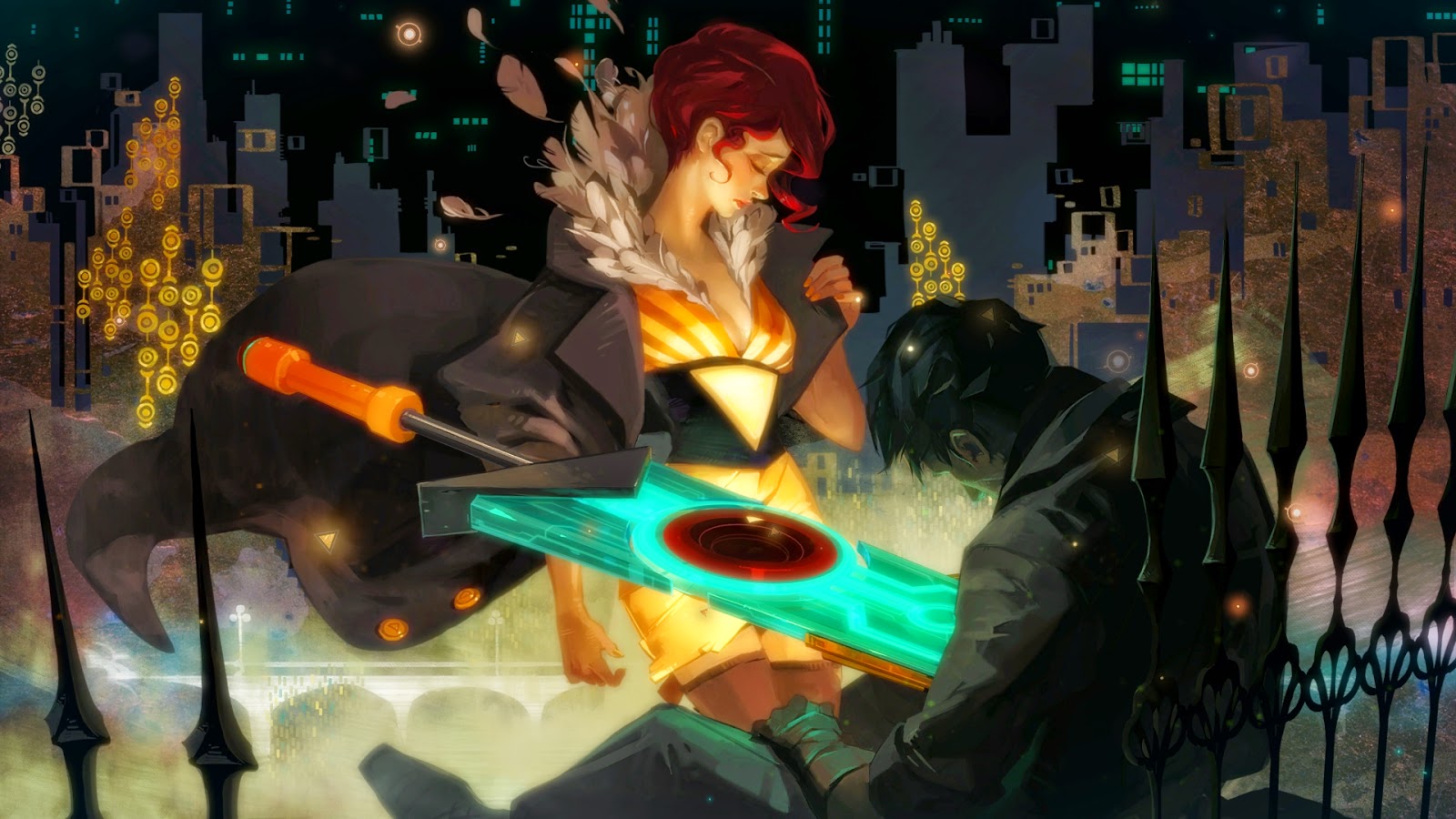 Transistor is set in a futuristic city with elements of science fiction and fantasy mixed together. You take on the role of a young woman named Red, who has taken control of a powerful sentient weapon that a mysterious group of the city’s elite wants for their own devices. 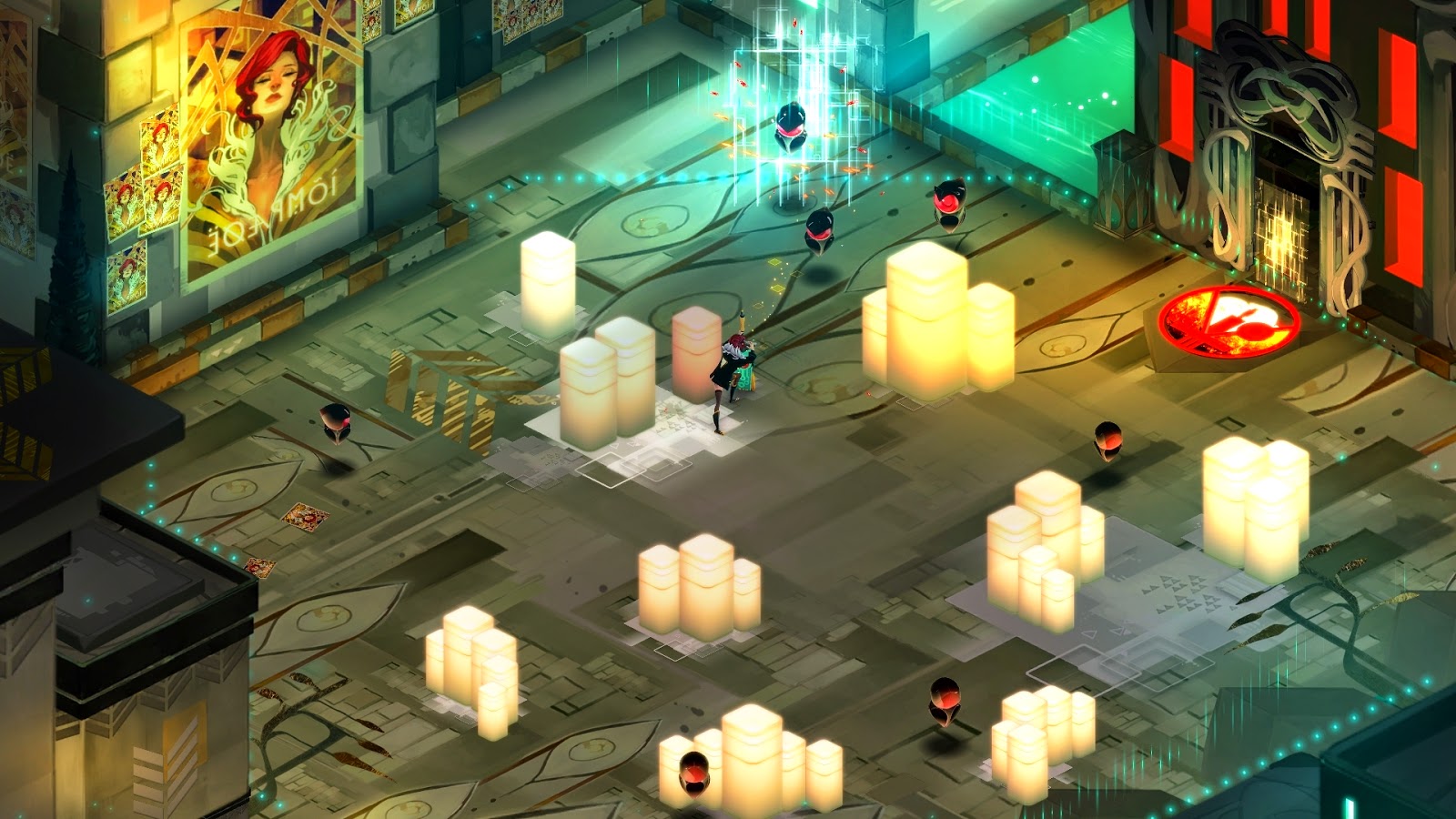 Transistor is more often than not a lovely game, with beautiful backdrops that make up the futuristic city. Levels are transitioned with a simple but larger profile of Red on a bike or a boat – moving from one location to the other as a silhouette. The overall art direction is lovely, but the characters themselves often feel small and lacking in detail. This view is useful during combat, where you often need to see a large amount of the surrounding area, but some of the segments reserved simply for traveling could have perhaps been cropped in a bit tighter to give us a better view of the characters themselves. 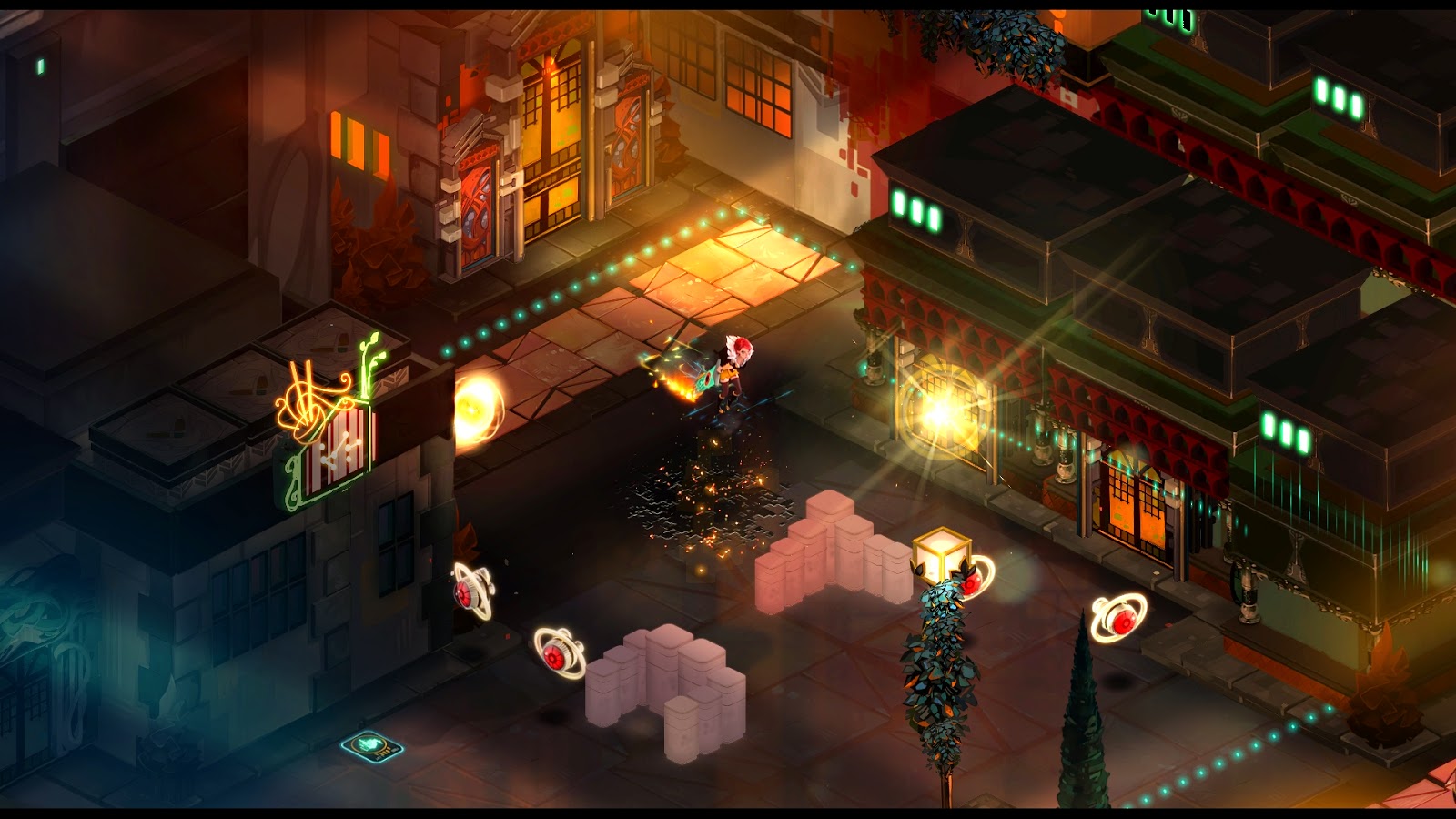 The voice acting from Bastion was one of the most popular aspects of the game due to the warm voice of the narrator. Once again we get a narration of sorts coming from primarily one place, the sentient sword at Red’s disposal, and his work is once again excellent. The sound effects mostly come in the form of combat sounds, while the music is often incredibly lovely and drives along with the pace of the game perfectly. With the Transistor not always talking through everything, there are key moments where you are simply taking in the environment with nothing but background music, and those moments in the game are often among the most moving as this bright, neon city has seen most of the life drained from it now, leaving it a haunting shell of its former self. 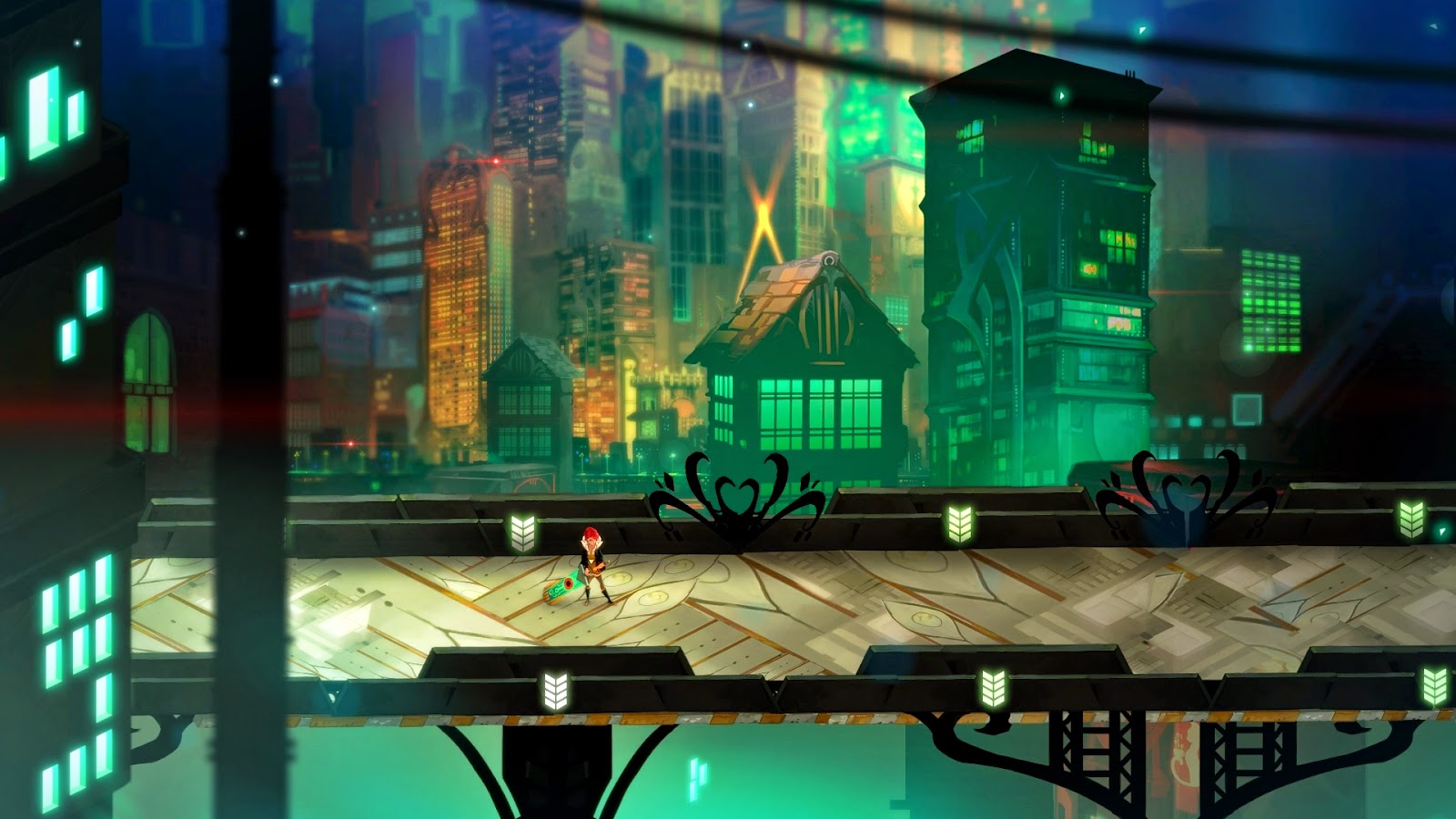 Transistor really just drops you into the fray, which is not necessarily a bad thing, though I was feeling a bit out of my depth during the first fight or two before things really clicked for me. This is an action-RPG title, with some heavy strategic elements as well. You can simply swing away at enemies while trying to dodge them, or you can enter into a mode that lets you put your eggs in one basket (somewhat reminding me of Bravely Default’s combat options). In this mode, Red can be moved around in a way that allows her to stack several moves or attacks in a row. Doing so gives her considerable power – but also leaves her somewhat vulnerable as that meter recharges again.

The combat itself is a somewhat simple affair in the end, as you apply one of four attacks to your face buttons and try to mash away at your opponents’ life. Thankfully there is some decent variety in the skills, but combat essentially amounts to the same thing over and over again.

When you kill an enemy, they often drop cells. These cells are on the ground for a certain duration, they spawn into more enemies for you to kill, so not only do you have to destroy your enemies, but you need to scoop up their dropped capsules. 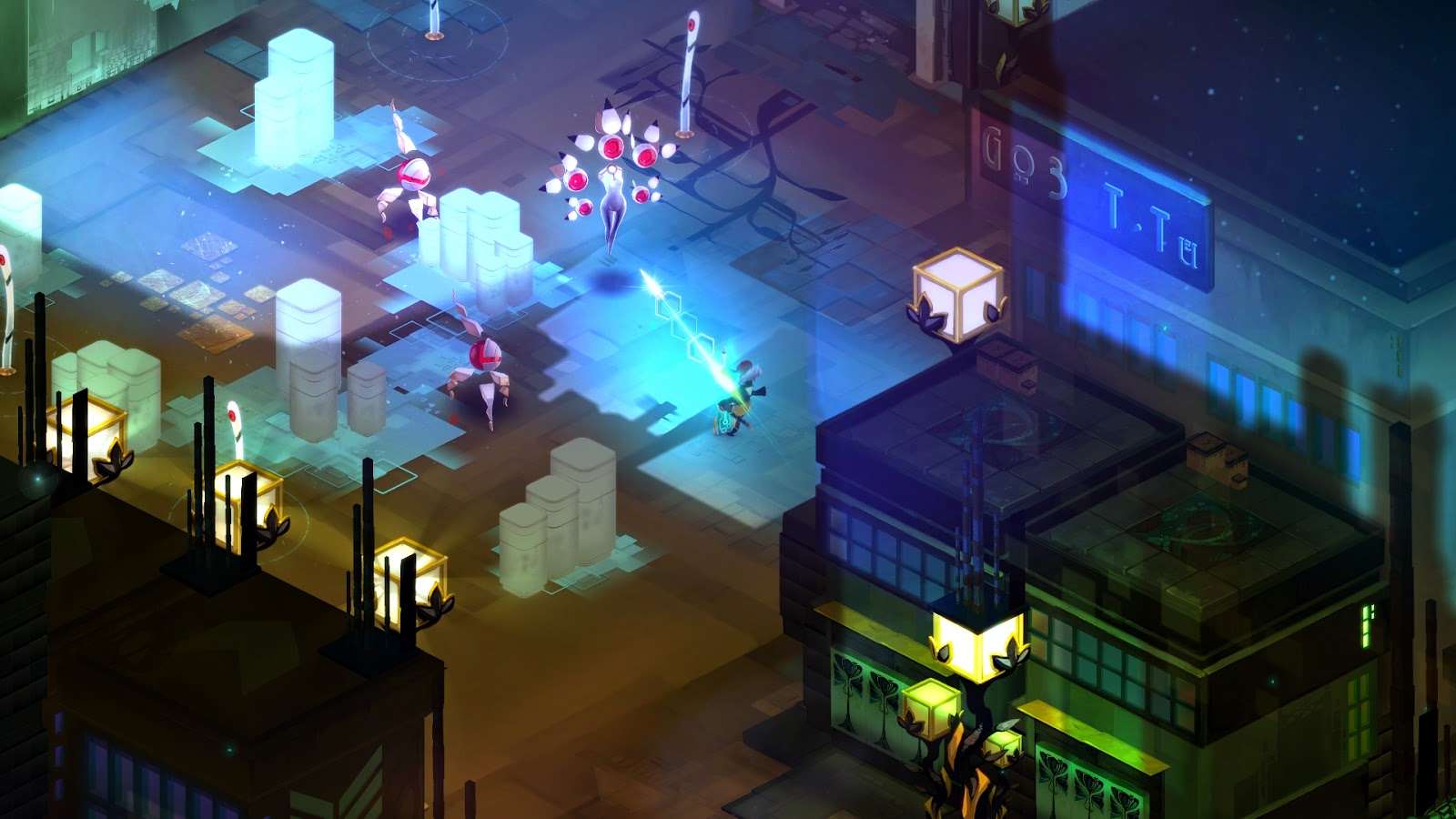 The story is very vague to start, though the pieces start to fill in near the end, which I really enjoyed quite a bit. Most of the narrative comes from the sentient Transistor and a handful of terminals scattered about the city that either have information on them, or contain voice messages for Red on them.

The combat I described above, but one of the things that helps it stay a bit fresher is that you earn new mods throughout the game, and you can apply them to attack – or you can stack them on one of your primary four attacks to add secondary effects. These mods can also be applied as a passive ability. So you could take your basic Crash attack, and give it backstab bonuses or an attack that chains damage to other nearby enemies. Or take the Crash chip itself and apply it for a passive character bonus. The flexibility is quite interesting. When you take an entire life bar’s worth of damage in combat, one of your four primary combat circuits shorts out. In the process you gain back your life, but you lose the ability to attack with that circuit again until you have hit a couple of save stations.

Transistor is a very short game, it should be noted. I started and finished it in the same afternoon. There is a Recursion mode that acts as a ‘New Game Plus” – where enemies are varied up as you play through a second time. Your acquisitions and level carry over, which is nice enough – though the story is so spartan that a replay in and of itself does not really lend a great deal to the experience.

You can extend the game time some by doing the various challenges along the way. You encounter a door several times throughout the game that leads you to a beach away from the action. There you can partake in planning, survival and timed challenges to name a few. Winning each unlocks the next level (up to 7 stages of difficulty) and yields a small amount of experience. The leveling process is decent enough – nothing innately innovative but it provides hooks to continually improve your character.

There are items called limiters that can make the game more challenging (like putting the capsules in a protective shell first, requiring you hit them and then collect them), and in the process reward a small experience boost while you play. 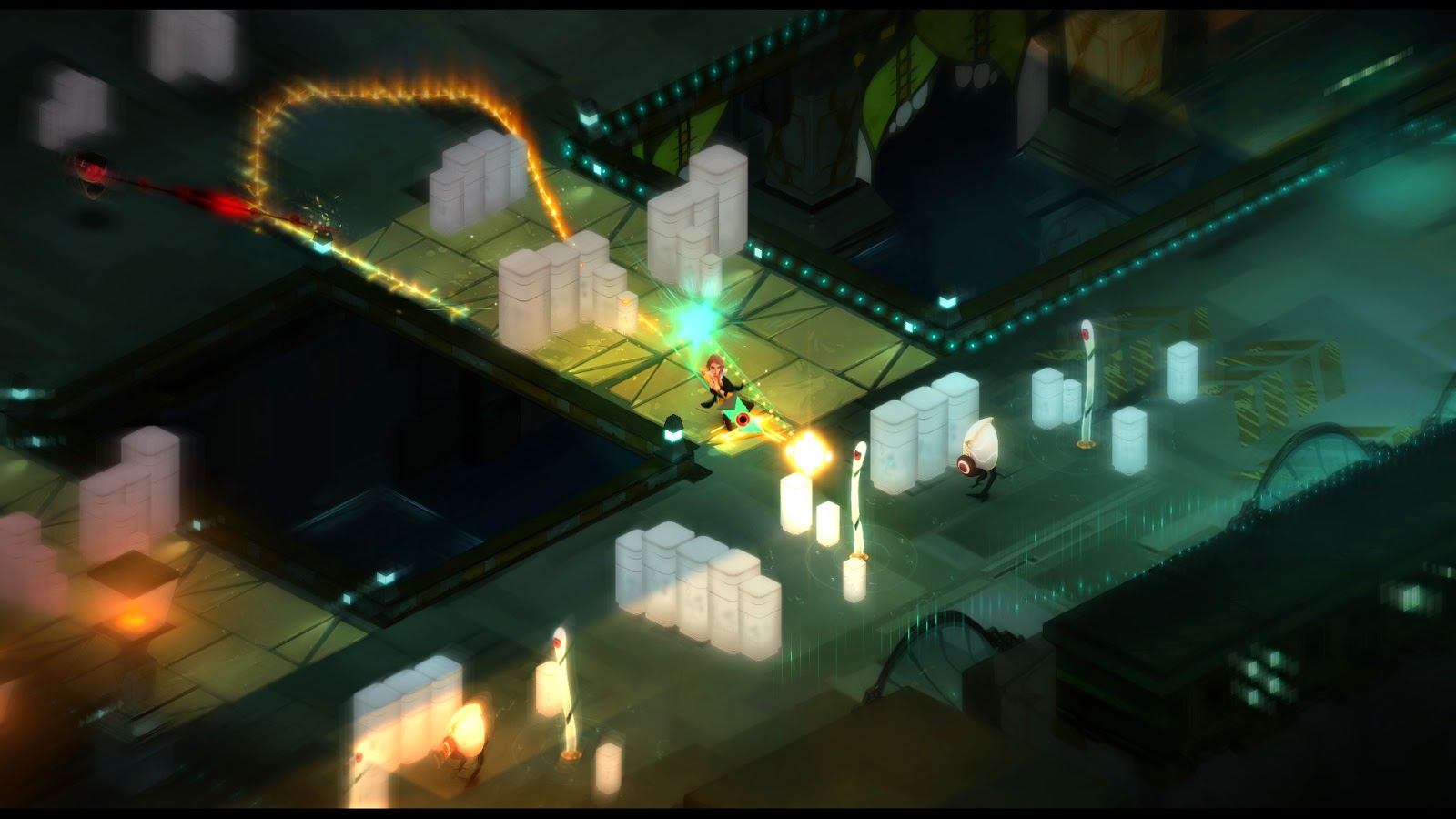 All in all, Transistor is a short but entertaining game that takes enough chances to be interesting, despite the fact the core gameplay is fairly basic. The world crafted serves as an artful backdrop that gives the world you are inhabiting a haunting shell of itself, a sort of lesson learned about the dangers of technology taken too far. A bit more narrative and early explanation would have made Transistor a bit easier to grasp onto, but the experience is still one worthwhile from start to finish.