I recently reviewed the Tales to Enjoy! games Little Red Riding Hood and Puss In Boots for the DSi/3DS here. They were games that felt more like interactive stories or activity books than anything else, and they were definitely geared towards young children. 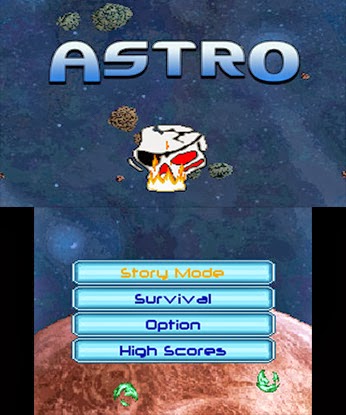 Astro is a different kind of game from Enjoy Gaming, and it no longer says it is aimed at a demographic of five years old. The problem I have with Astro is it does not feel as though the production values are all that much higher. The story is underwhelming, as are the storyboard scenes that play out on the top screen of the DS. They have an odd filter, like the watercolor one you find in Photoshop where the lines are wide, bright and lacking detail. I am all for artistic effect, but that one strikes me as a bit hasty.

It stands in sharp contrast from the crisp, bright visuals of their storybook games, or even the fairly detailed characters and vivid colors found in the game Astro. There are eighteen different kinds of enemy ships, and several different levels with sub-levels. The backgrounds look nice, the ships look nice, so why does the storyboard at the top look so rough? 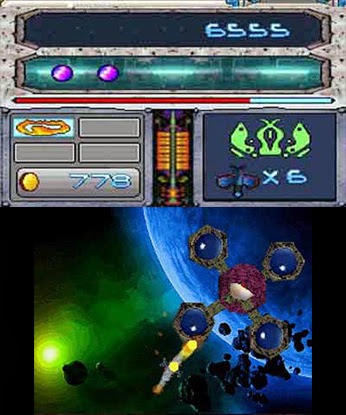 One of my biggest concerns about the two Tales to Enjoy! games was that they lacked good instructions. There is a digital manual you can access within the game, but that just goes over some story basics and control how-to. There is nothing in the way of visual explanation in those games, and that trend continues in Astro where I sat in the level preparation screen not knowing what to click or why I was tapping it.

Astro is a game that wants to be a twin stick shooter very similar but far less impressive than Stardust on the PlayStation Network. The biggest problem of course, is that the DS does not have a second stick. This leaves you controlling the ship with the left pad, and using one of two firing methods with your right hand. You can use the stylus to touch the screen and direct your fire – which seems good in theory but the amount of perpetual movement means you are blocking the screen with your hand and stylus fairly often. The other method is to use the four face buttons on the right, each on representing the direction of fire. This shoots up, down, left and right, but makes angles unreliable.

What it all boils down to is a game that is fairly unremarkable in most ways, though adequate. If you really are looking for a shooter game, there are a couple of modes and three difficulty levels that should be enough to provide you with enough to do to pass the time. It is not the best example of the genre though – not even close. I score it a 5 out of 10.