Following the same suit that most other first person shooters do, there’s an emerging bad guy group that’s out to cripple the USA and it’s up “Bad Company” to go through and stop them. 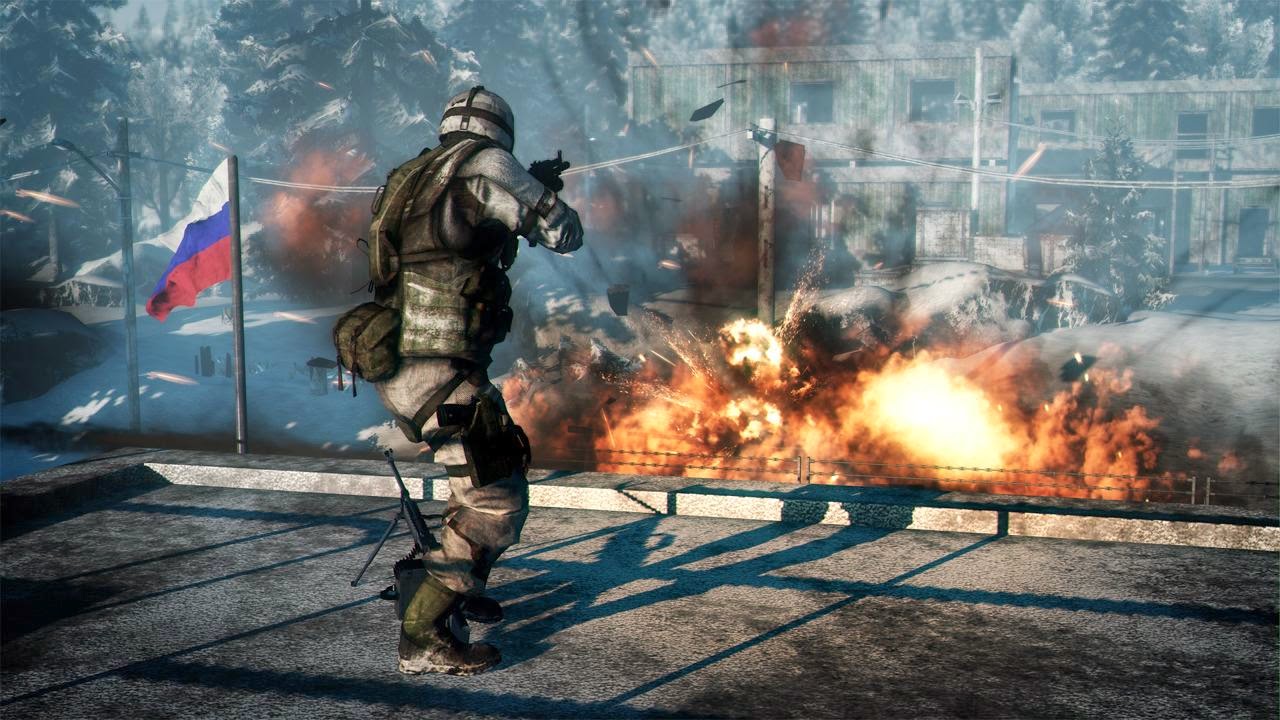 A direct follow up to 2008’s Battlefield: Bad Company, Bad Company 2 (BC2) puts you in the role of Preston Marlowe, a member of “Bad Company.” Unlike some FPS games, though, the first level takes place in 1944, well before the modern-day setting of BC2, which lays the ground work for the game’s plot. 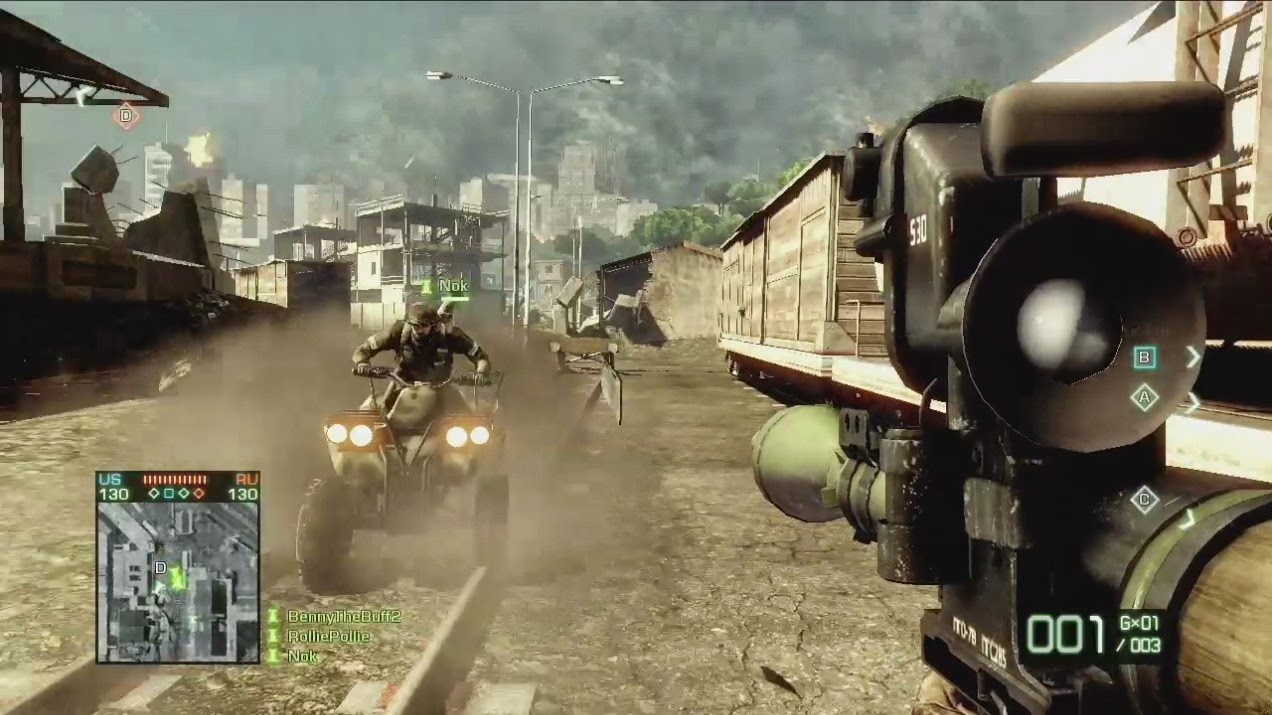 I think that the one thing that I noticed most was just how full the models looked. Everyone looked more than standard models, as they appeared lifelike and moved with extraordinary care. The uniforms of even the most basic units were meticulously detailed, each piece lifelike and it would move in the expected fashion. Draw distances were, for lack of a better term, are glorious; there is the atypical tank mission that had a rich environment and you could see clear details all the way across the map. The biggest downside is that, outside of the aforementioned tank level, the amount of fog in this game is fairly out-of-this world. Everywhere you looked, you’d see fog, even in buildings, to help reduce the strain on the system. 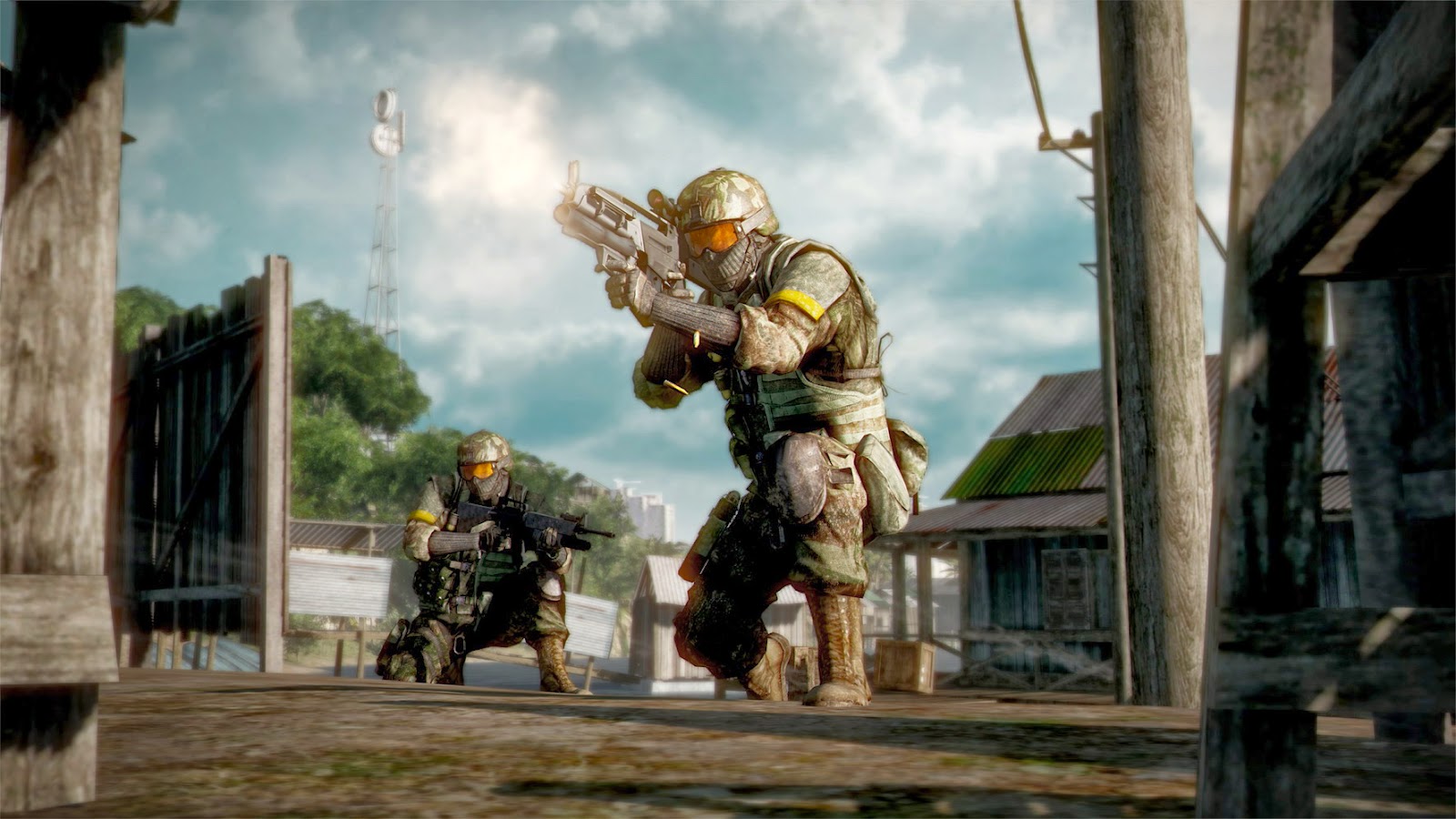 The Battlefield line of games, outside of the Vietnam line, has laughable music that just is. The ambient audio is nice, as you’ll be running through a war-torn village and you can hear, in the background, the sound of other skirmishes between the military and the bad guys. Weapon-fire is realistic and each firearm has a distinctive sound, so for sound aficionados and military buffs (like myself) you’ll be able to tell the distinct sound of a particular shot. It’s quite well done. On the other hand, explosions were quite dull in comparison, and the vehicle-mounted weaponry sounded flat, ultimately breaking the immersion. 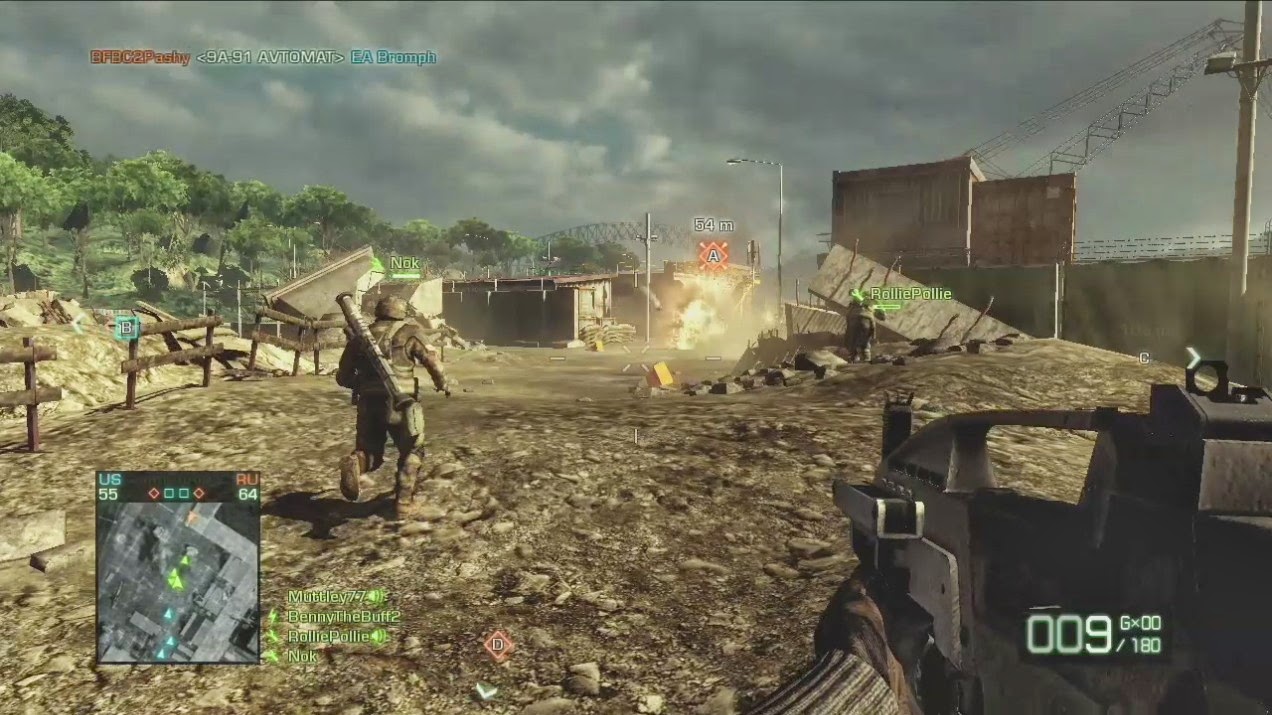 Gameplay – 8.5:
Bad Company 2’s controls are standard fare for the Battlefield line of games, meaning each button has a purpose and fulfills it dutifully. I did find that the lack of the prone position was a bit of a letdown, but the game plays well enough without the prone position. Beyond that, there were a few times I found myself hitting the wrong buttons to do basic things like melee attacks or throw grenades; I attribute that less to the game and more to my own muscle memory, though.
Battlefield: Bad Company 2 is good, plain fun. Rarely, if ever, throughout the single player campaign did I ever think “geez, is this level over yet?” From picking off targets with a sniper rifle to running them down with an ATV, the game was exciting, enjoyable, and provided good, clean firefights. One the other hand, every modern-day FPS trope is here (boat level, driving levels, sniping levels, etc.) which leaves a little to be desired. Even with the well-used modern tropes, the game is still fun, however, it simply ends … just ends. It’s rather a shock to the system, in truth, and left something of a bad taste in my mouth. 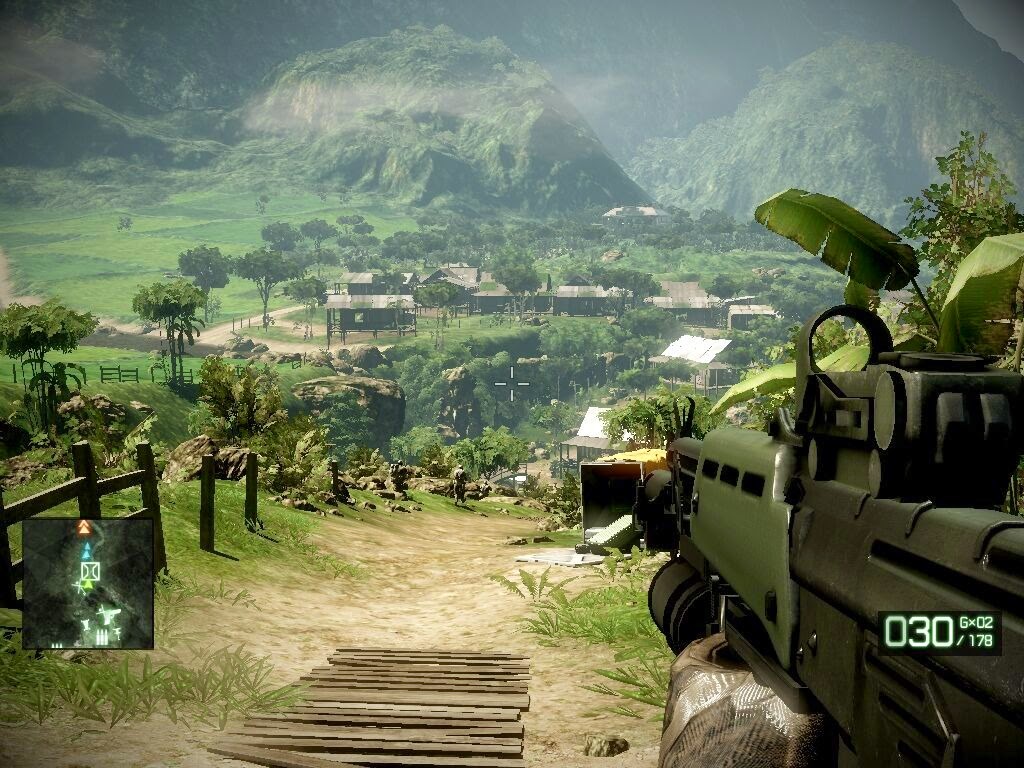 Where the game truly shines is in its multiplayer. To say the least, it’s amazing. Where the Battlefield games have historically been large, open-world maps that required a strategically adept team to adequately dominate a map, Bad Company 2 changes things up a little. Taking the idea from Call of Duty’s arcade-y styled firefights, the maps are smaller, more compact, and incredibly hectic. Some of the larger maps do have vehicles, however, the maps weren’t designed with large-scale vehicle battles in mind, but rather using them as supporting units (as they should be) and not the primary focus. The primary focus for the multiplayer is chaos; infantry-filled chaos, and it is brilliant. 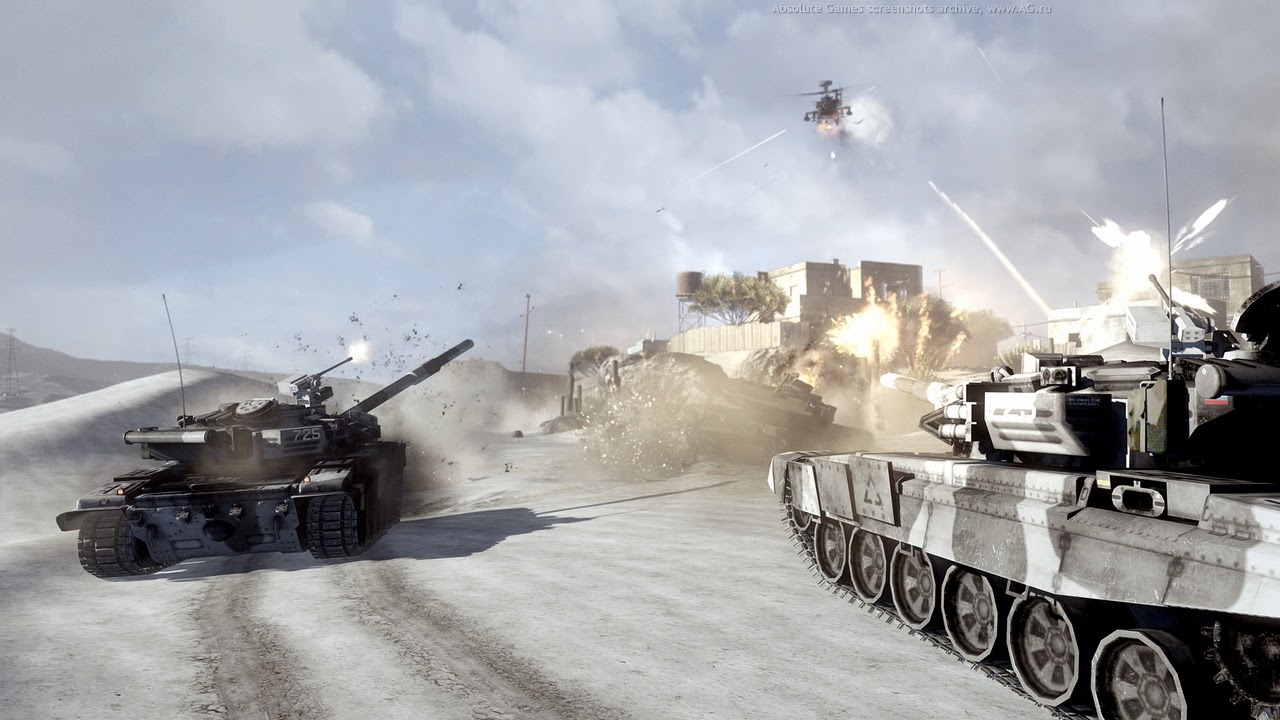 Overall – 8.5:
Battlefield Bad Company 2 is great. While the focus is certainly the multiplayer, the single-player campaign is certainly a good run, providing action, a relatively realistic story line, and about as many bullets flying as you can imagine. For far more depth and excitement, look no farther than the multiplayer, with pseudo-leveling and progression measured by unlocks, the organized chaos is done so well that it’s easy to simply lose yourself for hours in the heated and fast-paced battles.
Review by Robert