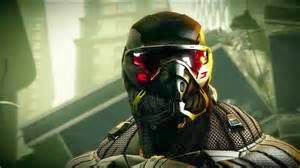 You’re back as the resident nanosuit supersoldier, and are out to take on the massively corrupt corporation, CELL, and you’ve a bit of a grudge. New York City Liberty Dome (as it is now called) has been overrun by vegetation, bringing back the subtropical feel of the original Crysis but with plenty of still-standing urban structures that don’t diminish the city-like feel. 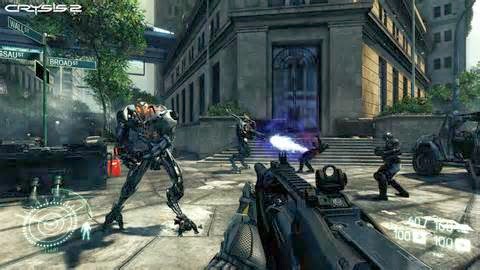 
Needless to say this game is gorgeous. I previously thought that Crysis 2 was the best looking game on the Xbox 360 and when I started up the single campaign I was immediately blown away by the graphics; this game is stunning. Due to the setting you’ll find yourself in the brush more often than not and every step causes bushes and small plants to sway (and rustle) and the rubble-strewn streets are impeccably designed leaving no detail unturned. The character models of the numerous CELL troopers are varied and gorgeously rendered and animated and the CEPH troops that you encounter have been meticulously animated and designed. The different environments you’ll be introduced to were clearly put together in a labor of love and it all pays off. A stunningly gorgeous game with an amazing draw distance (one particular favorite is when you’re circumventing a later objective, a hydraulic dam, and being the sniper-rifle-loving gamer I am, I took a moment to survey the area and pick off some CELL troopers from an incredible distance) that puts the previous games, as well as many others, to shame. 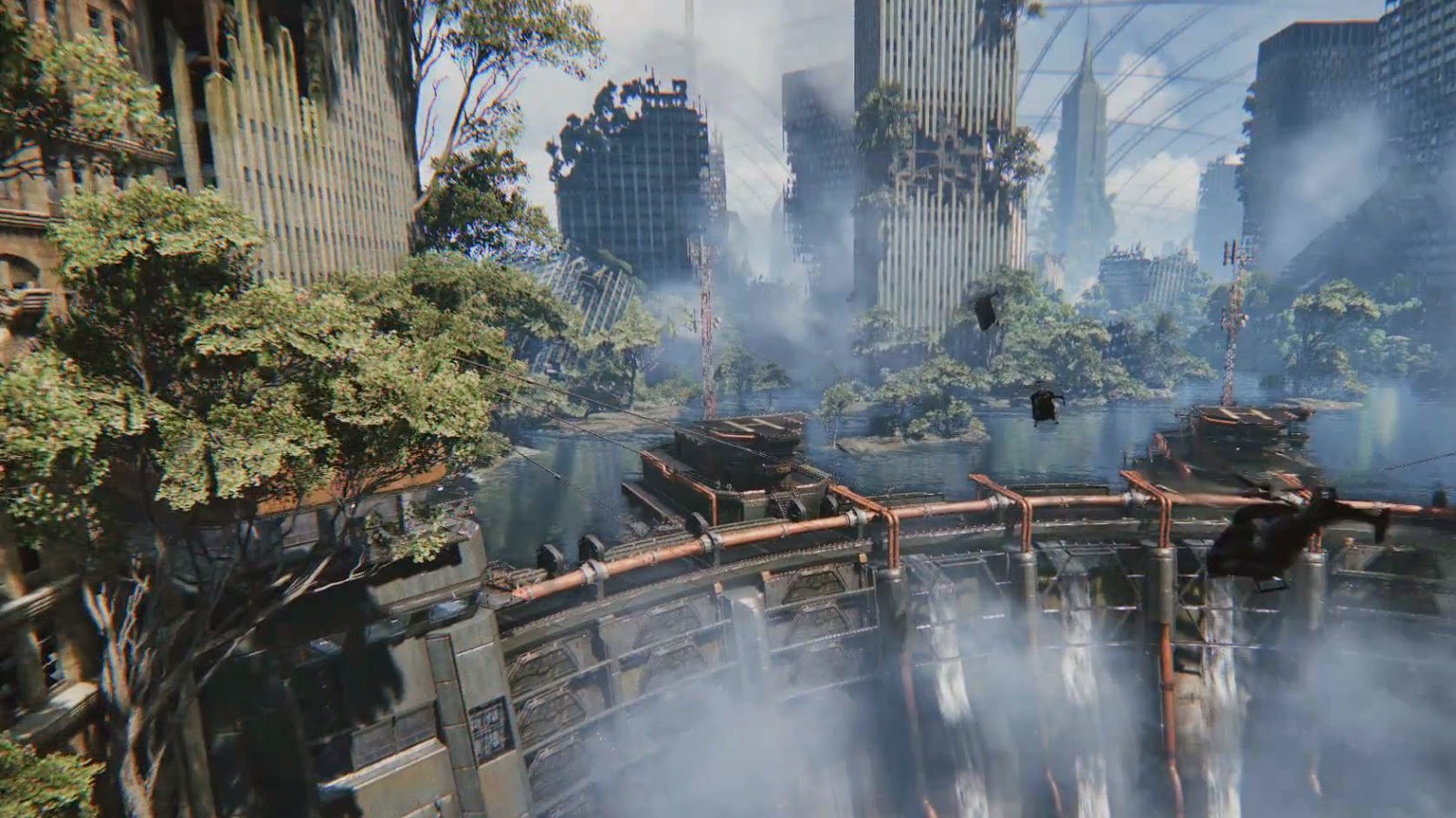 You won’t find the forgettable music from the first game and gone is the distracting music from the second game; the music in Crysis 3 is both tense and depressing (given the environment) and it fits well with the game. However, you’ll find that the ambient sounds (stepping in water/puddles, brushing up against foliage, enemy communication and footsteps, etc.) have all been overhauled and are a joyous auditory experience. Where in Crysis 2 I missed the quality of audio from the first game, Crysis 3 is back in full force with some of the best audio I’ve found in a video game. There are plenty of times where I found myself leaning forward, straining to hear the rustle of leaves or the crunch as an enemy would walk over rubble and it was engrossing. 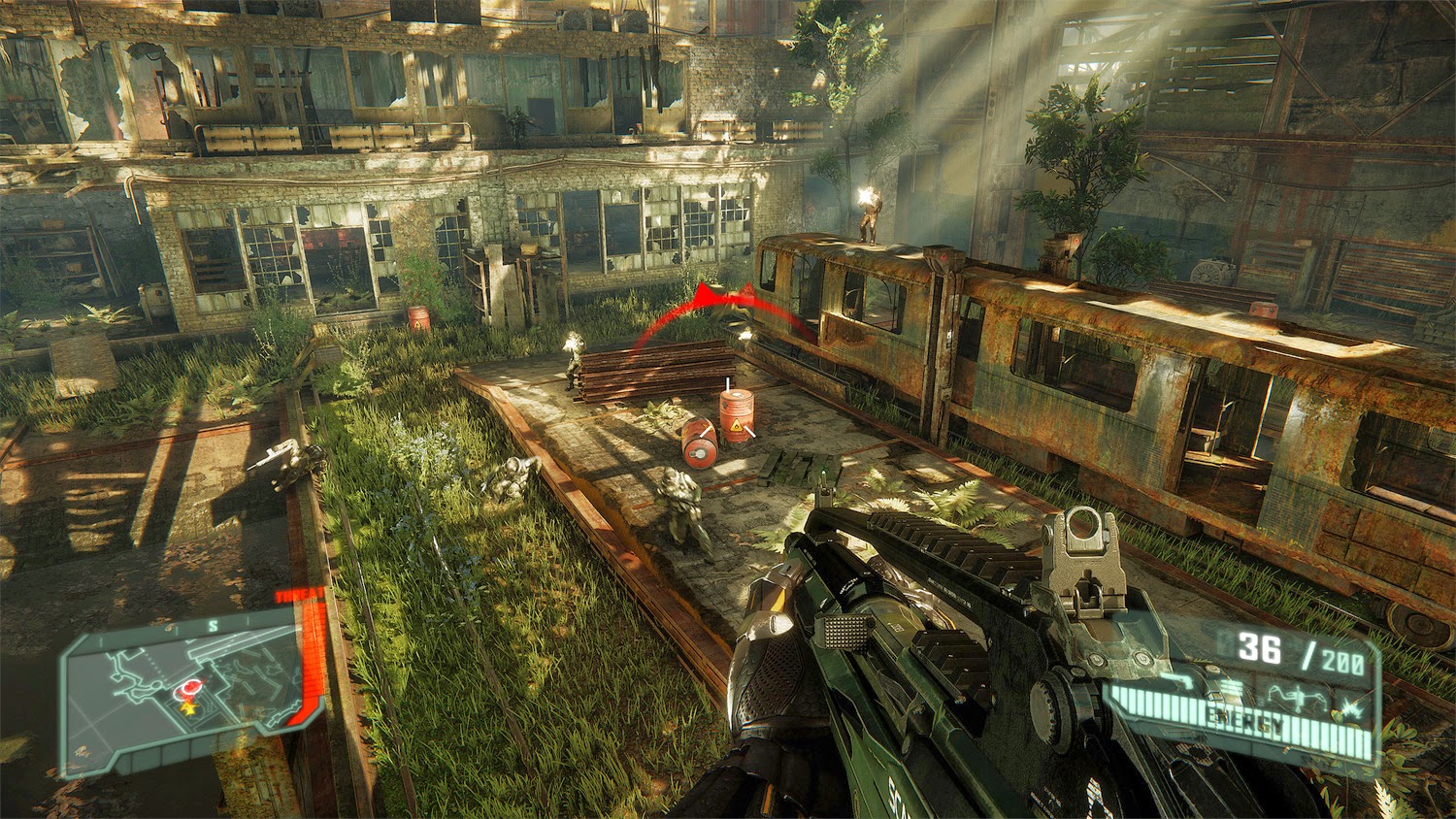 The controls in Crysis 3 are adequate, at times, though, I found myself switching the sensitivity on the fly as the control didn’t feel nearly as fluid as it did in the previous games; while adequate, something just felt off and it didn’t set right with me. The control scheme is largely identical to the previous iterations (still no Prone, though, which I don’t like at all, especially with the way some of the maps were laid out) with buttons having multiple actions (tap X to reload, hold X to grab on to something, etc.) and, as mentioned previously, there seems to be something just off about the sensitivity as I was constantly changing it.

Something feels off about the game; I’m not quite sure what. As mentioned earlier, there is something about the sensitivity of the controls that just turns me off and the pacing is far more linear throughout the course of the game, feeling a lot more like Crysis 2 than Crysis, which definitely detracts from the overall immersion and experience. There are still times where you can go through and take multiple routes to accomplish your objectives, but you’re limited to maybe two or three pathways compared to Crysis 1’s wide open world. It’s not a terrible experience, but you definitely feel more locked in and you don’t have the freedom that you once had. In a game that totes the main character as a “hunter” there isn’t much freedom in being able to hunter your enemies. They have added in neat little abilities, though, namely the “Hack” capability that allows you to hack a large number of objects, one being the sentry turrets. There is a level of satisfaction and cloaking then hacking a turret that’s in the middle of a handful of CELL troopers and watching it mow down the enemy; throughout the game, it never really got old, as it brings a new level of tactical aggression to your capabilities. For the most part, though, the game is far more ‘on-rails’ than previous iterations and the experience certainly pegs the gameplay as ‘just another FPS game’ with a few added abilities. 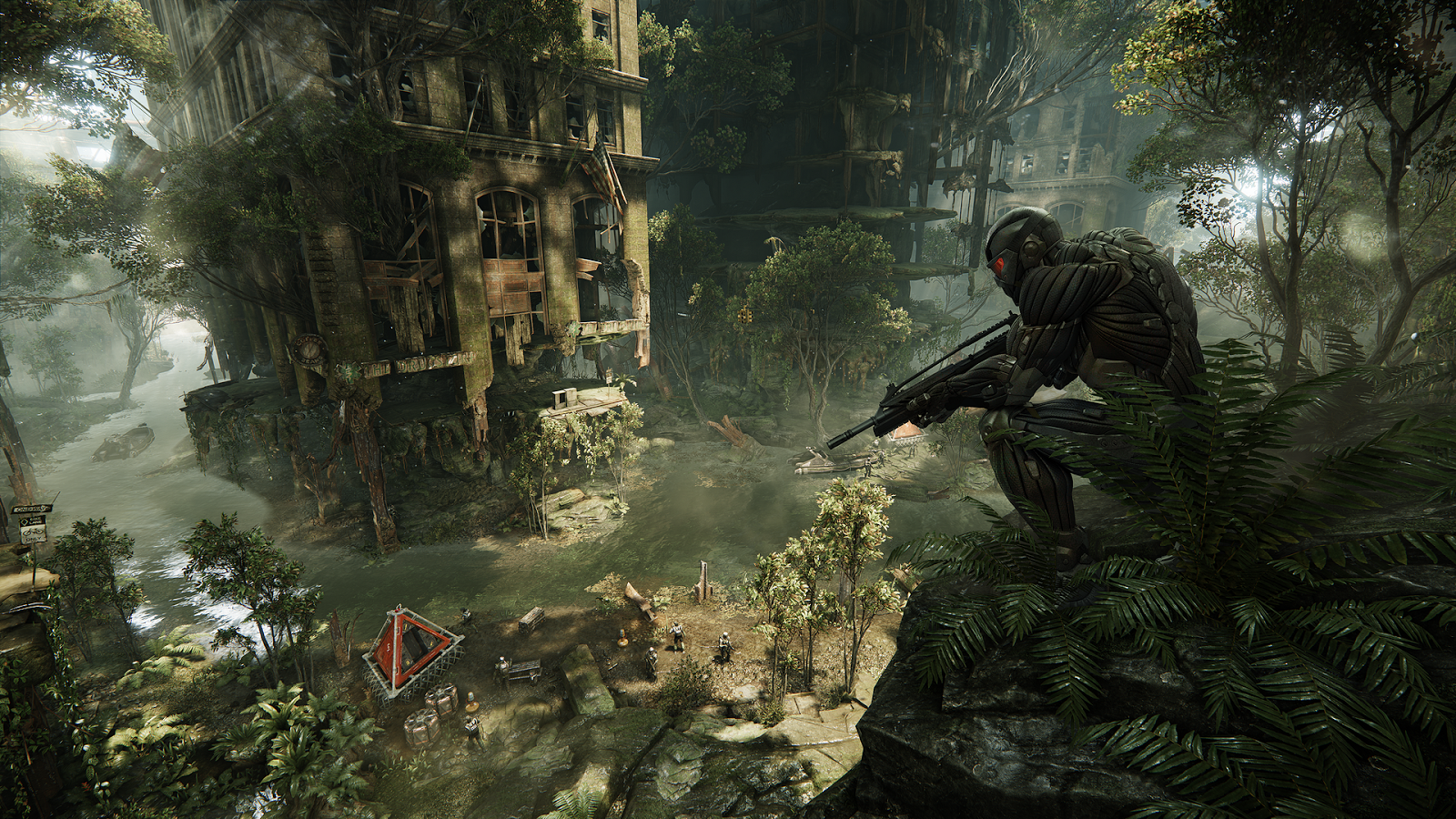 Crytek certainly added a large number of extras to Crysis 3, from a far more robust multiplayer experience (though still lacking) to a number of suit upgrades, weapon upgrades, abilities (see Hacking above), and tactical situations, bringing it out of that generic FPS sci-fi game and adding some RPG-like elements. However, to me, it didn’t necessarily all fit properly together, as there is some disjointed concepts throughout the different armor abilities, though, the ability to set “packages” for your different armor abilities is nice, not once did I find myself changing from one package to another as the kit I built for myself was all I needed for my style of gameplay. In retrospect, more earnest players could get numerous plays with different armor packages/weapon kits, however, the lack of freedom in mission completion brings little-to-no desire to go through multiple playthroughs. 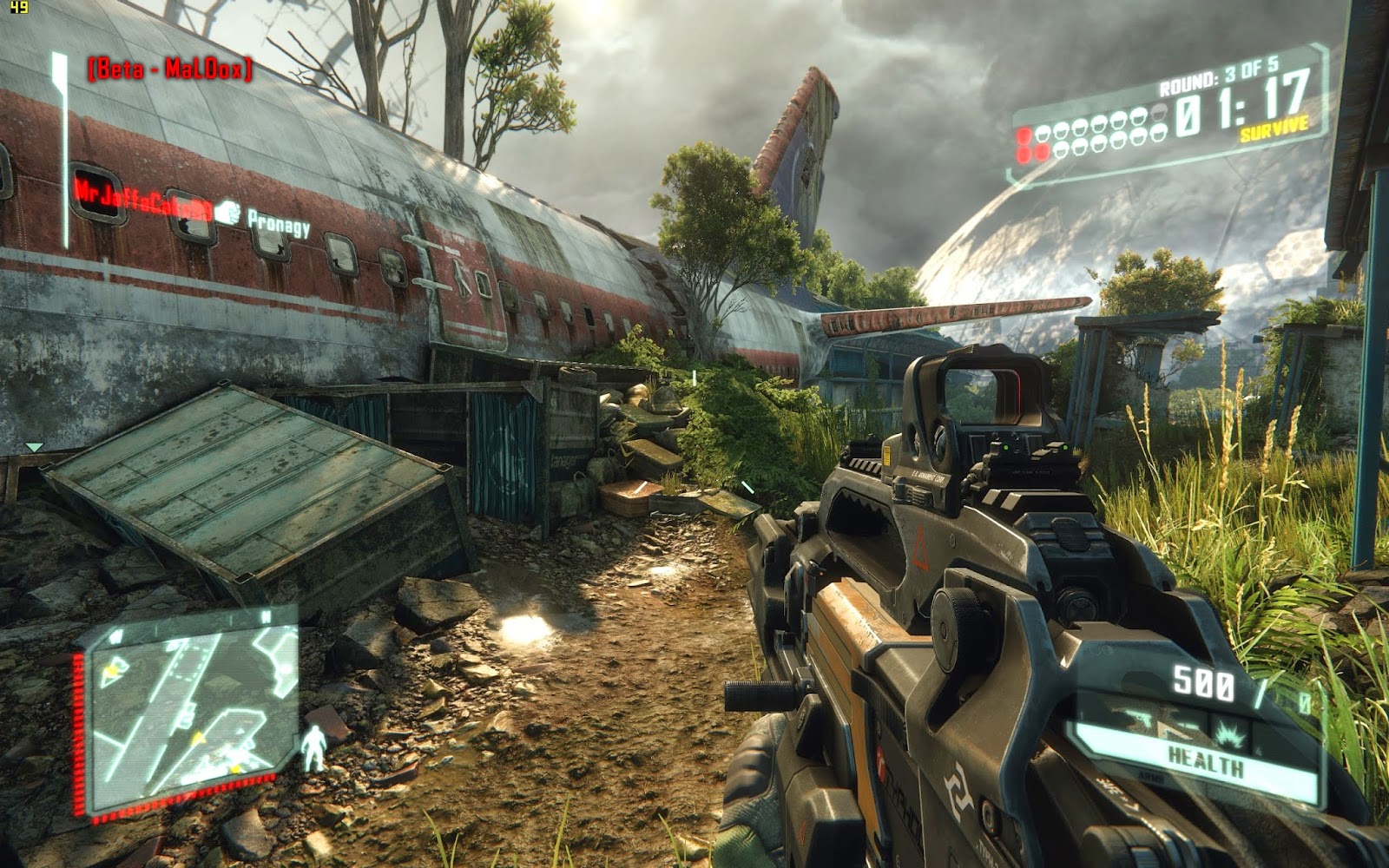 Crysis 3, while a gorgeous game with some neat additions, felt fairly lackluster compared to the previous games. It is not, however, an un-enjoyable experience, as it is a superbly built first person shooter. It does not, however, live up to the expectations of the two previous games and is quite fairly the weakest of the trilogy. The improved graphics and stellar audio can only provide so much and when you have a story that is found wanting and the lack of operational freedom (which is what made the first and second Crysis games so interesting and fun to play) it creates an experience that doesn’t feel as glued together and creates something of a void once you see the credits roll. Crysis 3 is a fun first person shooter, though, I can’t help be feel that it’s just a near-clone of some of the other first person shooters out there, albeit one with a few more abilities. All-in-all I recommend playing Crysis 3 for the experience and to get back into the nanosuit, though picking it up on sale would be most recommended.