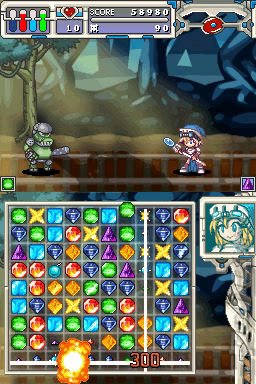 Puzzle games are among those my son has almost no patience for. Puzzle Fighter, Gyromancer, Puzzle Quest, Puzzle & Dragons and more – I actually enjoy them quite a good deal. I think they are fun, they give me something to do in shorter bursts of time, and as several of those titles above have proven – they can be mixed with other types of games to a great deal of success.

Tetris and Columns were great examples of puzzle titles that really were just about the puzzle aspects. You played them for a short time, maybe a few times in a row, and then you moved on to something else. The RPG hooks of Puzzle Quest or Gyromancer kept me coming back for hours until I beat them, and the same can be said of Jewel Adventures.

The premise is fairly simple, but also pretty effective. You control a mage who sits at the right side of the screen. As time passes, an enemy will start marching along dutifully from the left side of the screen. If you do not destroy it or complete your level objective quickly enough, it will kill your mage by draining all of her hit points. There are a few other things to keep track of as well – such as coins (that you can use to purchase additions for your small village) and magic (used on spells that do things like change gem types), but it is the hit points that more or less serve as your time. 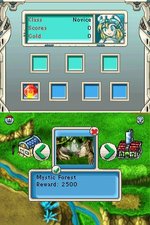 Objectives are generally straightforward, such as banishing a set number of a specific type of gem, or completing patterns on the screen by clearing gems resting on top of the patterned background piece. In between stages you can spend your coins on adding to your village, buying buildings that give you more spells for the actual gameplay.

The music is simple but adequate, and the visuals are actually bright and fun, if lacking in lots of flashy animation. The biggest issue with the game I had, was that the controls required the use of the touch screen. This makes sense when you are trying to apply a spell to a target area, but the gems are so numerous and in such a relatively tight space, that sometimes you wind up tapping and sliding the wrong thing. I think I would have preferred a more traditional method of using the pad and button to move a cursor around.

All in all, Jewel Adventures is fun enough. It is not by any means the best in class for this type of game, but I enjoyed it all the same. While I played the game on my 3DS, it is actually a standard DS game. I would score it a 5 out of 10.