Monster Monpiece is a game that at its core is an excellent collectible card game with entertaining battle mechanics. What it is best known for is the attempt to do something different, and certainly awkward in the card leveling system. It is unfortunate that this is what the game has been known for, because there is an excellent game here to be had. 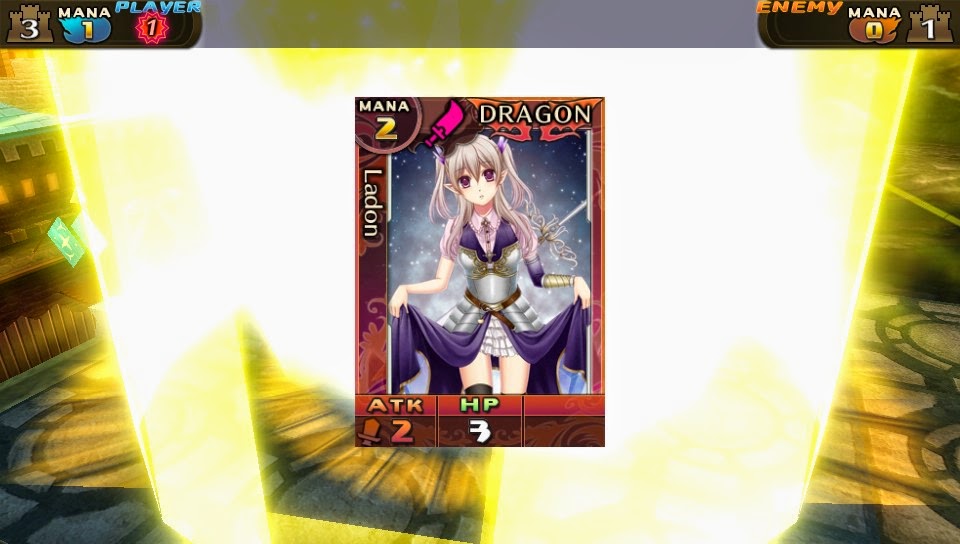 Early on when you are playing Monster Monpiece, there is a lot of text thrown at you as characters talk among themselves and try to establish their personalities. By and large the characters are serviceable, if not the most interesting protagonists, but they do manage to set the stage for the game itself. The premise starts off simple enough, with some young girls at an academy that are learning to control monsters – the cards you will collect. Things predictably take a turn for the worse as an evil presence makes itself known. The story unfolds from there, never really surprising me along the way but setting up a fair enough backdrop for the card battling gameplay to take place.

The two strongest elements of Monster Monpiece are its strategic card based combat, and of course the collection of cards. Collecting cards in a game like this is a joy that I never really get over. I used to collect sports cards as a kid, sunk more money into Magic: The Gathering as a teen and then played more than my share of digital collectible card games as an adult. I am the target audience for this sort of title where the excitement of getting something new and immediately going into my decks to tweak and optimize them is something I look forward to. There is a great set of swipe animations associated with ‘cracking packs’ as I have always called it. You swipe diagonally across the unopened pack to cut away the wrapper and then drag your finger horizontally across the cards to flip them over and reveal what you received. You can earn packs readily through combat or purchase, giving you lots of opportunities to add to your collection.

As for the combat itself, you draw your hand at the start of combat and place a single card on your half of the battlefield. You need to have enough mana to cast the card, and mana regenerates/grows each and every turn, so mana management is very important in the initial few rounds. Your opponent then plays out their cards in similar fashion on the opposite side of the narrow, horizontal field. Most cards then march forward one step toward the opposite side. The goal is to have your card, represented with a cute chibi style character, strike the opposing headquarters. Do so enough time before yours is destroyed and you win the match. 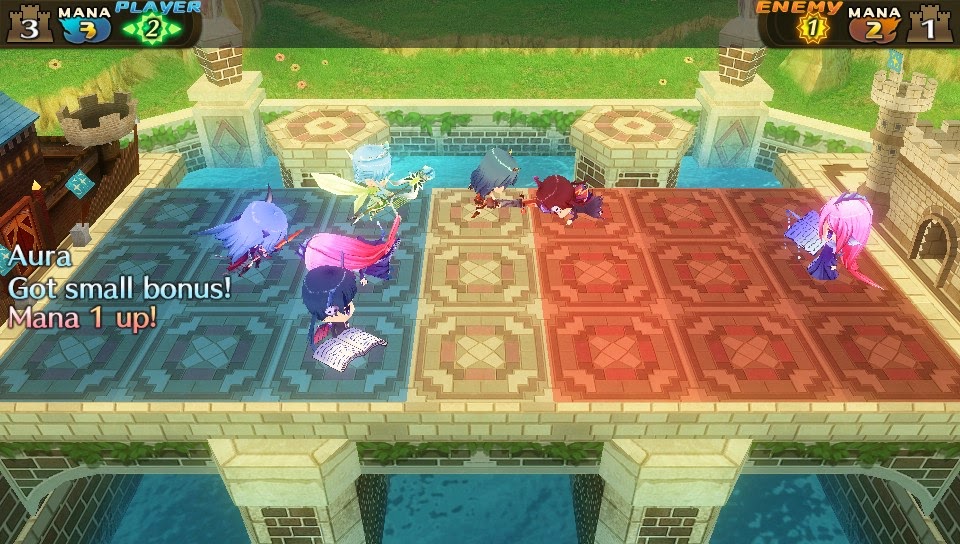 The creatures you summon encounter one another along the way as well. Do you focus on clearing a lightly or unused lane of your opponent’s to try and strike their headquarters as quickly as possible, or do you drop in cards that will block your opponent and take your time looking for an opening? The earlier battles are quite easy so the strategy is not as big of a factor here, but as the game progresses more unique twists get added to the system. There are different types of cards, some that fight at close range, others that operate better at ranged attacks but generally have lower life totals. Some cards act as healers or boosters if placed behind these ranged and melee units, but are fragile as well. Then there are different color types, or ‘auras’ that can grant boosts to your team if you cast two or three of the same color in consecutive turns. Some cards have special abilities as well, such as the ability to remain stationary (handy for creating a strong defense) or they can move on the first turn they are summoned and plenty more.

Add to it that cards have different ‘types’ and that cards of the same type can be fused together, or that some cards have special effects on the battlefield when they summon or die and before long it is easy to see that this card battler has more than enough depth to hold its own with any similar game out there. That it is wrapped up with some light RPG elements and a pleasant enough storyline and cast of characters, and it feels like Monster Monpiece should be discussed as a top title for the Vita.

Unfortunately the problem that occurs with Monster Monpiece is the controversial leveling system for the cards. There is plenty of fan service in the somewhat scantily class, all female cast of characters and cards. This is most present however, when you level the cards. This is when you turn the Vita on its side and use the right analog stick to pan around an enlarged portrait of the character card and rub, pinch or tap on the card in various locations. Doing so in the right spot at the right time causes the tension gauge on the left to increase (and often corresponds with the girl making a variety of appreciative sounds as well). The objective is to max that bar out before the one minute timer expires, which often leads to frantically rubbing the Vita in a fashion that might be deemed as socially unacceptable in many places, and even in the best of private scenarios could feel awkward. 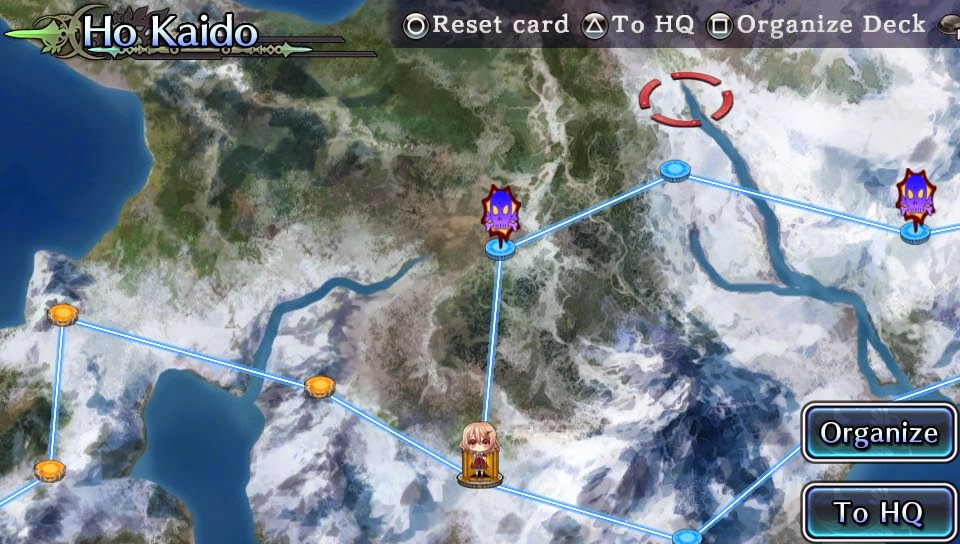 I am in my late thirties. I hardly ever play my Vita except at home anyway, or maybe in the car if my wife is driving. She has an open mind and does not mind in the least what I am playing, and therefore I personally am not offended by this leveling system as some people were. Unfortunately it suffers a greater sin than just being socially awkward – it is kind of boring. In the video game world, creating an important element to a game that has so many potential negatives – being boring, awkward or frustratingly difficult – at the end of the day that is a game element that probably should have been left on the table.

You earn points as well as gold after every battle, and you have to use these points to attempt to unlock these cards. The trial and error involved usually means you are going to fail the first few times you try to level up one of your cards in this fashion, wasting points and time – and frankly a lot of frantic, possibly unwanted hand movement in the process. If these were just cosmetic upgrades, it might not be so bad (though the collector in me would still wind up doing this part of the game, even though I really do not care for it), but there are stat boosts these upgraded cards receive as well. You can beat the game through good deck building and clever deployment without upgrading any of these cards, but I would rather not.

It is a creative use of the Vita’s touch screen capability – I can give credit there to the system. Leveling up cards also makes a lot of sense as a mechanic in a game like this. The touch screen itself is used effectively throughout the game, whether it is navigating the overhead map (in fact, this works better than trying to use the sticks to move your cursor around, where it sometimes becomes rather jumpy) and menu items.

I can appreciate that Compile Heart wanted to do something somewhat novel, and this leveling system certainly does the job on that front. I just wish it was a bit more fun and for the sake of wider adoption – a little less awkward. I have no problem at all with the card art or the basic idea to the leveling process, but not everyone will feel that way and that has unfortunately centered the conversation on one of Monster Monpiece’s biggest weaknesses.

That is a shame because at its core it really is an excellent collectible card game with an incredibly well conceived strategic combat system that I would recommend to gamers who enjoy this genre and can look past the leveling system. I know I was certainly able to do so, because the thrill of collecting new cards and making new decks was absolutely addicting for me. That it plays out so effectively in combat just rounded out the most important part of the package for me.

We score our games on a scale up to 10. You can read more about what we look for in a game in our Game Library page. Want to know more about the people writing our reviews? Go ahead and meet the team. Agree? Disagree? We want to hear your opinions either way – so feel free to leave a comment below and thanks for stopping by