Pulstar is an extremely fast-paced, arcade-style twin-stick shooter that totes no-nonsense gameplay and is brutal in its singular focus; show no mercy. Admittedly I am not very good at twin-stick shooters / bullet-hell style games and thus have stayed away from the genre since playing Ikaruga when it was first released (that game was brutal), but when I got the opportunity to review Pulstar I decided to give the genre a second run. Suffice to say, I am glad that I did. 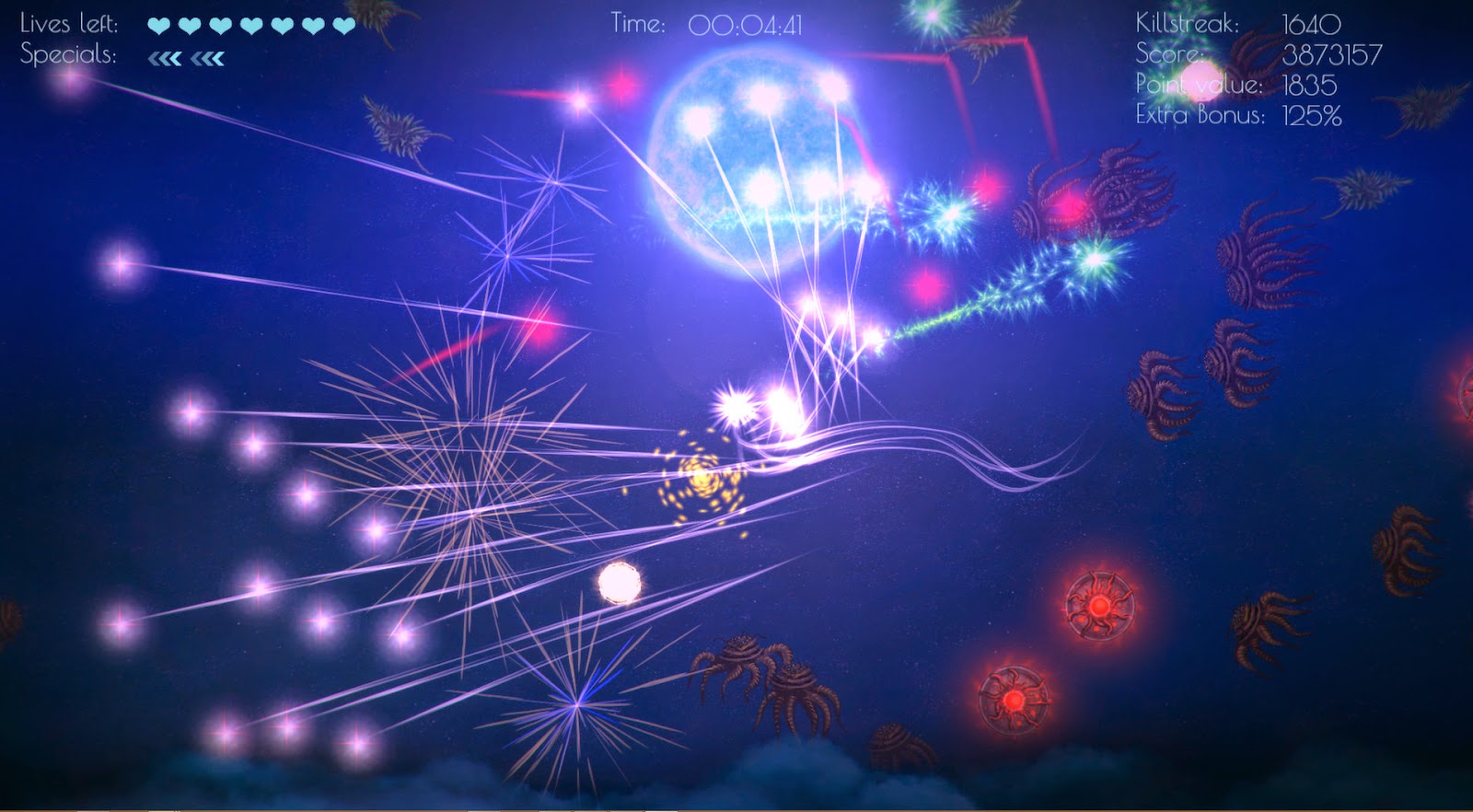 When you first load up the game you are greeted with a simple menu system that sets the expectation that this game is straightforward and has a single point; shoot as much as you can for as long as you can. Features such as split screen local co-op that supports dual analog controllers, my daughter and I played together, her with a PlayStation 3 controller and I with a 360 controller, progressive audio and video alterations as you last longer and longer, local and global leaderboards, as well as in-game powerups and super weapons. Some of these are staples of the genre, but what I found most interesting was the way the audio and graphics change the longer you stay alive. The first minute or so of being in game will have quite pleasant music, clean sound effects and a relatively laid back feel to the effects and background art. However, after surviving for five minutes, the music is harder, more frantic, and faster paced where the sound effects sound as they have more of an impact on the aliens, and there are a significant number of changes to the background. There will be pulses sent out from the moon, causing potential confusion as you are racing around the screen trying to survive and the cloud formations along the edges will have flashes of light in them, adding to the already-hectic atmosphere. It is actually a very neat effect that is only a small part of what keeps me coming back to play a few minutes here and here.

Graphically speaking, Pulstar is simple yet elegant. Your ship or character is a flashy ball of light that shoots smaller flashy balls of light and even with all the crazy visuals that are happening at any given time, the bright pulsing ship is easy to spot and will rarely get lost amidst the explosions and enemies. Running even on the integrated graphics card on my laptop, at 1920×1080 the game looks clean and runs at a constant 60 FPS, however when I run using the dedicated card the FPS stays at 120 frames per second and does not waver. The graphics are clean and do not hinder you as there are dozens of effects and enemies on screen at any given time. On the outside though, there is a limited number of enemy character models but I do not think there will be much time to admire the graphics, as the sheer level of crazy will keep you busy. 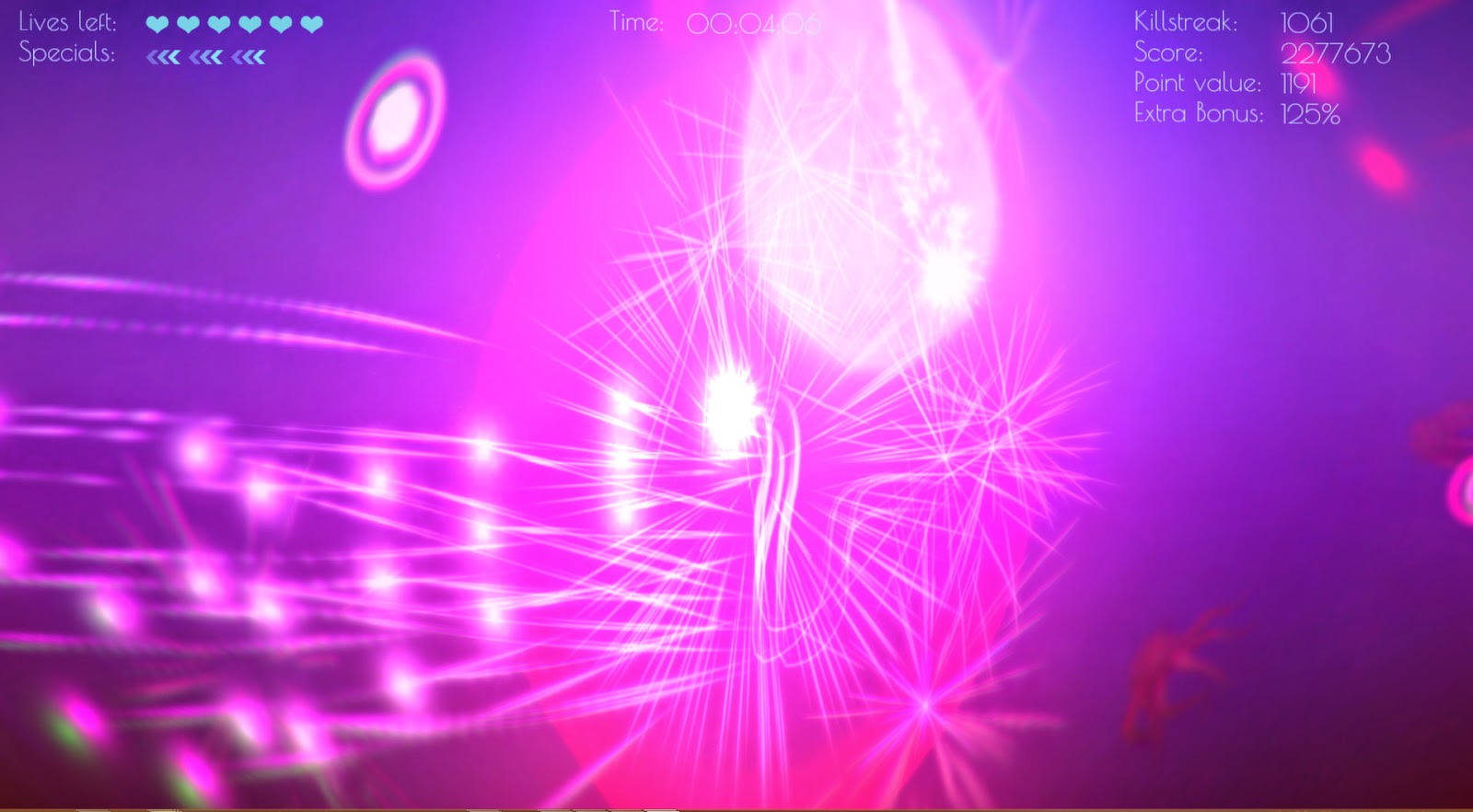 Pulstar is difficult, brutally difficult. Though the game is extremely hard to play it is one of the more rewarding experiences I have experienced with twin-stick shooters. Some are hard just to be hard where Pulstar is hard, yes, but anyone can pick up and play the game (my daughter can last about 3 minutes in game, which is saying something since she is 7 years old) for fast-paced action and some good fun. Each game is ranked globally and after you die (and you will die) you will be ranked based on your score; in most cases I could last about 5 minutes and was consistently ranking globally at about rank 1100, however my best rank was rank 435 and I have to admit that I felt really good after seeing that rank (and subsequently getting an achievement for ranking in the top 500 players). Difficulty not withstanding, Pulstar is fun.

As Pulstar is a pure arcade twin-stick shooter it does not have much of a story; simply a short cut scene as the game opens that explains that there is an attack by some crazy nasty aliens and you are the one that gets to stop them. Outside of that, there is not much story but Pulstar’s action does not need a story as it is both challenging and rewarding. Focusing purely on the action, powerups, and crazy gameplay, Pulstar is a refreshing entry into the twin-stick shooter category that anyone can pick up and play, experience intense action, then laugh when it all comes to an end. For the price (a mere $4.99 at the Steam Store ), rewarding gameplay, and sense of achievement, Pulstar is a must for any twin-stick shooter fan and highly recommended for those gamers like me that do not have as much experience with the genre.