Crimsonland brings back a lot of memories of college for me. It was brand new, then, and it was one of the most addictive games I knew at the time. You had no manual, no complex keybindings, no storyline to speak of. You were a space marine/doomguy/random maniac on a planet’s surface with a pile of weapons and the promise of death behind hundreds of thousands of waves of spiders, zombies, bugs, aliens and other foes that promised to turn you into a tasty afternoon snack. 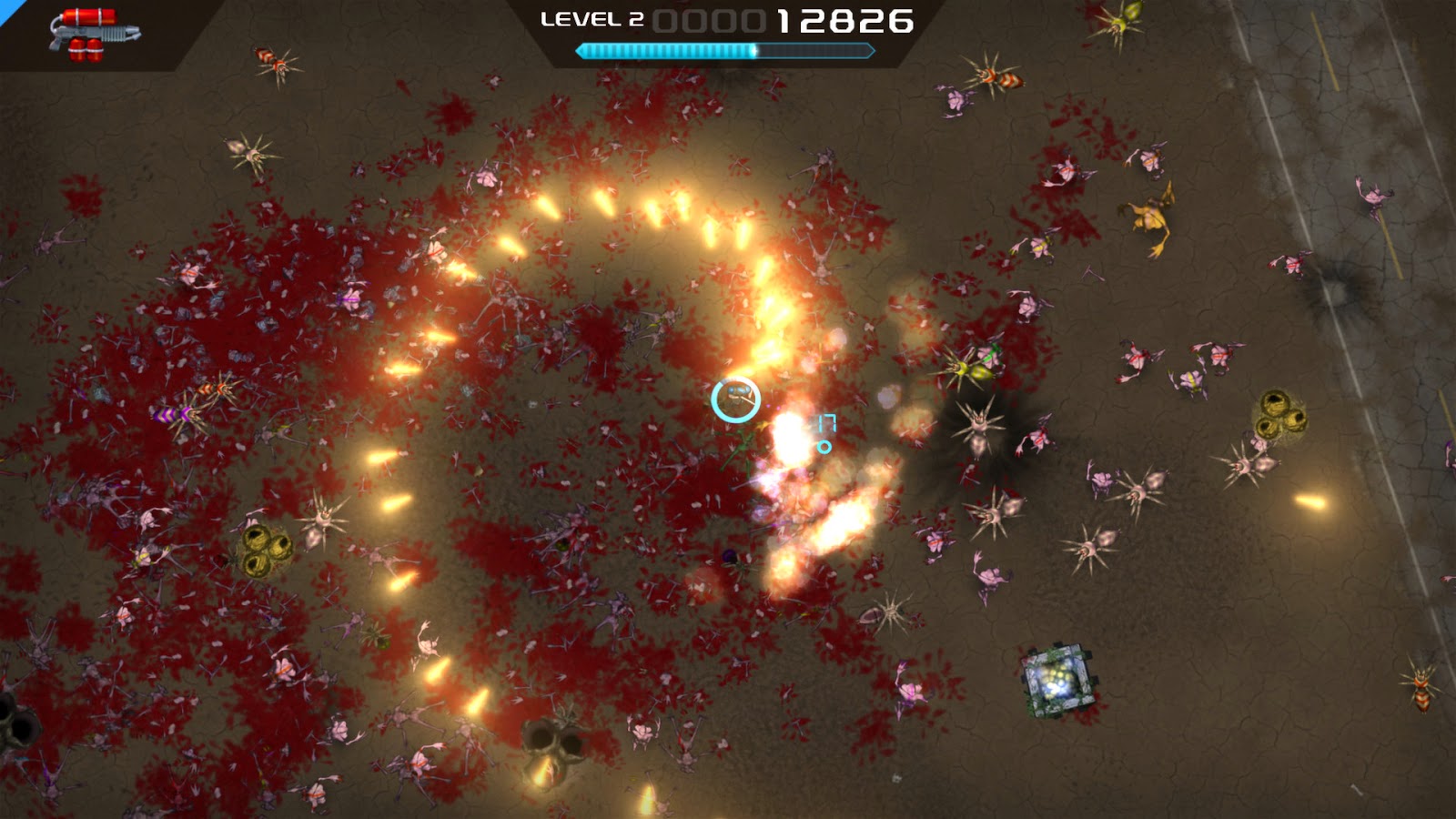 A topdown shooter ported to the modern era, Crimsonland has had a number of the bugs worked out of the proverbial system, while still offering just as many of the gooey critters for you to open fire on in the game itself. There has been mention that this was a graphical enhancement, but to be entirely candid, I just can’t confirm myself.

The graphics still feel the same as they did over a decade ago, and while that might sound like a complaint, you have to keep in mind that I played this game until it had nothing left to offer me back then, so maintaining the status quo is far from a failing. The style of game is more about tactics, judgement, reflex and an unhealthy dose of blind luck more than it is about a visual masterpiece. It would not make sense to spend too much time on the imagery anyhow, as after a minute almost everything is coated in blood.

The gameplay is simple but addictive, and the game does a great job of ramping up the difficulty as you make your way through the missions. Every other level at the most, you unlock a new weapon or perk for use in survival mode. Every perk provides some form of boon to port over to your eventual demise, it they will help you last longer. Weapon pickups are mostly random, and they completely replace your current weapon. What this ends up meaning is that eventually you will get your weapon of choice… The Jackhammer for example, and you no longer have to just avoid enemies, you also have to do your best to also avoid suicide by accidentally picking up that semi-automatic. 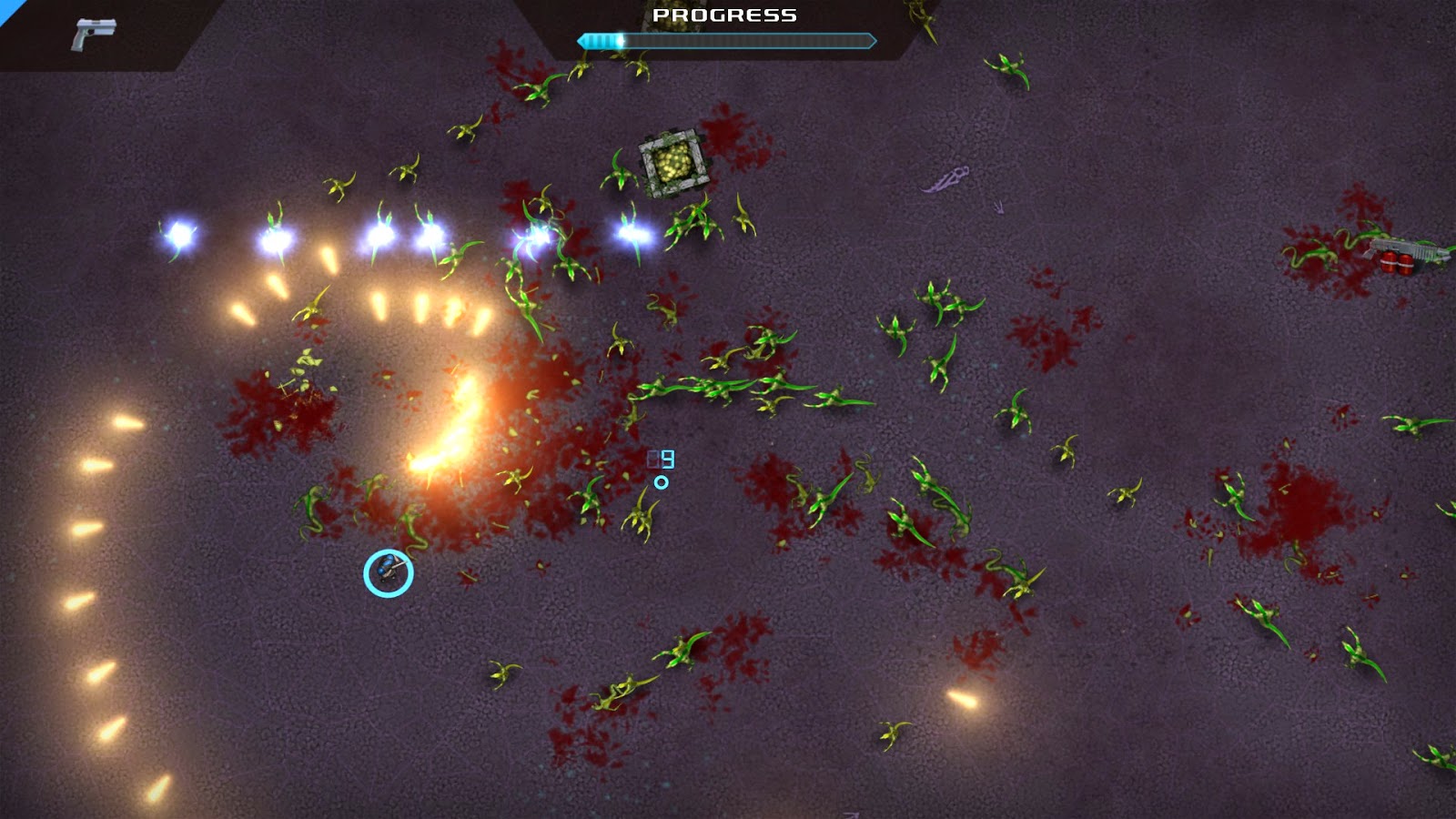 The weapons are all ‘balanced’ in a sense, but they feel balanced in tiers, with all of the high power weapons ending up approximately lateral, but all well and above the mid tier weapons, which are all far superior to weapons like the pistol or the blow torch. When playing survival, I often found myself cheesing the game by restarting the match if the initial weapon drop sacked, because if you start a survival match with the odds stacked against you, you likely aren’t going to be doing anything amazing that round.

Kill enemies, gain experience, swap weapons, level up, pick perks, build momentum, then get overwhelmed and do it all over again. It fails to sound like much fun on paper, but these guys have pulled it off, and in flying colour. If things are getting too hairy, you can always get a friend in on the action using 4 player local coop. No steam or PSN support for multiplayer games, but to be entirely honest, I feel like that is something better in theory than it is in execution. Adding latency to a game where I already live or die based on a split second reaction sounds like an exercise in futility.