While Titanfall was Microsoft’s big game for the Xbox One early on in 2014, probably the biggest push from Sony was focused on InFamous: Second Son. Introducing a whole new cast of characters and some fun new twists, inFamous: Second Son does not veer off of the path blazed by the original games in the series, but it does a good job of taking what worked best in those games and focusing on those elements to create one of the most entertaining action-adventure games to date. 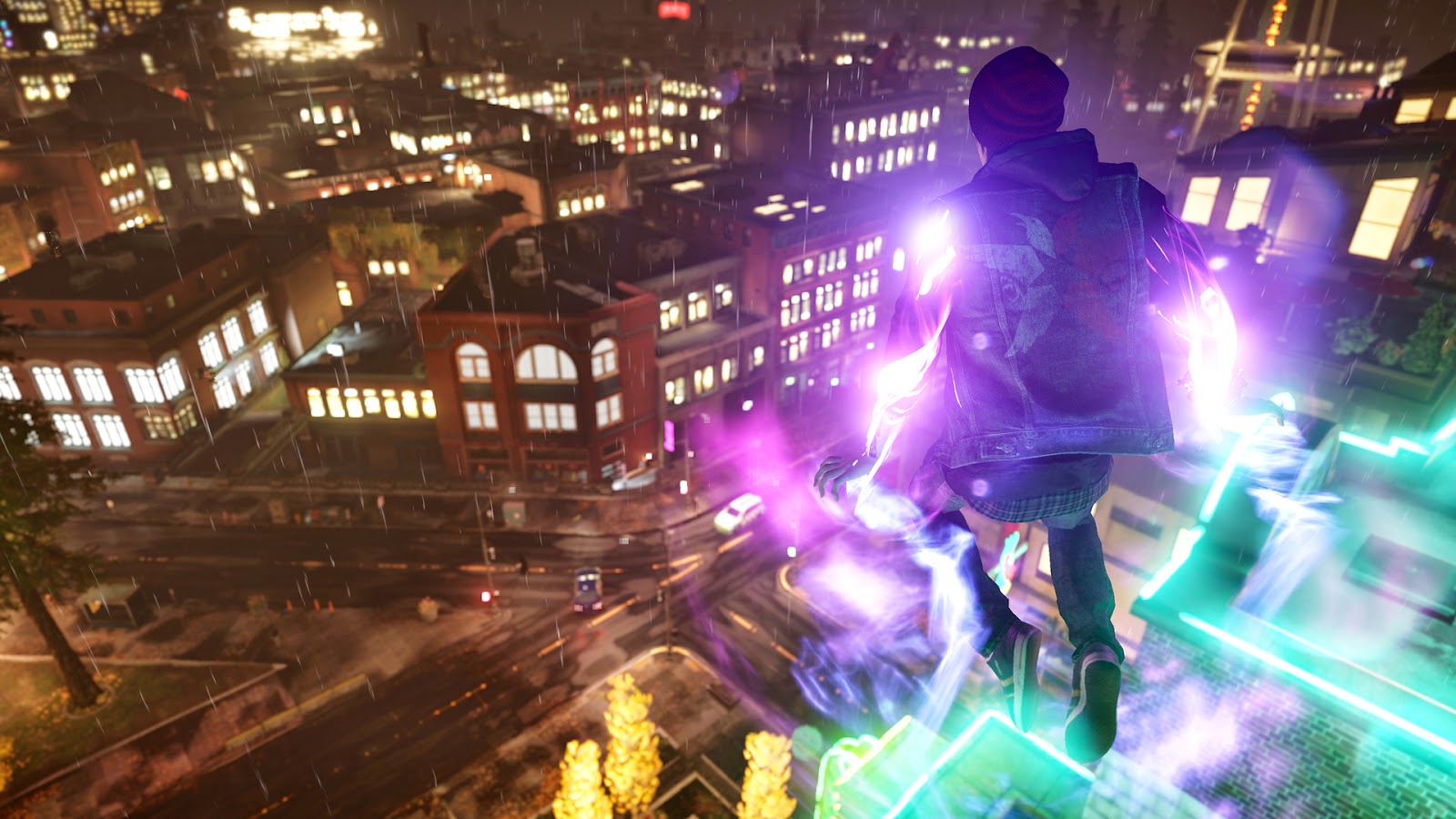 I was a huge fan of the original inFamous game, despite the fact I am not usually drawn to open world titles. Games like Watch Dogs, Red Dead Redemption, GTA and others just fail to draw me in, but something about the super powers I get to wield in the inFamous games helps me to get over all of that as I traverse the cities and steadily complete more and more objectives.

This was exactly the approach I used in Second Son, where I almost always veered off of the main story path to clean out each and every zone as fully as I could (though that did get easier later in the game). By the time I had my final showdown, I had already unlocked everything else there was to do on the map (including the odd but still somewhat entertaining paper trail side quest where you can use a computer and websites to navigate some of the content, which then gets relayed back to your game on the PlayStation 4).

If you have played the earlier inFamous titles, you probably have a good idea of what to expect here. Throughout the game, our protagonist (Delsin) will be faced with choices. Similar to the Mass Effect titles, they tend to be of the ‘good’ or ‘bad’ choice variety, and these impact not only certain scenes but also how the general public reacts to and talks about you over time. It also impacts how Delsin’s powers develop, as some of them have branching options depending on which side of the moral meter he is occupying. 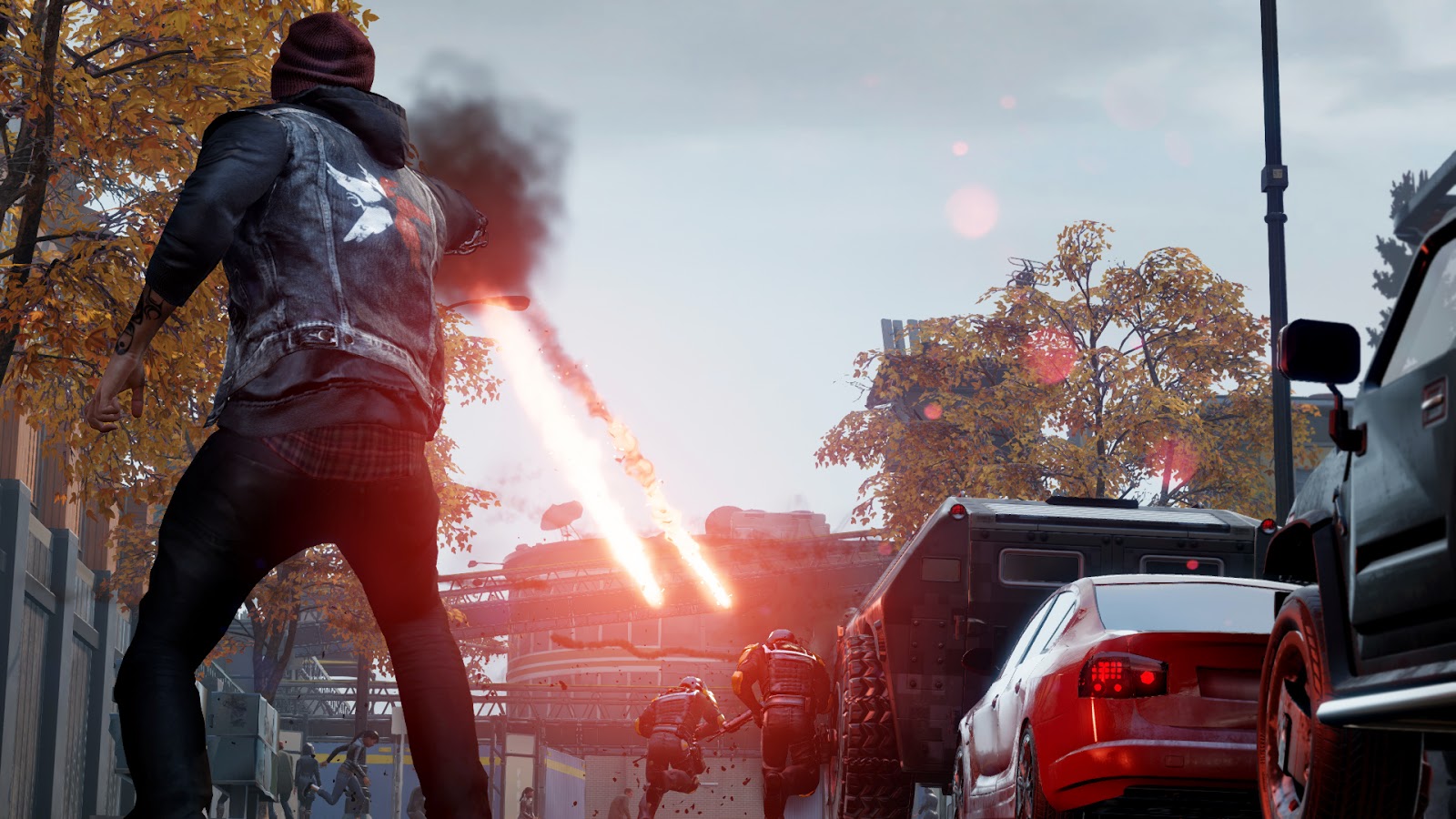 This kind of system almost begs you to play the game twice, just so both sets of events and powers can be seen. It is a good thing that the overall game holds up so well, because giving inFamous: Second Son a follow-up play session is still worthwhile. One major difference between Delsin, and Cole (the protagonist from the first two games) is that while all of Cole’s powers were based on a single element, Delsin’s abilities are more diverse.

Delsin can come into contact with other conduits (people with these unlocked powers) and leach their skills. He starts off with his well-publicized smoke powers near the beginning of the game. These allow him to fire off rockets, add a sort of flaming,smokey flare to his attacks, drift up vents and levitate. Later he gains the power of neon lights, which does not sound like much, but has similar properties. Again there are projectile weapons, the ability to strike enemies harder and to run like a blur (not only more quickly, but right up walls as well).

These powers all have slight differences, but in many ways they are very similar to one another as well. At the end of the day, Delsin gets abilities that allow him to travel more effectively, or to shoot powerful but limited numbers of rockets, to shoot faster but weaker projectiles and so on. Greater variation between the abilities would have been nice. By the time everything was said and done, I was still using neon about ninety percent of the time, simply because it made traveling the huge map easier. 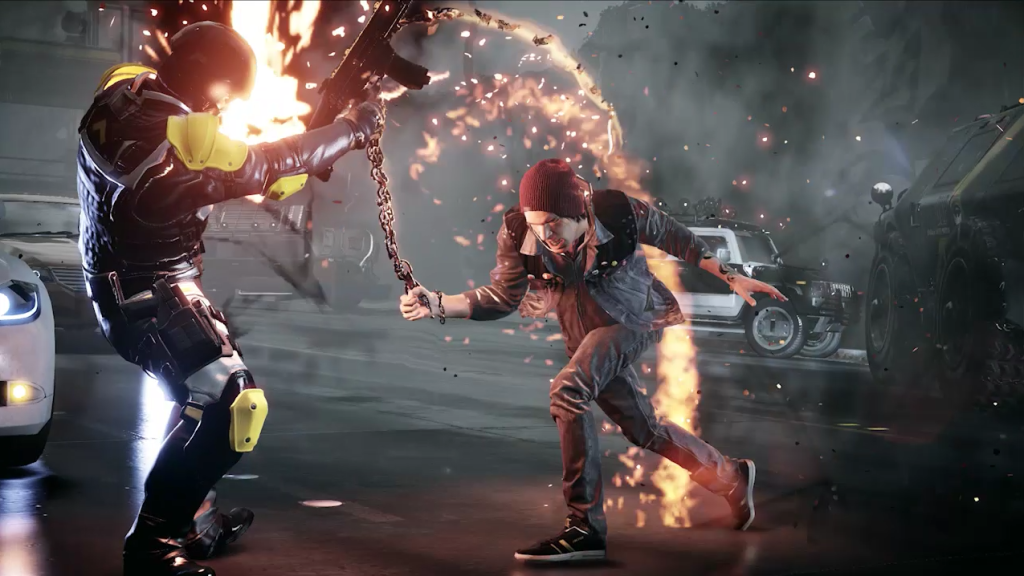 The story itself is okay, but it is helped along by some interesting characters and overall some good voice acting. I found myself more of a fan of Reggie, Delsin’s older and non-powered brother, than Delsin himself, but there was plenty of humor infused in their conversations and many of Delsin’s own monologs along the way. It is a shame that the story itself just never really gripped me the way Cole’s initial outing did.

Visually, Second Son is really impressive. The character models look great, there always seems to be a ton of movement on the screen and the powers are often visually a treat – especially the super attacks. The combat and most of the gameplay works really well also, with fluid controls and more intelligent enemy AI than the previous titles exhibited. If I have a grumble, it is that Delsin’s movements up and along building walls is slow and clumsy at times. This is why I liked the neon ability so much – I could just zip up a building’s wall (most of the time – if the building has an obstacle like a canopy on it, that will stop Delsin’s ascent) and not worry about parkouring from one window frame to another and hoping that Delsin will actually grab the pipe or crack overhead.

Second Son has all of the tools to be the best game in the inFamous series, but it winds up just missing the mark in a lot of ways. A better story and more imaginative variety in powers (as well as how they level up) would have gone a long ways towards making inFamous: Second Son a game of the year contender. Unfortunately it winds up falling short of that status and has to settle for just being a really good game that is a lot of fun to play, but with just enough flaws to keep it from being a perfect experience.