How a game can be so dark and so funny, with a protagonist who feels hopelessly clumsy in a platforming genre that often demands perfection can work so well is something I may never understand. A remake of the classic game from way back in 1997 on the original PlayStation, it is amazing to see how well the core game design has held up after all of these years. 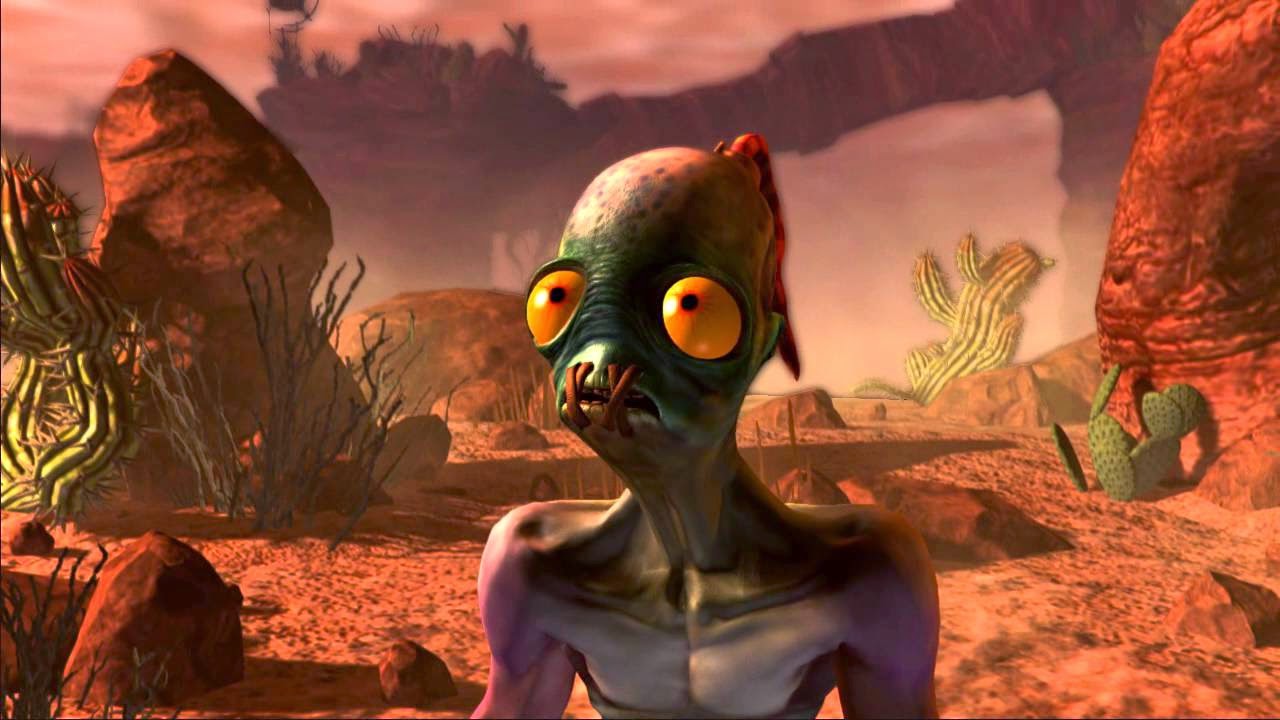 Things kick off with a ridiculously dark premise as the hero of our story, Abe, discovers that the meat factory he is working for is planning to turn his particular race into the next popular snack food for public consumption. Abe now has to save his skin (literally) as he attempts to break out of the labyrinthine facility while trying to free some of his fellows at the same time.

To call New ‘n’ Tasty a platformer is really only half the truth, as puzzle elements also factor in very heavily here. Abe is not a warrior looking to break out via sheer force, nor is he a stealthy ninja no one will ever hear coming. Abe is capable of rigging the environment to his favor as he attempts to sneak about when necessary, but by and large he is quite helpless when compared to his militaristic pursuers. A glancing gunshot here and there will generally fail to stop Abe completely, but he cannot take more than a few bullets before falling over dead, popping up at the (thankfully) frequent checkpoints. 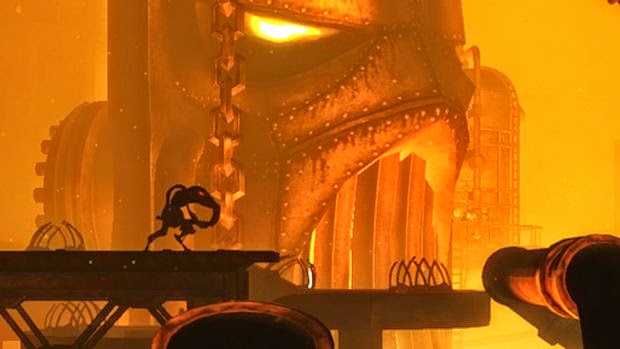 Abe, unable to go toe-to-toe with his enemies instead needs to rely on the environment. This is where the puzzle aspects come in as he manipulates traps like buzz saws, mines on the ground and the opening of trap doors to deal with them. Abe has a few other non-aggressive tricks up his sleeve as well as he can attempt to sneak past sleeping guards and also to crouch behind items in the environment.

The platforming elements work, but they were a bit rough for me. To begin with, platforming titles are not my absolute favorite, but Abe is something of a bumbling, accidental hero. Let him run too far too fast, and he will bounce off of a wall and fall flat onto his back. Walk up to a ledge and he pin wheels his arms comically. His jump is more of a bunny hop unless you get a running start, and when Abe is running, he is unwieldy. I am used to games that focus heavily on platforming elements having really crisp, responsive mechanics like Super Meat Boy.

Thankfully these platforming elements are just part of the package and not all of it, because Abe’s bumbling ways would have gotten on my nerves a bit more otherwise. He just feels imprecise at times, wobbling about while having to make a series of jumps onto relatively small spaces while things are falling at Abe from above. Those were the game’s most frustrating moments. 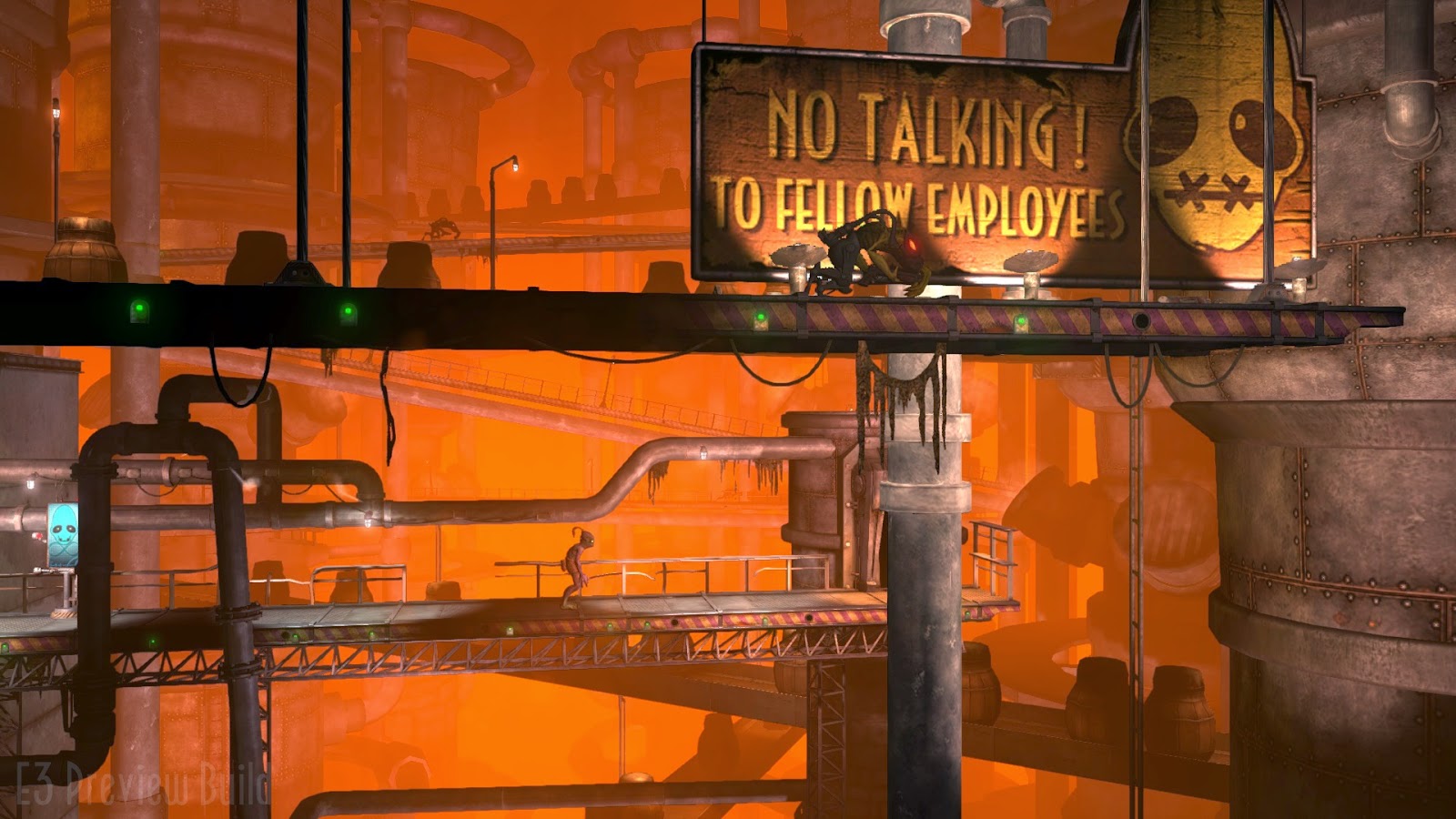 Yet despite those frustrating moments, there is a sense of satisfaction from knocking off enemies with the environment and figuring out what has to be done to help Abe further advance through the level. On top of the level design, which has aged so incredibly well since the original game, the updated presentation values are absolutely top-notch. The graphics are outstanding, with beautiful colors and inventive use of depth in the levels, while the audio holds up quite nicely both from the sound effects as well as the music in the background as well.

Abe has a sort of dark charm to his adventure, and it plays out right from the beginning. One of my favorite scenes that best illustrates this occurs in the game’s opening level where Abe first learns to use the trapdoor to send enemies plummeting to their death. Said enemy is standing in front of a board that shows how many employees there are, how many casualties have occurred on the job site and how many people have escaped the plant. Those last two numbers are at zero – until Abe opens up the trapdoor. Suddenly casualties dings to a value of one. Little touches like this go a long ways with making Abe’s journey a guilty pleasure worth playing.