Boasting procedurally generated levels, RPG-like leveling elements, crafting, and a sense of humor, Pixel Boy and the Ever Expanding Dungeon is very difficult to explain. Fans of Hotline Miami will likely be on-board with Pixel Boy, however, the game is far more accessible to a larger age group due to Hotline Miami’s obvious adult overtones. A top-down semi-twin stick shooter action RPG with psychedelic colors and lighting and an electronica soundtrack, Pixel Boy fits into a genre of its own. Giant Box Games is taking and building on some of the most addicting styles of gameplay, and mashing in not only terrible puns, but about every other gaming fad from the last few years (which is not a bad thing). I think that the biggest question, though, is … does it work? 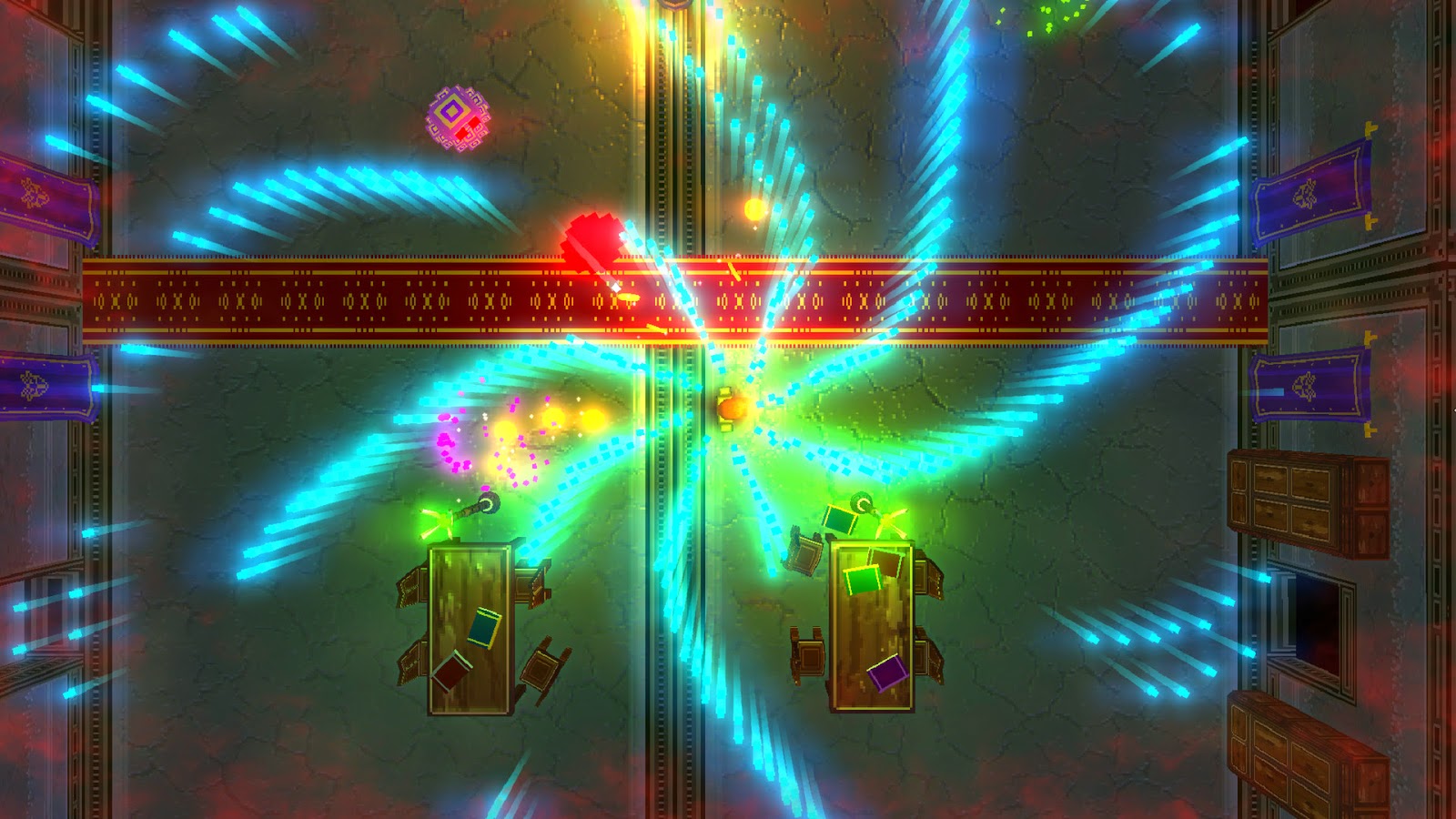 From a graphical level, Pixel Boy is both a significant cut above Hotline Miami ( and most other top-down shooters ) and unique in the fact that it has graphics that are straight out of MineCraft. THe chunky, blocky appearance of the levels and environmental doodads to the square-headed Pixel boy, the art style is actually quite endearing. As you come across new enemies and fight your epic boss battles (of which there are four, one for each act of the game), you will be introduced to newer more fanciful enemies that, while simple, are quite neat looking. But where Pixel Boy really shines is in the lighting department; each weapon type that you can get glows in a bright neon color, as do enemies, and when something explodes or dies, big bright neon puffs appear.

I could not help be make a comparison to those neon glow sticks that you are warned against opening, and that old Lite-Brite toy. At first I was not very impressed with the graphical style that Pixel Boy uses, but as I continued to play I became more attached to it almost solely due to the fantastic glow-y affect that is use. Even now, when I am not playing, I can not help but think about the game as a whole without being more and more impressed by the style that was used.

Past reviews of mine show that I find the aural aspects of a game to be some of the most important parts of a game; excellent audio can make even the worst game far more appealing and bad audio can bring even the best game to its knees. With Pixel Boy, Giant Box Games had the soundtrack put together by the renowned French artist,  Pyramid, something of a prodigy and star in electronica and ‘dance hall’ music. While I cannot deny that the music is good in Pixel Boy, it is far from my cup of tea. Personal tastes aside, the music fits Pixel Boy and the Ever Expanding Dungeon’s ascetic like a glove. 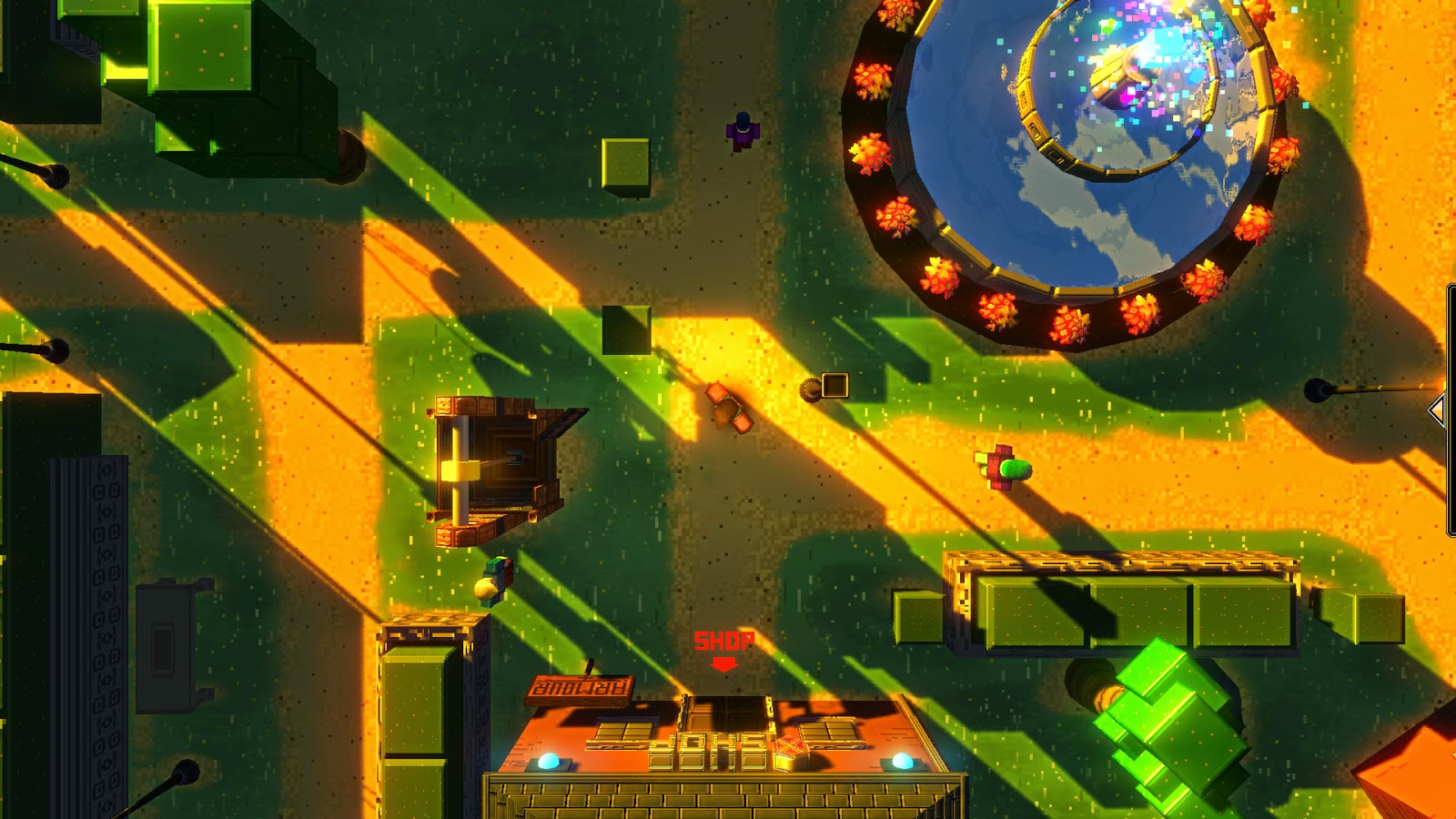 The bright neon lighting, the boxy graphics and near 16-bit textures match the music so well that really, seeing a Pixel Boy stand-up arcade cabinet next to the likes of Galaga, Tron, or Arkanoid, would not be out of place. Ambient sounds have been toned down in favor of the goofy bops and pew-pews that perfectly compliment Pyramid’s soundtrack, so you will not find any creaking, dungeon-y sounds, which is fine, as those sound bits do not really belong in this style of game. While I am not a fan of the style of music, I have to admit that the music certainly helps the overall experience and I do not believe I would be nearly as fond of Pixel Boy as I am without the soundtrack.

One of the most alluring features of Pixel Boy and the Ever Expanding Dungeon is the replayability of the game. Ever single time you start a level, the layout will be different which will affect the way that you play a level. When you can load up a game and your experience is different every single time then, in my book, that is a good thing. With the crafting, the procedurally generated levels, and some of the best lighting in a top-gown game, Pixel Boy was one of the most surprising games I have had the good luck to review this year. I am generally not a fan of top-down style gameplay, I played Hotline Miami for all of 3 minutes before I was so disgusted with the controls that I could not play any more, after that the whole top-down genre was fairly ruined for me (especially since Hotline Miami’s success has / will influence developers looking into the genre). 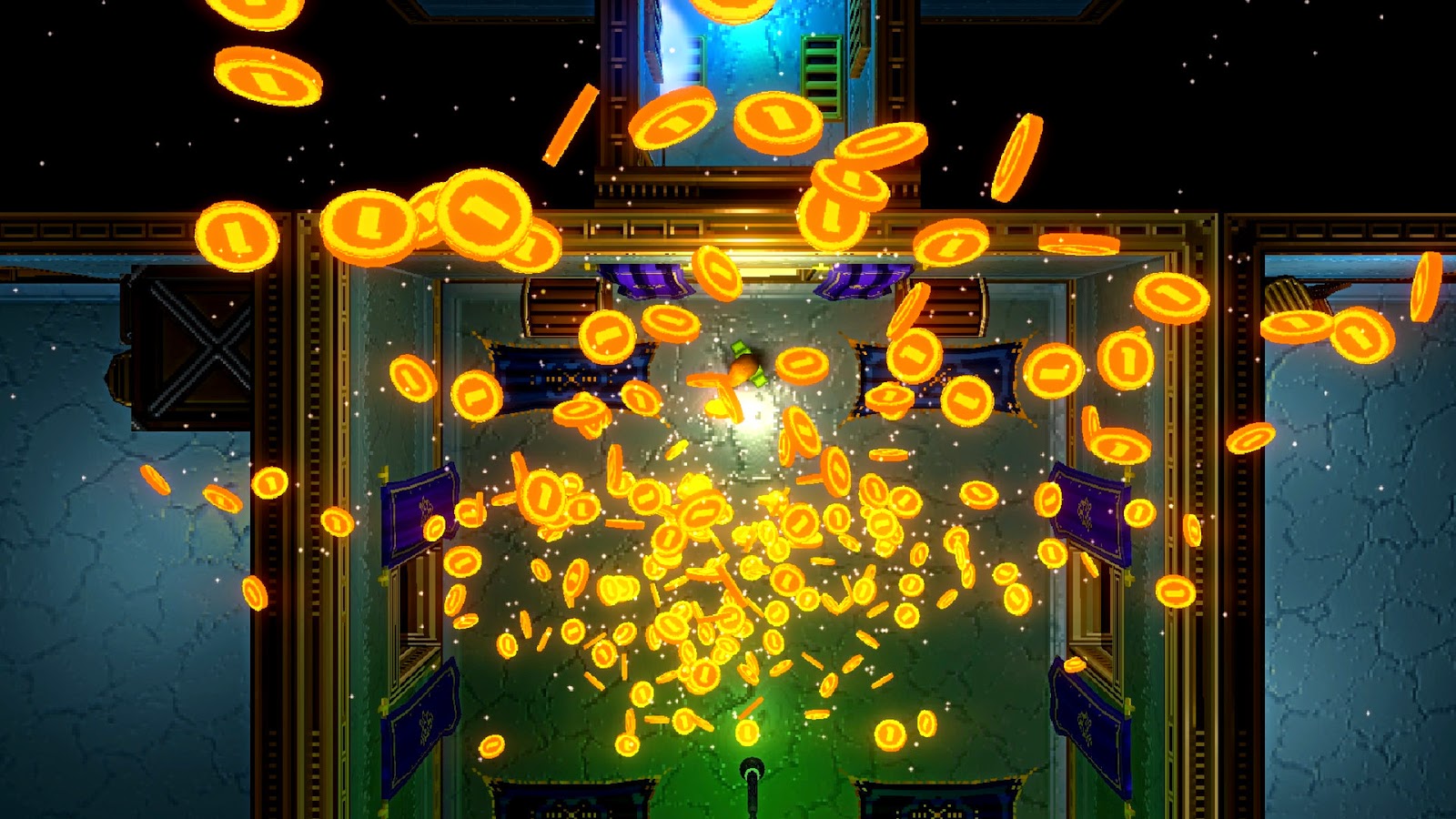 Where Hotline Miami’s controls were atrocious, using a keyboard and mouse in Pixel Boy was awkward and far from efficient, but they were better, though I still craved a gamepad. However, I was mortified to see that gamepad  support was not built into the game. This is a top-down shooter along the veins of a twin-stick shooter and you do not launch the game with gamepad support? This is a massive loss for the game and using a keyboard and mouse was awkward to say the least. Looking at Giant Box Games’ website does bring a bit of relief as they are looking to add it down the road, but come on …

Amidst the huge letdown that gamepad support was not included in the initial loss, other features are on the way to being released, such as a daily dungeon where a procedurally created dungeon is released for the day by the developers, as well as the ability to play as a Pixel Girl instead of just Pixel Boy, along with more voice acting. They are all very nice features that would work great as a way to keep fans interested and I know I am very keen to see gamepad support as well as the Daily Dungeons. When you add in the future potential to the existing package, Pixel Boy and the Ever Expanding Dungeon is a well rounded top-down procedurally generated shooter with RPG elements and some wicked awesome lighting and, for the right price, could be a welcome addition to any gamers’ library.