Q*bert was one of those titles that I adored when I was a kid. Way back before Link was traveling Hyrule and Mario was stomping Gumbas, we had Q*bert doing his best to avoid a cast of colorful enemy characters while navigating a series of cube-shaped platforms. The formula was simple, addictive and a lot of fun. Still, with all of the different games that have gotten the remake treatment over the last few years, most of those titles leaned toward much newer titles than this. I had my doubts that Q*bert would have enough substance to make the effort to relaunch the little guy worth the effort. I am very happy to have been proven wrong. 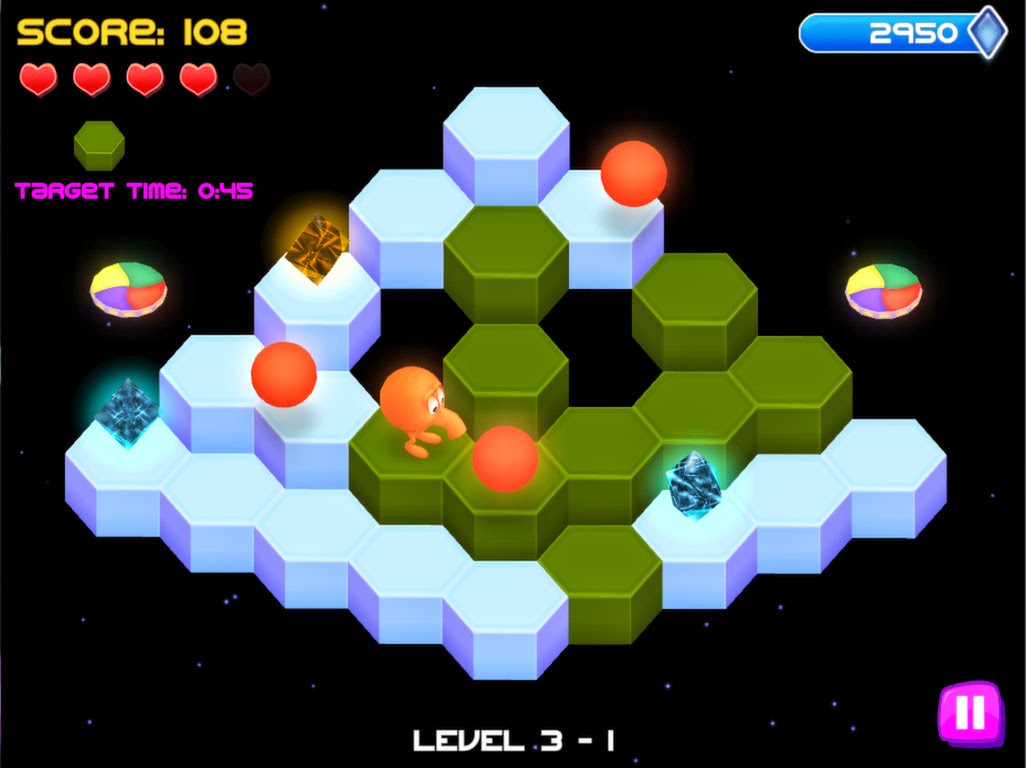 A host of new features come with the improved coat of paint. New playable characters (Q*zilla? Really? Sweet! Really these are just glorified unlockable costumes – they do not impact how the game plays, but they are fun all the same), new enemies, Steam achievements, being able replay any previously beaten level and a pair of different modes take this classic game and breathes some pretty substantial new life into it.

The first of the modes is simply the classic game in 2D form. This is the original game just as you would expect, guiding Q*bert through different sets of isometric blocks to change their colors by hopping on them, all the while avoiding his old enemies such as Coily Slick and Sam. When I heard that there was mouse control, I found myself immediately wondering how that would work. For all of the adoration Q*bert earned in the arcades years ago, his controls were always a little odd due to the angle of the levels. Here you simply use the mouse to click on the desired adjacent block, and Q*bert bounds off toward it. I was surprised at how effective this mode of control is. I do not know if it is quite as quick as using a joystick, but it is undoubtedly more accurate. It has a sort of ‘mobile device’ feel that probably lends itself to tapping a screen, but it still works well here. 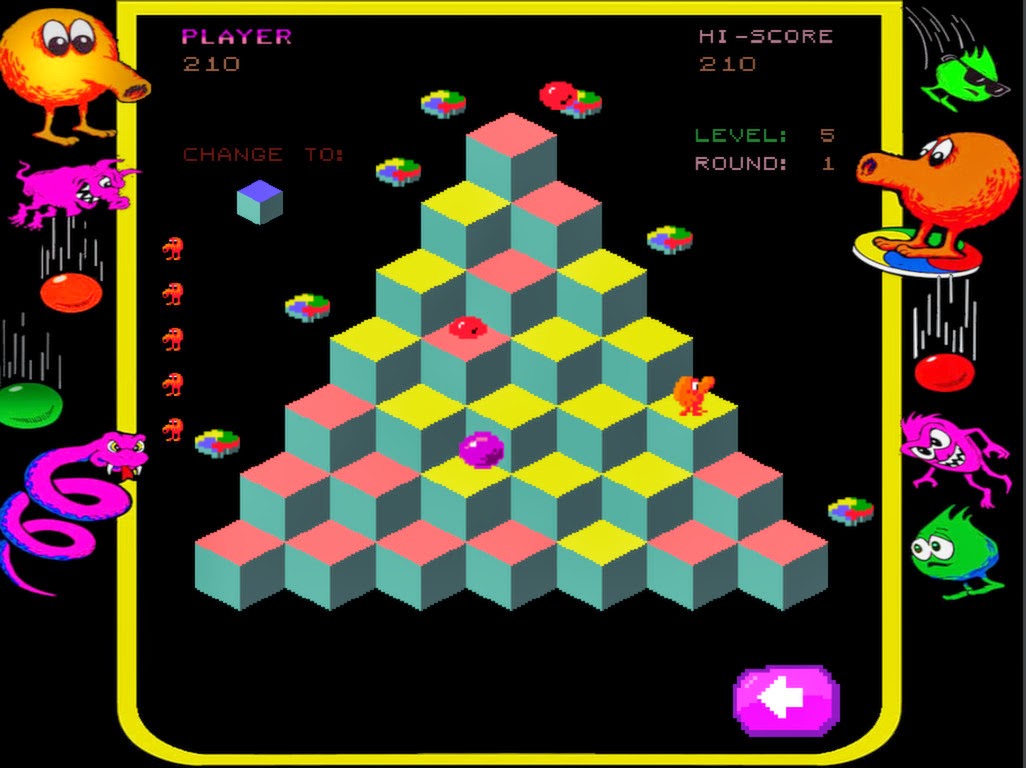 While that blast from the past is certainly welcome, most people are probably curious what the Rebooted version of the game is all about. The most notable distance is that the cubes of old are replaced with hexagons. Suddenly the chained patters have more variety and movement options from one space to another go from four to six. This has a knack for making enemies a bit easier to avoid, as they have a more difficult time in cornering Q*bert, but the development team deserves a lot of credit for using this new found flexibility to create some absolutely fiendish level layouts.

Perhaps my biggest complaint about Rebooted is the point system used for unlocking more levels (similar to the medals earned in Trials Fusion for example). The result is that early on levels are fairly easy to unlock, but later on it can be something of a chore to try and attain new levels. This system feels slightly more flawed however, because in Trials Fusion a single great run unlocks all of the medals or points that stage has to offer. 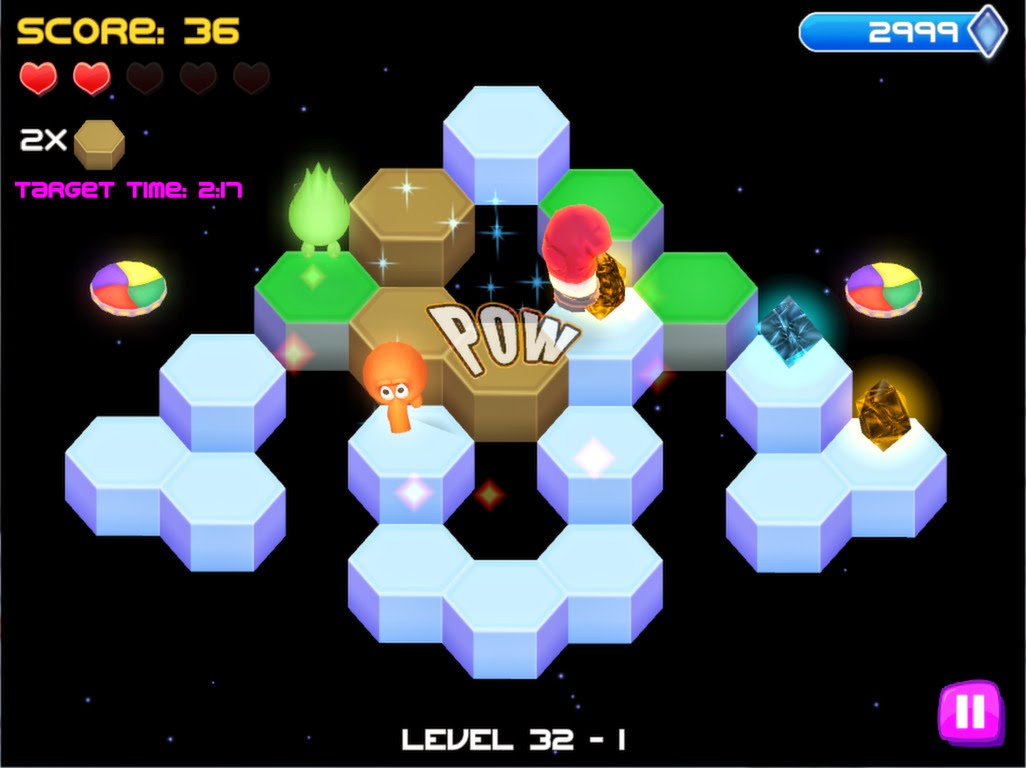 Here the points are earned for three separate types of tasks: beating a specific score, completing the level within a specific time and for completing the level itself. The thing is, each object is earned independent of one another. That means playing the levels three times each to earn the maximum points for each stage. Luckily levels usually play out quickly, but if you find a particularly troublesome or annoying one, it can be a hassle to have to attempt it multiple times, even after you have beaten it, just because future content is otherwise locked away.

The updated visuals and music are certainly pleasant enough in the rebooted mode, but would a bit more variety in the soundtrack have killed anyone? Still, for a game that rings in at just under five dollars, there is plenty of value to be had if you are a fan of old Q*bert.