Sweet Lily Dreams, by RosePortal Games, is an epic RPG with a cute art style that follows the young girl Lily through an adventure that will take you to the Realm of Dreams. You will experience a number of mature overtones and morals while finding yourself at the center of the battle between good and evil; join your friend Faith and Curly Trick ( a dog and cat respectively ) on their quest and encounter literary antagonists such as Dracula and The Headless Horseman. While Sweet Lily Dreams looks to be made in the vein of classic JRPGs like Final Fantasy and Chrono Trigger, it is so much more than either of them. 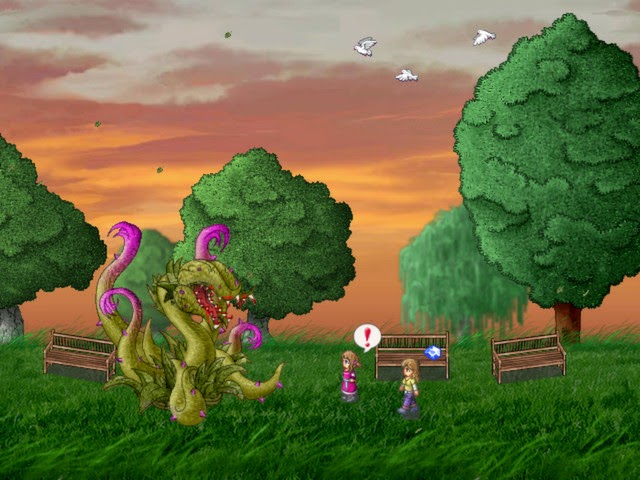 While you are traversing the Realm of Dreams, a world of classic tales,
famous folklore, in the dream-like world you will be able to craft not
only your own magic and items of power, but even the furniture that you
will use to build and furnish your own player housing. Taking a number
of cues from massively successful RPG franchises such as The Elder
Scrolls and Final Fantasy, Sweet Lily Dreams is a collection of modern
day feature packed into the beautifully crafted sprite-based art of
classic role-playing games.

The opening sequence of Sweet Lily Dreams really resonated with me as both a gamer and a father; it opens up with Lily being tucked into bed by her mother and the young girl wants her daddy who is unfortunately gone and will “be back later.” It really struck a cord with me as I have my own young daughter and the way the opening sequence plays out is both touching and grounding. With just a few lines of dialog, RoePortal Games made me think o my life as a father and the shortcomings that I may feel that I have. It was a splendid experience and when I look back on it I can see that it certainly set the mood and my level of attachment to Sweet Lily Dreams.

Now whether the opening would have the same effect on gamers that are not parents, I do not know, but it is hard to start a new game up and not feel something; it just may not have the impact for you that it did for me. I feel that because of the touching, the time I spent with Lily, Faith, and Curly Trick was far more intimate and, on more than one occasion, I felt as if I really knew or understood Lily and the challenges that she faced. It is certainly a powerful game when it can tug on the heartstrings and pull you in closer to the characters. 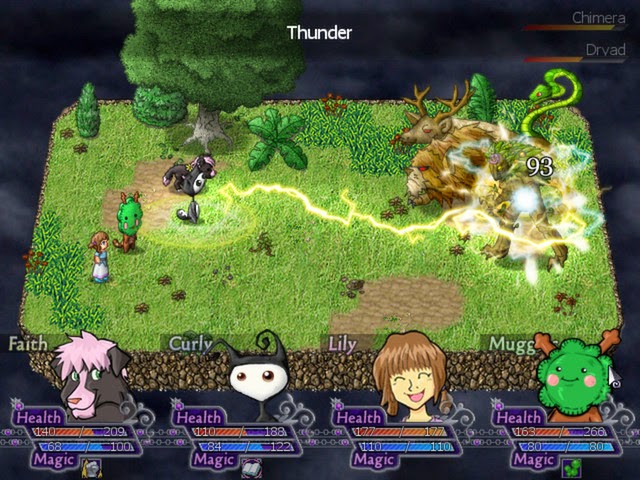 The art style that was used in Sweet Lily Dreams is far more “cutesy” than your average JRPG title these days and it is not the same “cutesy” as the lovable Earthbound, but something rather unique. Most try to have a mature, darker, and more high-fantasy feel to them, generally blending science fiction in with fantasy with a sort of bizarre marriage between the two types. Rather than the darker or more traditional styles, Sweet Lily Dreams opts in for more of an art style that you could find in any children’s fairy tale or cartoon.

At the beginning of the game you can outfit Lily in a handful of dresses or clothing ranging from a flowery princess-style dress to  the type of garb I would expect to see Little Red Riding Hood wear; it adds a certain childish element that is both endearing and captivating. Character designs and art are pretty top notch as well, following that same motif of a children’s fantasy character come to life in a nightmare of a world. Weapon effects and spells all have clean effects that are both whimsical and destructive and fit right in with the overall aesthetic so there are no jarring breaks from the gameplay. As you continue on along Lily’s adventure your world will continue to grow and morph into an epic tale with some very dark and mature overtones. 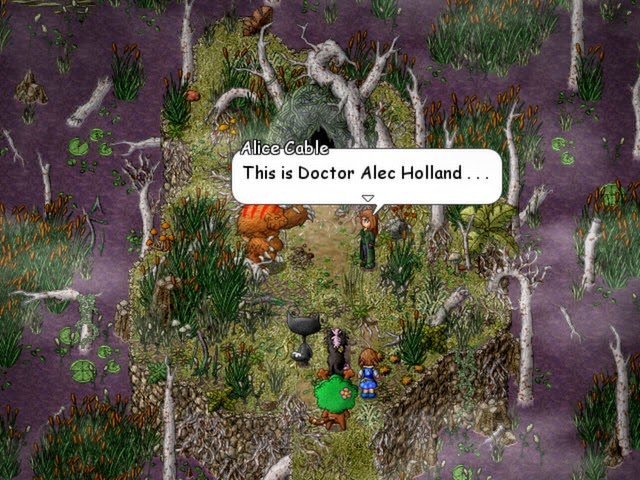 While the music in Sweet Lily Dreams is fantastic, the sound effects and lack of solid ambient audio take a step back when looking at the overall production quality. Sweeping scores and fantastical rhythms are awkwardly paired with hollow and weak sound effects. I spent  near fifteen minutes adjusting the equalizer for my headset in order to get some range to the sound effects and when I managed to get it just right it seemed to work just fine. It is not that the sour effects are bad, not at all, there are no popping, hissing, echoes or static whatsoever; the sounds are just not nearly as high quality (meaning they do not have the depth and range) as the music. With Sweet Lily Dreams you have an amazing art style and a phenomenal score, sound effects and sound bits should match the quality of the rest of the game and here they just don’t. The music though, tied with the high quality of the art more than make up for the shortcomings of the sound effects.

Sweet Lily Dreams offers a rare experience when compared to recent Indie JRPG releases. From the very get go your sense of self is heightened and you are pulled along this sweet little girl’s dreams, riding her roller coaster of a nightmare and learning of some of the more prolific lessons of life. The further along into Sweet Lily Dream I got the more invested I became in Lily’s character. With a touching narrative and the addition of features like a robust crafting system and the ability to furnish your own home, Sweet Lily Dream is a must-have for any role-playing game enthusiast.