comments Share
You are reading
The Forest – PC Preview

The Forest is a game which is available via Early Access on Steam, and as such one should keep in mind that this is an alpha preview. The developers clearly have some great ideas in the mix for this survival/horror game, and so far it is fun to play, but some of that fun is mitigated by the early bugs and difficulty spikes that tend to exist in a game in such an early stage. The Forest does an excellent job of building suspense and creating a terrific sense of atmosphere, and is going to be worth keeping an eye on going forward. 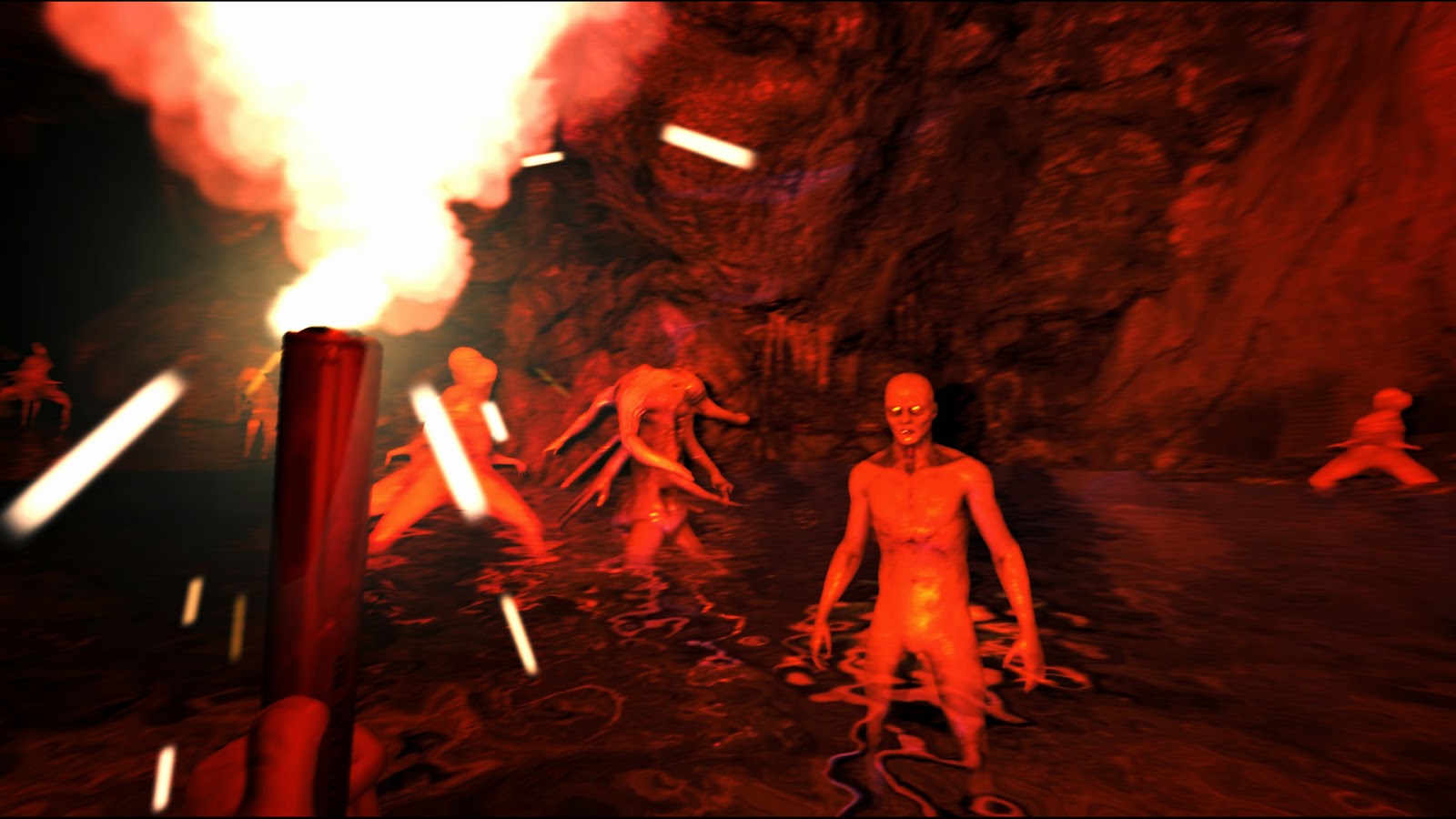 The Forest is is a survival/horror title as the description would indicate, but it has much more in common with a title like Don’t Starve or Minecraft than more action-oriented titles like the older Resident Evil games. It is worth noting that while there are several elements that try to create tension, the single greatest threat at this stage in the game’s development are the cannibals that live on the island.

You being your adventure after landing on this island after the plane you are on crash lands. In the beginning sequence after you awake, you see one of the cannibals take your son, who is either dead or passed out, from the plane. Right off of the bat, there is some narrative driving your actions, which is a distinct departure from games like Don’t Starve which make it solely about survival, but here you have another objective or concern beyond just making it through a night. When your character awakens, he is still on the plane. Before venturing off into the wild, you will want to do some quick gathering of supplies from the plane because items such as food or medications as well as some basic supplies that can be used for crafting later. Once you are off of the plane, your character is left to wander wherever you choose.

Food will be more scarce, and while that is a common source of tension in a survival title (I mean, consider the title of Don’t Starve), you also need to wash yourself off and find shelter. Being unwashed is actually a health concern here. However, there is an abundance of resources which can be used in a variety of ways. One example after a few games was that your character can take lizard skin and use it as a very weak armor. The one consistent obstacle you will be spending a lot of time dealing with are the cannibals, and tis is where The Forest can become frustrating. There are three different ways in which you will encounter them trust me, they are all going to happen at some point. 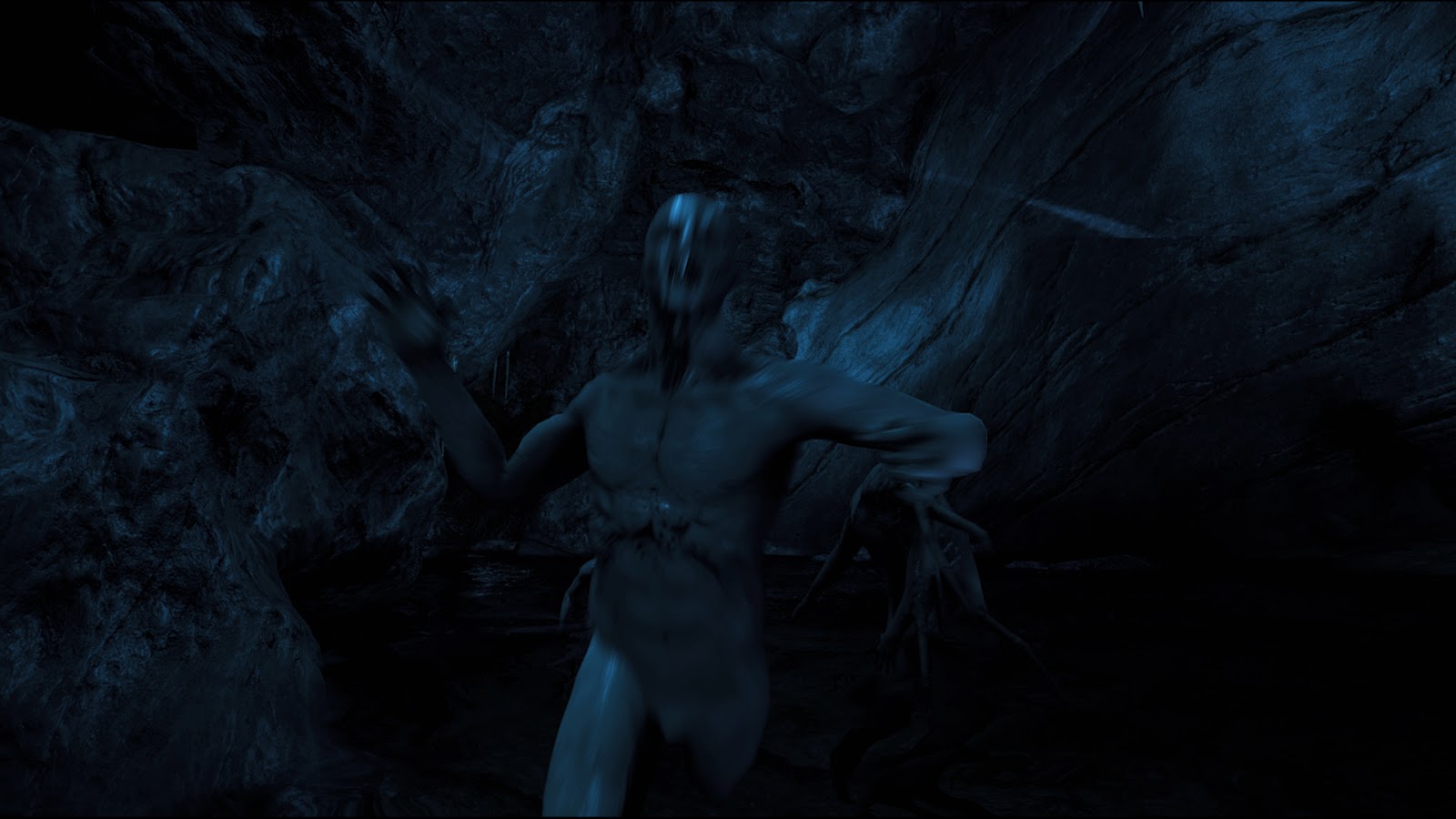 Scenario one: you’ll see them from afar, either patrolling or doing something at their camps. This one is a bit nervy, but you can keep an eye on them and circle around to avoid them. Scenario two: they’ll find you, and you will want to run run away. The third scenario: this one often starts a little differently as a group of them will show up and stand around watching you for a time. Maybe one will sometimes take a shot at you in passing, but the others stand around and wait. Unless of course, you initiate an attack – then the whole group comes after you. Then you revert to scenario two and run. Without any armor, you are going to die in about a half dozen hits. If you do stand your ground and manage kill one, there’s a chance that the rest of the group will run off, but it is far from a sure thing.

I have a few problems with the cannibals as they are currently constructed. For one, they are much too strong considering they are nearly naked and using their bare hands, and yet they can kill you in about the same number of hits as it would take you to kill one with an axe. Sometimes, they can kill you more quickly than you can when properly armed. Also, the frequency of the cannibals really hurts the flow of the game. They appear far too often, and are so dense upon the island that it is almost impossible to get anything done before they show up and pummel you to death.

Granted, there is a peaceful mode, but currently it is difficult to access, with it only available if you type in “Veganmode” at the title screen. However, my suggestion for the cannibals is either making them weaker – especially during earlier stages of the game by altering either their attack power or health (or perhaps both) or making them far less likely to spawn as they are almost always around before you can gain any real momentum. Or both. I would be okay with both options. One thing to note is that while I am not 100% on what Effigies are for, they seem to make the cannibals much more aggressive. I cannot state this claim for certain and there is no real information about them available at this point, but I remember that in my last game, I had made a few effigies, the arms one and two- headed ones, and then about a day after having made those, a horde of cannibals (at least 6 or 7, probably more) came at me at once and they absolutely destroyed me. 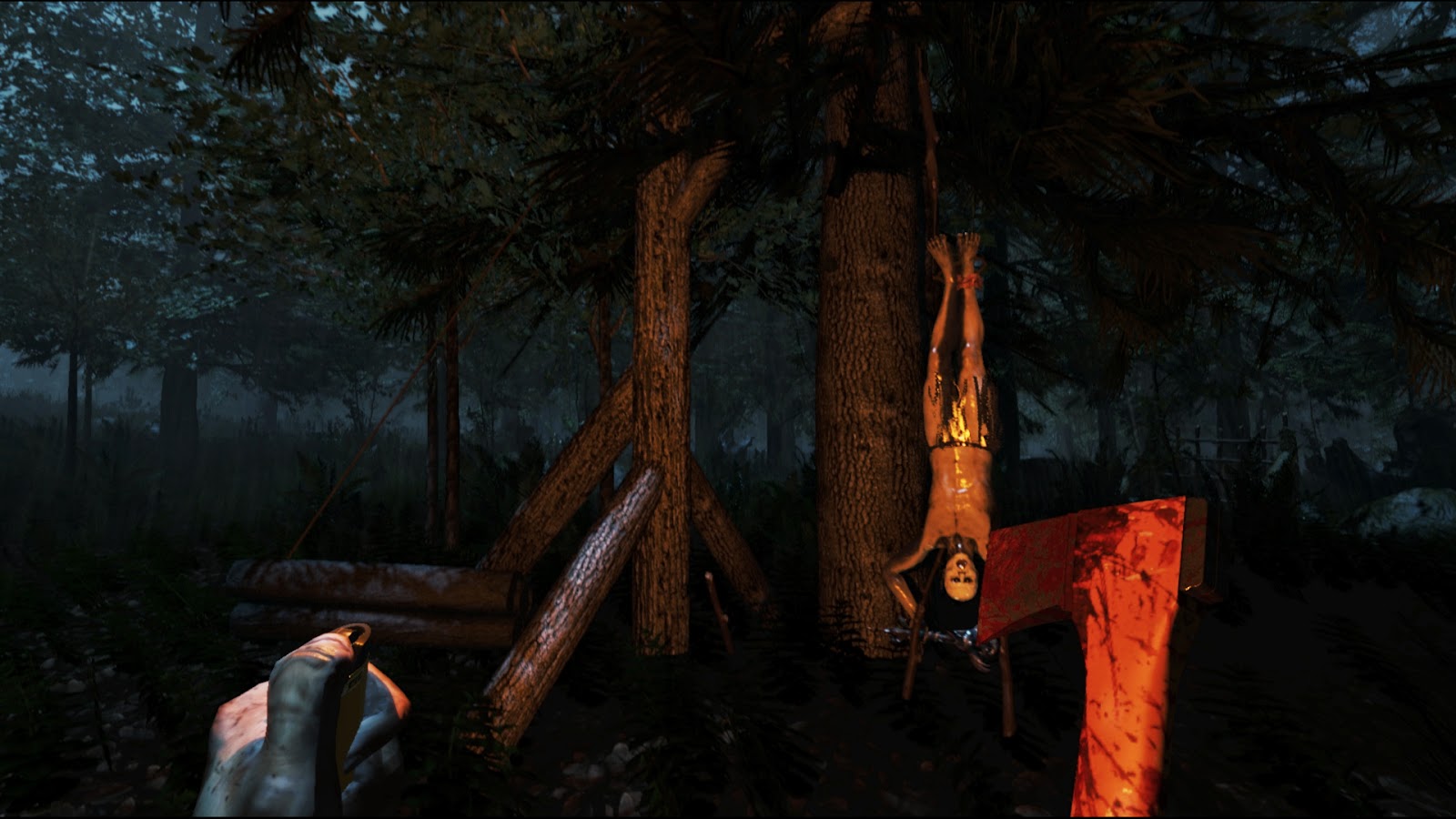 When you die, you end up going to a cave filled with cannibals. It’s very dark and hard to navigate, and I assume this is supposed to be the main shelter for the cannibals. It’s a nice idea, because my guess is that if you get out of it alive, you can head back to your home. Because of the nature of it, you will have an opportunity to collect a good number of decent items from it, but I haven’t once made it out alive. The first time I attempted it, I walked about with my constantly dying lighter, and wound up being attacked by two cannibals after a good ten plus minutes of wandering exploration. Another time I died pretty much instantly. I am not making this up – I turned on my lighter a group of cannibals attacked me before I could get a chance to do anything else, almost the moment I spawned. Most other times I’ve decided to just start a new game or fire up a prior save, because at this point it is far too annoying to wander aimlessly around the cavern just to get slaughtered anyway.

The crafting system for the most part is pretty good and one of the highlights of the game. To craft any ‘buildings’, you first have to select it from your survival book and then you have to choose where you would like to place it. The final part is then bringing the required crafting materials to that location, and finishing it. To craft in the inventory, you put two different items into the crafting spot, by right-clicking them, and then use the gear icon and it’s crafted! You then right-click it again to remove it from the crafting slot and into your inventory.

So now that you have a good idea how the game plays in its current state, I wanted to talk a bit about how it is presented. The graphics are generally excellent, with high quality textures and lighting effects. If you are wet, you can tell easily with a realistic gleam on your skin. The environments do not quite yet have that level of polish, and there are places where unfinished textures exist, but you can see where they are going with it at this stage and it looks promising. 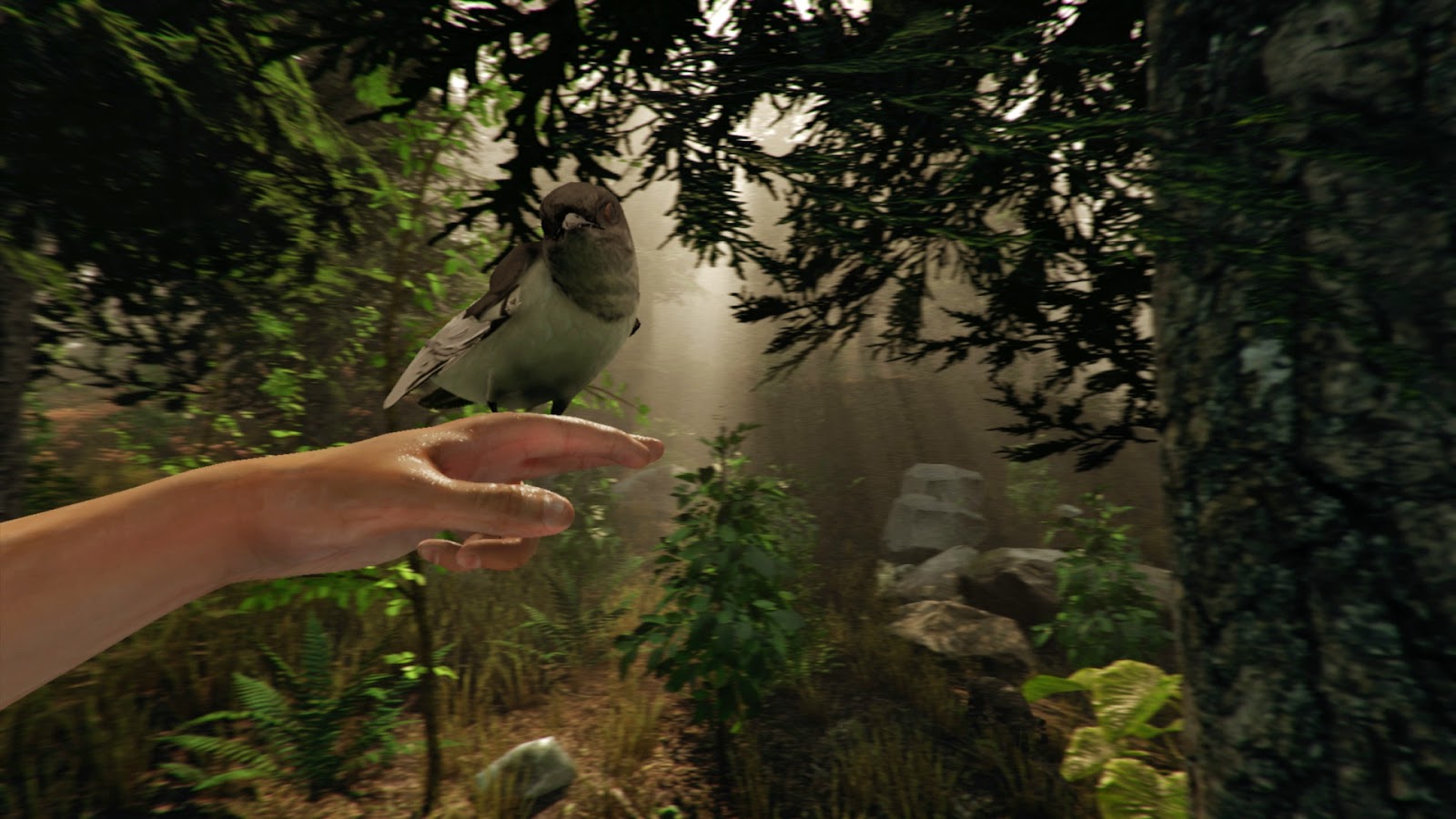 I was a bit disappointed by the sound, which has the ability to make or break a game like this where the environment and tone of the game attempt to build higher levels of suspense. Perhaps at this point, sounds are mostly comprised of placeholders. I hope so as they were nothing particularly memorable and audio design is one of the best ways to make a horror game really stand out – and is actually considered by many one of the most important aspects of the presentation.

All in all, there is a ton of potential in The Forest to create a creepy, atmospheric survival experience. That being said, some tweaks to the cannibals would help make the experience more about tension than frustration. There are edges here in need of polishing, but The Forest could turn out to be one of the better games released for this genre before everything is said and done.