The strategy genre has long been a favored genre as it allows me to flex my tactical prowess ( or fail miserably ) while faithfully acting the part of armchair commander. The love for the genre is not limited to video games either, as I have been a fan of the Warhammer tabletop game which in its own way is a tactical tabletop strategy game. Whether it is through a video game or if it is through a physical game like Warhammer, I have always enjoyed the genre. As strategy games continue to evolve, more features, deeper combat, and more simulation-like aspects are being added which helps drive new users and veterans alike to the genre. Slitherine’s Commander: The Great War certainly tries something new, something that I have not personally experienced before. 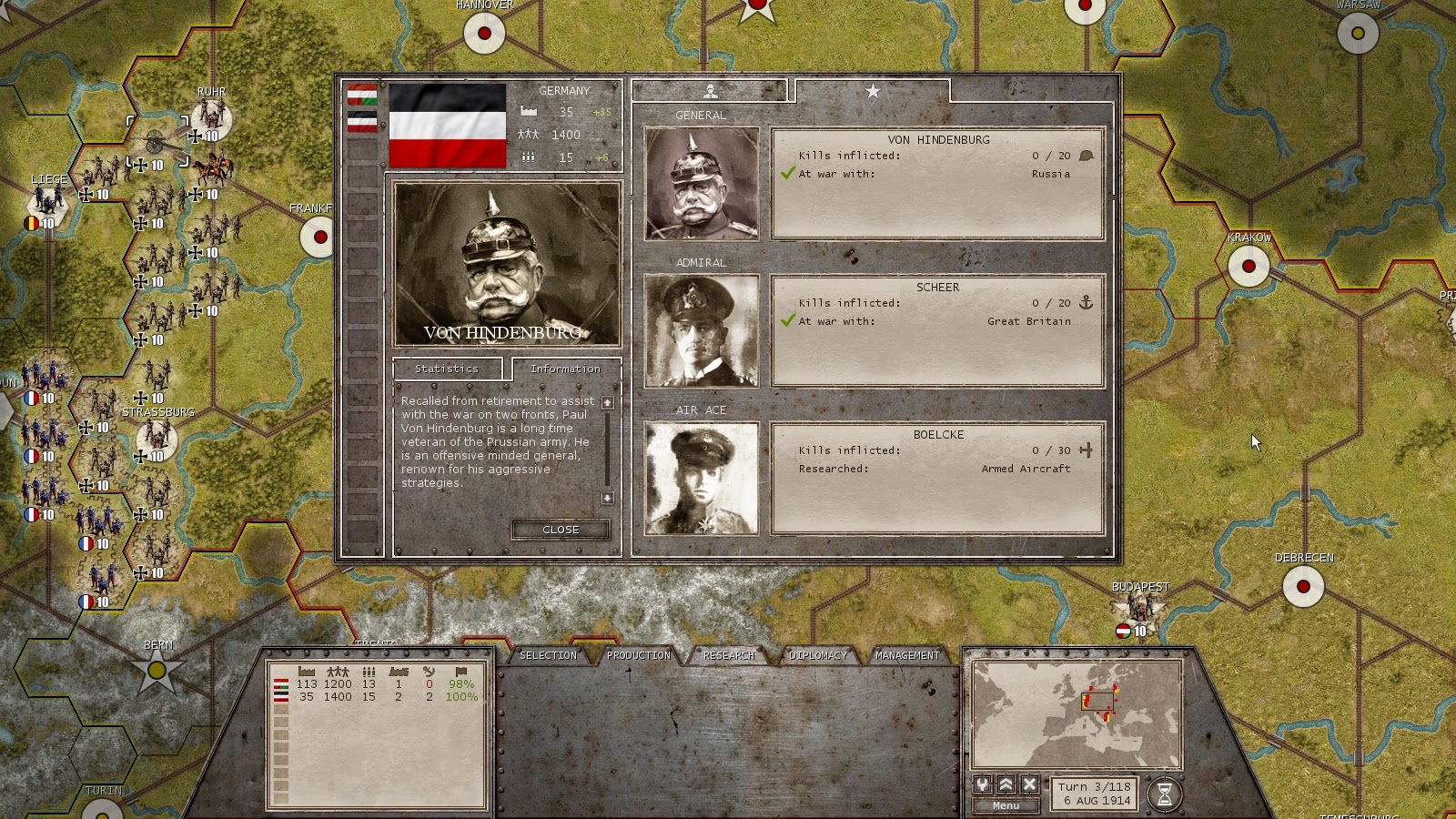 Commander: The Great War has a giant playing board which is most of the eastern hemisphere, specifically focused on Europe and Russia as it takes place during World War I. Looking down on Europe is an interesting affair, the board is quite detailed, showing mountain ranges, major rivers, forests and other geographical landmarks. What is interesting about it is that it feels like you are hunkered down over a map, as in a real painful to fold map which is something that I have not experienced with any other strategy game.

In all honesty the way the board is designed put me in the mental state that I was really a commander looking over the broken fields of Europe during the first World War. Units, from small garrison troops to the infantry units that resemble large armies, from airfields to artillery, each is detailed and easy to notice at just a glance though I did run into a few issues distinguishing the colors of the troops (I’m fairly color deficient) as they each have varying colors for their different world powers. I was able to get beyond that little issue since there are small country flags that are shown in the lower left corner of the unit and this helped me to distinguish the different world powers. There were a few times I had to stop and look at the diplomacy manager in-game as I was pretty close to starting wars with my allies which would turn out to be a very bad thing. 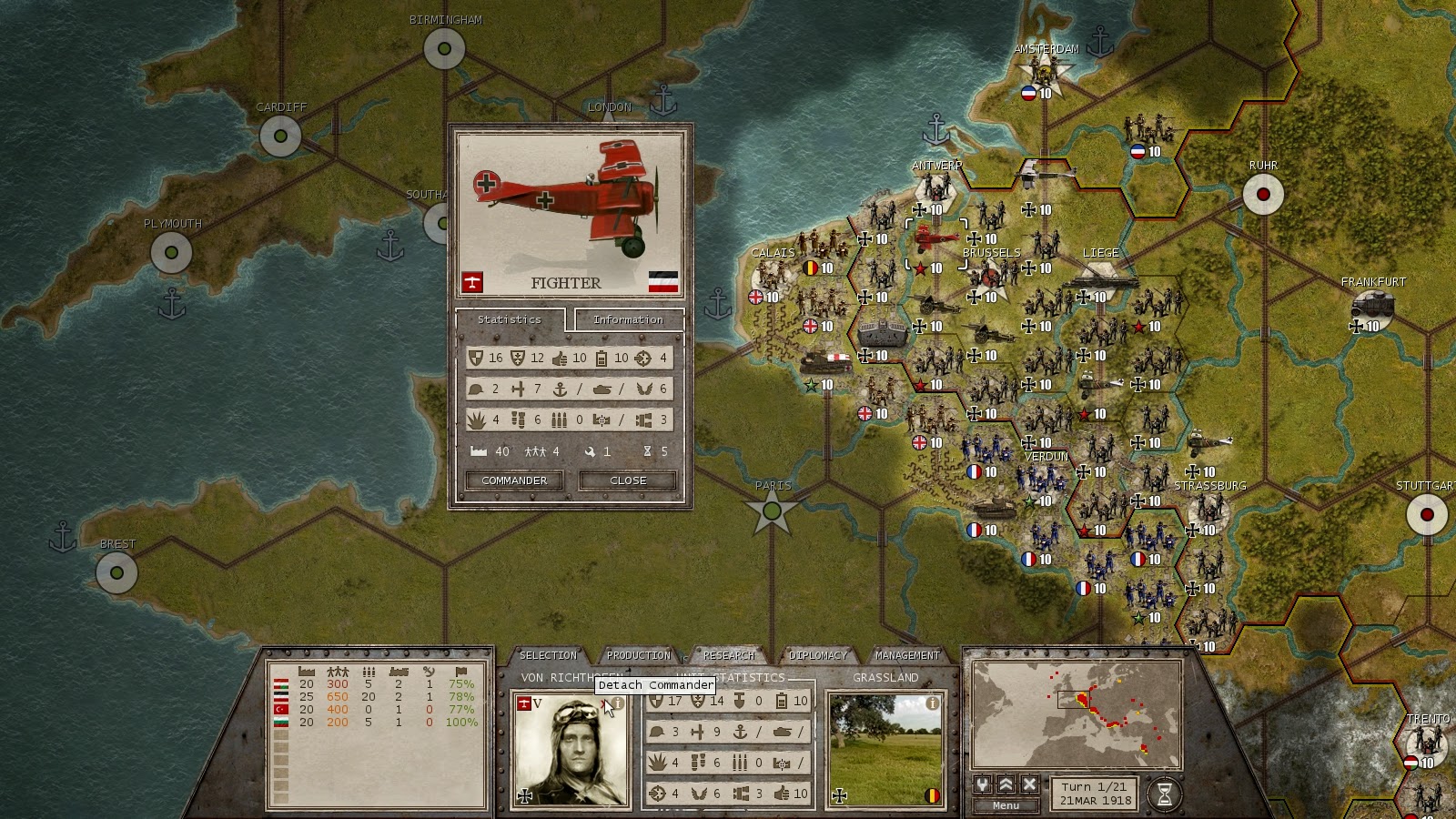 Combat animations are simple and adequately show that there is some action going on as there are little puffs of smoke and tracer rounds that appear on the individual units. I cannot really say that there is anything lacking as the animations all show exactly what you need when you need it and there is no uselessly gratuitous gore; this is a strategy game and is carried by the quality of its AI opponents and does not need some gory gimmick in order to survive.

Where the graphics provided exactly the right amount of flair and a solid user interface, Commander: Great War does the same with its audio. I do want to point out that the voice acting in this title is quite good and helped set the period. Hearing the after action reports and the news broadcasts in the old British voice really reminded me of the different news broadcasts that I have heard over the years that came from that time period. It was almost surreal as it felt like I stepped back in time. Combat sounds are simple and work fine as there is no popping or static and they play in sync with the animation that is on screen. As I had mentioned though, the voice acting is pretty great. Between turns there will be news update that have a little audio track that plays in the background that will have a sound bit that corresponds with what is on screen and that was a nice little touch.

When it is all boiled down, Commander: The Great War is about strategy and tactics; it does not need flashy graphics or full 7.2 surround sound, what it needs is depth, a quality computer opponent, and an uncluttered user interface. Fortunately Commander: The Great War has a wonderful and easy to follow interface and the strategy aspects are challenging and fun; thinking ahead a handful of turns is always a blast, especially when everything works out for you. 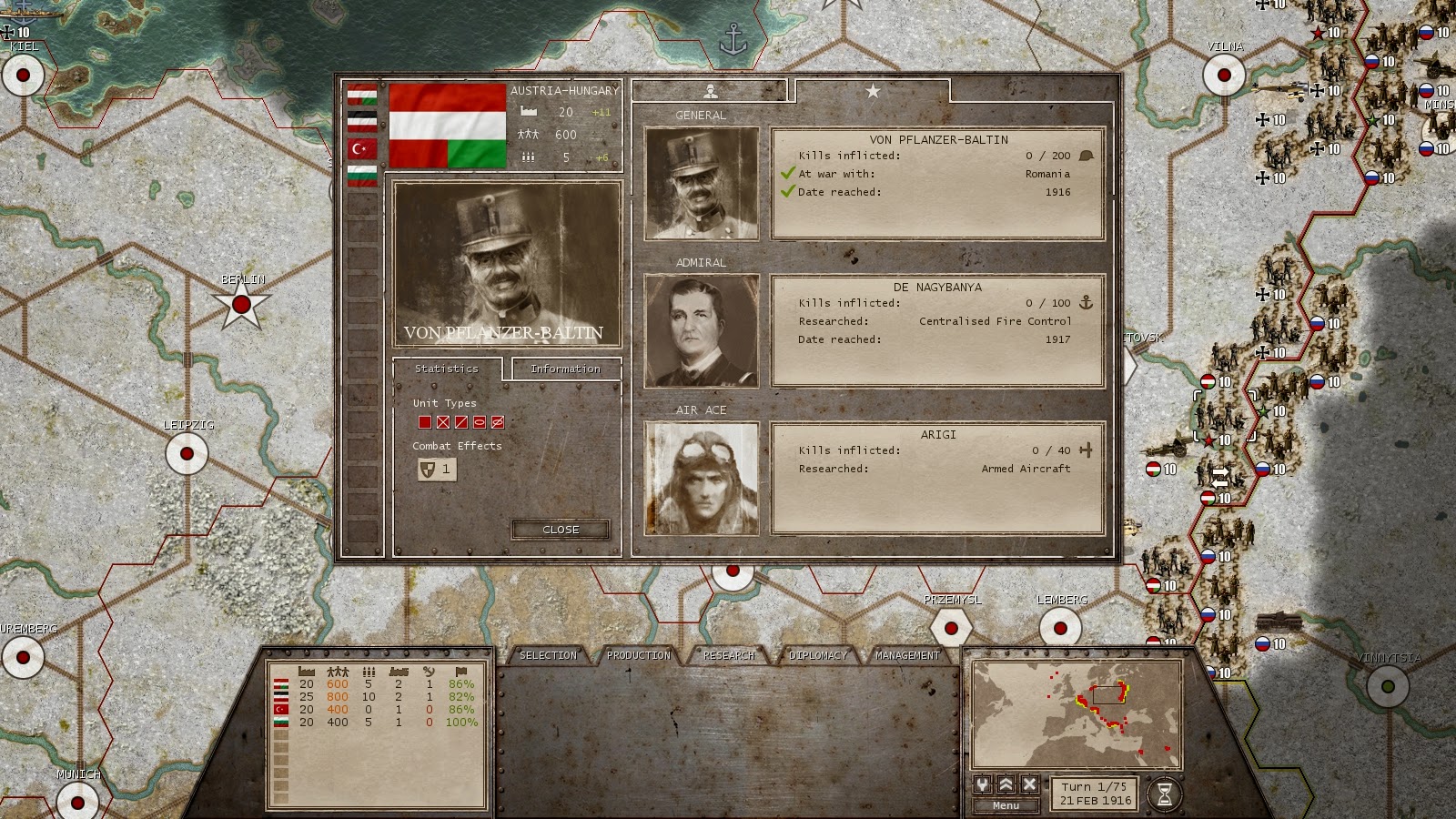 The computer opponent is where I struggle with the game, there are times that I am convinced that the computer is cheating and other times where I wonder if I am playing against a six year old child. There were plenty of times where I would use a classic pincer move, letting the center unit fall back a few spaces causing the computer to ignore the flanks and move in on that center unit. I would then close the flanks around the enemy units and then decimate them from all side as they would have nowhere to retreat to. It is a fairly basic tactic and it seems to work nearly every time I try it. One of the things that I was not fond of is the way that the computer seems to always play, regardless of the map or the layout of troops. If there are two lines of opposing forces, the computer will simply use a switch feature to attack the line with one unit then immediately rotate in and attack with another unit. While a common tactic in warfare it is used relentlessly and with absolutely demolish your units regardless of what they are. A cheap tactic that is more aggravating than anything else.

During your turn there is a wealth of information available for each unit in the bottom center of the user interface. It will provide you with everything from ammunition to supply stores to unit morale and health. During combat it will show the expected prognosis based on all of the aforementioned stats for both units. Even after hours upon hours in game I am unable to determine any sort of pattern or use for the information as it was almost always wrong. As I played the first (or primary) campaign there were a few spots where the prognosis was heavily in my favor listing a 0 to 4 ratio, indicating that I would lose zero guys while the opponents would loose 4 (thus wiping them out). 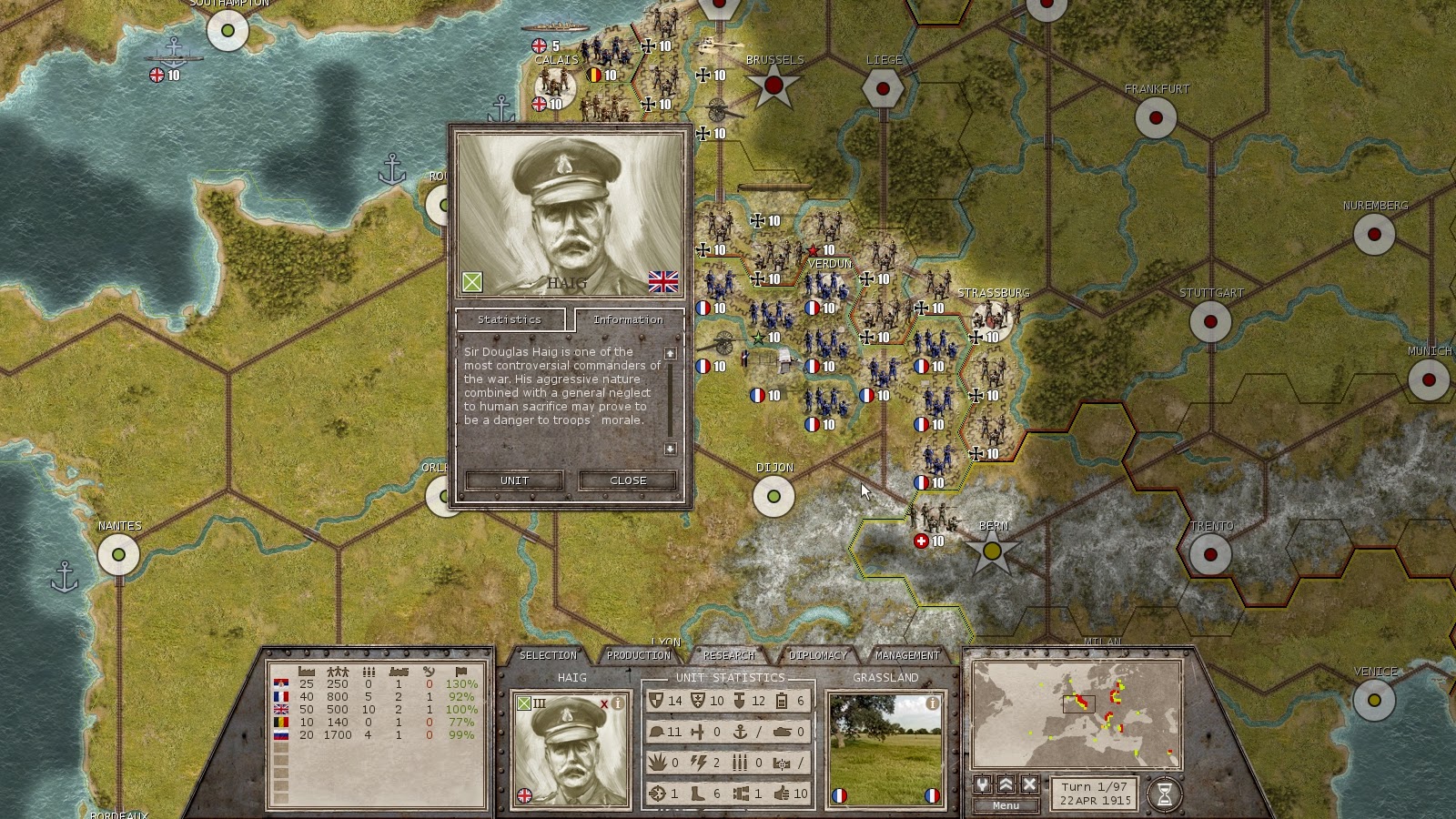 Once I initiated combat I killed two units and they wiped the floor with my unit completely, there was no retreat period, it was simply instant death. If this would have happened once or twice I don’t think that I would have minded, since it could be just a streak of bad luck, but it did not happen only once or twice but sometimes three and four times per turn. I was quite distraught when I lost Serbia due to an entire turn of combat resulting in the same false prognosis. Truthfully I think it would be better to not have the prognosis portion and simply leave it to chance; a number of strategies failed as I was blindly trusting the information that the game was providing me. Once I realized what was happening and started playing more cautiously I was able to escape some of that, but not all.

In the opening paragraph I mention that Commander: The Great War does something new; it is not in its strategies or AI opponents, nor is it in the graphics and super neat playing board. It was the setting; I cannot recall a single World War 1 game that I have played. Ever. Commander was definitely a new feel since I was not able to rely on things like air strikes or heavy armor support since the title uses period-specific units so throwing piles of infantry at a fortified location was generally the best tactic. You can use the airfields to launch reconnaissance units that will demoralize the enemy unit, you soften them up with some artillery then walk your infantry through them; the results are just as punishing as the real thing would be. Being able to use real tactics in a game against a computer opponent is always a blast and minus a few forgivable issues with some of the computer opponents, Commander: The Great War is a solid entry into the strategy genre and should be picked up by any history fan or strategy gamer.