I have been a huge fan of strategy games for as long as I can remember; while the pace is generally laid back, the scope and capabilities that strategy simulation games bring to the table is staggering. At some point along the way I become somewhat fanatical about space-based 4X strategy games (likely due to Alpha Centauri) which eventually developed into a healthy obsession over space-related video games. There is something grand about managing a space-faring civilization as you work to take over the galaxy, whether that is by diplomacy, economic domination, or by way of military conquest, the choice is yours. I think that the depth that these strategy games from the micromanagement of an individual planet’s resources to the tactical positioning of military assets, is why I am so interested in them. That and they give you your share of options, if you want to parlay with a particular civilization and craft a relationship with them, you can, or if you wish to declare war on a civilization, you can. It is these options that really interest me, as no other games out there come close, with the exception of role-playing games. 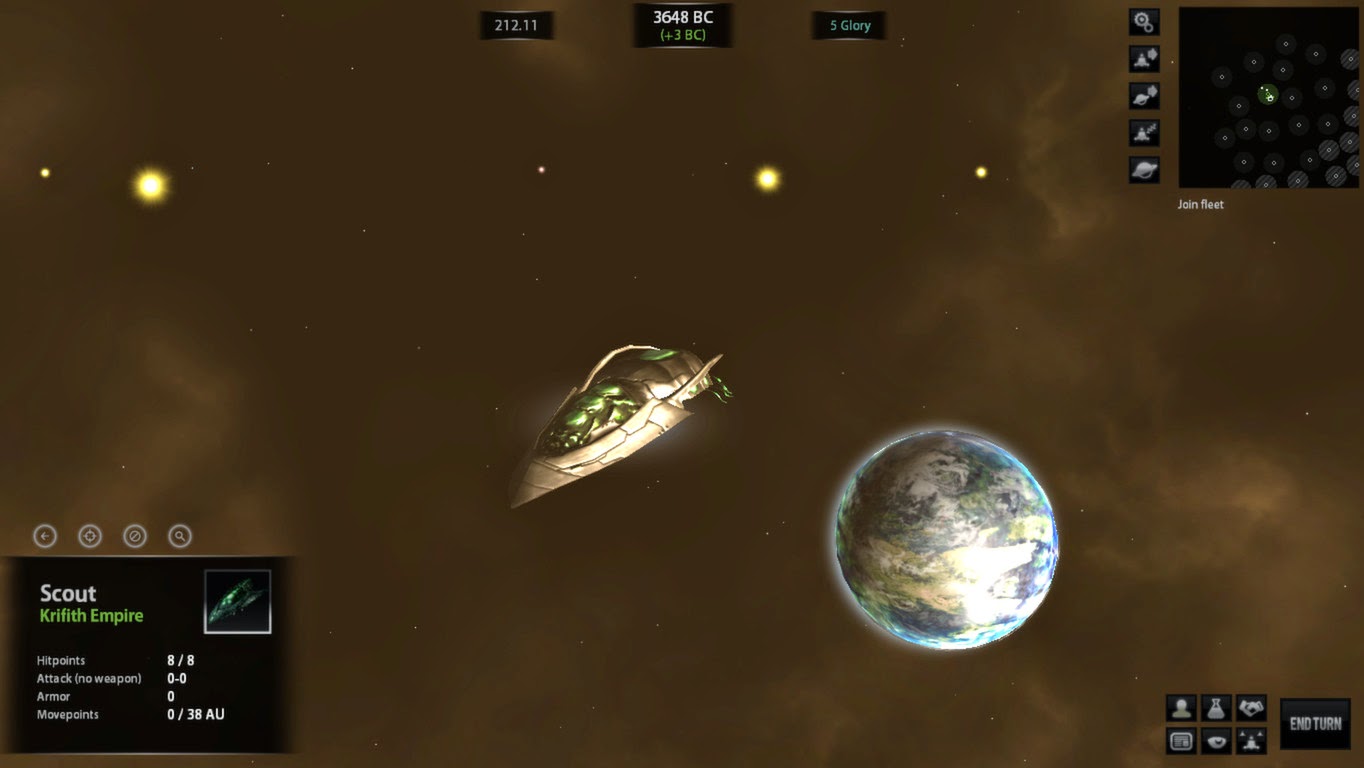 When I first heard of Lords of the Black Sun (previously titled Star Lords), I was immediately interested. Here was a title that was looking to breathe some life into the 4X space strategy genre; most of the recent releases in this style of game have been centered more around action and explosions than by what really made these games special; diplomacy, espionage, and conspiracy with a healthy dose of economics and military maneuvers mixed in. Lords of the Black Sun is trying to re-focus the genre’s energy back to the very principles that made it so popular. Now, me being me I was happy with anything in space. Heck, I spent hours upon hours in a beta build of Universe Sandbox which, at the time, was nothing more than you flying around looking at all of the different planets and space debris; you could not even build anything but man I loved it.

That aside, the space-based strategy genre contains some of my most favorite titles; games like Alpha Centauri, Galactic Civilizations, and Endless Space (I could probably list a dozen or two titles …) and I have spent hundreds of hours micromanaging my colonies, authorizing military and trade embargoes, declaring war of friends and making friends out of enemies. I personally feel that not a single minute was wasted as each game I played has faithfully represented this beloved genre; brought something new to the table, others were simply spectacular stories. The real question here though, is how well Lords of the Black Sun is shaping up and whether they really are bringing the focus back on espionage and diplomacy.

I am just going to throw this out there; Lords of the Black Sun is in Early Access. This means you may experience world-ending bugs or crashes, unfair or repetitive AI or computer-based tactics, or loopholes and other small oddities that lead to exploits and some pretty frustrating. I personally ran into crashing and other erratic behavior, however this fact is not one that deters me (nor influences me away) from playing the game. I am fully aware that the game is still in development and I take pride in knowing that the developers are looking to me (or you) to provide well thought-out and respectful feedback; tell them what it is that is broken and provide some info on how you think it can work; I know from personal experience that the developers really do want to hear it (some have asked me in-depth questions and really made me feel a part of the development process; an experience that I think every gamer should experience), good or bad. Just be respectful; they are people too, and they are putting in their time to make a game for you. 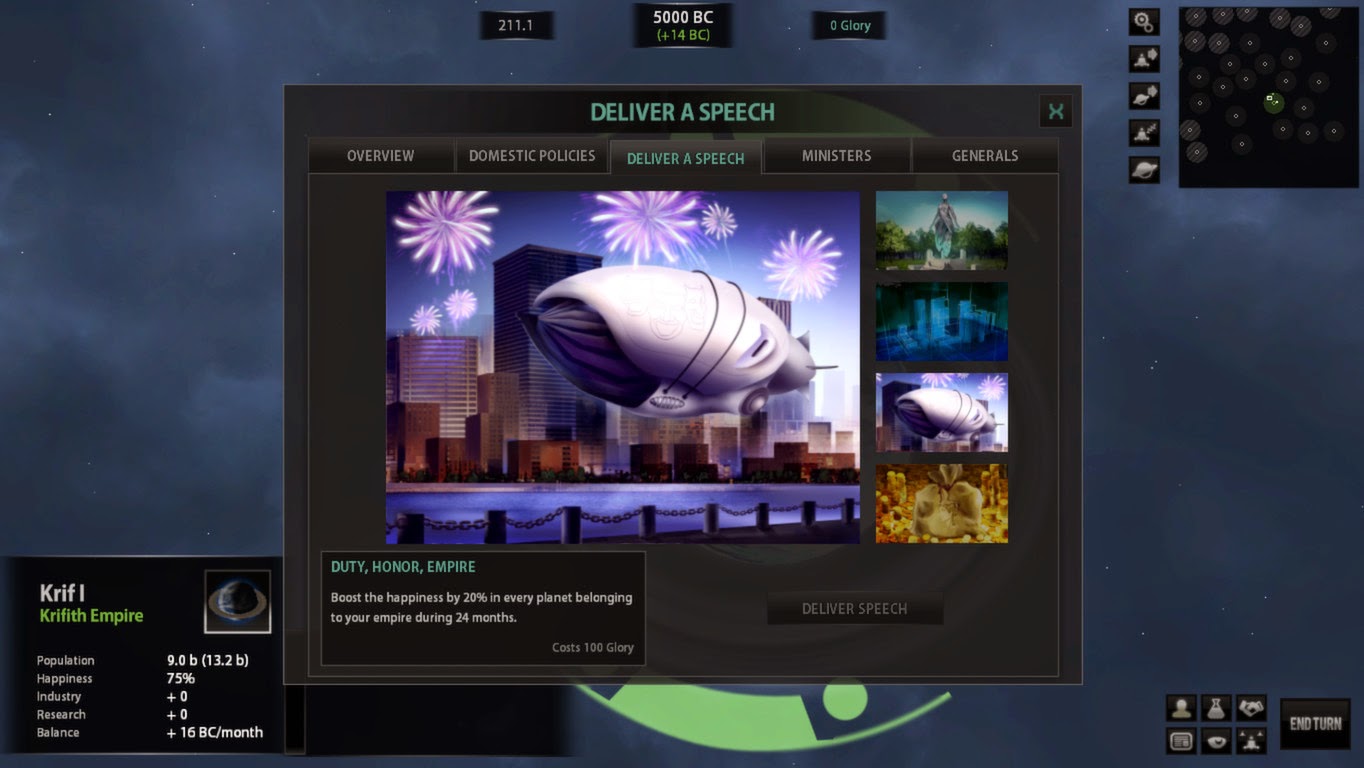 That said, outside of the technical mishaps that are bound to happen in an Early Access environment, how is it that Lords of the Black Sun plays? The TL:DR of it is this “Wonderfully focused.” An issue that I see often in 4X strategy games is the unintended side effect of too much information. Occasionally a game will provide the player with so much information that you end up not knowing what to do with it all and you become frazzled with all of the data. Far too often I have seen veteran gamers that are new to the genre give up in frustration because there is simply a ton of information at your finger tips. Lords of the Black Sun aims to simplify some of information flow throughout the game in a way that does not “dumb down” the gameplay while still creating a welcoming environment for the new players. At this point they are doing a fine job of it, though I did find that, at times, it was a bit too simplified. I would find myself colonizing a planet only to put a defense tower, a factory, research lab and police station on it, park two medium-hulled spacecraft and two scout-classed units in the garrison that I would simply forget it existed; there was not incentive for me to go back to deal with that planet unless I was considering making it my capital.

Outside of that it was no different than a fire-and-forget system; colonize, build, garrison, move on. I would leapfrog system this way making lightning fast expansion a viable tactic for galactic domination. The issue was that it was so easy because I did not need to really worry about an individual planet’s resources or populace; streamlining a game to make it accessible to a wider range of players is extremely important, however it should not come at the expense of the current fans of the game. It is a bit like biting the hand that feeds you and it is an extremely difficult path to walk, personally I feel that a few more options, maybe something along the lines of local populace control, like individual planet taxes or unique goods would absolutely add to the depth; as it is I feel it is a tad shallow, though it is in Early Access so more may be coming.

Graphics are top notch for a game that has such incredible scale; since most 4X games are about the strategies and interactions between civilizations, graphics can generally be toned down. Fortunately Lords of the Black Sun keeps a majority of the content simple yet detailed with each planet appearing just different enough that the game is not boring. Spacecrafts need a little variety thrown in as there were plenty of times I had mistaken a light-armor craft for a medium or heavy (but never capital ship) classed ships while in the galaxy map; once I got into combat with the crafts it was no problem, just the galaxy map where everything appeared just a bit too similar. Laser beams and plumes of smoke adequately display the destructive natures of the military aspects and help ramp up the excitement for when you go into combat, though I believe that fleet management needs to be implemented a little better. I am still not quite sure of what to make of what little fleet management tools there are so I will hold on going into detail about it. 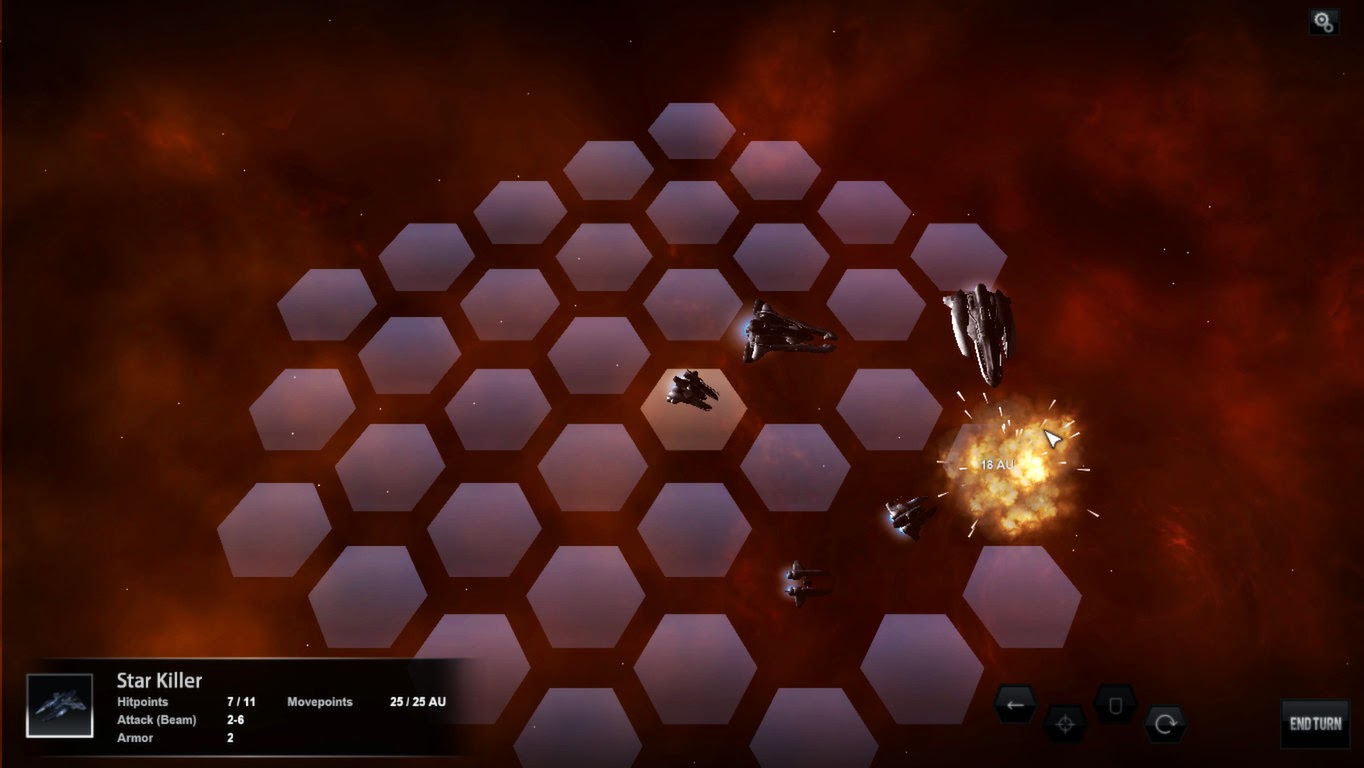 I can say that building your own craft loadouts are fun; then again, anytime you can pile weaponry onto a giant space hulk is just … exciting. Being able to see them in action is even more so. It would be nice to see a bit more variety in the selectable ship styles; there are not many choices so it would be nice to see more. While Lords of the Black Sun is not focused primarily on the military aspects, as it tries to focus more on the espionage side of things. Fortunately the sabotage/espionage portion is excellent; beyond excellent. Arkavi Studios (the developer), and publisher Iceberg Interactive have both made mention that Lords of the Black Sun is trying to breathe life into the espionage and sabotage aspects of 4X games. With what they have put together so far, the espionage/cloak-and-dagger stuff is the most satisfying part of the game. There is something extremely neat about waiting out the turns to hear if your espionage missions have gone off without a hitch or if they were caught. If they were caught it leads into an extremely intense few rounds as you wait to hear if war was declared or if you’ve ruined relations with an up-and-coming ally. It is wonderful and I can only hope that they continue to build on this extremely strong gameplay feature.

While Lords of the Black Sun is still in Early Access (and may be in it for some time yet), what is currently available is well built and lays the foundation for what will most definitely become an excellent 4X strategy game. Some features, like more micromanaging individual colonies, will hopefully be added as time wears on. Amidst the list of “nice to haves” should be a more varied and robust sound track, possibly even the addition of a feature that would allow you to enter your own music library; these types of games can be long and hearing a few tracks on repeat throughout your turn can be grating. I for one like a little variety (or a second monitor playing Star Trek: The Next Generation via Netflix) in the audio tracks and in such an early build there just needs to be more. What is there is great, but more would be better in this case. Gameplay mechanics are strong, espionage missions tense and exciting, and combat is tactical and engaging and all of these little bits are adding up to a great 4X package that should be a part of any gamers library. You can purchase the Early Access here. In its current state, I highly recommend Lords of the Black Sun. 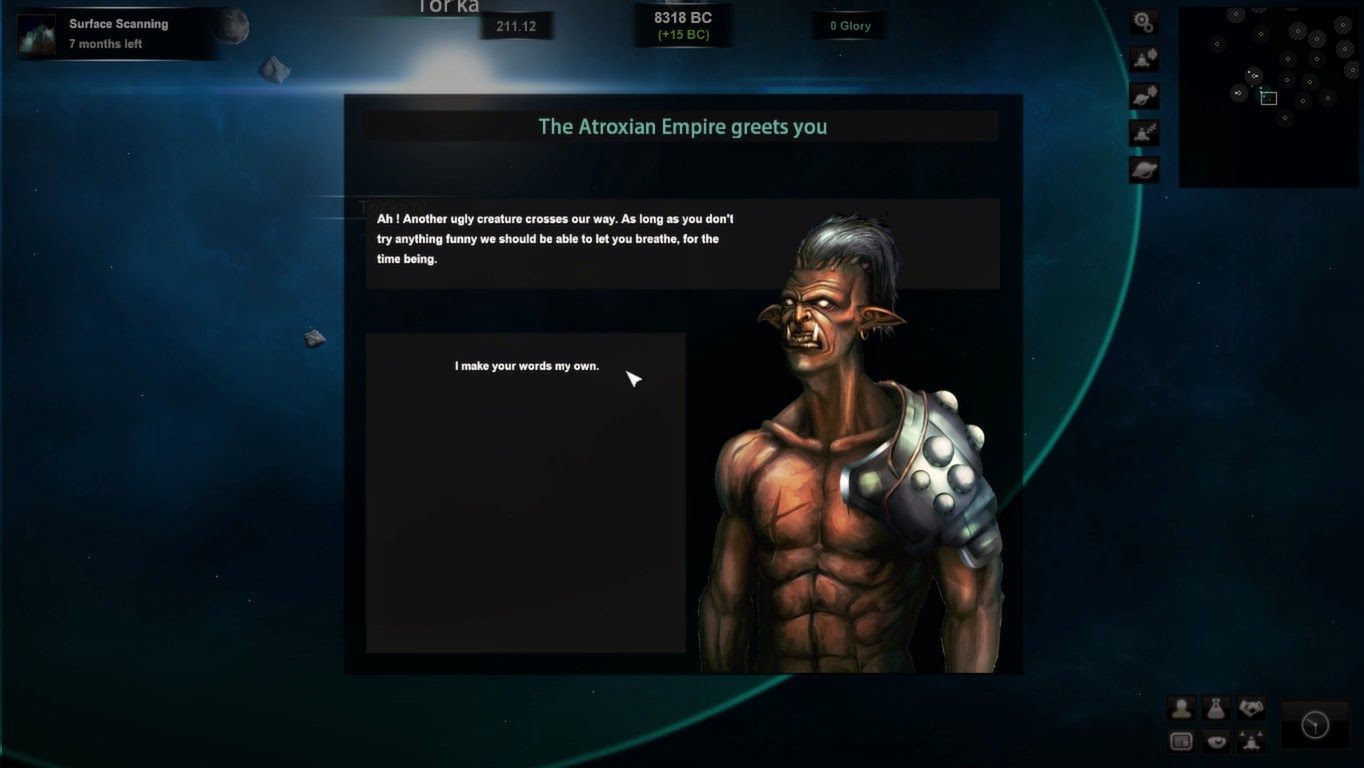 Facebook Twitter Pinterest E-mail
Previous article The Legend of Heroes: Trails in the Sky - PC Review
Next article How about some Hyperdimension Neptunia Re;Birth1 gameplay footage?