When my mind wandered in math class when I was a child, I would imagine little characters hopping around the classroom, making their way from one side to another, manipulating things to make the impassable passable. When we came to learning what pie charts, bar graphs and the like were, I basically played this game in my mind, way back in elementary school! 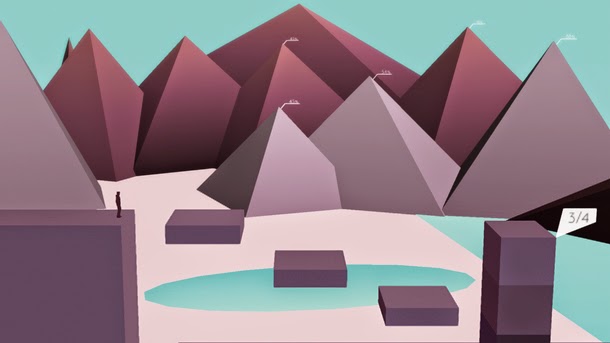 Metrico is a puzzle platformer that will have other people looking at you oddly as you experiment with turning, rotating, flipping, tapping and otherwise resisting the urge to throw your vita at a nearby wall. The controls are fairly primitive, in that you jump, shoot, respawn, aim, and then generally just find new and uncomfortable ways to sit while you turn your Vita. Using the information systems of the handheld, some of the platforms will move, extend, retract and otherwise change depending on how you move, both in the game and in real life, as well as some oddly specific things, like puzzles that require you to throw yourself down a hole five times so that a platform will rise up and let you cross a broken bridge with one fewer jumps, because the rising wall on the end goes up each time you jump.

This summarizes the entirety of my experienced with Metrico, which felt like a shorter game, but perhaps I just blew through the puzzles faster than most? Most of them took me no more than one attempt, the most vexing of the lot taking me three attempts at it before I figured out how it could be solved and then executing said plan.

While I failed to find true challenge in the title, I really did like how the end of each set of levels met with a bar graph giving the illusion of a statistical analysis of the behaviour of others that played the title, but since I am doing a pre-release review of a title, and my choice did not alter the readout in even a miniscule fashion, I swiftly became disillusioned with this. Upon release, this will be almost impossible to determine, though, and the things that they do with that illusion of choice are interesting in ways that I will refrain from getting into to reduce spoilers. 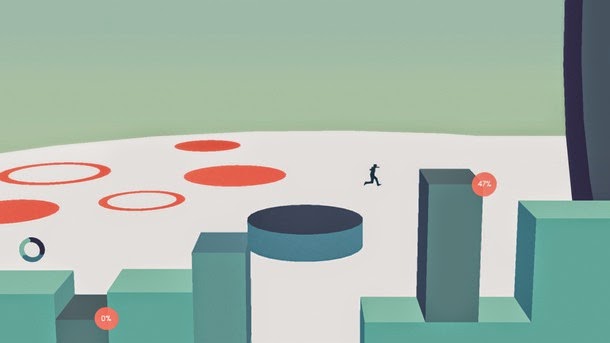 The visual style is clear, concise, and shows precisely what you need it to. Your character is a silhouette, but there is no character development, no back story, no reason for you to be anything but a faceless individual in a sea of statistics. If it had more going on, on the screen, it would honestly detract from the title, so the simple geometric shapes, the arcs and loops of color in the background and the otherwise basic visuals really do work in the game’s favor.

Sound, on the other hand, was forgettable. There are games where sound is an important part of immersion, things creeping, setting ambiance, giving prompts and queues, but this really is not one of those games. A puzzle platformer that has you turning the game screen away from yourself will chime pleasant tones when you accomplish something properly, a suitably techno-y sound for when you respawn yourself.

At the end of the third set of puzzles, things start to go sideways perpendicular, and you begin to wonder if something larger than the basic puzzles that float on the surface might be in store for you. Hold on to that sense of curiosity.

This game did not disappoint in the least, and if you have a playstation plus subscription, it is slated for this month’s inclusion on the Instant Games Collection list, so what do you really have to lose? I would still recommend buying this game if you are not already having it handed to you, if you like precision puzzles.