Rogue Legacy comes to us courtesy of Cellar Door Games, who launched a desktop version last year and recently re-released on PlayStation 3, PlayStation 4 and Vita. With the new version available now, I decided to take another, closer look at this “Rogue-lite”. Success of other recent Rogue-like titles like Binding of Isaac, Don’t Starve and FTL have already shown that the modern gamer is more than willing to embrace the punishing, yet rewarding, gameplay style inspired by the original text-based “Rogue” title. 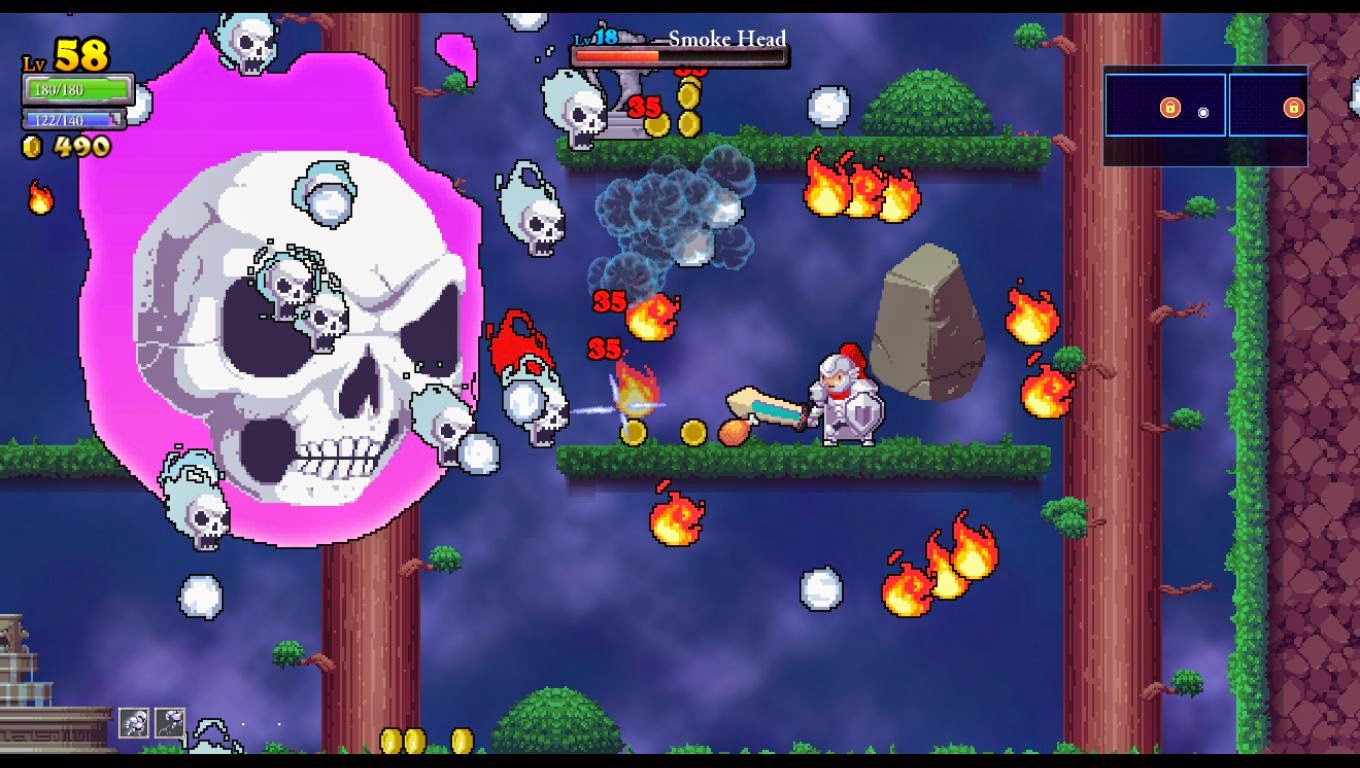 Rogue Legacy stars an unending series of heroes exploring a randomly-generated castle filled with monsters, bosses, and loot. When the player is defeated, which will become a familiar experience in short order, the next generation of hero is chosen from a panel of three randomly-generated descendents of the deceased. No explanation is given for how every single hero has managed to produce offspring before beginning his or her adventures, nor does anyone know why the children follow their forebears’ lead like lemmings into the sea. Mysterious journal entries give some semblance of an overarching story and motivation to progress.

New heroes belong to one of a series of unlockable classes, which drastically affect their play style, and may have a series of keywords or “affixes” that alter the current experience further. Many of these are quite tongue-in-cheek, ranging from “ADHD” which grants a speed boost to movement, to vision conditions that affect the game’s actual display like “Far-sighted”, to the gut-wrenching “Vertigo” which inverts the entire game screen vertically. Others are purely flavor, such as “The One” which changes the load screen’s text to “Jacking In” and replaces some of the background textures with a more high-tech visual style.

Each character has the expected equipment of weapon and armor, as well as one or more spells, and eventually you’ll unlock per-class special abilities as well. The spells feel very familiar for fans of the Castlevania series, right down to including throwing knives or tossing an axe in a high arch. To continue the Castlevania homage, many of the background items are breakable, and break them you should! It’s a great way to start amassing gold coins. 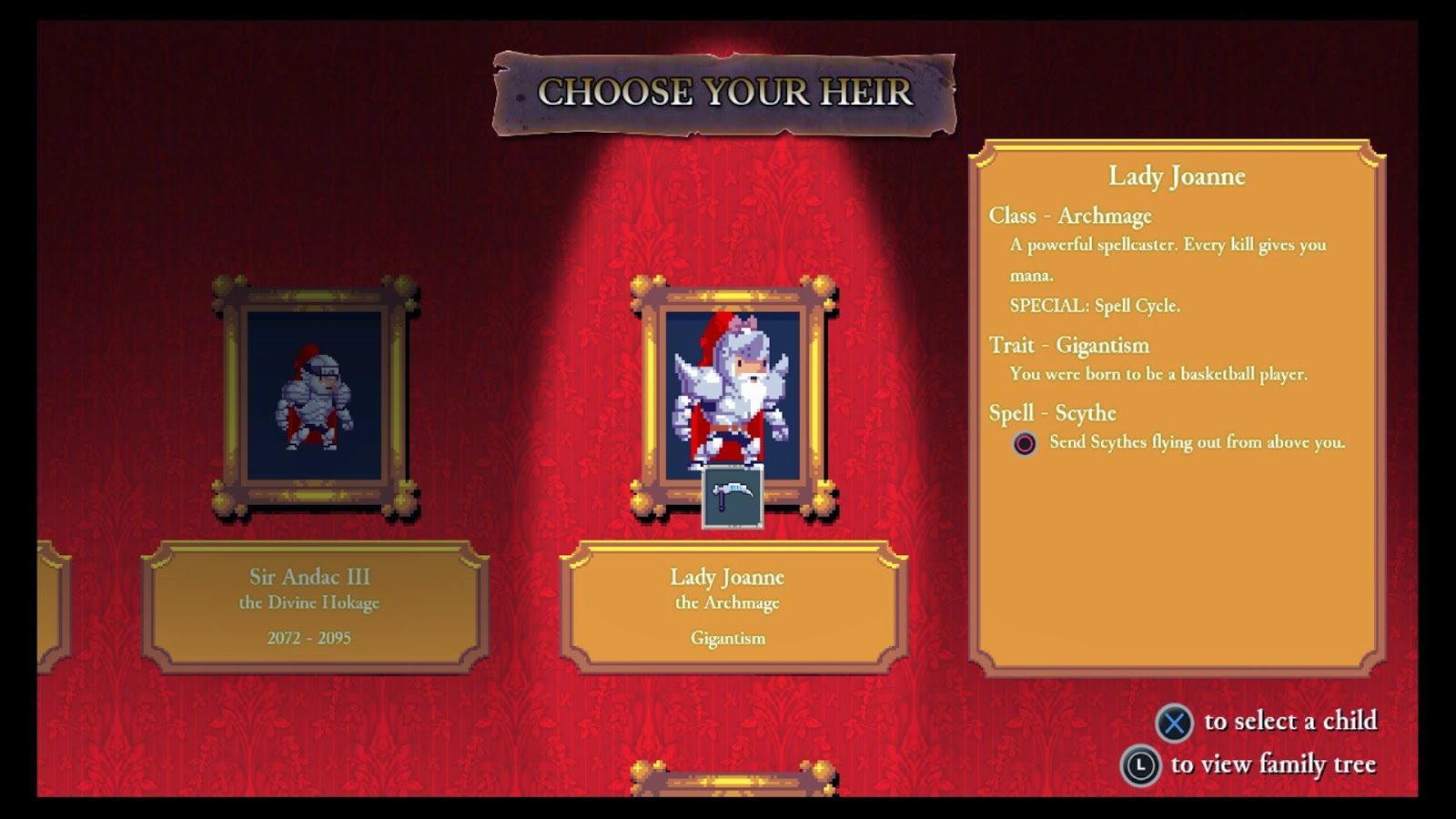 Nearly all progression within the game is gated by and funded with gold. However, before your eyes turn into dollar signs, bear in mind that every time you die and start over on a new character, you have to pay a toll to re-enter the castle. The gatekeeper Charon initially takes ALL of your remaining gold, which puts a strong emphasis on spending your gold as efficiently and completely as possible before renewing your explorations. Later on you can spend a good deal of gold to allow yourself to keep up to 50% of what you earn. While it can be frustrating to make run after run where you just don’t earn enough gold to make tangible progress, there is a surprising selection of ways to spend your ill-gotten gains..

Other NPCs appear outside the castle as you progress, allowing you to purchase and equip new armor or weapons, as well as attach runes to grant special abilities. The largest gold sink in Rogue Legacy by far is the Manor, which serves as a branching skill tree with ever-increasing costs. Every time you bump up a stat, or unlock or upgrade a class, your future upgrades become a bit more expensive. These also contribute to your character’s Level statistic, which can be viewed from the main or pause menus on a Magic the Gathering-style trading card.

The branching path through the Manor’s unlocks is not always intuitive – at times I fatalistically purchased the single upgrade I could currently afford, only to unexpectedly unveil a powerful new class or upgrade that had no seeming correlation or shared theme. I do wish the Manor screen did a better job of highlighting or indicating unlocks you can currently afford without having to flip around the whole menu to browse. 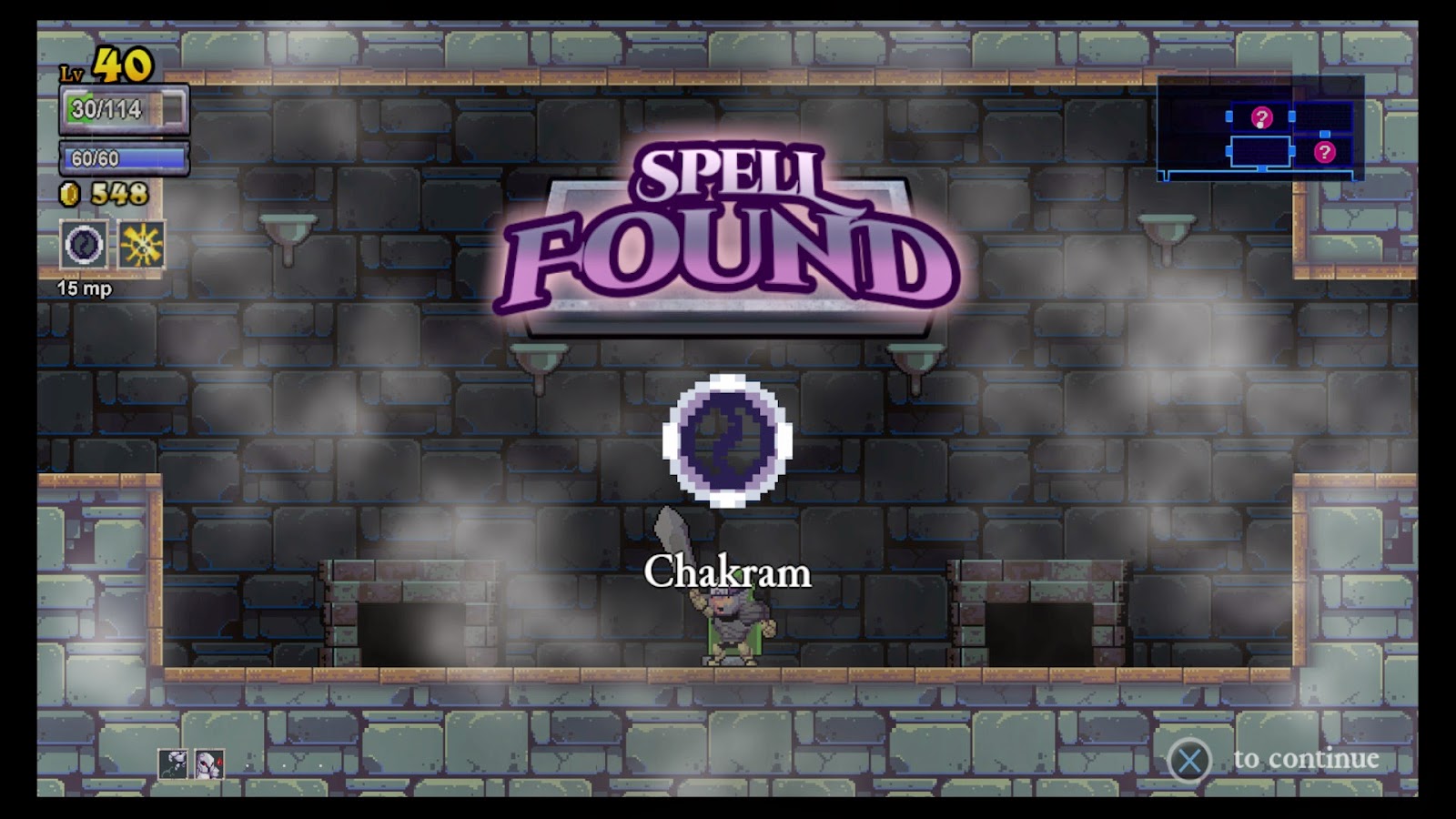 For this review, I played Rogue Legacy fairly interchangeably on my Vita and Playstation 3, since they are running more-or-less the exact same game engine, and this allows cross-platform synchronization of your saved game. You can install the game on all three platforms (PS4 included) from the same game code or purchase, which is welcome, and continue to progress on whichever is convenient.

One of the few qualms I had was as someone who wears corrective lenses. The graphics are quite crisp on the Vita’s screen, but the UI has not been optimized in any way for a smaller display, making me squint a little to read things at times. That problem aside, the graphics look great, with a charming cartoony style that succeeds in not taking itself too seriously. Enemies in harder zones are often a recolor of previous enemies, something the game directly acknowledges with its self-aware sense of humor.

The controls are tight and responsive on either the handheld or the controller. Be prepared to work on your timing, as the merest brush with hazards or enemies can deal quite a lot of damage. My one complaint regarding the controls is that it takes a bit more than a moment of side-to-side motion to change your character’s facing, which affects where you fire off spells or swing your weapon. This has resulted in me accidentally sliding my backside up to a monster instead of the pointy end of my sword on more than one occasion. 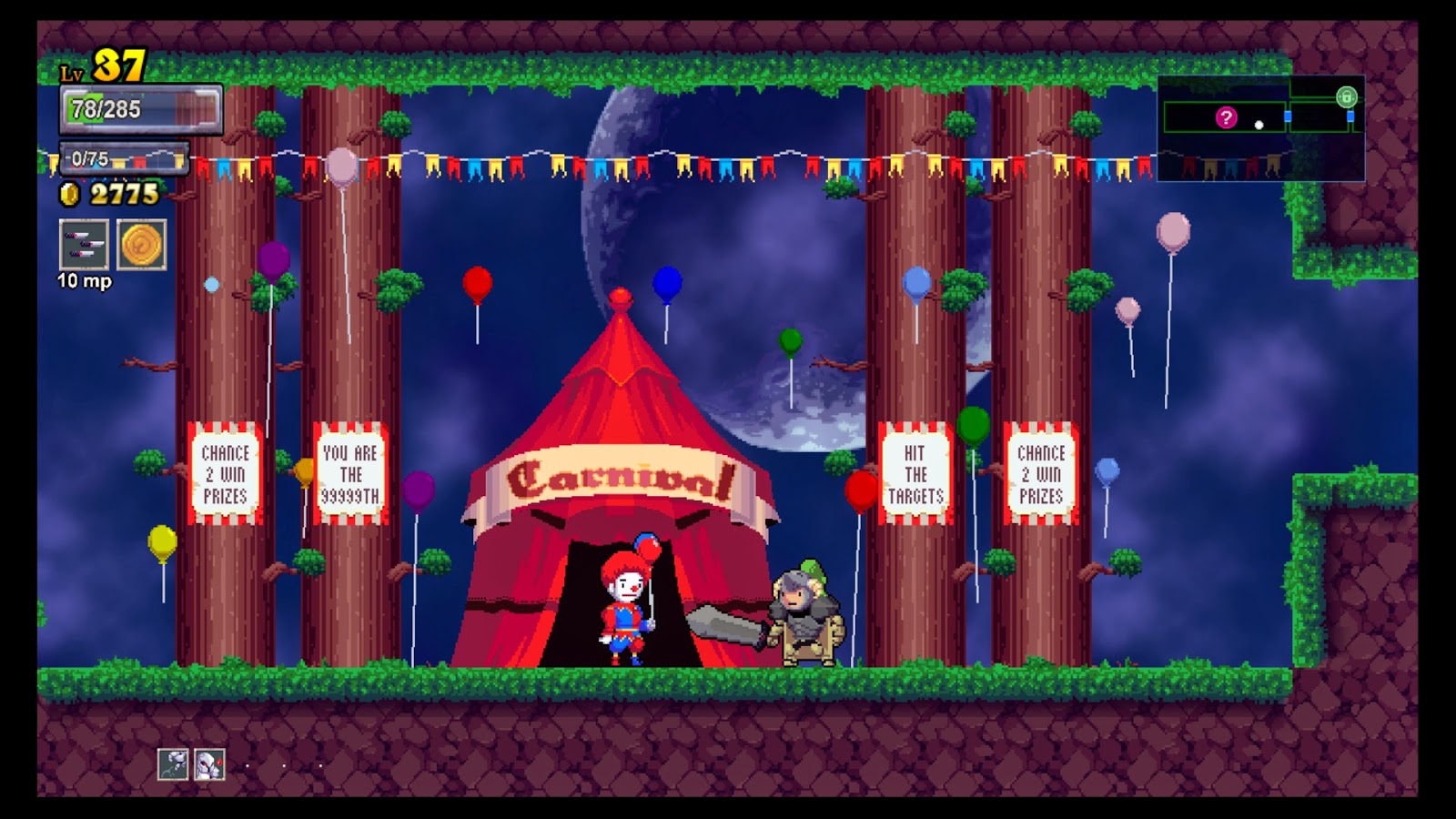 The sounds often fade into the background for me as I played, but are perfectly adequate. The limited selection of music can occasionally become a bit monotonous, but fits the cheeky, retro vibe of the game overall.

The gameplay itself is excellent, marred only by some slight gripes, such as the repetitive music. The sprite graphics are very well done, but occasionally reused, and the game interface has not been optimized for legibility on the Vita’s small screen..The Manor system provides plenty of depth, albeit in unpredictable order, and there are lots of laughs to be had as you experience the oddball humor that is sprinkled liberally throughout. Rogue Legacy has a steep learning curve to reach true expertise, but rewards practice and persistence in a very satisfying way.