Some of the worst lines that anyone can start a conversation with is “I am not sure how to say this…” or  “We need to talk.” Fortunately this conversation will not be starting off with the latter, the former though? We will have to see, but first, a little background. When the original Sacred came out 10 years (2004-ish) or so ago, it was well after Diablo II: Lords of Destruction came out and was just different enough from the Icewind Dale/Baldur’s Gate games that Sacred was filling a niche that in all honesty, had to be filled. The original did a fair job of giving us the action and RPG elements that we wanted in lieu of a Diablo sequel (that would not come for another ten years after). While not a clone, Sacred gave us plenty of dungeon-crawling goodness while offering up a little bit of humor. 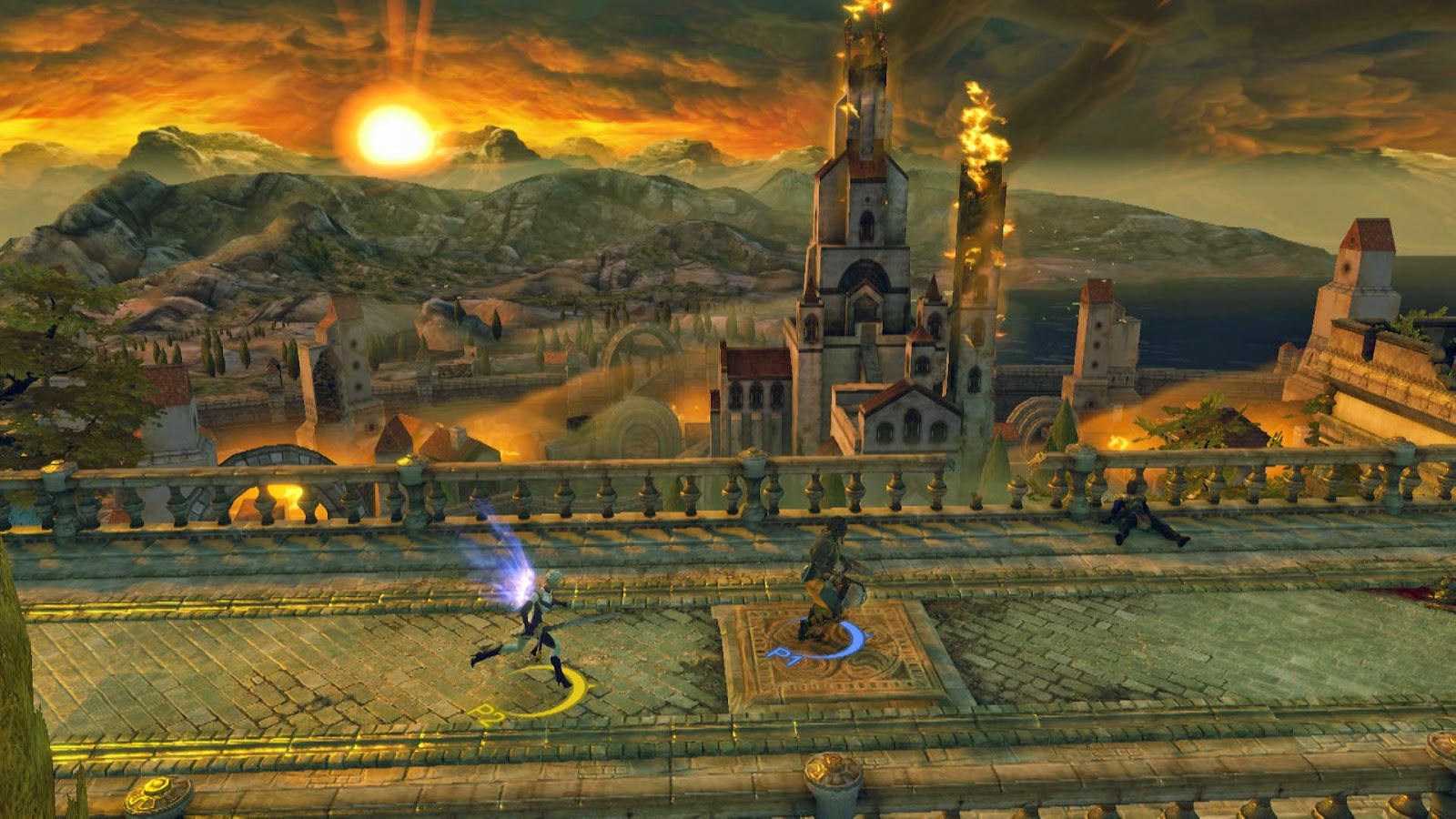 Diablo, while excellent, was dark and sinister and Sacred had a bit of that too, but they had wit and a few comical points and they ran with it and it worked. Four years after the initial release, Sacred 2 launched right around the same time that Diablo III was announced by Blizzard which was a brilliant move, selling well on the hype of gamers needing to get their fix in while they wait for Diablo III to come out. Fortunately Sacred 2: Fallen Angel was well liked, filling the void well bringing more RPG elements and the same low-key humor that the original did, played very similarly to the original, and did not try to change the genre. Over the last decade, the Sacred games have grown a cult following, managing to release at just the right time as hype and anticipation are growing. So if the first games in the franchise were well received, how is their latest entry holding up?

I’m not sure how to say this, but … it’s complicated.

Sacred 3 is an attractive game; running at 1080p on my Samsung laptop with the settings a full and it ran crisply at 60 FPS. Some of the smaller models ( these little imp-like characters ) are difficult to really pick out individually but that is okay as they move in swarms. Character models are well built and animated nicely even if there are times you cannot really pick out your avatar from the mass of flesh and flame moving across the screen. My personal favorite, the Ancarian spear-wielding master of Earth and Nature, is well animated and moves swiftly about the battlefield. The Seraphim, long a favorite being in pretty much any roleplaying game ever (come on, the Angels in other AAA action RPGs are great), is striking with her ethereal wings the streak oh-so-lovingly as she streaks across the field of battle, executing the doers of evil that are invading Ancaria.

Where I think the graphics may have gotten it both right and wrong is actually in the amount of detail on screen; the environments are lush, full of breakable things and that is great! The issue is that to me, everything seemed the same, there are a few items that have distinguishing features, such as bloom effects from lighting, but outside of that? It seems very detailed yet very busy, sort of like looking down on Shibuya Crossing in Tokyo where it is a mass of people that has very little definition unless you really try to focus on the individuals in the street. It is not a bad thing, but at times it can be confusing. Models and animations look great but it is at times, nearly impossible to  see much of them and that is a shame. I think being able to zoom and pan the camera would do wonders, especially since the lighting is quite excellent and overall the game feels far more alive than its competitors. 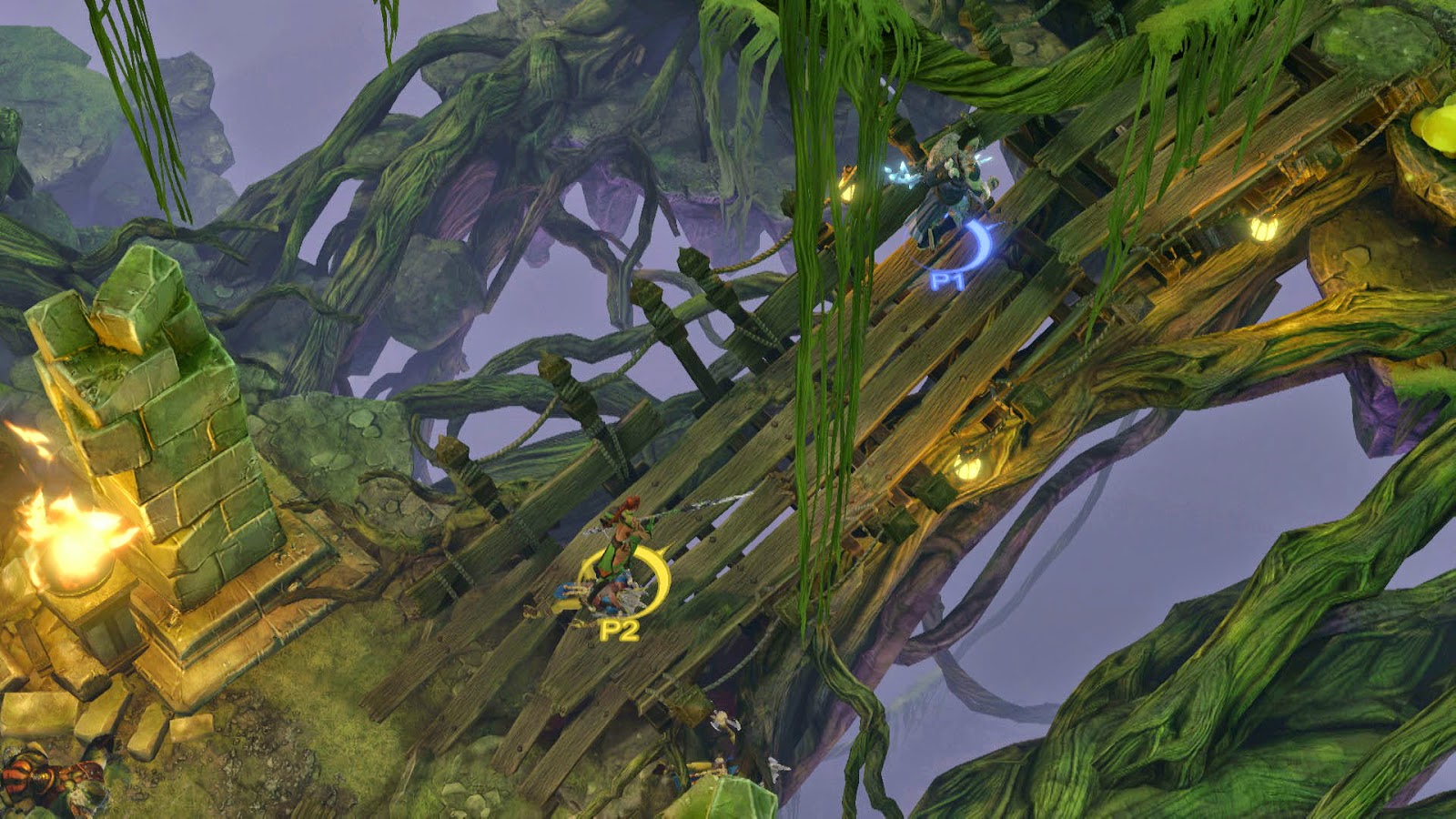 My gamepad is almost permanently attached to my laptop and is my preferred method of control when not playing an intense simulator or strategy game, and when I first started up Sacred 3 I squealed with joy seeing that the gamepad was supported right out the gates; you would be surprised at how many games shamelessly add gamepad support as a later addition or just wait for modders to do it. It is sad really so when I saw that, Sacred 3 was already sitting tall with me. As I started flinging around the different levels as my Ancarian spearwomen I became more and more impressed with the responsiveness of the controls. I felt like a wildly nimble female ninja wielding spears of death that would cause my foes to flee in terror or fall by the horde. I honestly do not think I have felt so nimble in a game that was not a 2D or 2.5D platformer where speed and precision are absolutely key. The controls are so finely tuned for the gamepad that I felt a little sick to my stomach while trying out the keyboard and mouse configuration (which in its own right is excellent) all because the feeling of the keyboard and mouse was rough, like new leather, compared to the supple, soft goodness of the cashmere that was the gamepad. I do not know if I have felt better controls in a PC action RPG game.

With swell graphics and spectacular controls, where is it complicated you ask? It is in the audio, and the way certain aspects of storytelling are handled. I will just up and say it; the humor, and voice acting attached to it, are horrid. Utterly terrible. I was embarrassed to be a human being at times and simply wish to live as a rock. I think it could have been handled better by more experienced voice actors but in all honesty I do not think so as the content was pretty terrible. I was actually sitting at my computer lamenting about the audio when a colleague and fellow reviewer piped up and asked how things were going; needless to say I shifted into the perfect example of my 7 year old daughter having a meltdown when I refused to pick up the latest Lego Friends set (I know, I am a horrible person). I personally put so much stock in good clean audio that games that are utterly unplayable, yet completely saved  because have awesome sound effects, some of the best voice actors, and audio engineers that really know their stuff to put together an unforgettable experience.

While I enjoy big screen tv’s (likely more than most) I would be happy with putting a premiere audio system in that takes advantage of the acoustics in the room and attach it to a 24″ tube TV. Audio makes, breaks, or saves whatever you are doing. Try watching a sporting event with no audio, or going to a movie and putting on ear muffs that actively block audio. It is creepy and terrible (in most cases); I will admit though, that some silent films are wonderful. In a game that is about an evil entity invading, and destroying everything that you hold dear, do you really take slapstick humor and poorly rendered audio effects and slap them together and call it a game? That is like remixing all of the delicious robot-on-giant-monster audio in Pacific Rim with Nintendo NES-era sound effects and calling it a “blockbuster.” It physically ails me to come down on audio of any kind, but the sub-par voice acting was painful and when it was paired with some terrible dialog, but it is what it is. I was incredibly distraught because I was so interested in Sacred 3 and the first few times poor audio and bad humor hit I was rocked, and not in a good way. How did I get past it? 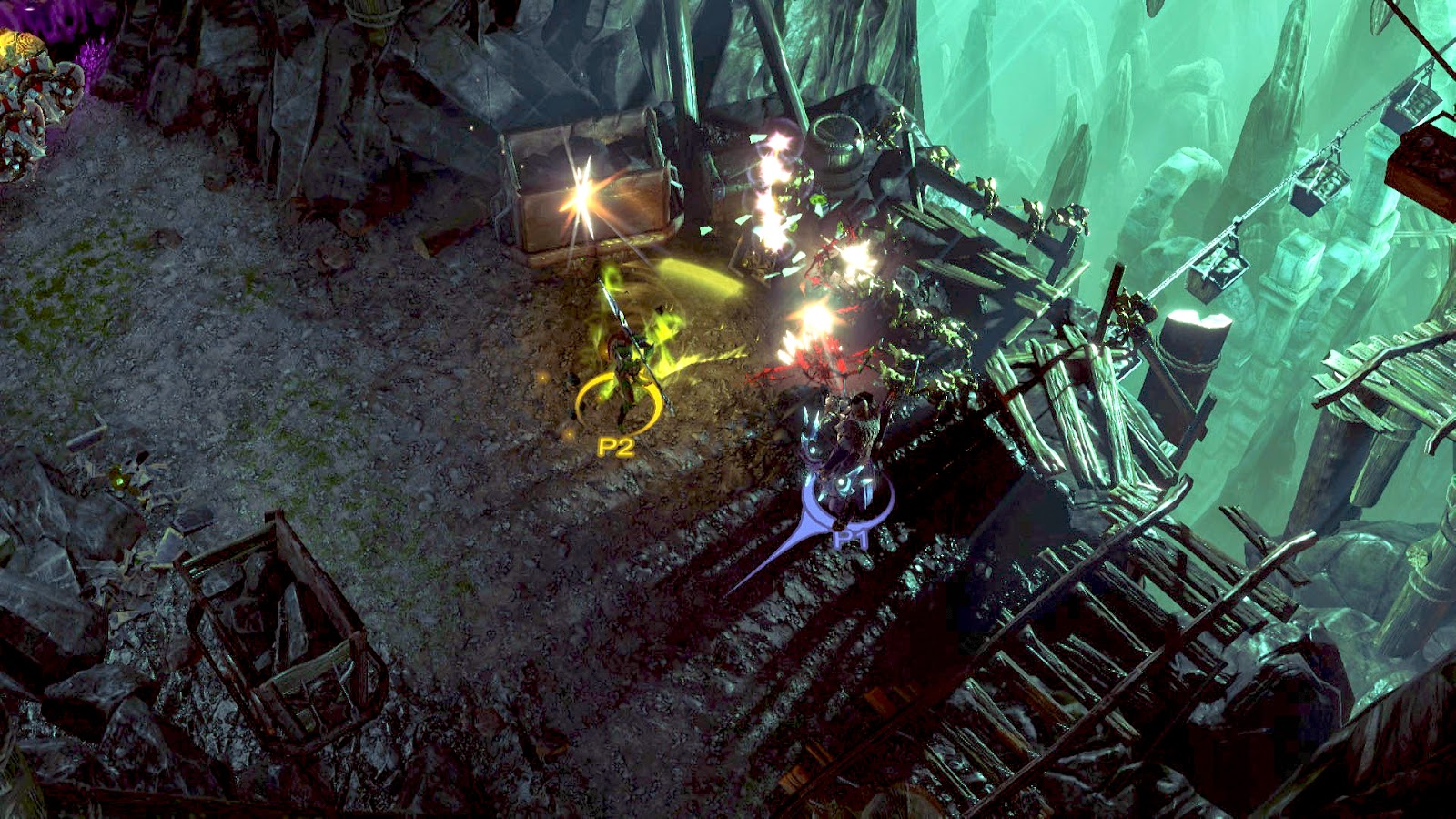 I did the unthinkable. I muted the game and ignored a majority of the in-mission “comedic banter” and I was stunned speechless. Here was an entirely new game; a strong, vibrant, gorgeous action RPG that I did not know I wanted as bad as I do now. In my mind’s ear I could hear the crushing blows of my spear, the devastating explosions of magic, pain, and revenge. Here I felt like a true hero, fighting for kind and country, summoning the will to live, to fight on, to liberate my fellow man, to protect the weak, and mete justice to the unjust. All because I pressed “Mute.”  Thinking back onto some of the different missions brings chills to my arms when I use my own sound effects, the little “pew-pews” and “squish squish” as I rain death amongst the evildoers invading your world. The game is excellent (even if it is linear) and is an entirely new experience when played without one the features of what I believe is a pinnacle of gameplay experience; with no audio. I was rocked again, this time in the same manner as when I was smashed in the face with a baseball bat (true story); I was dazed, confused, and more than a little lost. I did not know how to react but the first wave of baddies, I was hooked.

As I mentioned previously, it’s complicated. Sacred 3 visually is excellent, has some of the best controls I have had the pleasure of using, and has a very linear storyline with little depth, what really got me was the audio; I just cannot stand it. If I were to rate Sacred 3 solely based on the audio I might as well hang up my quill and ink now, but I know that a game is more than just the sum of its audio and with Sacred 3 that could not be more true. Once I eliminated that which grated me most, I found a fast-paced, fun, and wildly addictive game that with a bit more aural engineering (well, okay, a LOT of aural engineering) could be a solid action RPG that would fit well within any fan of the genre’s library of games. As it is, it still has a ways to go to be included in the libraries of more than just fans of the series. Barring the terrible audio I actually found myself having more fun in Sacred 3 at times than I did in Diablo III when it released; addressing the audio in Sacred 3 would be a massively uplifting update and I would love to see that happen.