I had been keeping one eyeball on the release information regarding Spintires as it was of pretty great interest to me. I am a big fan of any type of racing or car-based video games, as they tend to provide a good mixture of simulation and excitement. When I first heard of Spintires I was quite intrigued, as it was not a true simulator nor was it a racing game, so I continually asked myself “What is it?” When the opportunity to review it came along I naturally hopped on it and once I got the extraordinarily small game installed (the game is only about 500MB), I loaded it right up and dug into it. Spintires is certainly a unique experience. 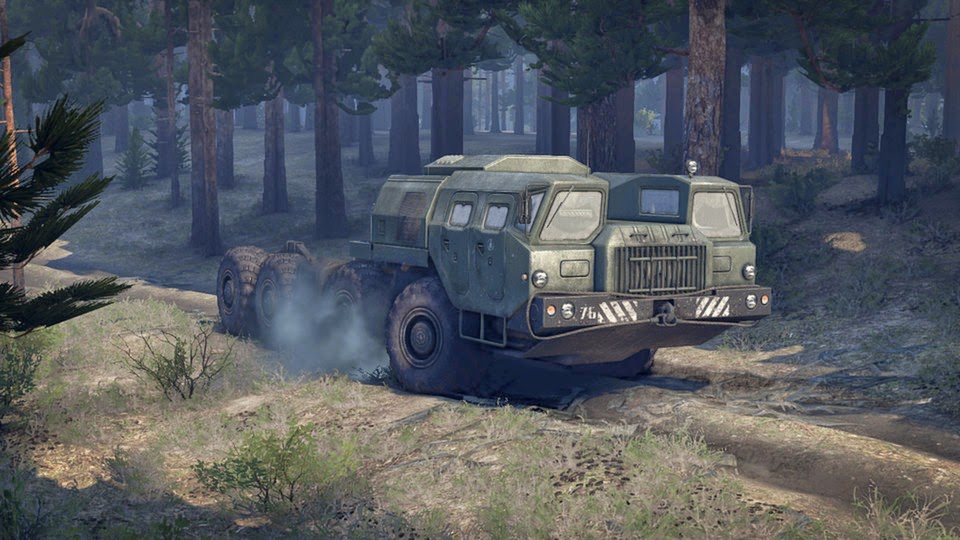 Shortly after playing the phenomenal and extremely gorgeous racing simulation, Forza Motorsports 5 on the XBox One, it is hard to look at some of the other racing / car games out there. Fortunately Spintires is graphically stunning with long draw distance, excellent detail, and some of the neatest simulated mud that I have ever seen. The way that dirt and water move around your slightly flat tires is mesmerizing; I do not believe I have ever seen water or mud move like this in a video game. On top of that, the tires of your vehicles are all slightly flat or rather, they are low on air (as you would have if you were mudding in real life) and the animation for the low tires is spectacular; there were times where I could sit and watch those tires roll over squishy terrain and just be wowed.

As I previously mentioned, the draw distance is quite impressive for such a small and lightweight game, however the Level of Detail does not match with the quality of the distance, which brings about an odd pop-in of graphics that can be a bit discombobulating. While the mud / dirt and the water is fun to drive through, I found that it would be very easy to get stuck on top of something whether I was in the mud or the water or even the grassy areas. That something would turn out to be nothing since a moment or to worth of ‘rocking’ the truck back and forth would find me driving through the exact same spot with no difficulties at all.

One of the more difficult aspects of Spintires is the camera angles that you can choose. None of them are very good, as there is no camera view directly behind the vehicle; instead it is always of to a three-quarters view and it does not help the already precarious steering. A three-quarter view would not be so bad in a stock car racing game, since they only make left turns, but in a mud simulator / vehicular exploration application like Spintires, it does not do well. I would have been completely happy with an in-cab / behind the steering wheel view but unfortunately the camera angles are limited and do not really provide one with the right depth of vision, beyond always skewed to one side. Right out of the gate I may as well mention this; there is no music. None. Nada. Zip. Zero. Zilch. Just you and the diesel-sounding Soviet-era industrial trucks (oh, and a Land Rover look-alike) that cough up an ominous black cloud every time you turn the bad lad over. So when you start up Spintires be sure to have your Spotify turned on or be sure to be streaming Crunchyroll on your second monitor because the little audio that is there will become stale and monotonous within ten minutes or so. The shifting of the gears (which is done either manually, which is recommended, or automatically) sounds hollow though it does adequately portray what a real industrial-sized diesel would sound like.

As for background noise? There is not much outside of the tweeting of birds or the rush of water but you cannot turn any ambient audio up as there is a single volume slider in the Settings panel for a universal “Sound” control setting. You could, on occasion, get up to a speed that is about four steps faster than a crawl and if you have the unfortunate luck to hit something like a tree (trust me, you will be that unlucky) the resounding crunch is actually a fantastic sound. Just like the ultra-mesmerizing mud and pseudo-flat tires, the sound of the crunch was enough to keep me going back for more. Unfortunately outside of that deliciously addicting crunch the audio was sorely lacking.

With some good tunes or a fantastic anime playing in the background ( I recommend Toradora! for Rom-Com or Sword Art Online for fantasy) you can hop in your giant Soviet diesel and prepare to go tearing around the wilderness, set on exploring the world! Except you will not be zipping around, instead you will be staring at the tires of your vehicle as you slog through a muddy creek bed in complete awe as mud and earth build up around your tires. Spintires is not about speed; far from it. I fully believe that Spintires is a mud simulator with some driving-based exploration thrown in on the side. 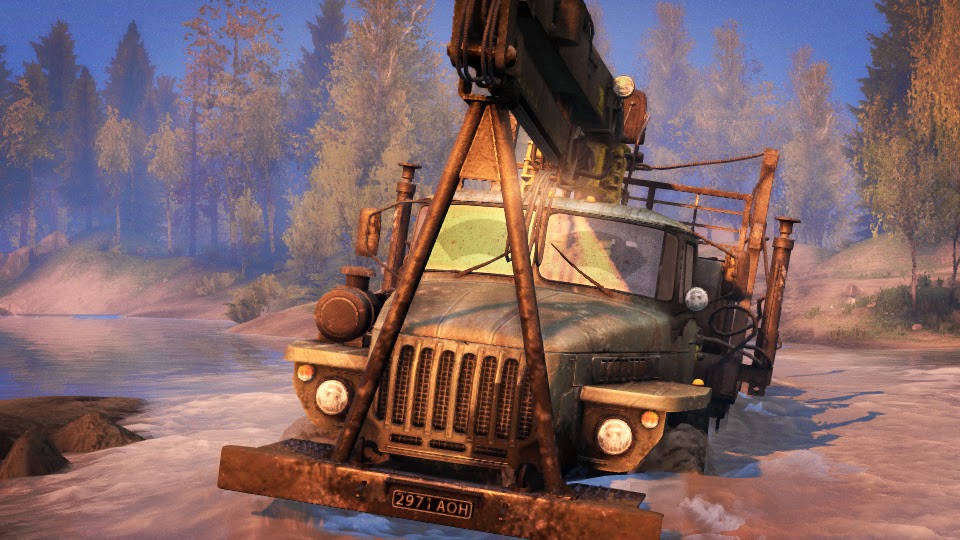 There is no real point in Spintires except to head out for a frustrating drive through the wilderness where you will accrue damage to your vehicle for just driving through some of the mud, or you will be scooting along tearing up the fields when suddenly you’re booted out because you ran out of fuel. I made mention earlier in the article about recommending the manual transmission and I still recommend it, whether you generally enjoy playing a manual in games or not. That is because the “automatic” setting in Spintires is about as dumb as a box of rocks. You see, there are a grand total of three gears; you have Reverse, Low, and High. In its defense, the auto transmission does get reverse right, but more often than not when I was in auto mode, well, I stalled. All the time. I finally got fed up and switched to the manual mode (on a side note, both of my real-world cars are manual transmission) I was suddenly able to get through some of the deeper mud or heaven forbid I try to drive through a river in auto as it decides to flood itself (with a manual? No problem).

Spintires is an extremely unique experience and if you go into the game with no expectations you will likely be happily surprised at what you find. There are a number of things that I think could have been done better, such as the “tutorial” that was just an explosion of tiny text boxes all over the screen that did not really do much for you. You do have the option to customize items such as the trailer or whether your tires have chains on them or not (by the way, chains don’t help in the mud) though it feels a bit tacked on. In all honesty any of the features, from the customizable parts to the automatic or manual transmission simply feel “tacked on.”

All in all though, Spintires successfully provides the entertaining, if simple, experience of driving a giant Soviet diesel truck through piles of mud and small rivers. I am personally not sad at seeing Spintires in my gaming library, nor do I feel like the time I spent in game was lost; I just am not overly excited about going back in and playing, though if the mood strikes where I just want to cruise along the wilderness, I will likely start Spintires back up.