Graphically you will be running into the same quality textures from the core game, though there are plenty of new models of amazing creatures that are capable of crushing your whee-little character and wee-little you will be, since nearly every one of these models will be at least half-again as large. While the new models look great and articulate well, the real beauty lies in the environment; stunning, wide-open vistas of the mountains surrounding the Iron Keep lend a sense of scale in this massive world. Running across your first chain is both a beautiful site and a nerve-wracking experience. More than once I was concerned that I would need to fight on one of those chains and trust me, unless you have a tower shield and a spear, you would not want to even think of it.

These wide, open-air environments felt new, and a bit more refined than the core games’ more “open” areas. In the core title, Heide’s Tower of Flame and the Dragon Shrine are the more ‘open’ areas, having sharp-looking skyboxes and a less restrictive feel to them as opposed to something like Drangleic Castle or Shrine of Amana. In the first DLC, Crown of the Sunken King, the environment was close, stifling, and added a level of creepiness that fit well with the motif; with Crown of the Old Iron Key the open air and large environments lend a sense of grandeur that will cause you to lower your guard … only to be crushed by a leaping skeletal guard. I honestly enjoyed the open-air feel so much that I have re-run the areas in Crown of the Old Iron King so many times I know the map by heart; it just felt new and refreshing. 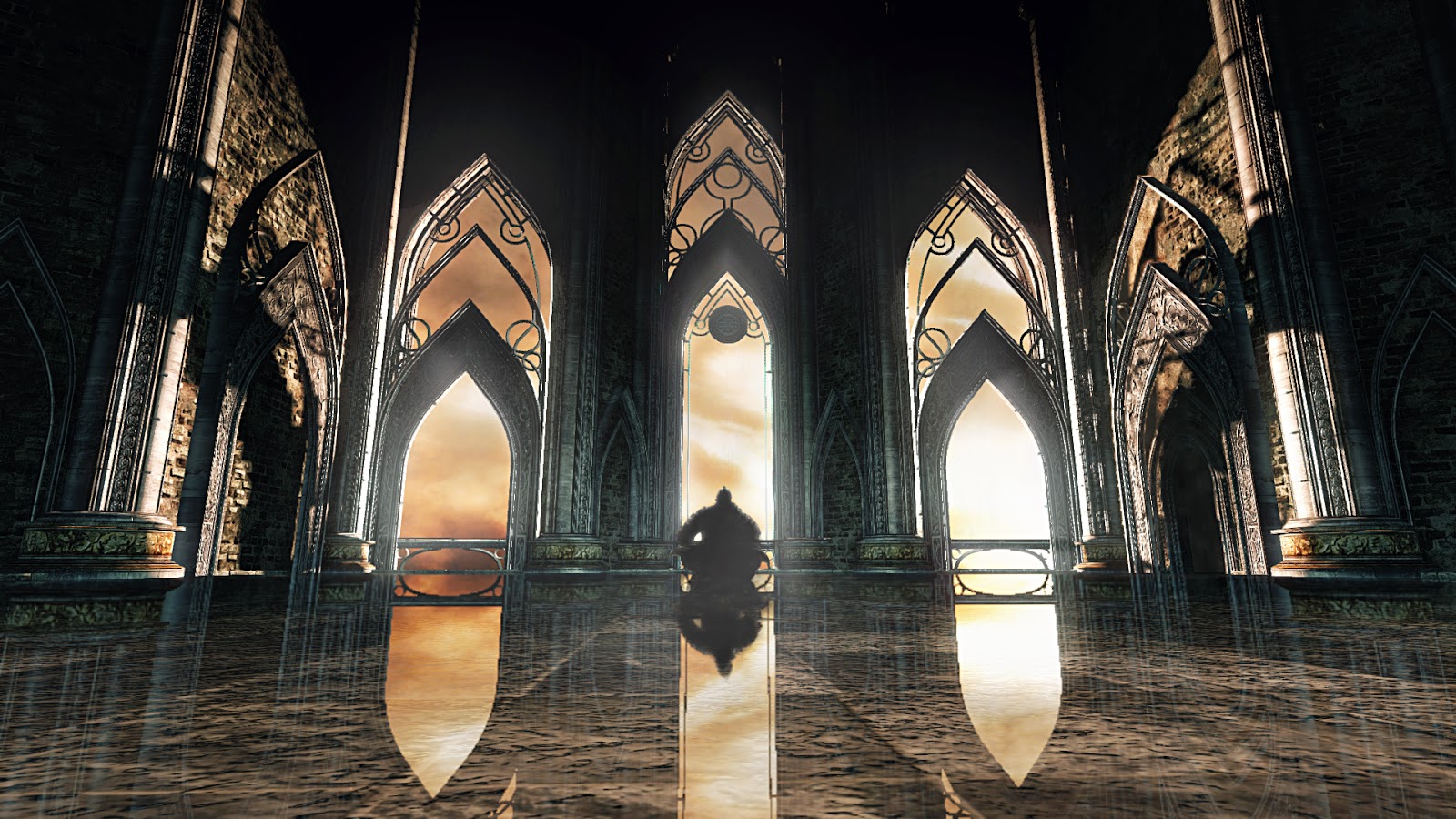 As some of you may know, Dark Souls 2 is kind of a hit around here. We have had numerous reviews of From Software’s sequel to the massively popular Dark Souls that was released a few years back and you can find our reviews for Dark Souls 2 here and here, and the first DLC, Crown of the Sunken King here. Well, From Software is back with their second DLC of the expected three, this one being the Crown of the Iron King. This second pack includes a few new maps, new bosses, weapons and armor, so ambitious Undead will have plenty to do in Crown of the Old Iron King. Now, I personally have sunk upwards of 110 hours into Dark Souls and its first DLC, Crown of the Sunken King, so I am eager to see what else is in store for me, after all I can easily say that Dark Souls 2 is my favorite game of 2014.

I am a late comer to the series though, I did not play Demons Souls until July of 2013, well after it released, and then did not get into Dark Souls until I finally found it on a Steam sale. Unfortunately with Dark Souls: Prepare to Die Edition, well, there were a few problems with the PC release so it took some time and a lot of determination to get into it; as I happily reported here in my Dark Souls 2, the new release runs fantastically on my computer. When Dark Souls 2 originally released I was fresh off of the original Dark Souls and was ready for more punishment and since Dark Souls 2’s release, From Software has kept the punishment flowing by releasing Crown of the Sunken King; the question now is whether they can keep the streak alive with another excellent release. 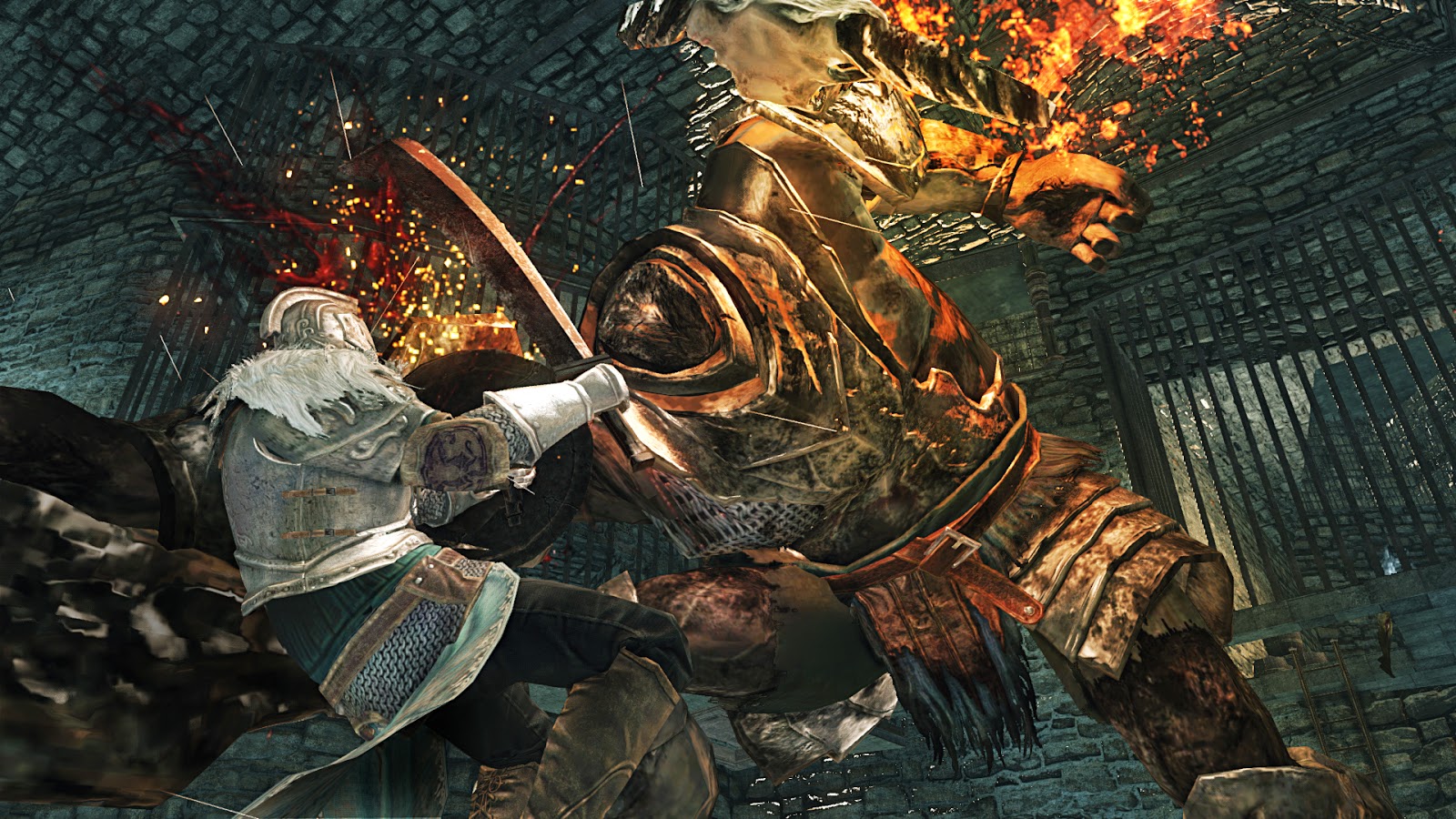 So this is where I struggle a bit; the audio. In the core game, the audio is awesome, spectacular even and with an excellent set of headphones or speakers, you will be bombarded with a stunning array of audio; from the slight jingling of your armor as you step to the far off sounds of a hollow scraping inevitably towards you with one mission in mind; to destroy you. With the Crown of the Sunken King the deep caverns that were the areas that you were moving through lent a creepy atmosphere along with the gross skittering of the puss-filled monsters. However, Crown of the Old Iron King brings nothing new to the table and simply recycles the old audio from the core game. While this is not a bad thin by any means, the first DLC set something of a precedent by having new and interesting audio but this second entry does not. When I first stepped out into Blume Tower I was awed by the grandiose scene in front of me. The soaring towers connected by massive chains could have used the sound of sweeping winds and soaring creatures, something akin to what you found in Dragon Aerie. Instead though, you are assaulted with white noise and an equal eerie sense of nothingness; honestly it is hard to tell whether it is designed to be that way or it was a missed opportunity.

I believe that the disjointed feeling between the audio and the overall aesthetic is a missed opportunity to bring something truly magnificent to the table. There are other locations included in the DLC and they too seem to be a bit flat or hollow (see what I did there?); as an example there is a network of caves and caverns that you traverse as you are on your way to one of the easier DLC bosses (the Magic Smelter Demon, a slight recycle of the Demon Smelter optional boss in the Iron Keep). You would expect some echoing, possible some drips and crumbling sounds, kind of like what you find in the Black Gulch, but no, it is awkwardly silent with the exception of the sounds of the enemy as you enter an area. It is a bit dismaying that the audio seems to have been handled a bit poorly in comparison to the rest of the pack, which is full of spectacular moments.

Looking back, the one thing that amazes me most about Crown of the Old Iron King is the sheer size of it. Soaring towers, giant rooms, wide corridors, the levels and environments above-ground in the DLC just feel big. When you ride the elevator up from the Iron Keep, you are let out onto a broken-down brick precipice with naught but this massive chain leading off into the distance. A bit of anxiety and panic kicked in when I stepped out, all that was around was a giant and very narrow chain leading from the platform I was on to a point on a tower well distant from where I was. Running across these chains is a nerve-wracking experience. As I ran across I was continually concerned that I would be attacked and being a dex-build, the absolute last thing I want is to be invaded on a path that allows absolutely no maneuverability; I would be smoked. Fortunately there are relatively few enemies around the chains so it is not as harrowing as it could be but still, it is a stressful moment as you run along these chains to move from one tower to the next. I was fortunate that the one time I was invaded while amongst the chains that I was able to get off them as soon as I saw I was being invaded; I simply ran right beyond the red and used the Force spell to toss him off the tower; simple really and super extra hilarious. 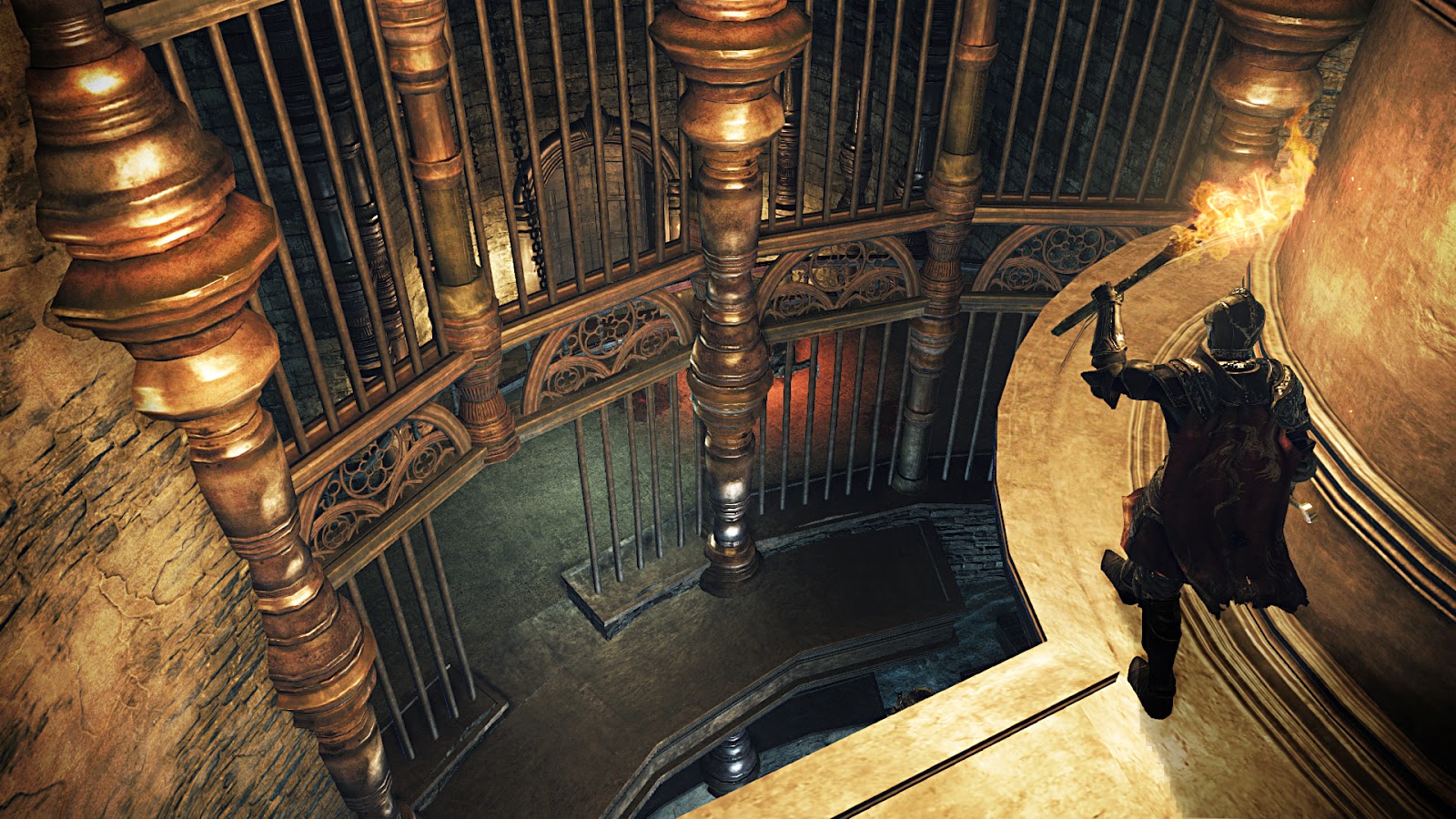 As a dex-build I found that Crown of the Old Iron King was much more manageable than other areas in Dark Souls so I decided to work a bit in a strength-build and it exponentially increased the difficulty. Now, it may be that I was simply not used to playing a strength based character, but man some of those new enemies hit HARD. I would watch as my stamina and health were sapped with equally punishing blows. Though, as a dex-build I had to, on the Magic Smelter Demon, switch entirely to my +10 Steel Armor set and my +10 Drakekeeper great shield just so I could soak up the hits that he would dish out. That fight is one of attrition, I let my two summons rush in and keep the attention off of me while I worked to just chip away at his health; it was one of the longer fights I have been in. For the most part though, the majority of the boss fights can be easily handled if you are able to dodge; the Fume Knight, perhaps the most frustrating boss I have encountered in any of From Software’s games, was eventually whittled down by dodge, strike, dodge. It simply took ages and careful timing and oodles of patience.

Overall Crown of the Old Iron King’s merits far outweigh the lack of spectacular audio; huge environments, new massive enemies, numerous boss fights all lend weight to the fact that the latest DLC was more than just a quest or two, but a full on expansion experience with plenty to do and even more to see. While I personally would have liked to see more audio, or new audio at the least, what is there fits with the motif and fuels the Undead as they are ushered through this wonderful storyline. I for one cannot wait to see what Crown of the Ivory King and if the previous two DLC’s are any indication of what is to come then I believe that we are in for a treat.