comments Share
You are reading
Dungeon of the Endless – PC Preview

TagsAMPLITUDE Studios, Dungeon of the Endless, News and Previews, pc

I have had zero exposure to the ‘roguelike’ genre as it stands today; I generally reserve my time for pure strategy games or more traditional roleplaying games. When roguelike’s and roguelike-like’s became popular I just was not into the whole thing and have resisted them quite well all along. Truthfully if it were not for my loyalty to Amplitude Studios I would likely never have considered playing a roguelike. However Amplitude Studios, the development studio behind the absolutely wonderful Endless Space and the equally awesome (so far) Endless Legend, has proven to me that they are a solid dev team and that they really hold their fans in high regard so I wanted to give my first roguelike experience to them. 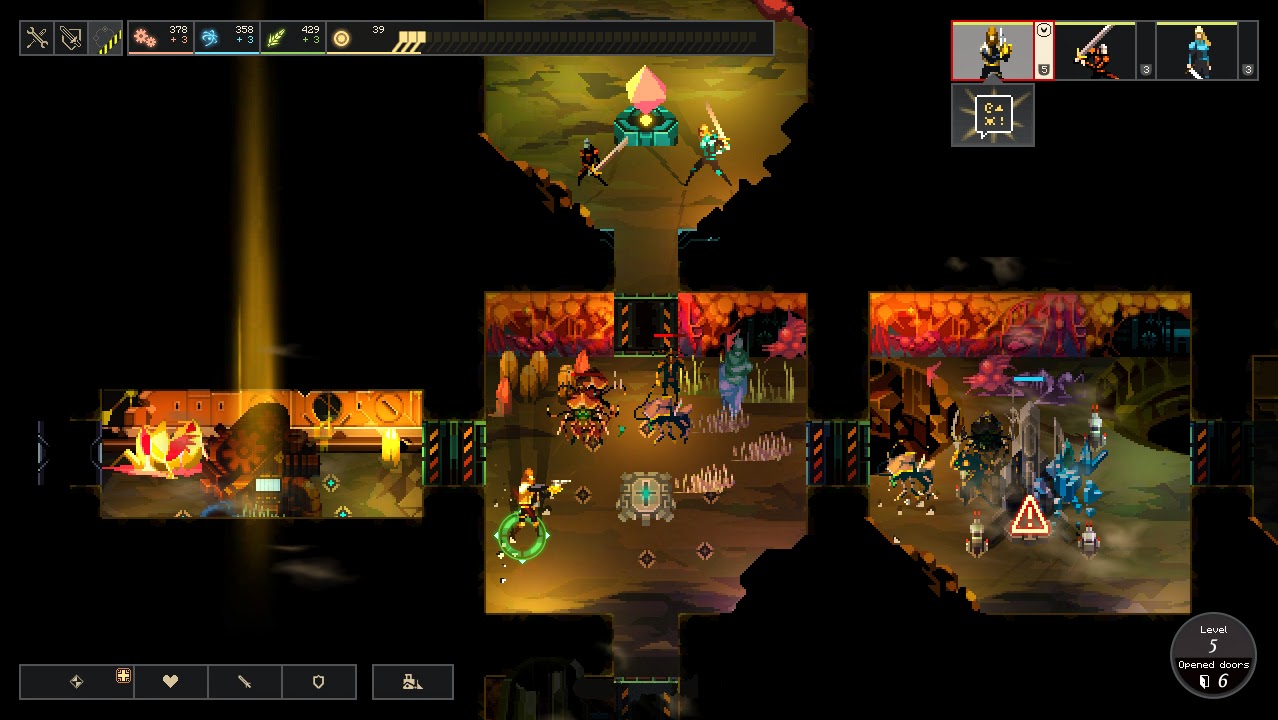 In many ways I am glad that it is Amplitude Studios that is developing Dungeon of the Endless; they listen to their gamers, take to heart the feedback, and do whatever they can to make their customers a part of the development process as a whole. Not many studios go that far out of their way to listen to their fans, but Amplitude will. It is that reason alone that I decided to go against my better judgment and try a roguelike game. Now Dungeon of the Endless is not a true roguelike as some others are; there are neat little elements, from RPG to RTS to Strategy bits thrown in throughout the game. This is why I decided to go through and try it out; it is not just a wicked-difficult grind-fest with naught but loot-chasing in mind and it had elements that other similar games did not. It made the game unique and if my first run in a roguelike is with a unique title then all the better. After starting up and playing Dungeon of the Endless for a few dozen (painful) hours, here is what I have found but remember, this is an Early Access preview so many things may change.

Now, I am going to step back a bit and start off by warning everyone; this preview will be a bit more technical in nature as I discovered that I absolutely abhor the roguelike genre. As much as I wanted to really give the genre a try by hopping on the chance to play one of my favorite studio’s titles, I unequivocally detest the genre. It just does not click with me and I just have no fun with the type of game which is not unique, I personally cannot stand MOBAs and you would rarely, if ever even see me consider a MOBA. That said, the different aspects of Dungeon of the Endless, like the RTS-style gameplay of moving a crystal around and providing some types of level-ups or the leveling of characters that you find throughout the dungeon are really great. Individually I enjoy those types of games immensely, heck when you combine those two, as Blizzard did with the launch of Warcraft III: The Reign of Chaos, it was stupendous. 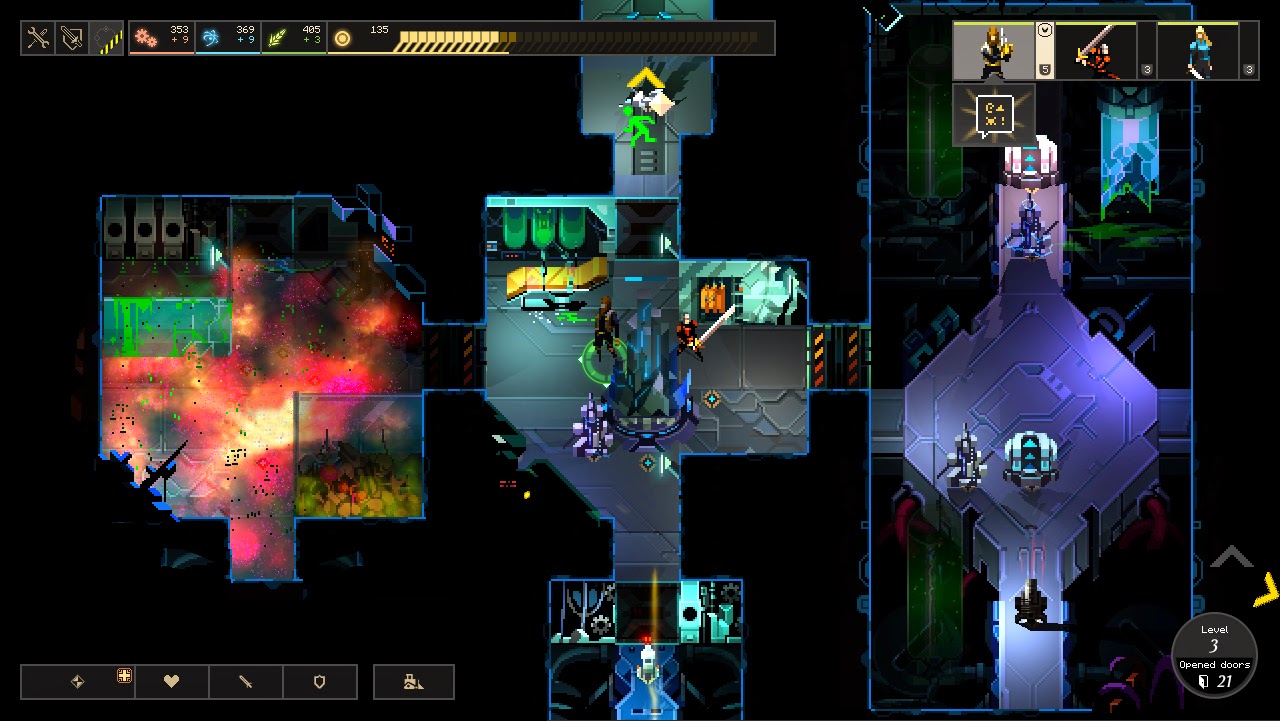 When you add in a procedurally generated dungeon with no story except “survive to get out, find phat lootz” the way the roguelikes do, well it is just a terrible mix in my opinion. Dungeon of the Endless though, does a very fine job of easing new and old users into the swing of things with a pace that plays out similar to Maurice Ravel’s Bolero. With a slow, almost calming start, your pixelated warriors, amazons, robots, or other strange denizens of the dungeon will move out and cautiously explore the uncharted dungeons while fighting enemies (and dying; lots of dying) and discovering treasure. Like any good dungeon crawler you will have swarms of itty-bitty bad guys running up on you in an attempt to crush you and your crystal pylon (which is your generator), however you do not need to go into a Diablo-esque click frenzy; just let your peeps do their thing. The only micromanaging is really when it comes to healing and such. Outside of that, they move on from one baddie to the next.

I found that I would get bored simply trying to heal someone only to watch them get splattered if more than two enemies ever attacked them at a time. I mean, if I wanted to play a healer I would go back to World of Warcraft and start one up; at least there I can talk to people. It is not a knock against Dungeon of the Endless itself, but the genre as a whole. Truthfully the genre feels like it was created in a way to simply provide “busy work” to gamers. I do not like it, even for all of the great feature Amplitude has put into the title; it is simply unappealing and Dungeon of the Endless is no different. Other than opening doors, hauling your crystal pylon around, healing/leveling/equipping or grabbing loot, you cannot even really control your little minions (as in, click-there-go-there control as they will simply enter a room and do their own thing). It is odd and feels awkward, though that my be my own inexperience with the genre speaking.

While I may not like the gameplay (that is my opinion, by all means, go try it and see for yourself because anyone I have talked to loves the style of game that Dungeon of the Endless is) I am absolutely in love with the art style. The pixel-y little sprite-like effects that run at about a trillion frames per second are simply gorgeous. Not in a retro-style flashy Super Nintendo-era which is generally awesome, but something more. It is difficult to explain but there is something about Dungeon of the Endless’ lack of detail that provides a high level of … detail (oxymoron, I know). Characters without strong features seem more human or alive than some of the far more photo-realistic titles out there. The way they move is clean and well animated with bright and vibrant colors. Lighting effects though, while nice leave a little to be desired. There is very little bloom effect and the lighting seems to be either there or not; no middle ground. On the other hand the shadows are excellent so it is just a strange and alien feel. 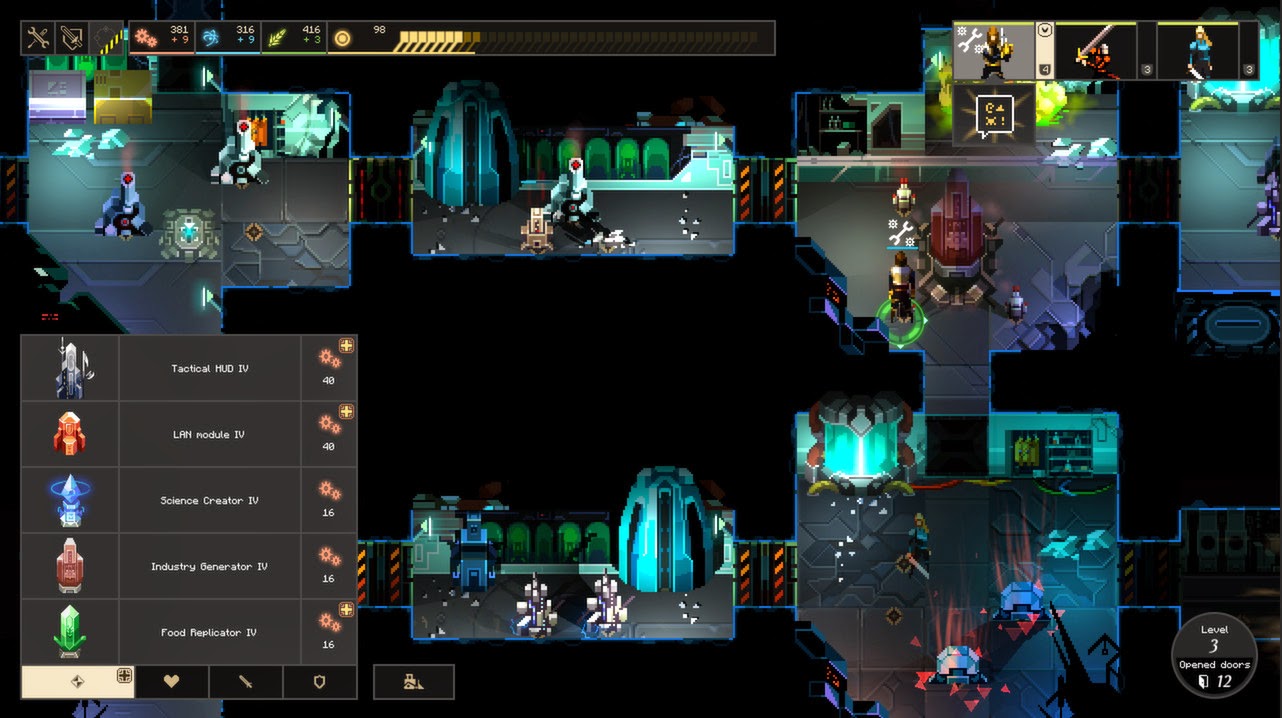 That may change though, as more updates are bound to come yielding updates to gameplay, graphics, mechanics and AI performance. The graphics are certainly a charming aspect and as you go deeper into the dungeon you will find more outlandish and alien creatures which adds to the overall feel that you truly are in a forgotten world. On the same vein of excellent video, the audio is refreshing. The oppressive atmosphere that is created via visual aspects is lightened by retro-style sound effects. All of the classic bloops, bleeps, honks, bonks, and ka-pows are in full force and work to add a little relief from the gravity of the situation. Background music is suitably Close Encounters of the Third Kind-esque and help reinforce the overall alien feel to the whole game an adds another level of immersion. The combination of the contrasting visuals and audio style works quite well together.

All in all I can safely say that I am not a fan of roguelikes but I can say that I am a fan of the different aspects that make up a roguelike. Dungeon of the Endless brings together some of the best elements from Tower defense, squad-based dungeon crawling, RPG, RTS, and strategy titles and sticks them into a package with a unique art style and some groovy tunes and tones. Individually I love all of those titles and find them to be amongst my favorite genres. While I trust and adore Amplitude Studios, Dungeon of the Endless wraps them all up into a single game, does so in a manner that I do not find interesting. Others here certainly do and find it to be an excellent evolution of the genre as it has fantastic balance, a wickedly awesome crescendo-style increase to suspense, adrenaline and complexity. Fans of the roguelike genre, and to an extent even those of the MOBA genre will certainly find something to like here; nay something to love.

I just happen to not be a fan of those titles. Mechanically, even for an Early Access title, Dungeon of the Endless is one of the most complete games I have played pre-release (a common theme with Amplitude Studios) with solid combat, exception audio and graphics, and fleshed out content and I strongly recommend it for newcomers to the roguelike and to veterans alike and at this stage in the development cycle, I recommend you head over to Steam to pick it up. 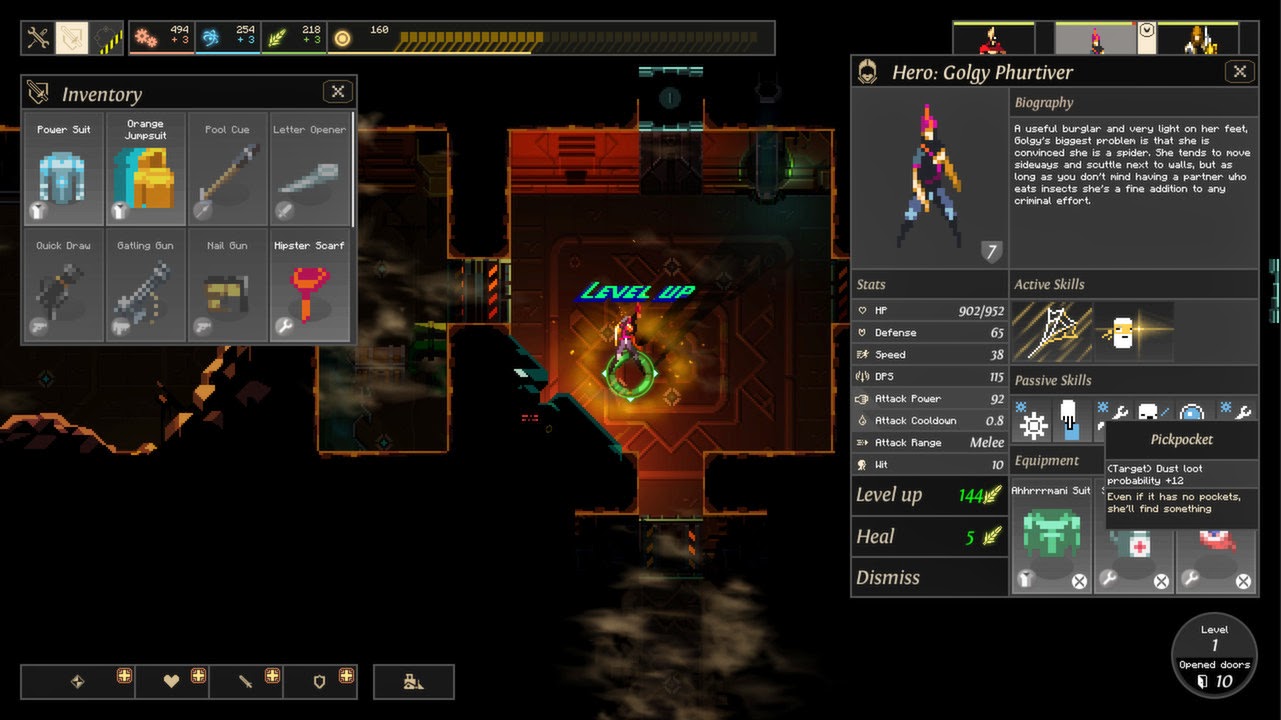