Amplitude Studios, the developers for Endless Legends, are also the developers for a spectacular 4X game called Endless Space, which as the title implies, is in space (one of my favorite environments ever) and covers galactic domination. Frankly it is awesome and any fan of strategy gaming has to play it as Amplitude Studios came out of left field and fell upon the unsuspecting population with a breakout hit in Endless Space, proving to gamers the world over that they had the chops to stand against greats like Stardock’s Galactic Civilization, Sid Meijer’s Alpha Centauri, Distant Worlds  or the Master of Orion series. Amplitude Studios, coming off of the immense success of Endless Space and its DLC, Disharmony, they decided to flex their strategy muscles and enter the wild world of fantasy with Endless Legends. While the strategy genre is not new to them, Amplitude Studios wanted to be a bit different to begin with, something to differentiate themselves from other fantasy-based strategy games. 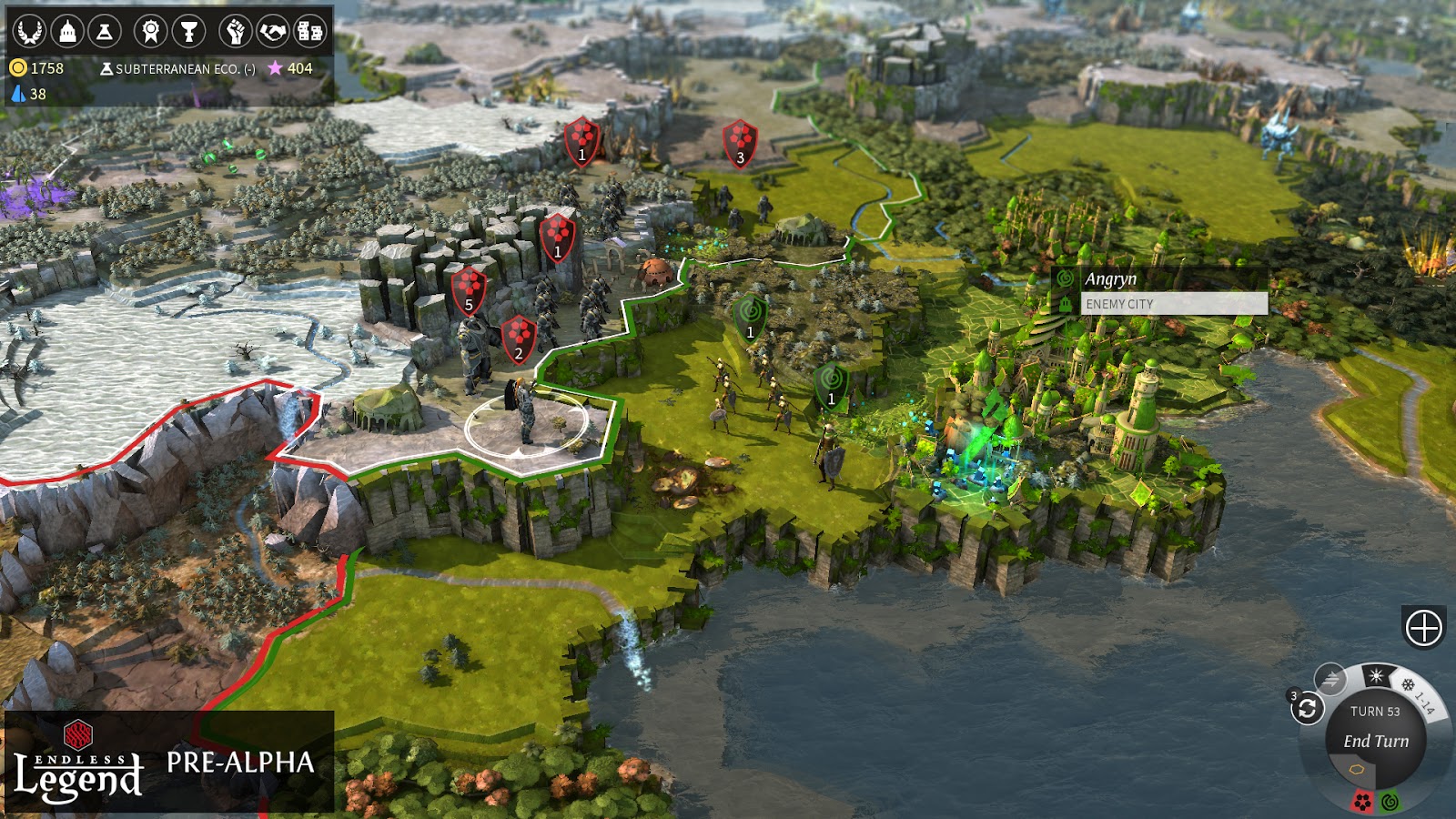 What they did was hold a competition that allowed their fans to create a new faction which is normally something you would see in a non-crowd funded game. The competition was a great success and I think it speaks volumes about how invested Amplitude is into not only their products, but their customers. With Endless Legends they are taking a step that is much farther than any other developers out there; they are truly listening to their fans and the kicker is that you do not need to purchase a founders pack to have input. The Endless Legends forums are utterly filled with fantastic posts and ideas and the Amplitude community managers and “power’s that be” are extremely active. As a gamer I am extremely moved that the folks that developed one of my favorite games of all time, really want my opinion, and they take it to heart. To them this is personal and it shows in a big way by their interactions with the collective ‘us,’ the question though, is whether it translates well into the game.

So one of the common themes amongst most strategies titles like Endless Legends, Heroes of Might & Magic, or Civilization is the art. Since you are not necessarily in an action heavy role where 3D units and environments are a must-have, developers drive the narrative with paintings or still images in the same manner as a graphic novel. Some games use simplistic and realistic art, like Civilization but others like Endless Legends use this beautiful oil-painting style of fantasy art that really makes the game pop. My personal favorite is faction background used when you are choosing who you wish to play as, specifically the Broken Lords, magical beings that exist only as spirits and wear giant suits of Dust-enhanced armor. 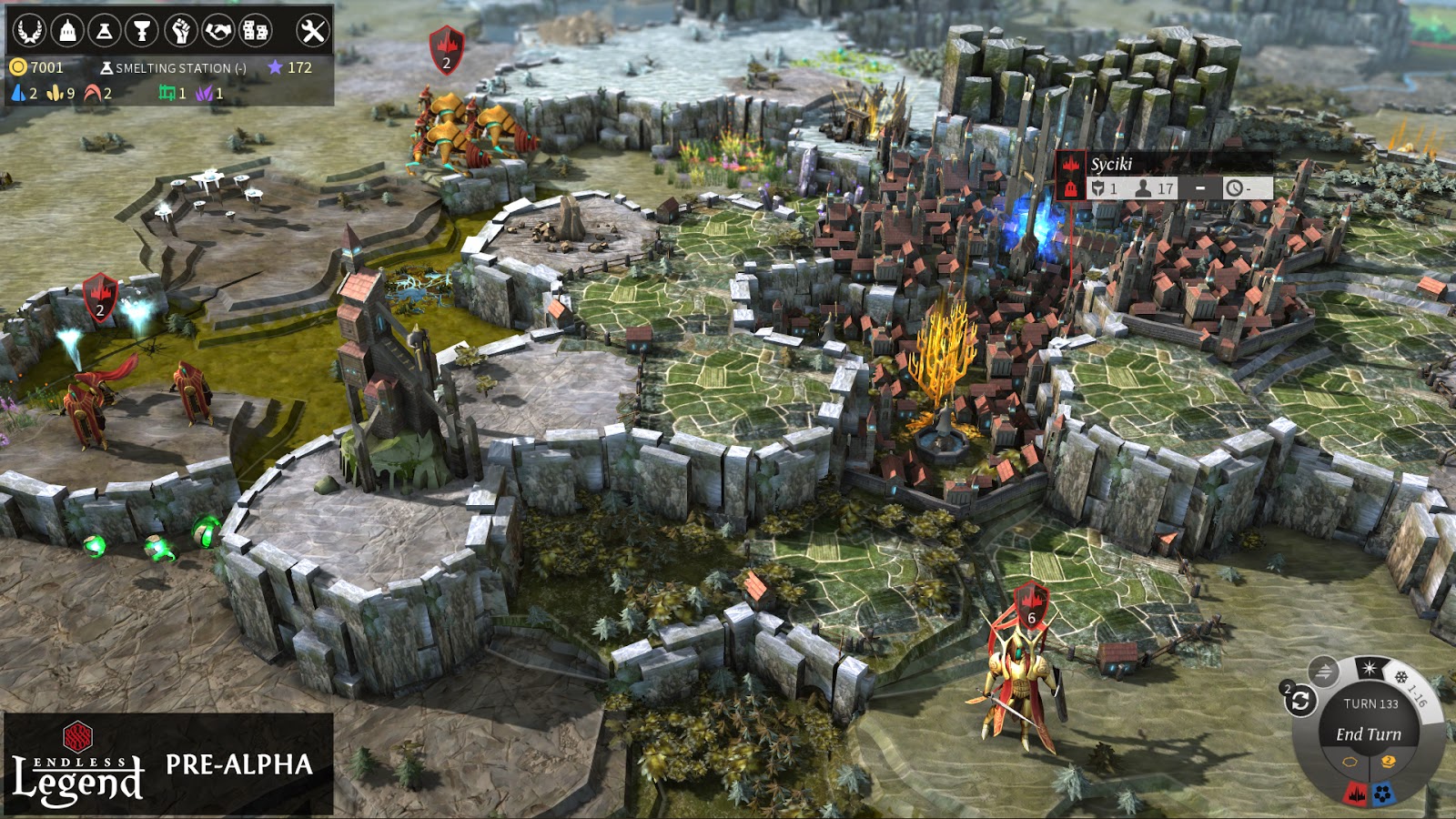 They are quite imposing and likely one of my more favored races (though, with the new Drakken faction, a race of dragons, just announced we will have to see) as their particular faction attributes fit my playstyle a bit more. While the oil painting look is excellent, once you get in game the graphics are quite breathtaking in a very unique way. The board you play on is unique and very difficult to explain, but the best way to put it is that the whole graphical feel of Endless Legend is very similar to the HBO series Game of Thrones’ introduction. Gorgeous colors and striking details grow and emerge as you clear the fog of war. Ruins, elements, an all manner of fantastical feature lay spread throughout the map and make it truly a joy to explore. Simply stated, Endless Legend sets a new graphics bar for strategy gaming.

Since Endless Legend is currently in Early Access, there may be some things that may be a bit off, fortunately the build I am using is quite complete, though there are some little audio oddities here and there. Before I get to them, though, I want to mention that the menu music and effects are pretty darn great and really bring a ‘heavy’ feeling to the game without being over-bearing. It is excellently orchestrated and compares well with Amplitude Studio’s previous reigning champion, Endless Space. Clean and crisp the music sounds great and I cannot wait to hear more. I did find that while in the game, the overview seemed quiet; really quiet. Some sound effects are there, others are either not there or they are really quiet; I have yet to determine if it is a lack of audio track due to the state of the early access. Once I am able to determine more, I may update you, but as it stands it was quiet enough that I felt it important to point out. Outside of some eerily quiet points, the audio is great; combat containing all of the grunts, huffs, clangs and clashes that one could ask for, as it stands Endless Legends is shaping up to be a wonderful aural experience. 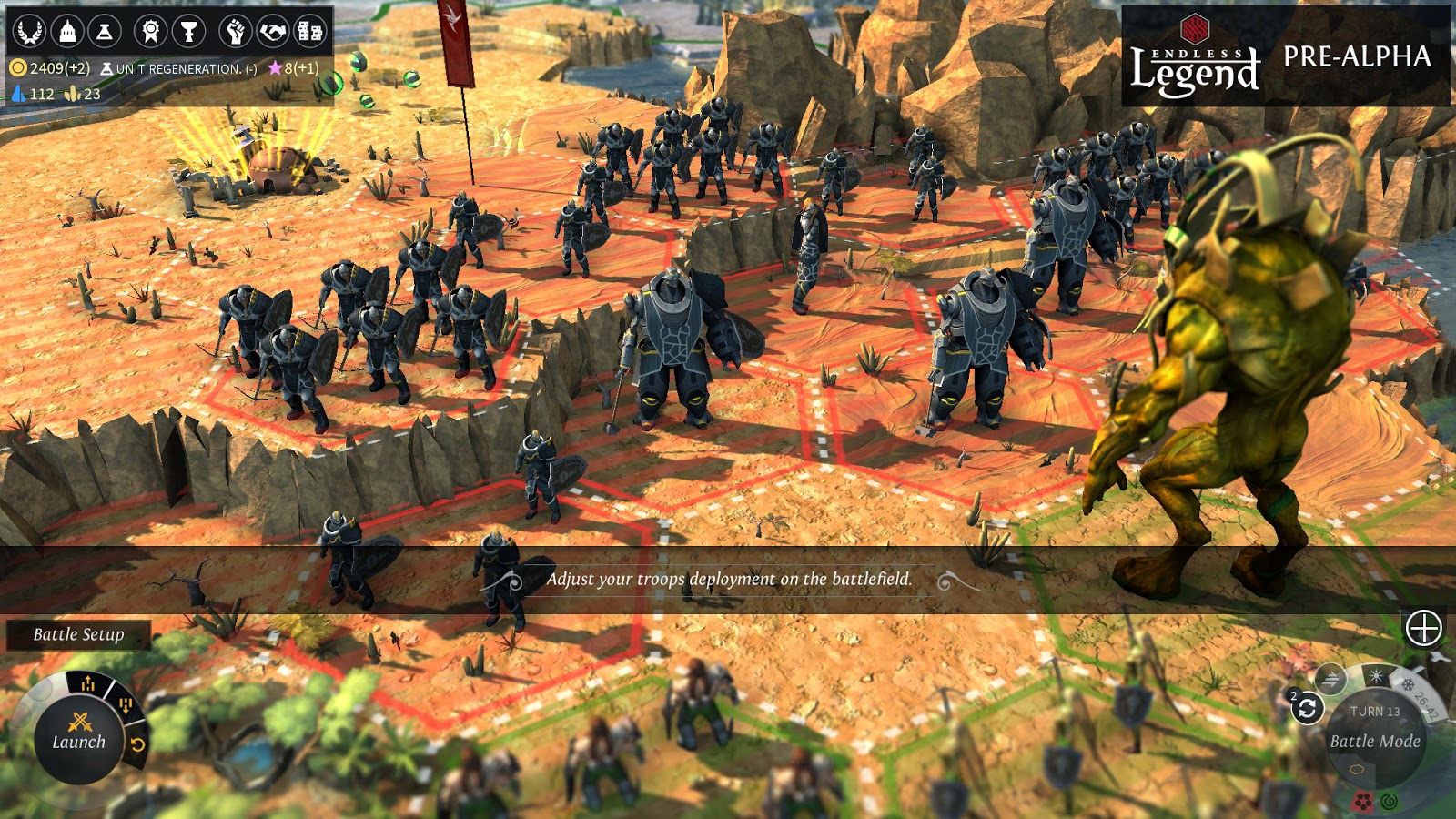 While sound and graphics are certainly important to a game, they are not necessarily the most important aspects of a strategy game but they certainly help. In Endless Legend’s case, when it comes to gameplay, graphics, and sound, well, so far it’s wrapping up to be a wonderful package. Where I found some of the greater strengths was in the gameplay. Simple yet extremely deep, engaging but not overwhelming, and there is enough action to be exciting but enough tactical and diplomatic decisions to be made that Endless Legend does not fall into any one particular niche strategy genre. I do not think I have felt a game so balanced or well-rounded since Endless Space launched a few years ago. In the dozen (or three dozen) hours I have put into Endless Space I have come across nearly every scenario imaginable in a large-scale strategy game.

I have been betrayed, crushed, rallied, invaded, conquered, you name it, I have experienced it. On the other hand I have developed brilliant partnerships and uneasy alliances, betrayed my comrades, destroyed my friends and my enemies, and economically raced friend and foe alike to the finish line. While I am partial to the micromanaging of a colony’s resources, it never gets old, building a handful of armies then exploring the map and completing quests has some of the more rewarding moments in it. With some ruins that you come across you can search, then as you continue to grow you can lead more expeditions into the ruins, gathering more resources, finding enemies or locating rare and powerful items, each with their own specific quest requirements and completion terms. I found it invigorating and would love to see more of this implemented across the entire genre; having these sub-quests attached to the different environment markers adds a level of depth and enjoyability that I have not felt in quite some time. The RPG-like elements mixed in with the strategy elements just feels like a perfectly natural fit; I am thrilled that the micro-questing is implemented in such a fantastic manner. 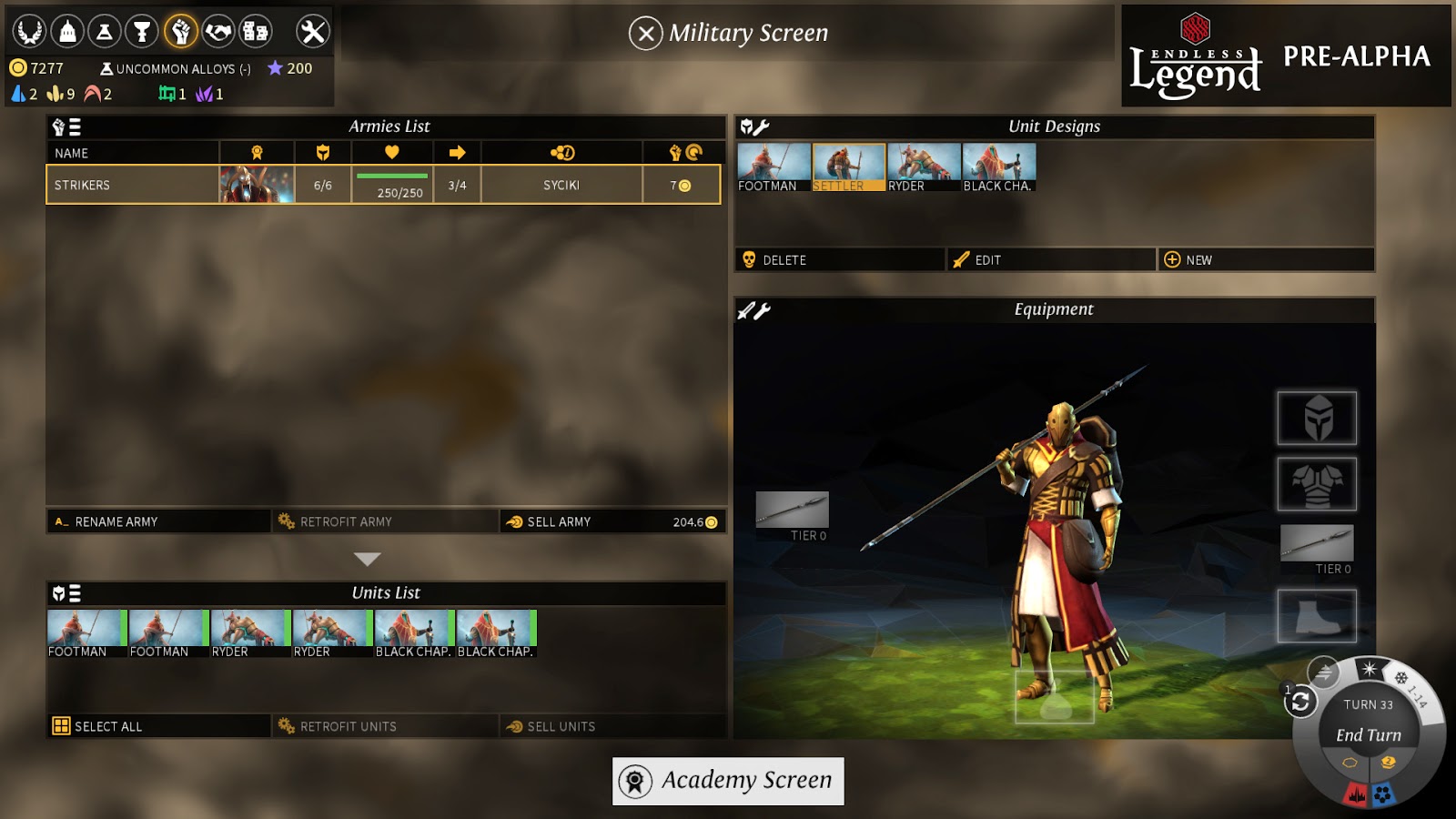 Which leads me to my final thoughts; fantastic, unique, wonderful. These terms certainly describe Endless Legend, a fantasy strategy title that is paving new grounds with its innovative and unique fog-of-war / terrain growth, to the deep level of thought required to stay two steps ahead of your enemies while appearing to stay one step behind your allies. While I personally ran into a number of issues with stability, Amplitude has released a handful of small patches as the game continues through its Early Access / Beta stage which addressed most of them. After fleshing out the content, adding more audio, sharpening up some other loose ends, Endless Legend could very well knock Endless Space out of the top spot in my list of favorite strategy titles. I for one strongly that any fan of the strategy genre heads over to Steam to pick up Endless Legend right now. I for one cannot wait for the full release.