comments Share
You are reading
Exodus of Sol – PC Preview

If I were to sit down and really ponder my favorite blanket themes for games, my absolute number one overall theme for a game is space. Whether it is a 4X strategy game like Galactic Civilizations III and Endless Space, a real time strategy game like Sins of a Solar Empire or Homeworld, a space simulation game like X3: Albion Prelude and Elite: Dangerous, a space combat game like Tachyon: The Fringe and Tie Fighter, or an action-RPG like the Mass Effect series, I absolutely love the setting. It is fairly common for me to prowl the ‘net in search of more games set in space for hours at a time, soaking up any information that I could find. Now, my particular obsession with space-based titles actually came fairly late into my gaming career; while I have always enjoyed the genre and picked up titles when I could, I was previously afflicted with a similar obsession with standard fantasy tropes (dragons, elves, dwarves, orcs, etc.) 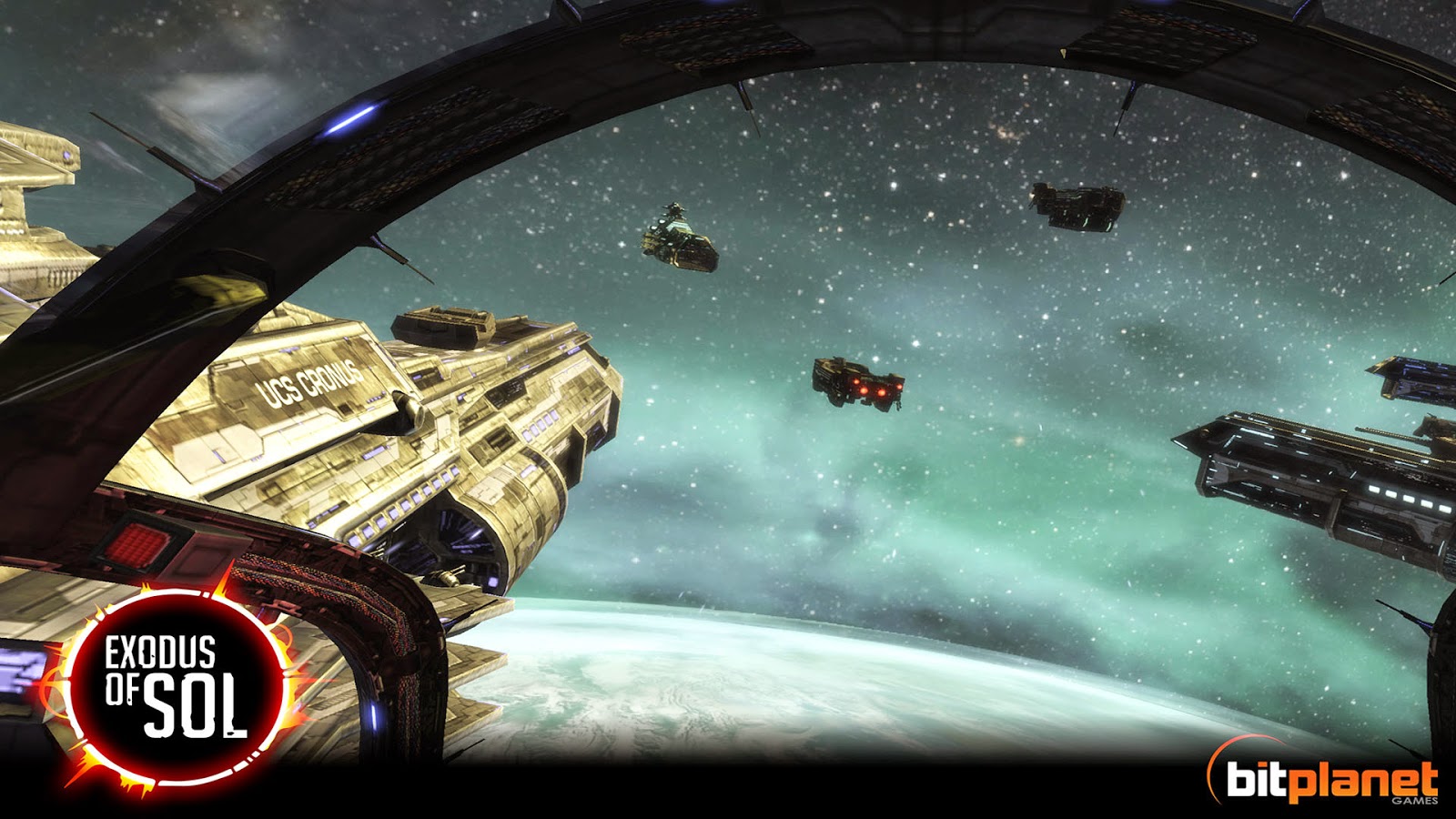 since those were the first real introductions to games that I had. As I got older and wiser (maybe…) I started picking up this obsession with the great beyond and have latched on to the genre ever since. I have likely put near on 900 hours into the Mass Effect games, playing through each numerous times, most play-throughs getting up over the 110 hour mark; other titles like Endless Space have seen playtimes in the 200-hour range but my current crown champion is X3: Albion Prelude at just over 1,100 hours. There is something about the size and scope of the universe; after all, for as much as we know it does not end. It is this unknowing factor mixed with the endless possibilities that draws me to space and titles that take place there.

Exodus of Sol is a re-imagining of the 2012 hit SOL: Exodus which released to reviews that are literally all over the board, ranging from low 40’s to upper 80’s depending on the publication. Some sites rated it low due to lack of level design, a story that felt shallow and week to repetitive missions and gameplay where others praised it for trying to revive the once-prolific space combat genre, stating that it was an excellent space dogfighting game that could be had for many times less than triple-A competitors and that every penny was worth it. Bit Planet Games, the developers for Sol: Exodus (at that time they were a part of Seamless Entertainment) seemed to feel that the initial launch of Sol: Exodus could have been far better, with a better game built more to their standards and as such, in March of 2014 announced that they (Bit Planet Games) would be regaining control of the SOL: Exodus IP and that they could now continue on with their dream of continuing the franchise.

The only problem was that Bit Planet felt that they needed to return to the core title and “fix mistakes.” While not unheard of for titles to be released, panned, then remade in a new image (Basement Crawl for one …) and re-released, it was a bit more unheard of when the originally released game was not an abomination. Still, Bit Planet Games wanted to revisit the timeline and remake SOL: Exodus in their new image; mind you they are not trying to change the style of game but rather to retell the store but as a better title. A direct line from their site says “Honestly, it’s almost an entirely new game!” (see it here) and now that Bit Planet Games’ rehash is in very Early Access, how is it turning out?

While the original game had not-terrible physics and control, Exodus of Sol boasts a new physics engine which is far more lifelike. Your craft will realistically skid through space as you work to turn quickly whereas it was a bit more like flying an actual jet in an actual atmosphere in the original release, SOL: Exodus. Amidst the upgraded physics engine a full graphical overhaul is to be had, adding higher resolution textures, cleaner models, and better shading and lighting. As the copy that I am currently play-testing is a very early build, most textures suffer from pop-in and framerates are all over the place running smooth at 60 FPS then dropping to 15 FPS for no reason. As the builds are updated, optimization is likely to occur since as it is, the graphics would be considered sub-par and the fluctuations of framerate for no apparent reason would be a deal-breaker for some. Explosions, missile controls, and smoke/debris from downed crafter are in abundance and actually a very neat thing to behold. 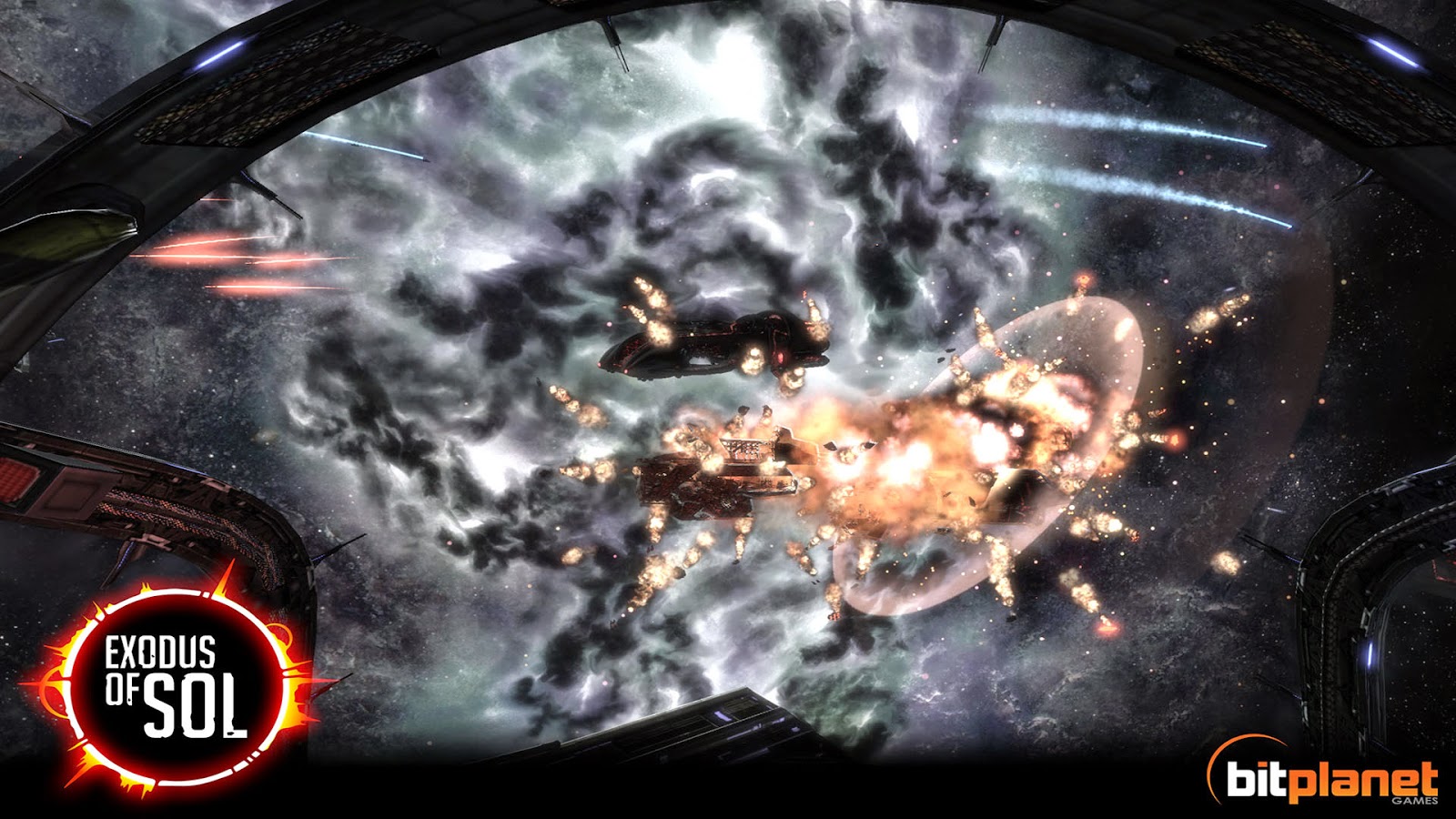 Within the first few missions there is a point where you will be about 15km out of combat and you will be able to clearly see the effects in the distance as rogue factions attack your fleet; it honestly felt a little like watching Star Wars. Shading and lighting leave a lot to be desired though, as everything is illuminated at the same level and there are relatively no flashes that lighten up the darkness of space; honestly a missile that explodes would create some sort of lighting effect that would show up against a nearby ship. Currently that does not happen, but I would love to see it added. I as actually quite impressed with the cockpit design as it is clean and a far better looking representation of a spacecraft than the HUD that was available in SOL: Exodus. Seeing the cockpit really does help with immersion and that is compounded when the cockpit shakes in different directions than your “head” when you are rocked by missile fire or you stupidly fly into something (as I am wont to do more often than not). It is a nice touch that adds just the right amount of pizazz to the game without getting in the way.

The audio needs a ton of work; at times you will have voice acting then it will simply disappear mid-mission and it gets very quiet and very confusing. I would be listening to the ship-board AI telling me what to do (with a small captions window up in the top-center of the screen) only to have her stop talking and me missing out on all sorts of pertinent information (like what I am supposed to be doing). Likely though that this is due to the early stage of development; in all honesty I have only played one other title that was this early in development (and that is still a long way off from release) so I am hoping that more audio tracks will come online as time passes. As it is, Exodus of Sol’s audio is fairly vacant, though ship sounds (like thrusters and weapons) are in full effect and sound quite well though variety would be nice. What little voice acting there is available in game hits both ends of the spectrum; your shipboard AI and Commander are well acted, but the Lt. Commander (whom you are playing) sounds like they are reading from a script and feels lifeless at times. Having a less “acted” feel to it would be good and if the current progression of audio is any sign, the voice actor is certainly getting better as they record more lines. With the way things are, I would recommend the voice actor revisit the first portion of Exodus of Sol and re-record (if possible) when they have finished the last lines of scripting; likely there will be a night and day difference.

Given Exodus of Sol is in such an early state of development, it is recommended that only those fans of the original, or fans that really want to feel a part of the development process (trust me, Bit Planet Games responds to your feedback very well) should be the ones to purchase the Early Access at this time. While an early build, Exodus of Sol is shaping up to be exactly what Bit Planet Games wanted; a re-imagining of SOL: Exodus where they had the opportunity to fix their mistakes and add new features. Give it a few more months and I am confident that the Early Access build will contain a far more cohesive game, with proper shading/lighting and more robust audio, not to mention more content. But as far as straight-up dogfighting goodness goes, Exodus of Sol is actually one of the better modern titles out there even in the early stage of development. Those of you that are more forgiving for early access titles and are willing to work with oddities in the game (like a really weird FoV and a bizarre control scheme; flight stick support is required in my opinion) and pick up Exodus of Sol on Steam will find a fun and engaging space combat game that is still young in development. 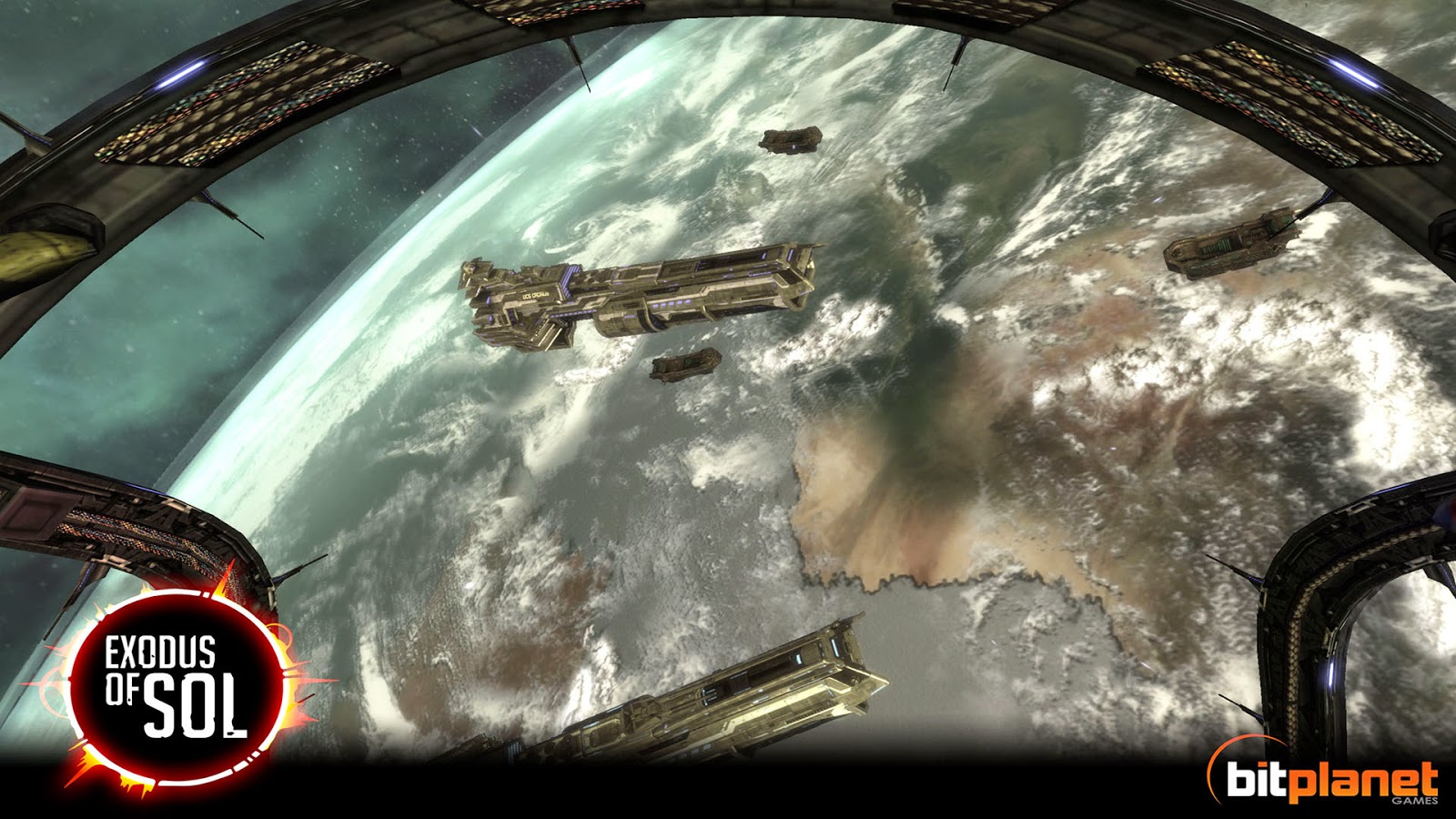