While I have been in the first person shooting scene since Doom was originally released, I did not really become invested in the genre until the late 90’s when the trifecta of FPS goodness was released. In late ’97 we had the release of id Software’s amazing Quake II which is the first of the three titles that made up the next few years of my life. Late ’98 saw the release of two games that would go on to be amongst my favorites for many years to come; Starsiege Tribes, which was my first taste of truly large scale multiplayer battles (16v16… on dial-up!) that had a strong focus on squad-based gameplay. The third title that was released spawned a new generation of gamers, games, and set a storytelling bar so incredibly high that few titles could match it, was none other than the beloved Half Life. The three of these games made such an impact on how FPS games were played; from introducing quality mouse looking and targeting to large scale multiplayer to pure mod-ability; these titles were kings of their time and have been the anchor of three generations since. As evolution is wont to do, change happened and new features like aiming down the site, vehicular combat, and destructible environments (thank you, Red Faction, for that amazing feature), FPS games began to lose focus on some of the core aspects of the genre. 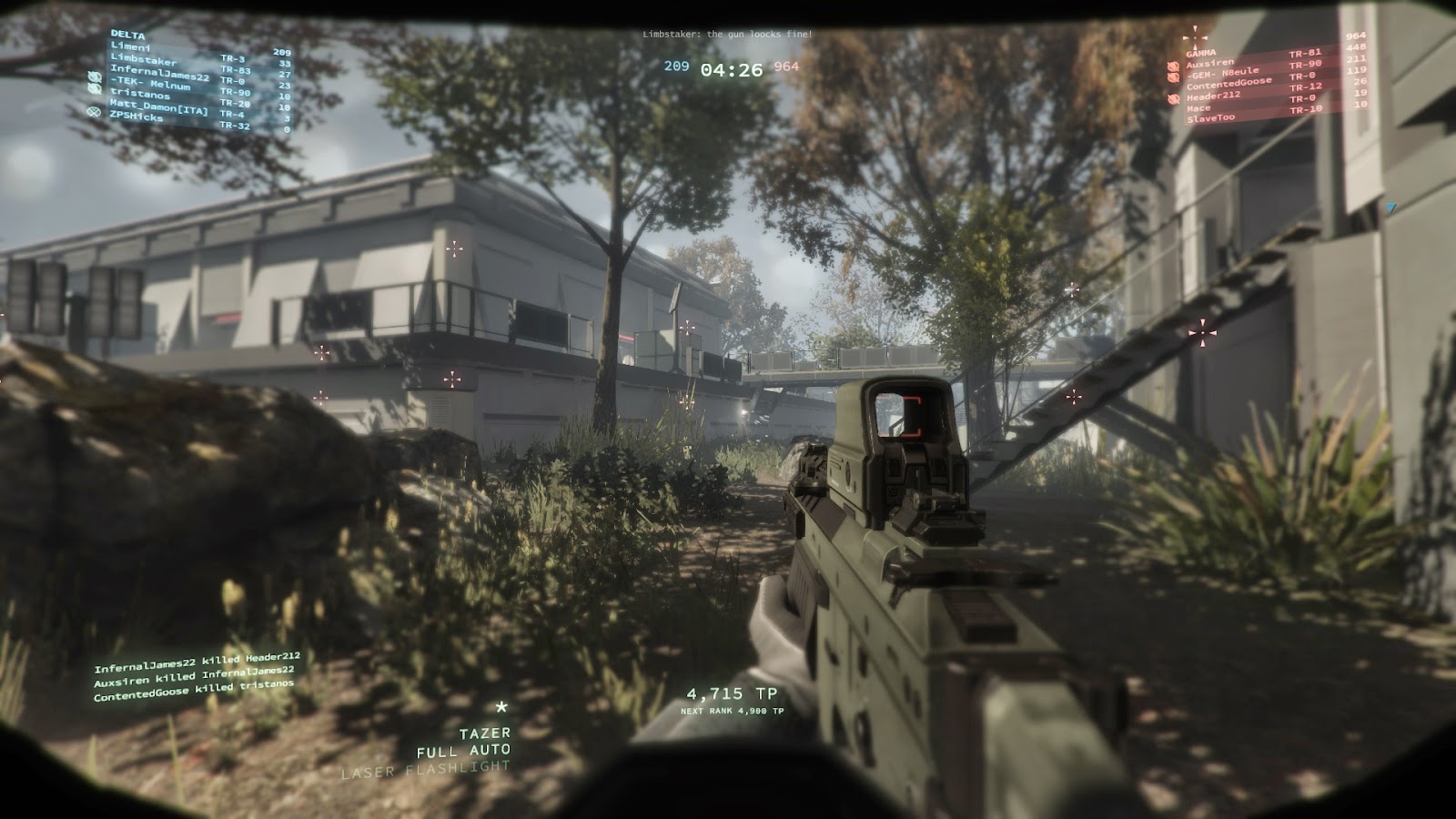 Yes,
there were some out there unwilling to change, Half Life 2 and its
Episodes, CounterStrike / Source / Global Offensive and Team Fortress 2,
all built on the Source engine that dates back to Quake’s id Tech 2
engine. These holdouts to the classics are all massively popular in
their own ways, growing professional esports leagues and local cult
tournaments alike. In recent years, revisiting features that made gaming
what it is today is a more common practice; studios and publishers are
doing their best to eke out every last penny from their fans and if that
means re-releasing a gussied up version of a 25 year old game, so be
it.

Smaller Indie developers are taking a different route; they are
picking apart what it is that we actually loved about those titles and
are focusing solely on those features, working to bring back some of the
nostalgia without capitalizing on our feelings and the need we feel to
feel younger as we age. That is where Interstellar Marines comes in;
taking a step back from this CoD / Battlefield clone-filled
genre, Zero Point Software has worked diligently to bring back
team-oriented tactical gunplay while adding little RPG-like features
throughout a non-linear game. Some throwbacks to classic genres can end
in disgrace while others can glow brightly as the best in the genre, so
how does Interstellar Marines fare? 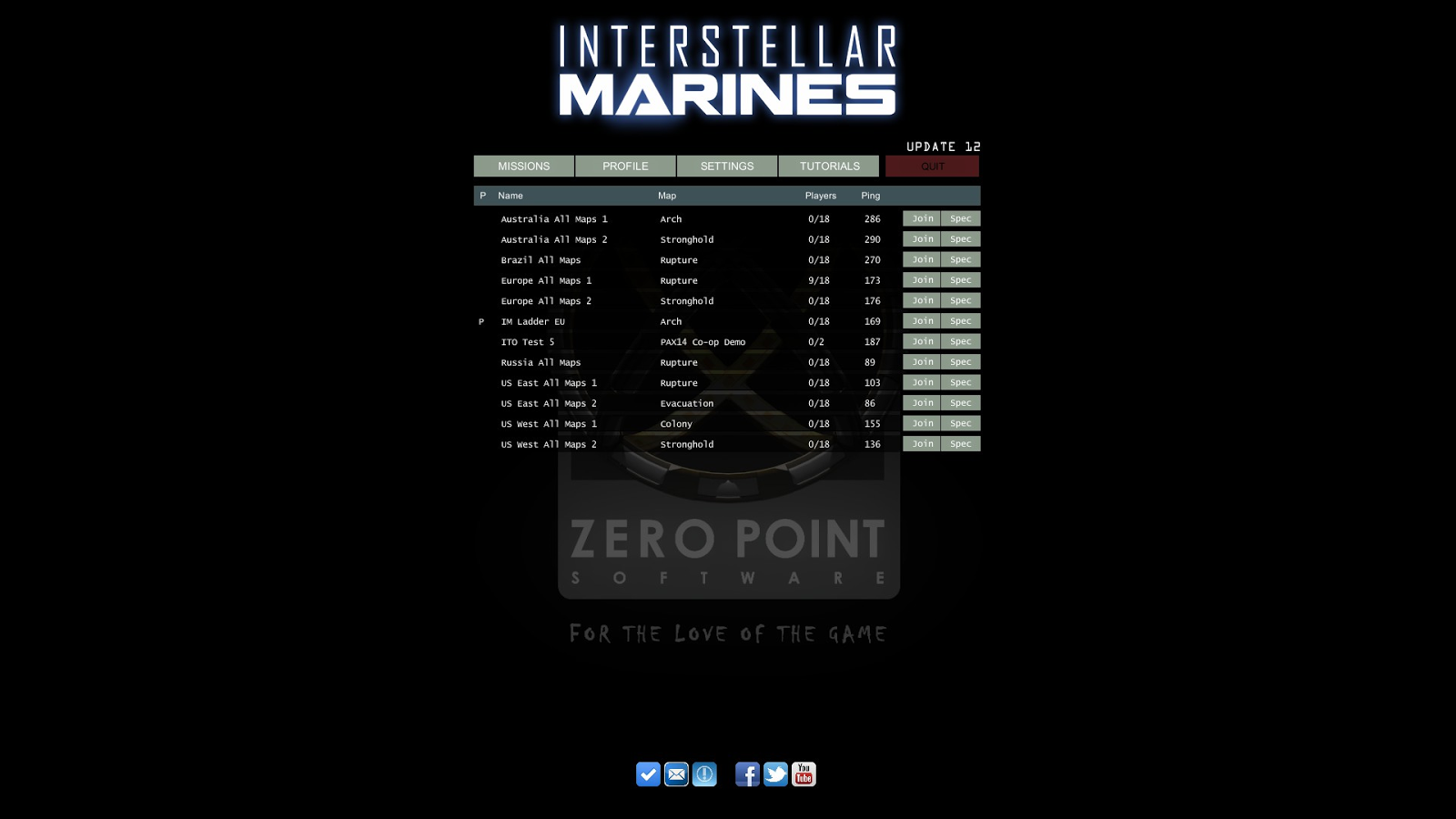 For a title that has sold over 100,000 units, nobody plays Interstellar Marines. Ever. I have started up games only to wander around for an hour and have 1 person join only to have them quit right away. Here is a screen shot from a mid-saturday (peak playing time, where Steam’s homepage showed 6.5 million gamers online) and that is indicative of every single day that I have attempted to start jump in. For having sold so many copies there is nobody here and that concerns me. Greatly. I managed to jump into a few games, one with a handful of Brazilians, two games with Russians, and two games on the European servers. Never once did I get into a USA-based game and playing with a bunch of folks that you cannot communicate with is difficult. Very difficult. And not fun (as anyone that has played Dota 2 or League of Legends …). I believe that Zero Point Software is aware of this little issue since they have been rushing to push out bots, and have such released a ‘beta’ for the bots that must be run through a different executable, which is very odd in my opinion.

Truthfully something about this whole production is just “off” and I am hoping that it is due to the early stage of development and not due to some sort of shenanigans by the developers. Starting up the executable to run the box is an exercise in patience, even more so than any Souls game as it is not a ‘structured’ game the way that multiplayer is. Instead you have bots that fill the empty spaces on the roster that simply run around looking for you and since it is not a structured game, you simply ‘drop in’ to the map and within a moment, maybe two, you are immediately killed. Which brings me to a bit of a bonus, or high-point if you will; one shot, assuming it is a well placed shot will kill you and bots always make well placed shots. So the way it will go is you will start the map and the bots will already be running around and when you “click to spawn” you have a short drop and then you are shot in the face. Rinse and repeat enough times and you will be spawned to a spot that the bots may not be in and you may be able to get a shot or two off (without killing anything) only to be shot in the face again. 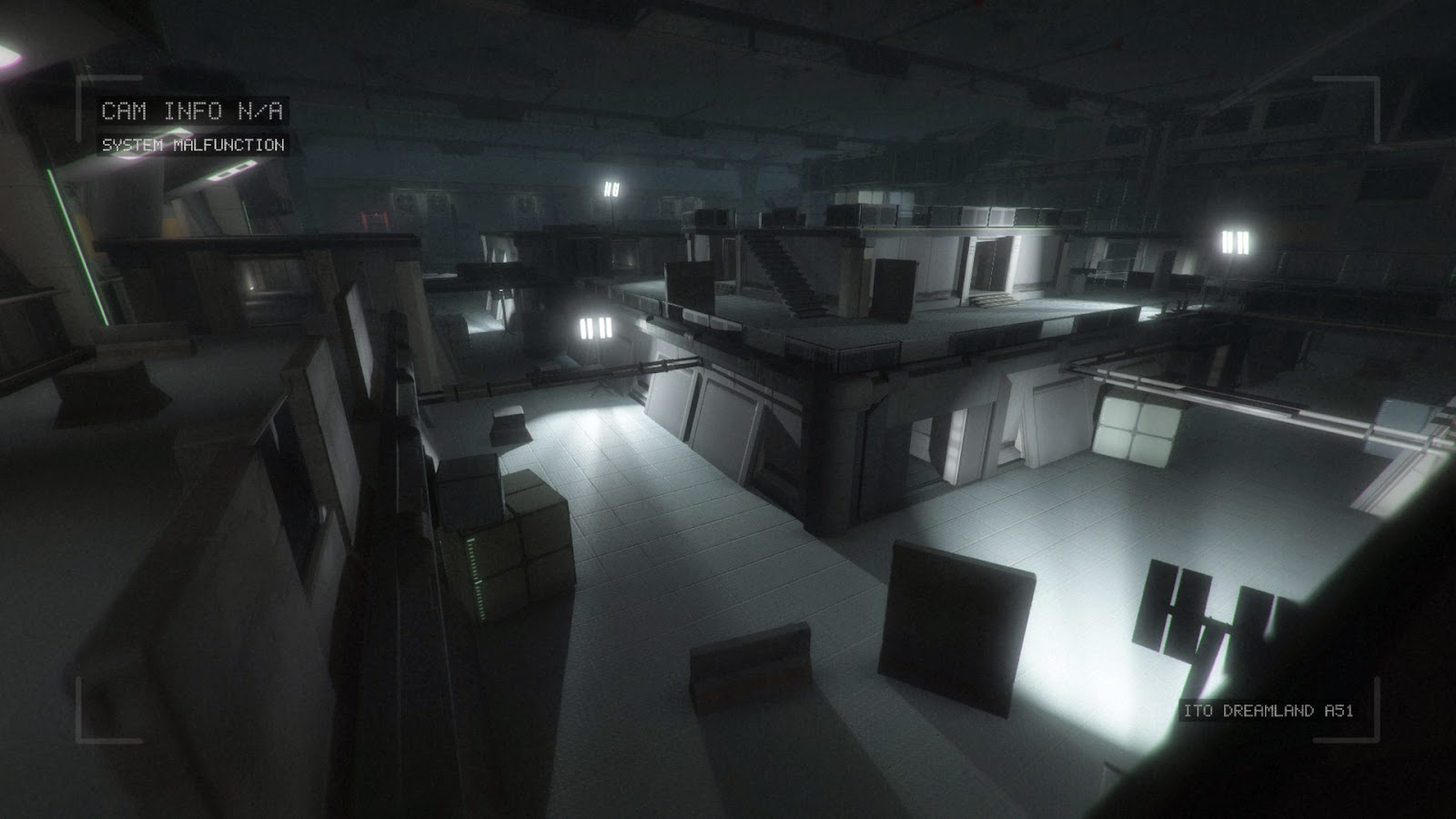 If it was a structured game it would no be so frustrating, but because it is literally drop-in-and-get-shot it is completely broken and a fairly terrible example of AI. I was disgusted enough that I had to turn away from the game for a few days in hopes of finding some multiplayer servers that actually had real people in them. I was unfortunately wrong. I am only hoping that as the game nears completion more and more of those 100,000 copies are fired up and more players join the fight, because as it is this game is dead before it launches.

While the back end of Interstellar Marines is leaving a taste similar to the Alien: Colonial Marines game when it first launched in my mouth, I do want to say that graphically Interstellar Marines is unique. I cannot say that it is groundbreaking, just unique. The misty atmosphere combined with some excellent shading and lighting build a very creepy atmosphere. What breaks it is the relatively odd looking character models that have some really stiff and “floaty” animations. Character models look to be ripped straight out of some of the higher-resolution fan-created models from Counterstrike Source (seriously, head over to GameBanana and look at some of the high-res CT skins, you are bound to find one that looks just like the models in Interstellar Marines. Movement from a first person perspective is actually really nice; it feels solid, grounded, but when you are watching others they just sort of float and skim across the ground, almost like they are ice skating and it breaks the continuity so bad it is physically jarring. 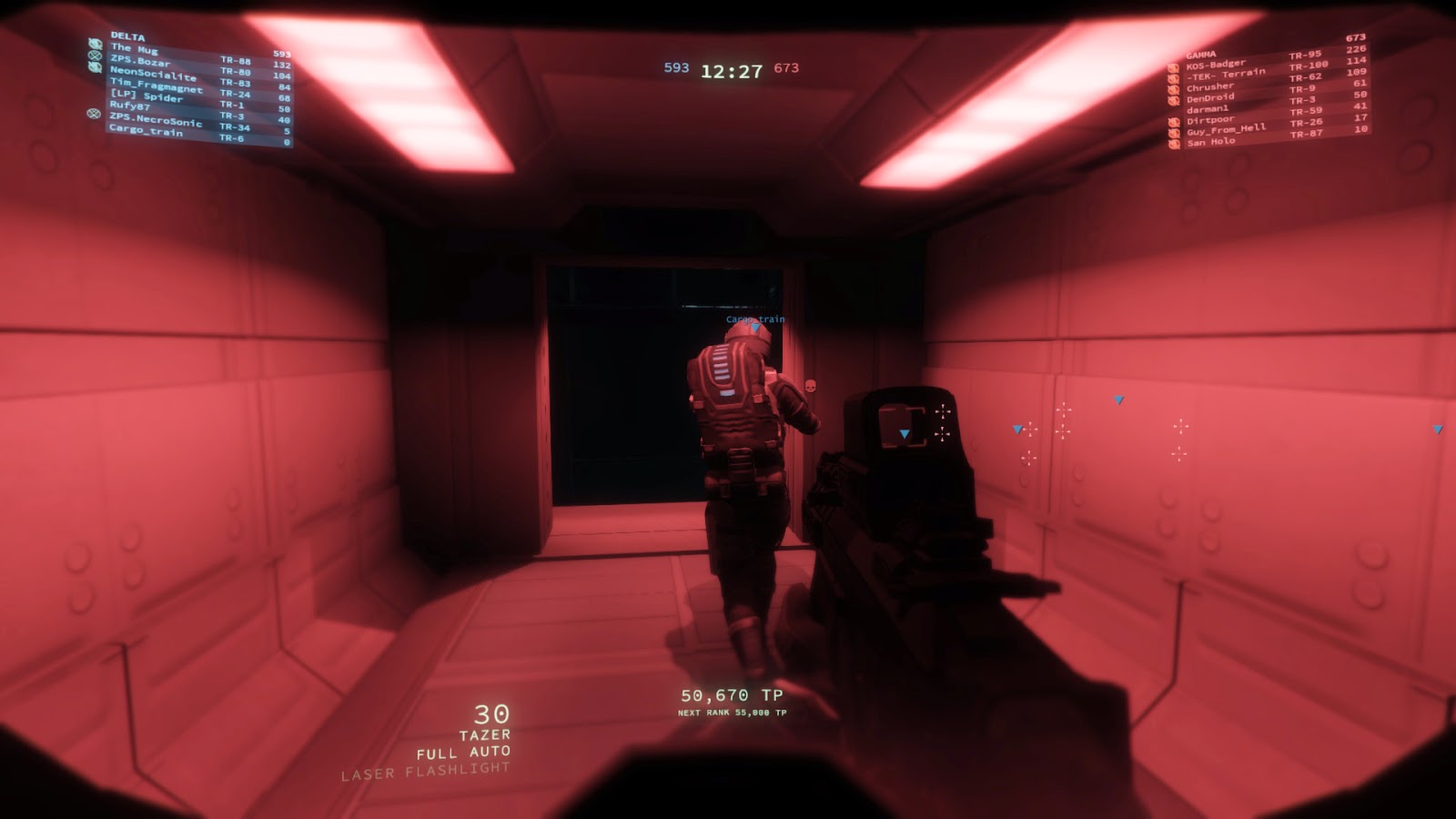 Zero Point Software is doing a lot to point out some features that are unique, specifically audio. Each model has a helmet that can be put on or taken off, though I have yet to truly determine why, and when you are firing with the helmet off, the audio is louder; when you put the helmet on the audio is quieter. While it is a neat little gimmick it feels just like a gimmick; something that is neat but not necessary and they seem to be pointing out these little features. One by one they are impressive and neat, but as a whole they add up to just a general experience that most players will not even notice; I certainly did not until I went back and spent some time reviewing videos on Interstellar Marines’ website. Like I said previously; something just feels off about this game.

I struggle with Interstellar Marines because it is a game that is after my own heart. Zero Point Software is boasting features that are a big part of why I love the FPS genre but so far I have not been able to actually enjoy those features. Lack of players in their servers, utterly broken bot-combat that feels extremely rushed, and bizarre little features that do not yet have a purpose. Since Interstellar Marines is in Early Access it could very well mean that this is just a really rough build and is more of a ‘proof of concept’ build than any sort of cohesive title, I do not know. I can only call it as I see it and as I see it, Interstellar Marines is a really pretty walking (or dying) simulator with guns. In all fairness, the bots portion of the feature is literally filled with warnings that this is early access and that they are looking for feedback and the same goes for when you start up the regular “game.”

Right now though, there is not much “game” here and I am desperately hoping one shows up soon. One where real people will also show up, because Interstellar Marines has the look to be amazing shooter with just the right amount of throwback to classic greats to be a whole new breed of shooter but until that time, this is a title to watch as it continues to develop. 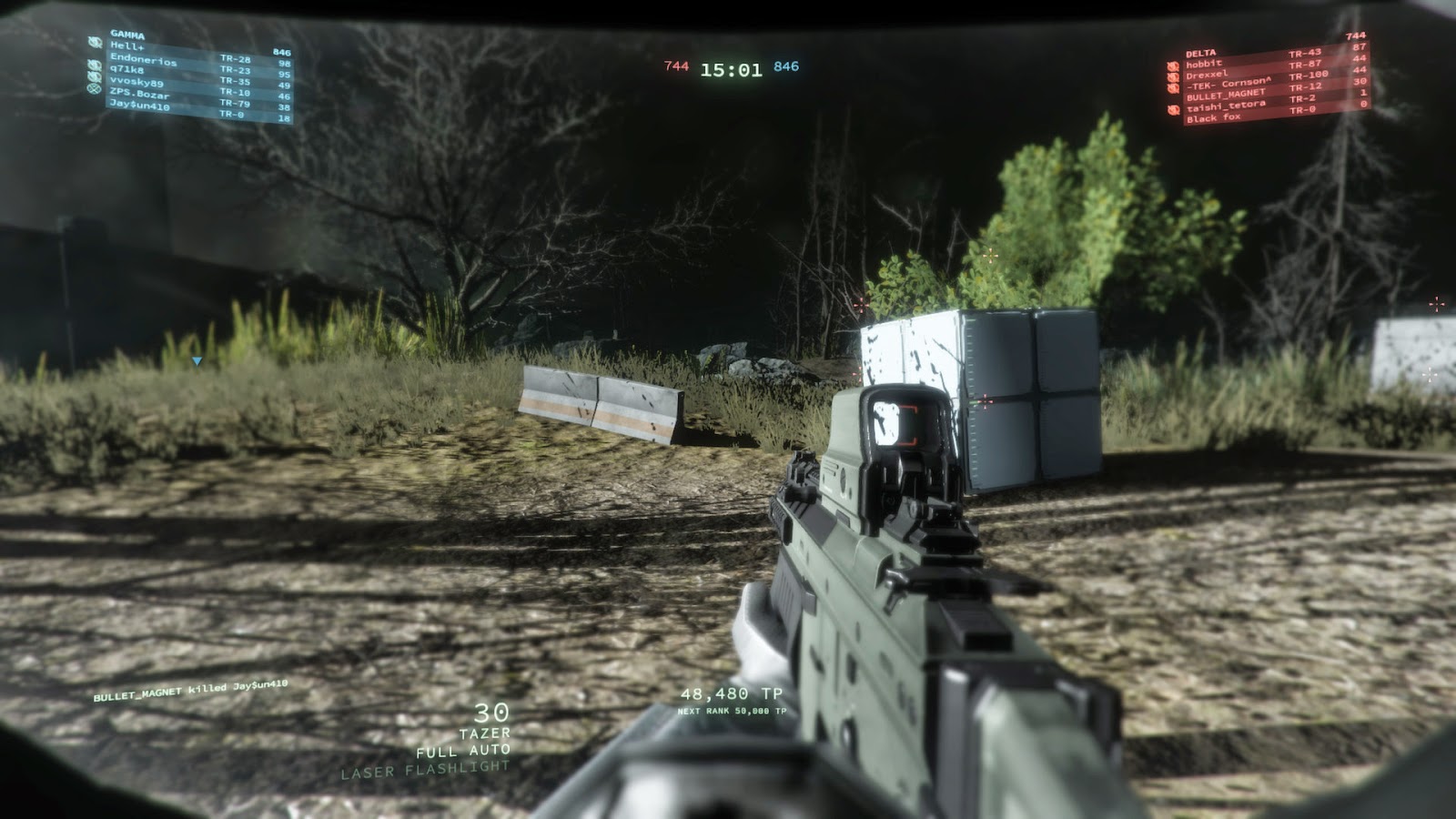