comments Share
You are reading
Metro Redux – Xbox One Review

So I am a bit of a scaredy cat when it comes to horror games, movies or other spooky mediums (though I am a massive fan of Halloween …) so when survival horror games, or just genuinely creepy environments, appear I tend to shy away and / or skip them all together. Unfortunately this means I have missed out on some truly spectacular games and as such feel a bit more obligated to pay extra close attention when a title comes my way and has a creepy/scary factor level over 9,000. The Metro series is a cross between a survival horror (and that is in the lightest sense of the word possible) and a genuinely creepy and difficult first person shooter. 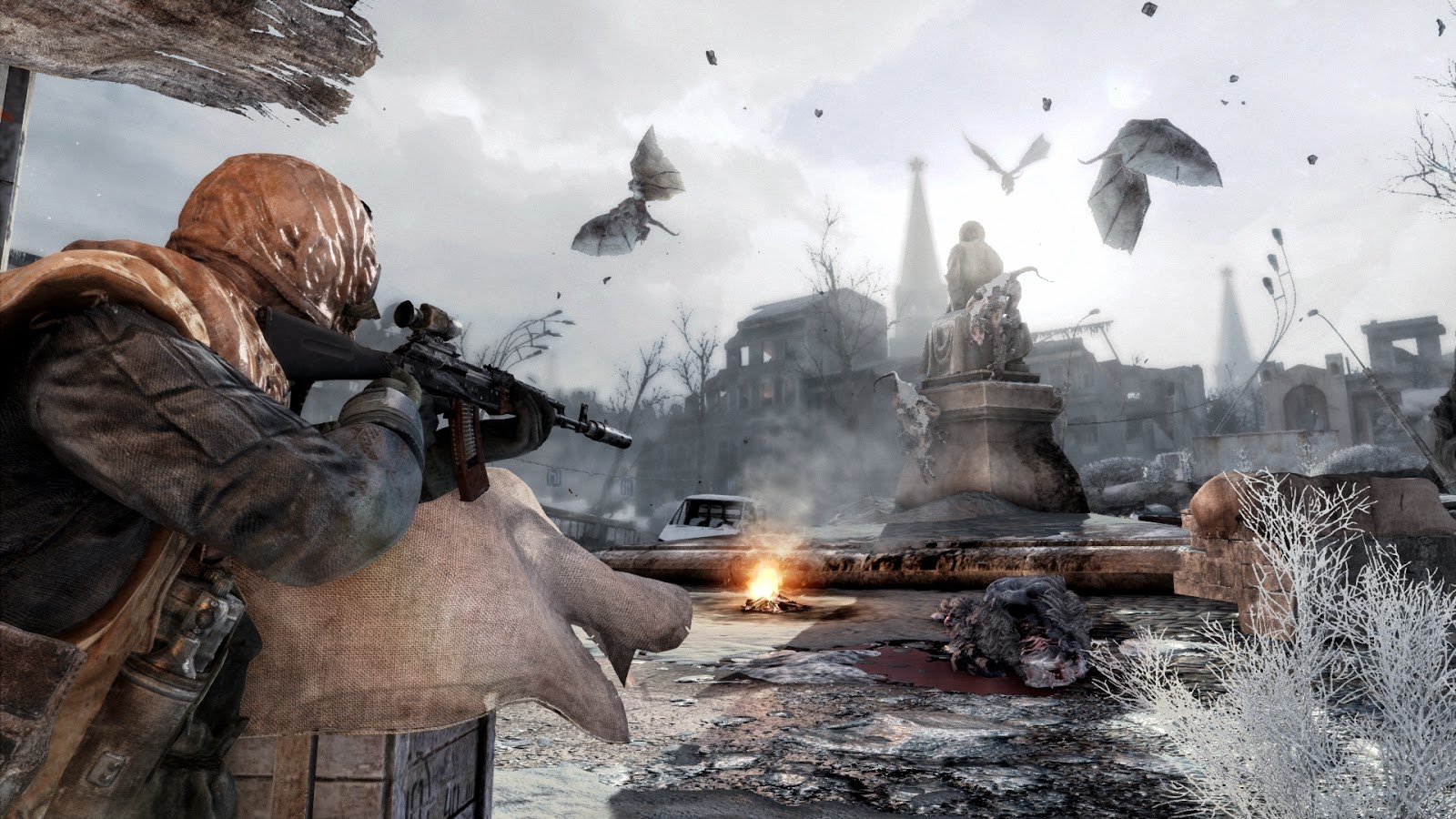 Prior to Metro: 2033, the last “scary” game I played was F.E.A.R.
back about a trillion years ago. Scary games just aren’t my thing, but
first person shooters? I am down for a round or two; I enjoy them and in
most FPS titles I find a lot to like. My first introduction to Metro:
2033 was a year or so ago when I picked it up in a Steam sale. I played
around for a bit, up until the eerie quiet was ruptured by the screech
of some deformed thing, then I was spraying and praying and dying. It
was freaky. I had not touched it since and when Metro: Last Light was
released I did not pick it up; after scary game sequel? No thank you.
Well, Metro: 2033 Redux and Metro: Last Light Redux came across my desk
as they were released and I decided I would give it another go.

A bit about Metro: 2033 Redux first; when it was originally released, graphically it was a great game for its time but things have changed and hardware is far more efficient. On the XBox One, Metro: 2033 Redux looks the same yet like a completely new game. The shading, lighting, LoD, everything is top-notch and works to create a super creepy, often terrifying alternate world where life is reduced to living in the subway system due to mankind’s need to destroy not only itself, but the world around. As the game unfolds you will spend a significant chunk of your time down in the tunnels, but occasionally you will be able to head to the irradiated surface and forage for goods or items and it is those few times of heading topside that are really very unique. 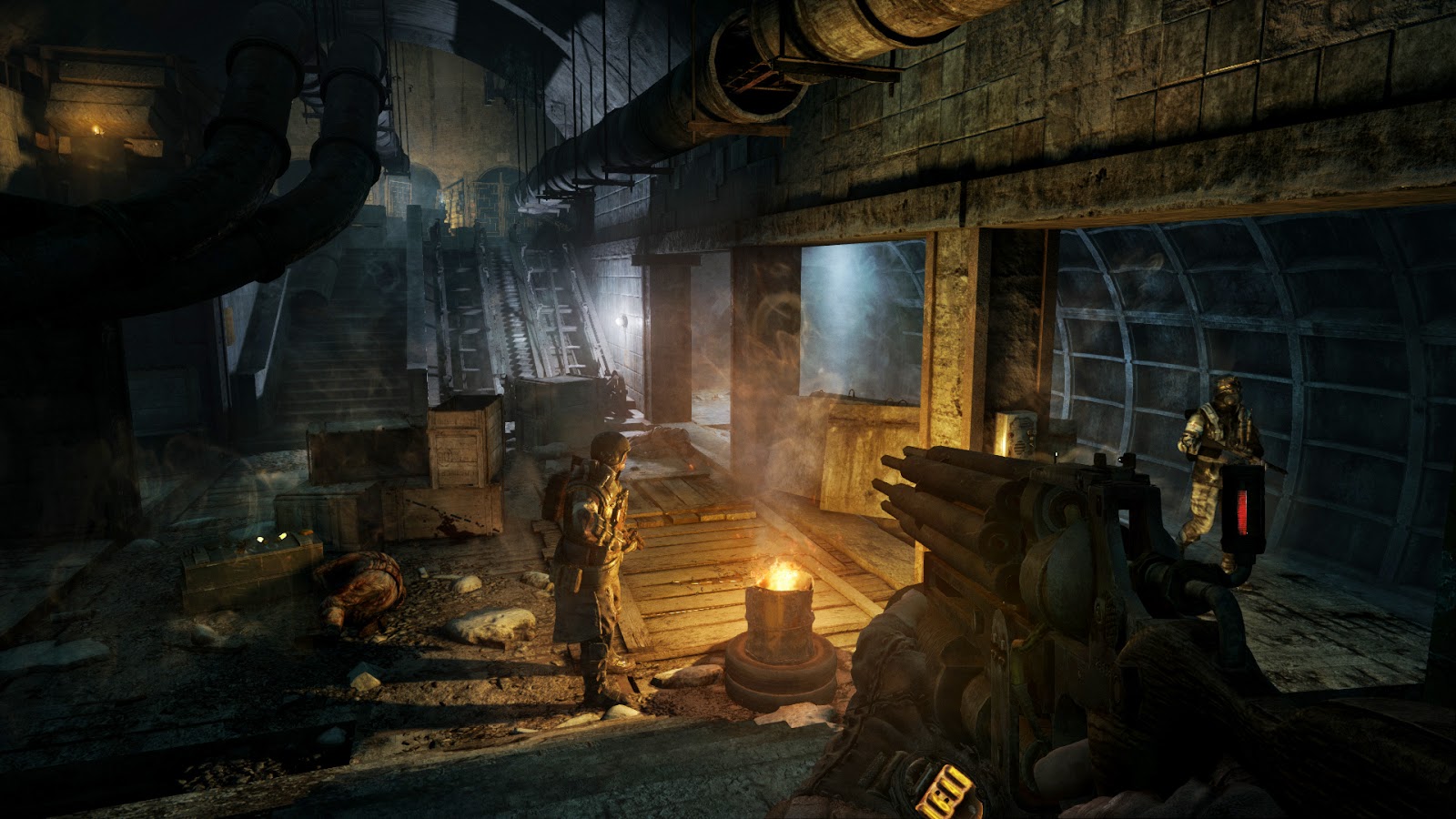 The first time or two you head up the game takes it easy on you but as the game continues you will be traveling topside, which is dangerous during the best of times, during a terrible blizzard or in the dead of the night. It really is a nail-biting experience and it is played off so very well. With Metro: Last Light Redux the difference between the graphics from the PC and the XBox One are less noticeable but the framerate has been improved and the particles floating throughout the musty air seemed far more pronounced (and better looking). Lighting seemed to be improved though that may be due to the improvements in the framerate; all told, Metro: Redux is a fantastic re-released title.

I will be upfront about the audio; after the initial experiences with the original game (which had excellent audio mind you) I did not spend much time in game so I will not be able to do a pure comparison to the old version, though I do not think it is fair to compare the old to the new; they are synonyms of one another, not just upgraded copies. I fired up Metro: 2033 Redux and the familiar haunting tunes, screeching ambient audio and guttural Russian language all wrapped up into a wonderfully horrific package. I personally switched the voice acting to Russian because it feels far more authentic and it is also fun to try to pick up on words that you may know (I took a number of years worth of learning the Russian language; it is a fascinating language). Sound plays a fairly important role in both games, though I found it a whee bit more important in 2033 than Last Light. 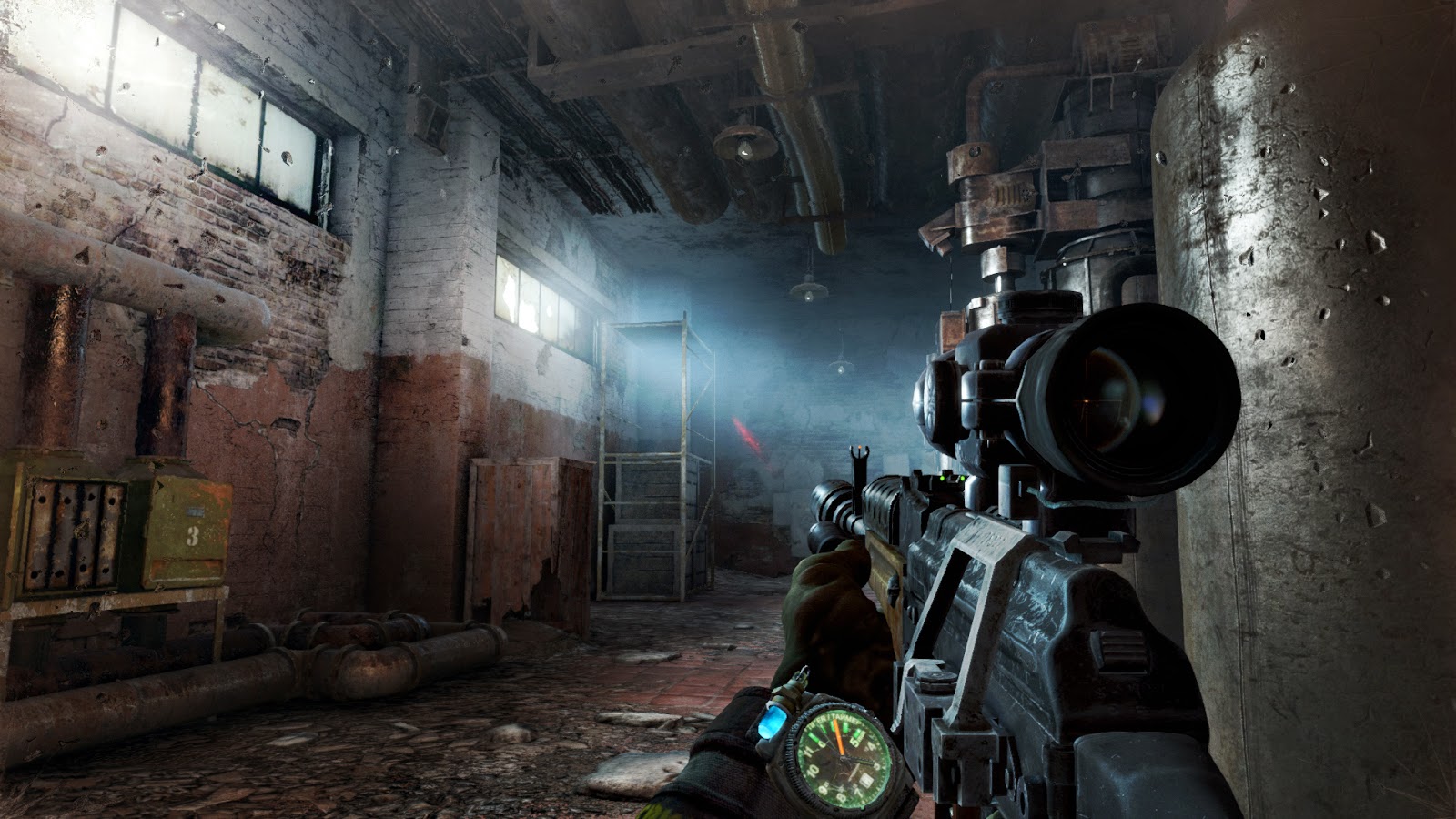 Not because there is some sort of game revolving around audio, but because 2033 is far more of a survival horror game than Last Light. I crept along in 2033, putting suppressors on my weaponry (shotgun with a suppressor? Yes please!) and literally crouching my way through the game as slow as possible. With Last Light it was a bit more of a running gun fight, which was welcome, and the explosions and tinging of the fired rounds off of the abundant metal surfaces in the area and while some of those hold true in 2033, the absence of some of those features (or rather, the muting of far off explosions and rounds pinging metal surfaces) is what really drives home the desolation and despair that you find in 2033; with Last Light you find a little hope, or rather a resistance to the despair. Not with 2033 though. It is a downhill ride and it is going nowhere good and you can feel that deep in your bones. Partly due to the awesome audio, partly due to the great visuals, and partly due to the wonderful story.

There are a lot of neat little features of the Metro games; from the need to use a gas mask and that you need to maintain your filters and cannot dilly-dally, to the need to be very sure about where your shot is going since ammo is extremely rare and spraying and praying is the worst thing you can do. I actually found myself knifing my way through an FPS game just so I did not have to use my weapons. Silly, yeah, but it made me rethink the way I play and that is good. Simply ‘going through the motions’ is ridiculous and if you wanted to just ‘go through the motions’ then you may want to fire up that good ol’ copy of MS Paint; the Metro games will challenge you to think outside of the box and that is a refreshing change for the FPS genre in this market that is over-saturated with modern combat games. 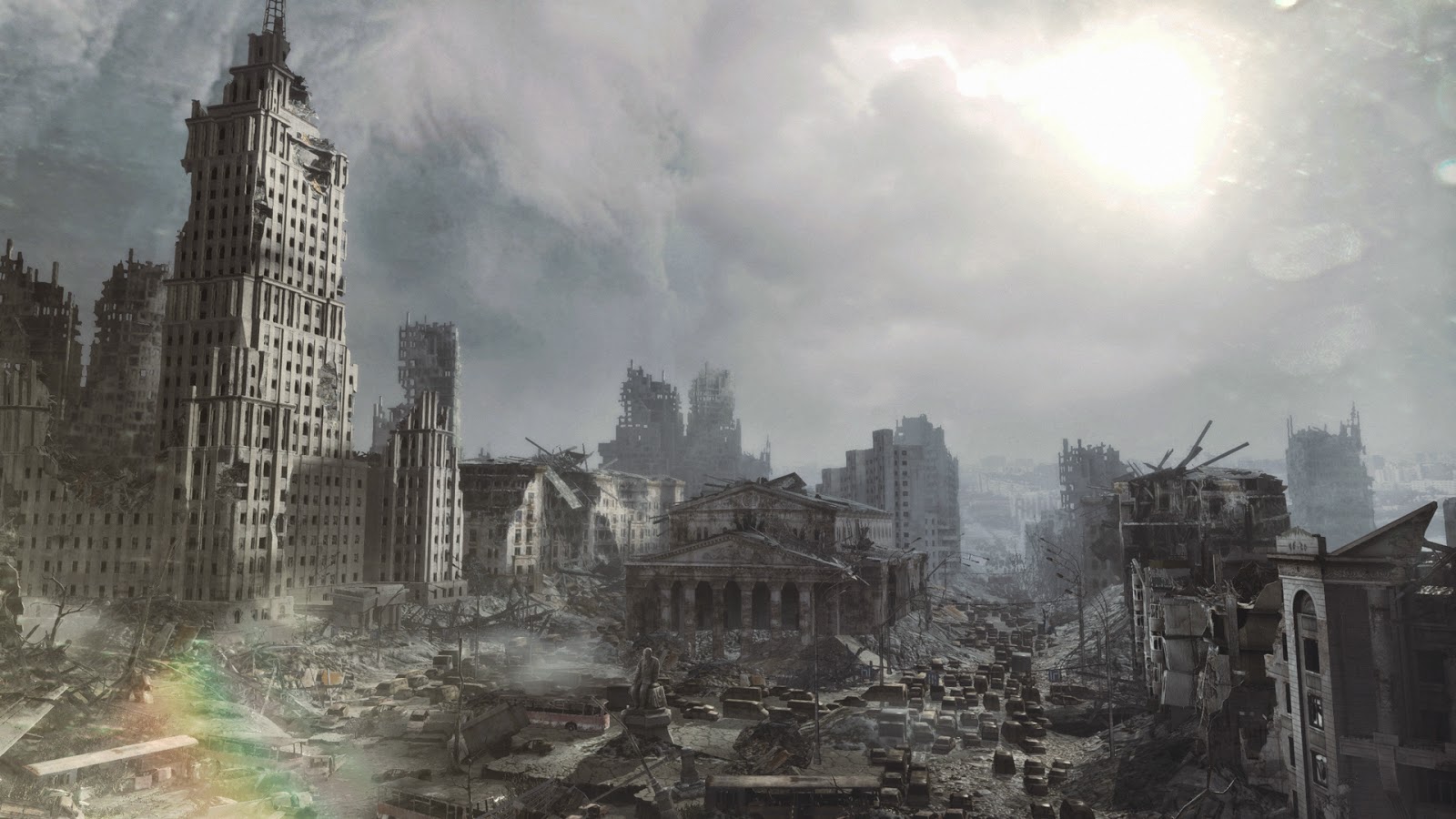 While the Redux package changes up some more basic features (like AI difficulty tweaks or usability changes), the real winner of the package is the complete retooling of Metro: 2033, adding a completely new mode to the game. Where Metro: 2033 was originally a survival horror FPS game (and still is, if you choose to play that way), you can now play it in a mode which resembles the much-more action-packed style of play that Metro: Last Light enjoys. When I saw that there was a new more action-oriented mode which made medpacks and ammunition far more abundant and combat more traditionally oriented. Now, some of you may just claim I am a baby looking for the easy way out, but that is not the case; I love a challenge, just check out any of the numerous Dark Souls 2 articles we have here. Instead of just taking and adding more ammo to the game, they tweaked the AI to behave a little differently, more aggressive, more powerful, and really, more fun (to me). I was overjoyed with the new mode and would go back and play it any day of the week.

After my initial experience with Metro: 2033 on the PC, being the scaredy-cat that I am, I would not have gone back to the franchise. Ever. However, when I caught wind that the Redux would have new game modes, allowing a more traditional feel, I was immediately hooked. Now, after playing the campaign twice through on the Spartan mode, I can say that I am a fan. Honestly if another were to release tomorrow I would be at the store within the week and would play the title to completion time and time again, scary game or not. The Redux bundle, for all intents and purposes, saved the franchise and so much more. It is not that the older games were bad; not at all. They were just old. The Redux bundle did everything right and brings some fantastic titles to the next generation, bringing with it old fans and new alike.