comments Share
You are reading
Minecraft: Xbox One Edition – Xbox One Review

Microsoft owns Minecraft.  At the time of this review, that is one of the biggest headlines in gaming.  It’s big news for sure, but the biggest question is “why now?”  Minecraft is B-I-G.  It is arguably the most popular single game for my kids’ generation.  Any time my kids meet someone new, the first question is “Do you have Minecraft?”  And the answer is always “yes”.  And they aren’t the only ones.  There has been some amazing work done in Minecraft with entire communities building epic recreations of fantasy worlds, working computers, and works of art.  It is truly a cultural phenomenon.  From that perspective, you can see why Microsoft wants it.  They want their name associated with it.  And more importantly, they want to keep it away from Sony.  Which brings us back to the original question….why now?  Minecraft is already available on nearly every major platform already….PC, iOS, Android, PS3, Xbox 360.  If they really wanted to monopolize it, they should’ve done this along time ago. 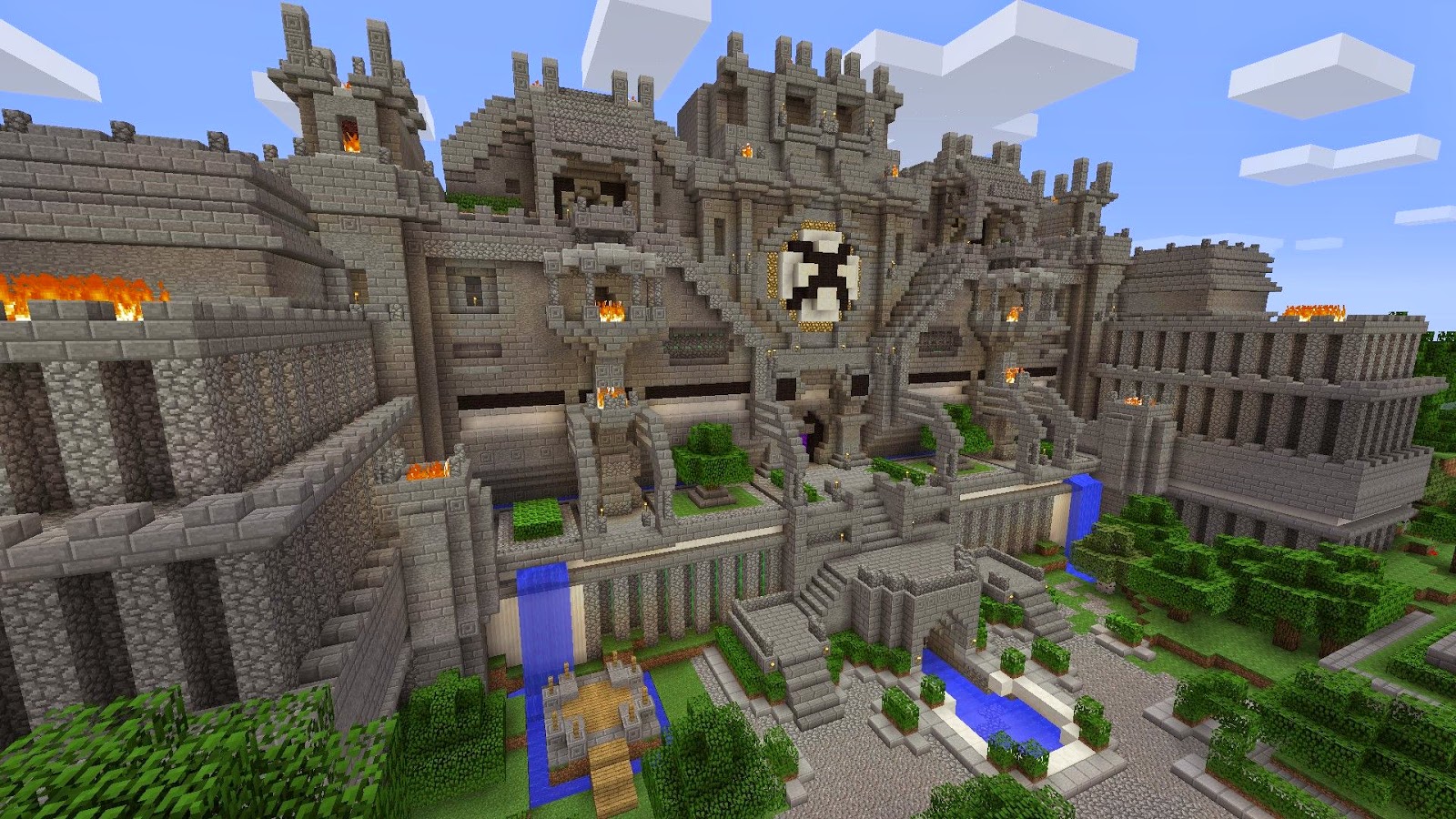 Just before the announcement, though, the game finally moved to next-gen.  Yes, Minecraft released for the Xbox One (and PS4).  It was inevitable, really, but how is it?  I’ll admit, this is the first Minecraft that I’ve played.  But just because I hadn’t played it yet, that doesn’t mean I’d been able to avoid it.  My kids play it on PC, Xbox 360, and tablet.  One was a Creeper for Halloween last year, and another built a Creeper pinewood derby car for Cub Scouts.  They have the toys and cardboard papercraft blocks, even Lego sets.  Minecraft is everywhere.

Is there anyone out there that doesn’t know what Minecraft is?  Well, in case you haven’t heard and want to know what all those darn kids these days are talking about, here is it is.  You mine things and you craft things.  Just like the name!  The environment is completely destructible and is there for you to break down and build back up.

Break down some trees and some stone and build a pickaxe.  Use your pickaxe to mine stone faster.  Build an axe to chop down wood faster and a shovel to carve up the dirt.  Mine, chop, dig, mine, chop, dig.  As your raw materials grow and grow, you can start combining them, or refining them in a furnace.  It is pretty amusing to hear my kids talking about how to make glass or steel or other elements because, while simple, the “recipes” aren’t far off from the truth.

And once you have the materials you want, you are truly limited by your own imagination and time.  I hear people frequently describing the game as the ultimate Lego game.  The comparison rings true, but in a way, it also reminds me of the Sims.  When I’ve played the Sims, I generally care very little for the actual people and their jobs and all that.  It was building and furnishing the house that sucks me in.  I get that same feeling here.  The interface is simple enough that you can be building basic structures very quickly and keep expanding and expanding. 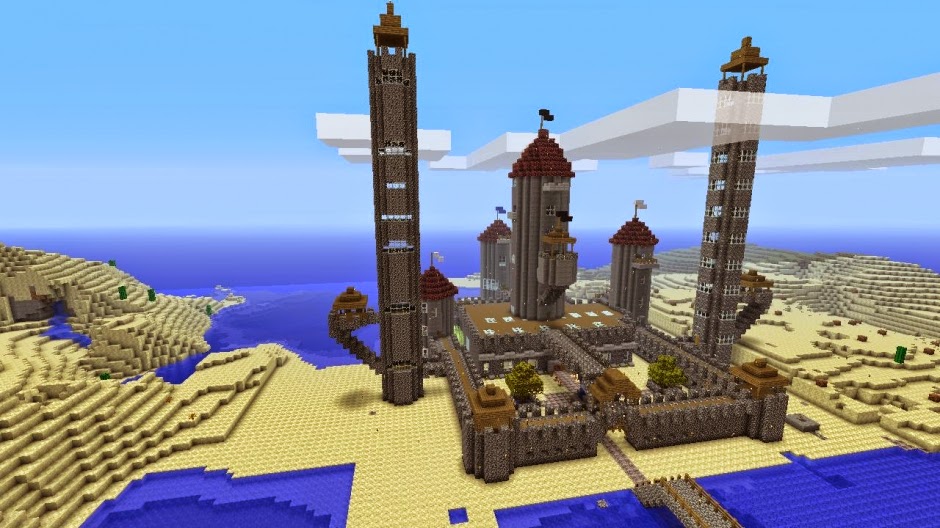 It starts with getting a few basic walls up to keep out Creepers and the other monsters.  Then you add some windows here, some stairs over there….dig out a basement with torches on the wall.  Add a moat and a turret.  Dig some passages into the side of that mountain.  Pretty soon, the hours have flown by and you can’t wait to show people what you’ve built.

Want to build the world’s coolest treehouse?  Go right ahead.  Want to build an elaborate cave system or a home worthy of a hobbit?  No problem!  Massive castles, skyscrapers, or cities?  Just need the time and a plan.  Or skip the plan and just build one thing at a time as inspiration comes to you.

It is easy to see why kids like it.  It scratches the same itch as building sandcastles or snow forts.  And you don’t have to be “good” at it to enjoy it.  In a way, it is the truest “open world” game there is.  You can do what you like when you like and where you like. And if you don’t want to worry about hiding from monsters at night and just want to build, play Creative mode.  I don’t think my kids play anything BUT Creative mode.  It isn’t just for kids, though.  I’ve seen some VERY impressive worlds built by adults.  If you want to see just how creative people can be, just hit up Google and prepare to be amazed.

So that is what Minecraft is.  A fun little sandbox game that really lives up to that name. If I had to describe it in one word, that word would probably be “play”.  You can just play.  Run around, build a few neat things, build something goofy, or build something epic.  It is up to you.

But how is it on the Xbox One?  If you don’t already own it on another system, the Xbox One is a good place to start.  The graphics look great (as great as the art style will allow), worlds are much, much bigger, and it runs very smoothly.  If I had one complaint about the interface, it would be that the inventory screens could use to be bigger; they feel unnecessarily small.

If you own the Xbox 360 version, it is only $4.99 to upgrade and you can import your worlds, which was a pleasant surprise.  I wasn’t expecting either of those things and I’m glad they went that extra step.  That is one thing about the newest generation of consoles that I do appreciate.  While they aren’t backwards compatible, a lot of publishers are offering low-cost upgrades to users that own an older version.  I don’t remember that happening much in the Xbox-to-360 or PS2-to-PS3 days. 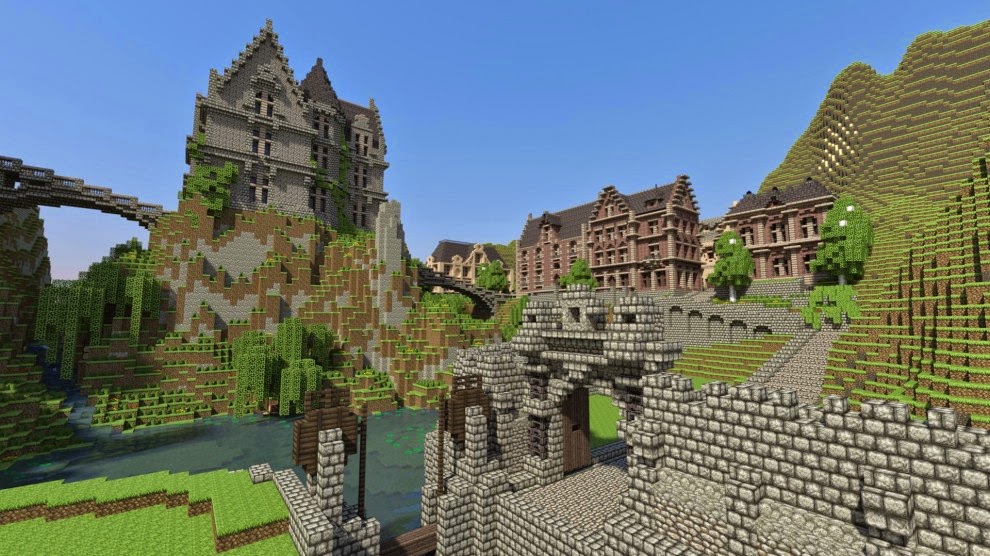 The ability to import your 360 worlds is also appreciated.  In a game like this, you could spend a significant number of hours building a massive world; it can be hard to say goodbye.  I could see a lot of people sitting on the fence wondering if it was worth upgrading with so much invested in the previous version.  The ability to bring your worlds with you is a great way to entice those folks into upgrading.

So now that I’ve finally joined the mainstream and jumped on the Minecraft bandwagon, what do I think?  First off, I really appreciate what it is and what it lets you do.  If you have the time and the imagination, you really can create something amazing.  But that is also why I don’t think it is a game that I will be coming back to.  I liked being able to build my little structures and craft all kinds of neat weapons and tools.  And I really like the thought that if I really want to, I can build myself a perfect-to-scale replica of Minas Tirith with Hogwart’s on top and the Indiana Jones minecart track running through the inside.

That.  Would. Be. Awesome.  And you could totally do it.

But when I think about actually sitting down and DOING something like that, I end up demoralized.  Because that’s a lot of work.  And a lot of time. To build a masterpiece like that, you really have to map it out and plan it out ahead of time. If you don’t get the width just right, you can’t just lift the whole thing up and move it.  You’ll be knocking big chunks down and building them back up.  And then build, build, build, build.  That starts to feel a little bit too much like work.  Ugh.

And then once it is built?  You can stand back and admire it and show it off, but there isn’t really much more to do with it.

But if you don’t let your lofty ambitions get it the way, it can be a lot of fun to reshape the world for a few hours here and there.  And that is why I think the kids love it.  They don’t have to build Winterfell.  They are just as happy to build a house with four small walls and then run around hunting the wildlife for some bacon.