comments Share
You are reading
Tales of Xillia 2 – PS3 Review

The Tales of … series. That statement alone yields awe, adoration, yearning, and a sense of wonderment that many fans of the series will feel; unlike the near-rabid fans of Final Fantasy or the stoic and cold fans of the Dragon Quest / Dragon Warrior franchise, the die-hards of the Tales of … series are unto a league of their own. I have been a part of a number of different circles, from JRPG to WRPG to RTS to 4X fandoms; I have seen a large portion of them, some good and pure, other ugly and petty (I admit that I fed into it at times, I think we all have). The Tales of … fans though, I honestly have not met a more earnest and helpful bunch; willing to share their knowledge and their passion in a warm and comfortable tone, never turning away a potential newcomer to the fold, and welcoming old friends back with no questions asked. The fans are, more than any other franchise, a near mirror image of the games. From the very first Tales of Symphonia, to the very latest, Tales of Xillia 2, every single Tales of … game has felt like an old friend that has come back home with a smiling face and a welcoming arm. 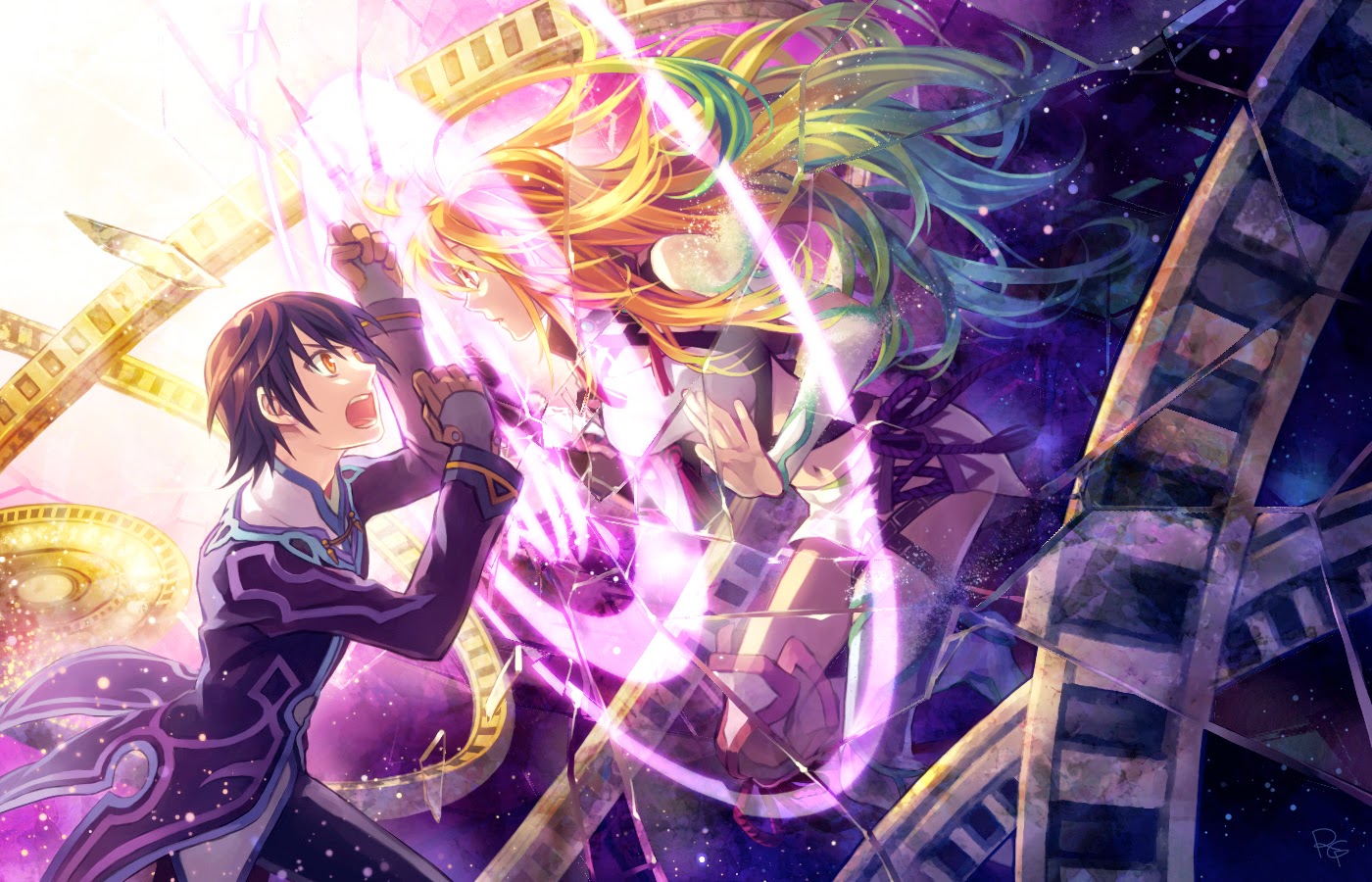 Each iteration has brought something new and exciting to the series or
barring that, built upon existing features, perfecting them each step of
the way. My first introduction to the Tales of … series was long ago,
before I really knew what the Tales of … series was (Tales of Destiny
back in ’97, though it was overshadowed by the juggernaut, Final
Fantasy VIII which I put a few hundred hours into). However, my first
digital video game for a console was Tales of Vesperia, a title I had
wanted to play since I first saw the ads for it and while it had been a
constant on my Xbox 360 hard drive, I kept putting off playing them.
Eventually I played it and was stunned that it was such a great game and
I could not believe I put it off for so long. I then began a hunt to
find every Tales of … game that I could and put it behind me. To this
day I have played a majority of the Tales games (for major consoles,
none of the mobile spin-offs) and have interacted with the extremely
large and very loyal fan-base and to this day, I am still amazed at how
the games, and their fans, are so similar. I do not believe I have ever
encountered a fan-base anything like what the Tales series has, though, I
may just be lucky. Does Tales of Xillia 2 hold true to its roots and
provide the same high quality and stunning adventure that its
predecessors have?

I was most surprised when I started up Xillia 2 and saw the opening sequences; most anime-inspired openings are drawn and animated at 15 frames per second and Xillia 2 is one of the first that I have seen where the drawn/animated openings and cut scenes are at 30 frames per second. It is impressive, really, and more than a bit heartwarming, after all I am a massively huge and extra big fan of anime so when I see cut scenes with high quality animation and motion I am in a little slice of heaven. As you run around Elympios, defeating beasts of all shapes and sizes as you grind your way to the top, you will find a wild range of colors, models, textures, and effects and it all fits. Whether it is the city hub you are running around in or you are investigating some ruins, Xillia 2 looks great. Simply great. I love the sharp style that each character has, some of my favorites being Milla and Elise, and the way that they evolve throughout the game is simply wonderful.

A part of the reason I am so attracted to the art style is because it is no different than what I would find in an anime and in my book that is a great thing. The special effects, more notably spells and the like, are flashy without being overstated and have a good clean appearance, but the real winner is when you perform your linked special combos as the screen darkens and the whole effect looks a lot like an anime fighting game; I do not know why, but I loved it. Every chance I could get, whether it was some mob trash enemy or a boss, I was performing these specials so I could see that whole effect and after a few dozen hours, it never got old. In fact, the art style for the Tales of… series, even after nearly 20 years has not gotten old and still, to this day, offers a quality experience. 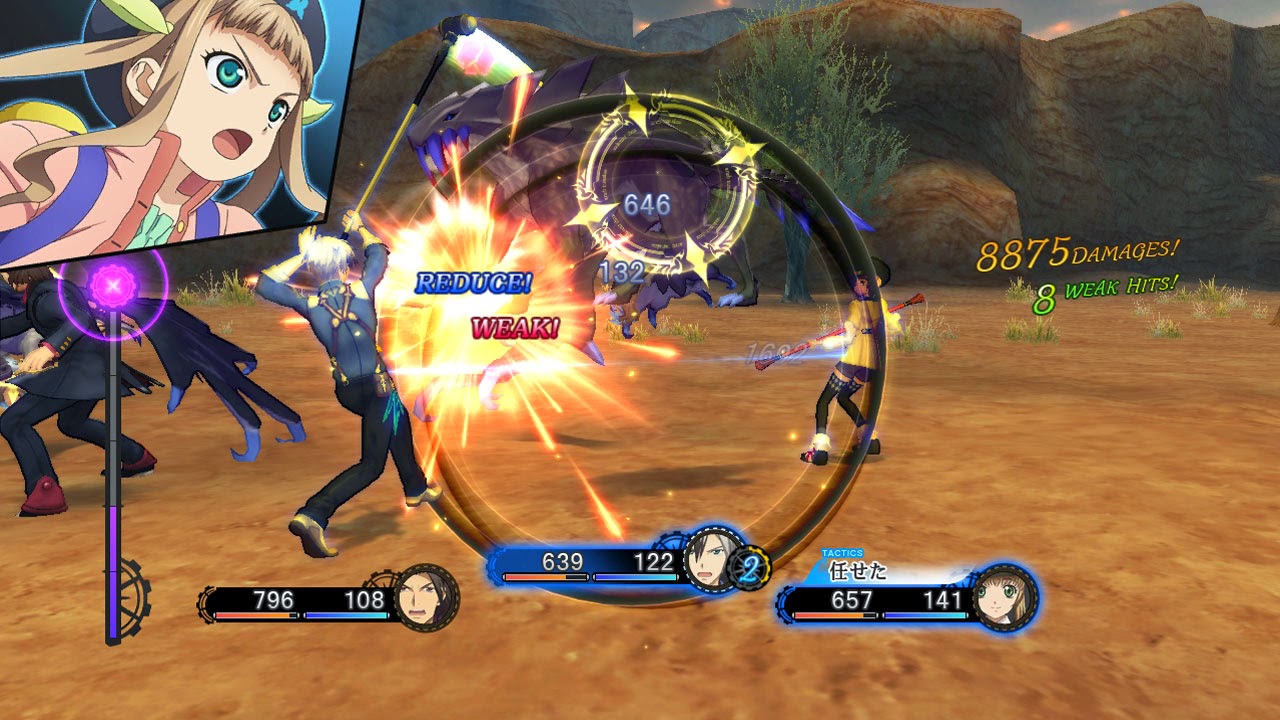 One place the Tales series has always excelled at was in the audio section; rarely offering dual audio (Japanese and English dubs), Bandai Namco has always ensured that the Tales series had the best of the best voice actors for their English dubbing and Xillia 2 is no different. While Ludger, the main protagonist, has naught more than grunts and sighs with an extremely rare line of dialog throughout the majority of the game, the others like Milla, Leia, or Jude all exhibit excellent voice acting. They are able to put real feeling behind their scripted lines and fortunately for us, they do not always sound scripted. The little skits that appear throughout the game not only give insight to the story and the people, but are done so well that they truly sound impromptu, however not to the level of Tales of Graces F (a title I hold in high esteem and feel to be the pinnacle of the franchise as a whole).

Ambient audio is also excellent, if a little quiet; I would like to see a bit more audio in towns and other hubs, not to mention more environmental effects moving forward. I generally comment on how audio is one of the most important aspects of a game (it is!) and Xillia 2, while more than adequate, is just that; adequate. At least, in the actual game it is just adequate. The beautifully made cutscenes have excellent audio and with a little more work could actually be a fully featured OVA all to themselves; the production quality for the story-driven cut scenes is through the roof. Slashes, spells, and other combat effects all sound in place and have no noticeable or discernible clipping or static and help keep the games audio at a comfortable depth, being not too sharp or not too soft. As mentioned a little more work on environmental audio would be a welcome edition, as levels similar to one at the very start, which is a racing train, just seems a bit two dimensional as there were relatively simple audio tracks in the background. Honestly it sounded very similar to the train sequences from Final Fantasy VIII (an underrated title that was actually quite awesome) and while that is not a bad thing, it is an old thing. Xillia 2 is a new and fresh title that has some older, or less optimized audio in some places; you can really tell which levels and areas the developers really liked and those others where they were simply like “Meh” and shrugged it off.

“Tales of Xillia 2 is a JRPG.” If that line does not sum up a majority of the experiences in the game then I do not know what would. You will have your atypical JRPG tropes in there, but more importantly you will have all of the features that make JRPG games so great. From underage heroes with awesome powers deciding the fates’ of planets to magic, outlandish skills, and a massive cast that has seen some better days; Tales of Xillia 2 has them all. I do not say this in a negative tone; I love all of these tropes and genre-specific traits, they are likely a part of the reason I feel the way I do about the genre (which is love and adoration). Where Tales of Xillia 2 deviates a little is in their Cross Double Raid Linear Motion Battle System, which is essentially a way to link characters and dish out the hurt in some very cool ways, and in my opinion, the biggest deviation from standard JRPG feature-sets, is in the ability to choose. 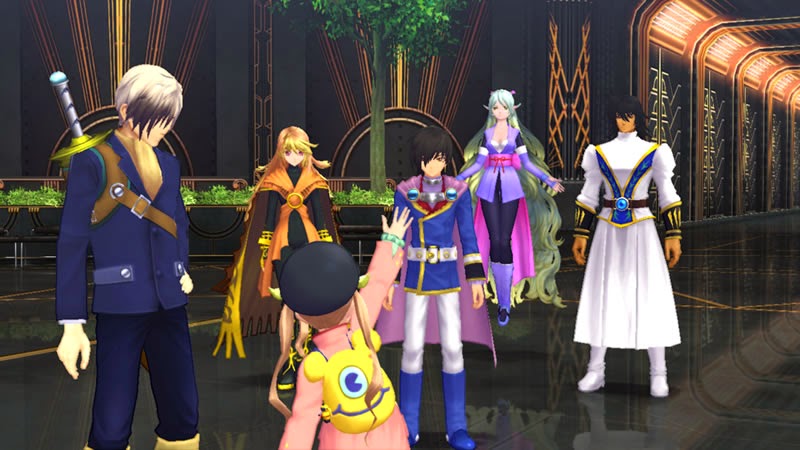 “Choice” has always been a big part of games, but less so in JRPG titles than in WRPGs like Mass Effect, Bound by Flame, The Elder Scrolls series of single-player games (not that abysmal hack, The Elder Scrolls Online, which I refuse to even see as a proper Elder Scrolls title, but rather some kid’s attempt to make a fan-made game, and failed… ) or Dragon Age, choice goes a long way. With Xillia 2 that is different. Completely different. Choice plays a huge role in the title and leads to some very interesting conversations between characters or, better yet, can alter the way the game ends; this means that Xillia 2’s replay value, which would be high to begin with, is absolutely massive. I intend on returning to the game numerous times so I have a chart sitting on my coffee table that contains the choices I made (which, to be honest, is a ton of work as there are a ton of options) so I can go back a second time and choose different options. On top of some neat new features, grinding, a staple in the JRPG family, is a big part of the game though it is not as tedious, given your ability to link with various characters (which then invites new dialog and new tactics for certain enemies).

I do not know if I can come off of Tales of Xillia 2 without sounding like a fanboy but honestly, I do not care if I do. The Tales series, and the Tales fans, have been some of the best experiences that I have had and the best encounters that I have had in gaming in the last twenty years. The Tales series has not had the massive emotional impact that some of the Final Fantasy games have had (looking at you, Final Fantasy X), at least, not in the same way. The Tales titles are enjoyable, light-hearted, and fresh as you play them but after you set the controller down the size and scope of the Tales series with eat away at you and you will realize that clever story writing and some amazing character interactions cleverly hide larger issues (like growing old or facing one’s own mortality) and then sneak up on you when you are not looking.

Tales of Xillia 2 is no different, dealing with issues like loss and failure, knowing your place in the world and how to confront your own life and the choices you have made; titles that really hit you in the gut are exceedingly rare and deserve a play through; you just do not come across titles like that every day. While some of the audio is sub-par for a Tales game and some of the interactions and directions that the story is taken can seem a bit second-rate or campy at times, Tales of Xillia 2 is a Tales game that I am proud to have sitting on my shelf. I enjoyed my time with Ludger, Rollo, and Elle and can only look eagerly onward towards the next Tales game, due out sometime in 2014/2015 (Tales of Zestiria) but for now, Xillia 2 will tide me over just fine.